An overused description in film reviews has someone giving “the performance of their life.” Figuratively speaking, the label is completely subjective as to what someone feels is an actor’s best role or performance. Literally speaking, the statement is impossible. The world keeps on turning, the actor lives and works on. Literal or figurative, “performance of a lifetime” is almost always an overstatement. This writer avoids it at every chance.

What Michael Keaton has done in Birdman frighteningly borders on making that overstatement actually come true, both figuratively and literally. In playing a washed-up former blockbuster actor famous for playing a superhero in the 1990s, the film could not have made a more appropriate, inspired, or ironic casting choice than Tim Burton’s original Batman himself. It feels eerily autobiographical. Keaton completely counts as a former actor who people forget can really act and seeks to prove to the world he still can. To everyone with a pulse, he’s still Batman and Beetlejuice before he’s remembered for Night Shift, Clean and Sober, and My Life.

The mirror reflecting actor to character couldn’t be more perfectly aligned. All the while, you look at Keaton and then his character, Riggan Thomson, and wonder the same whopper of a question: Where is his head at?

With that ominous foundation of characterization alone, Birdman is already on a higher plane than others as a midnight-black dark comedy that turns back the performance curtain on many characters with some serious mental issues. When Keaton’s perfection is combined with the film’s bracing, topical, and strong social commentary on Hollywood, Broadway, acting, fame, and celebrity for this different, modern world, Birdman becomes even larger an achievement for Academy Award winner Alejandro Gonzalez Inarritu.

Keaton’s Thomson is world-famous for playing Birdman, a winged comic book superhero in a trilogy of films from the 1990s. Those high times are gone. He’s old, uninterested in social media, and has aged his way out of topical popularity by the current movement of new superheroes (with a finger pointing right at Robert Downey, Jr. and Marvel) that have surpassed and overshadowed his now-ancient and inferior work from a generation ago. He considers himself now to be little more than a Trivial Pursuit answer and not a real actor. 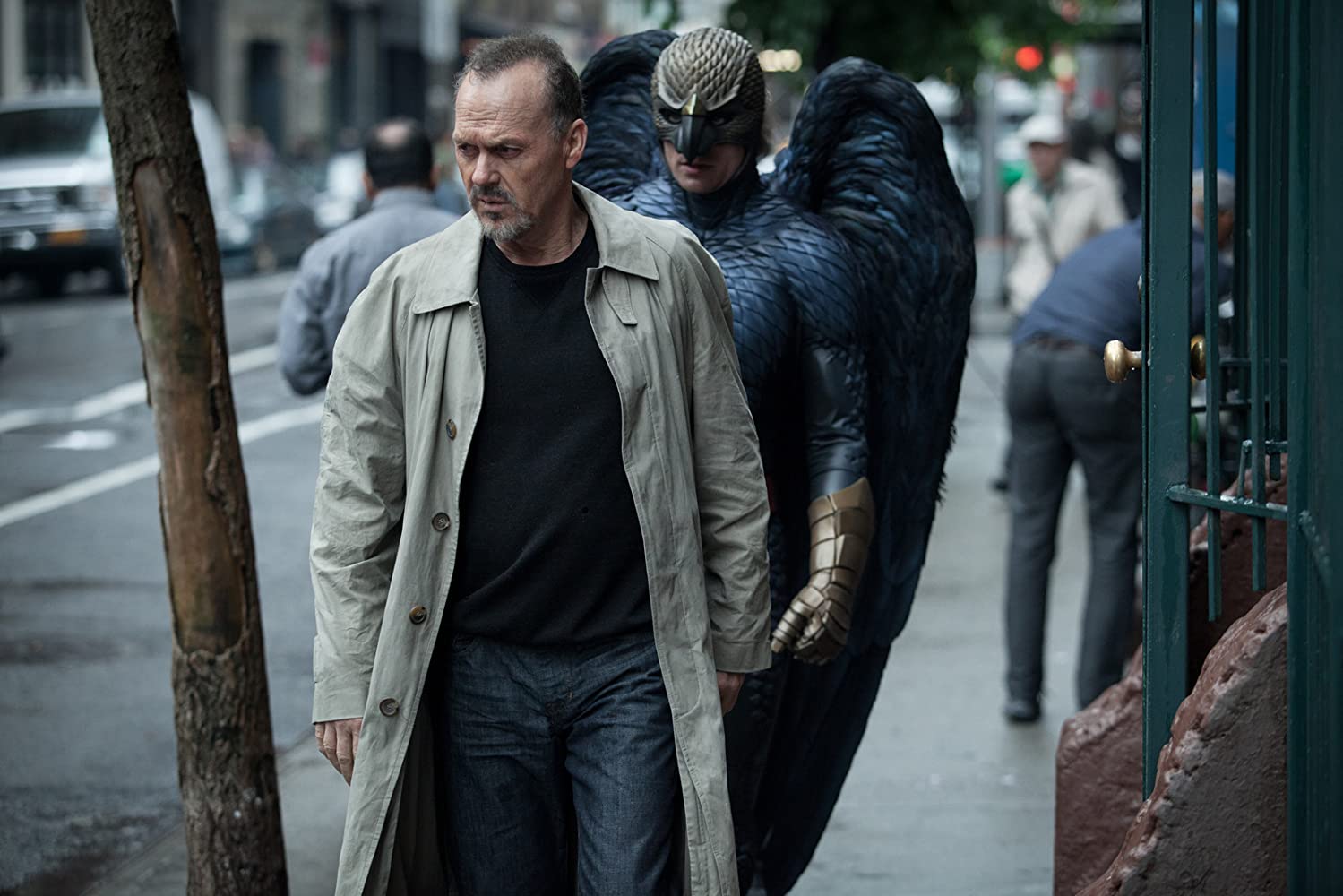 Riggan is reminded constantly of these failures by a dominant voice in his head that happens to be Birdman himself, calling out his manhood and egging him on to continue his sellout ways. Often to a daring and ominous effect, his schizophrenia manifests itself as the former Birdman character and costume itself. In those times that he can suppress the Birdman monologues, Riggan is cordial with his ex-wife Sylvia (Amy Ryan) and is attempting to rebond with his troubled daughter Sam (a very coy Emma Stone). The only best friend has left is his lawyer and agent Jake, played by Zach Galifianakis.

The subtitle of the movie “The Unexpected Virtue of Ignorance” makes for an apt lesson that comes into play regarding Riggan’s point of view on several matters. One could take this a step further and discuss the difference between “love” and “affection.” Love is solid, while affection is fleeting. Ignorance is supposed to be either bliss or hubris to what people think about you. Riggan, however, craves knowing what people think of him and his work. He begs to be loved. He learns his shortcomings and the errors of his ignorance in other areas that keep him from being loved, even by those closest to him. The question becomes: Is it better than he doesn’t know or doesn’t care that he is beloved?

Burned out by the celebrity lifestyle that has demonized his life and feeling uninspired by the ridiculousness of the pigeonholing costume character that made him rich, Riggan has turned down a lucrative Birdman sequel. Instead, he and Jake have sunk all of his money into writing, directing, and starring in Raymond Carver’s play What We Talk About When We Talk About Love on the Broadway stage. This is his hubris pushing to prove himself and his talent. Riggan has gathered a tightknit cast. Naomi Watts is Lesley, a fellow failing movie star who is also aiming to make her Broadway debut. Riggan’s new girlfriend Laura (Andrea Riseborough) is the other female lead. 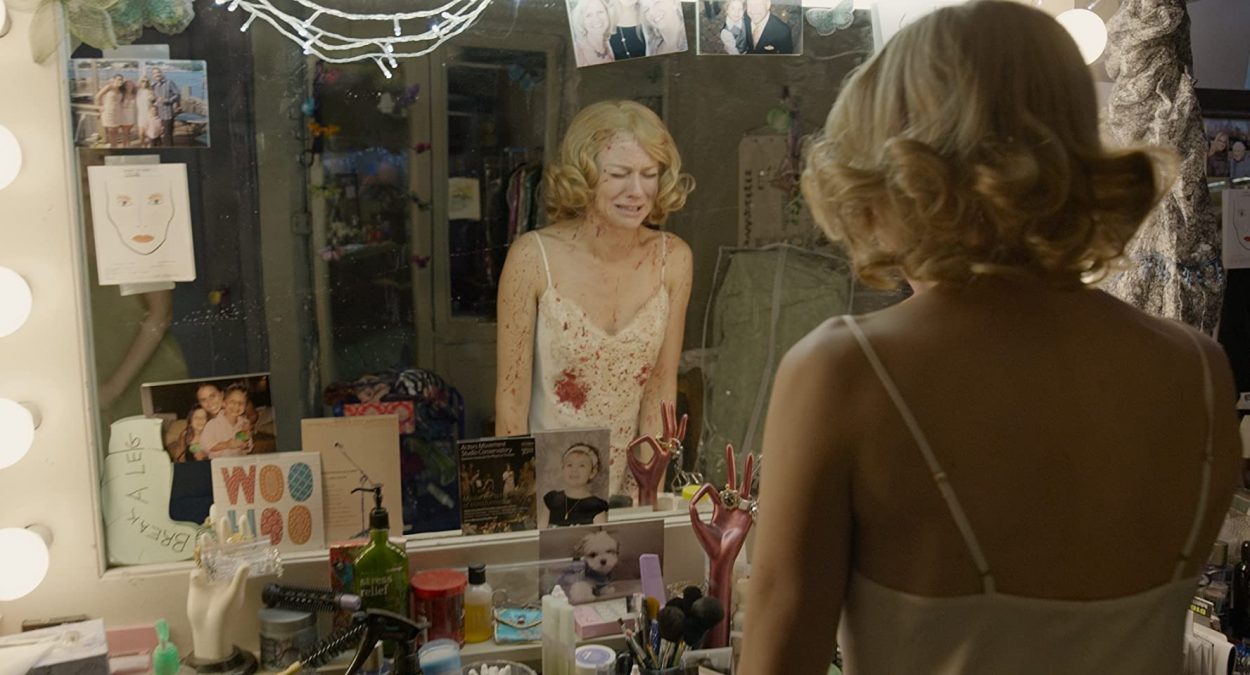 The driving mission of Riggan’s journey in Birdman is regaining artistic integrity. That’s the fuel of both his hope and stress. Because of the ignorance and lack of love shown to him and the lack of real respect and appreciation from his peers, Thomson seeks to regain confidence and creativity by getting this play made. He bets everything on it. He could take the easy route and make superhero sequels but wants this challenge to show others and himself that he’s not just a costume and a catchphrase. Anytime, in any profession, people want to know they are taken seriously and honored for their quality work. Riggan is no different, and this quest consumes him.

For Riggan, this is a whole new arena and challenge that no one thinks he can conquer, especially the snobbish Broadway veterans and critics that feel like some lesser Hollywood bigwig is invading their turf. When the second male lead gets injured in a freak accident during rehearsals the day before preview performances, noted Method actor and Broadway superstar Mike Shiner (a feverishly invested Edward Norton) steps in and infuses the play with instant new energy. His vanity is off the charts.

The Shiner name and clout sell tickets and partially legitimizes the production’s previously woeful pre-opening buzz. However, Mike’s ego muscles in to muddy Riggan’s vision and seeks to steal the show. The pendulum between their passive-aggressive digs and full explosions of bull-versus-bull confrontations typify their true, pathetic conceit. 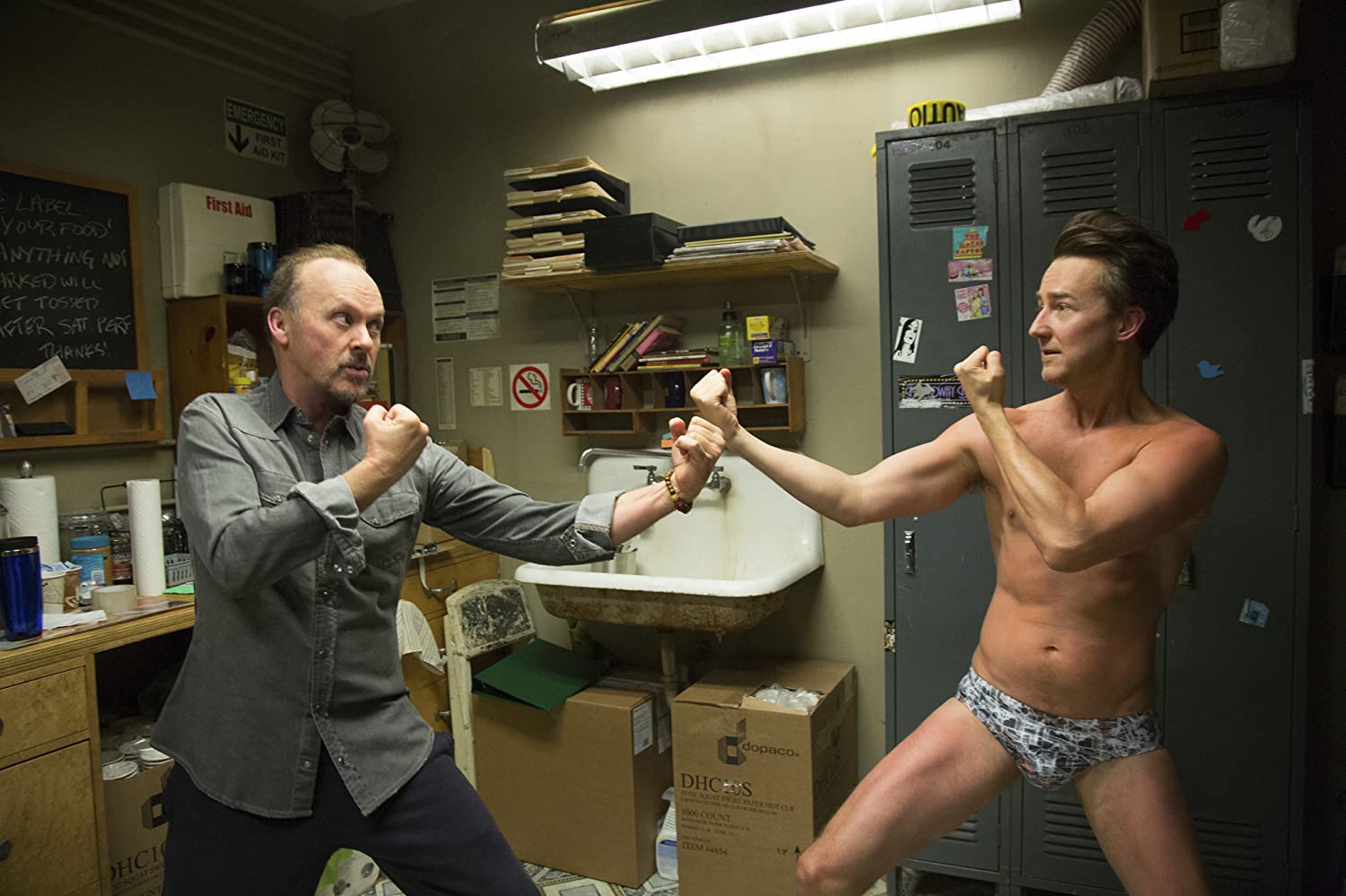 Beyond Mike Shiner, watching all of the minor characters interact with Riggan brings out their personality cracks. For Riseborough’s Laura, you wonder the worth of her clinginess. Galifianakis’ Jake also shows gives off a sense of desperation, unlike a more selfish, Ari Gold-like agent stereotype. Watts’ Lesley is presented as a career parallel to Riggan, but we see those differences for women, especially with different demons. The most striking connection belongs to Emma Stone. You see her energy and her fragility and ponder the “apple doesn’t fall far from the tree” axiom. The beginnings of implosion are there, and you root against them, seeing how her father has turned out. 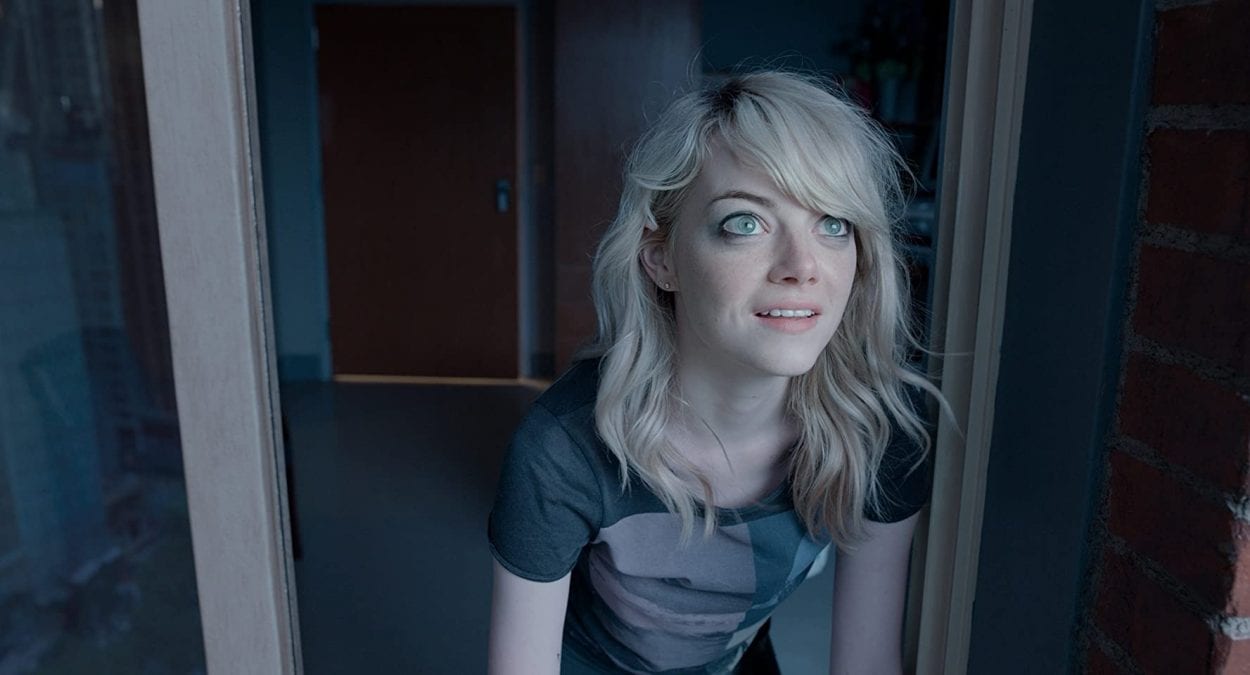 Despite all of these orbiting personalities, you will notice very quickly while watching Birdman how phenomenally smooth it moves in and around these collisions. Academy Award-winning cinematographer Emmanuel Lubezki (Gravity) and Academy Award-winning lead editor Stephen Mirrione (Traffic) use the camera as a puppet and take away its strings while pacing around (and rarely leaving) the tight-quartered bowels of the theater. Utilizing fluid angles and shifting handy-cam movement coupled with cleverly hidden cuts between extremely long takes and scenes, the film has the marvelous illusion of being one single and completely fluid take and not a series of acts or episodes. That effect, combined with a slyly suffocating score from Antonio Sanchez, plays like a lucid mind that can’t be turned off, one fraught with hot-and-cold flashes of emotion and inspiration.

The film’s technical prowess is exceeded by its acting. To fall for the trap of the aforementioned overused description, this could rightly be considered the performance of Michael Keaton’s life. All of that overused hype is actually true. Rich in thorns, hues, flaws, and hidden beauty, Riggan Thomson becomes an unforgettable character and presence. One has to wonder how cathartic playing Riggan was for the veteran star. It’s a showy role that Keaton makes look easy despite its tremendous complications. Riggan may not have gotten the full career revitalization that was sought, but Keaton sure has this time. 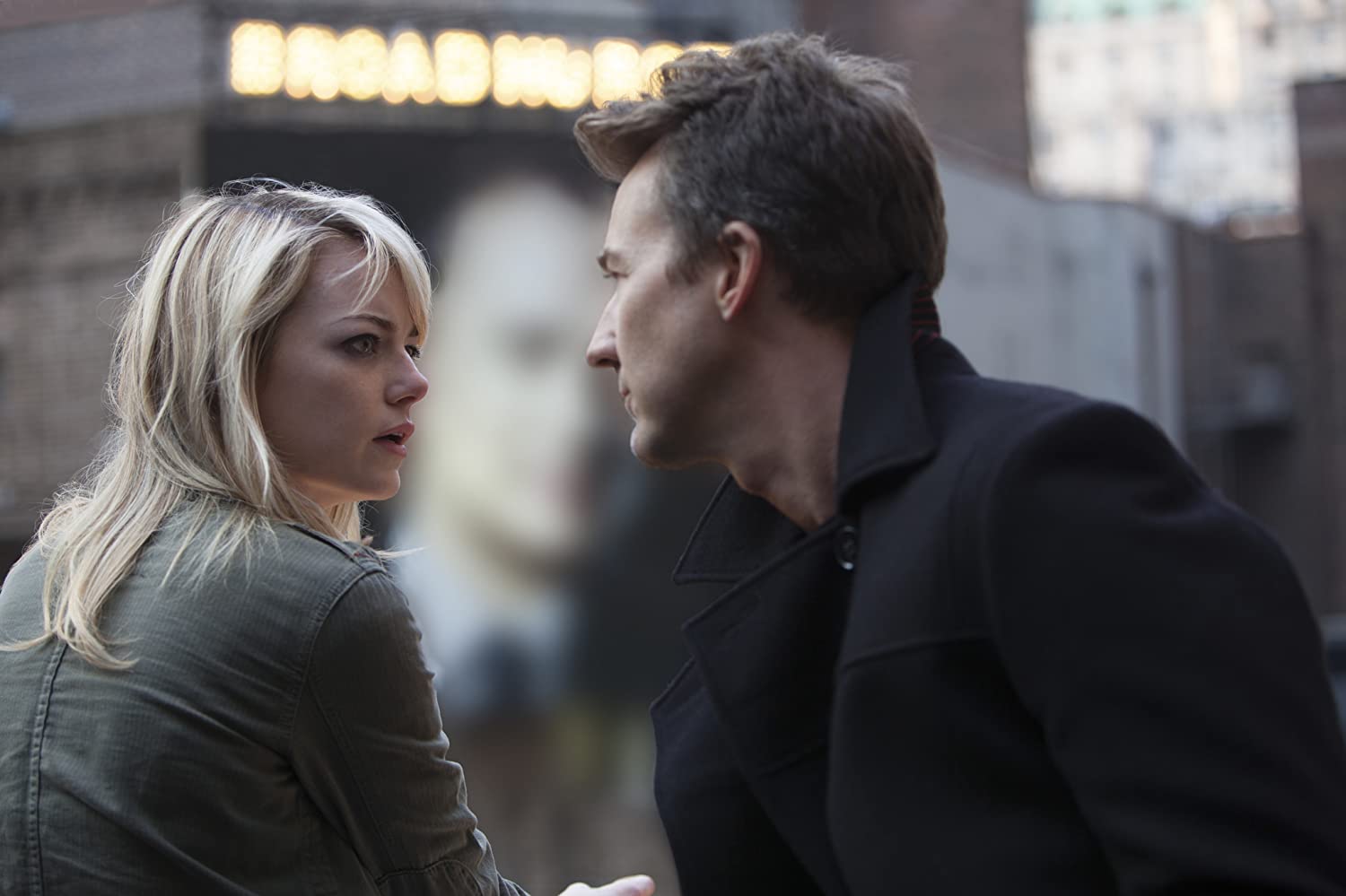 Edward Norton deserves equal praise. In the same way that his Mike Shiner upstages Riggan Thomson, there are moments where Norton outshines Keaton with a devoted energy and brilliance we had not seen from him in a long time. With his past blockbuster history and frequent departures to smaller projects such as Birdman and Wes Anderson films, he too gets forgotten as one of the best actors working today. Norton could be Keaton five or 10 years from now and would still nail textured performances like this one for Inarritu.

Think of the difference between casual fans and cultured snobs. Casual fans are the ones who make less-refined, so-called “junk” popular and successful. More people will genuinely remember the popular stuff compared to who won an Oscar in some smaller movie. The snobs hate that, yet one route pays more bills than the other.

The elite curators of art see something mainstream and ostracize its paltry success that panders to the masses compared to what they consider the challenge and true craft that constitutes prestige. These differing opinions of popular versus successful come up when comparing Riggan’s Hollywood notoriety with his baptism into “real acting” that is theater, while Mike’s vanity has been gilded by the all the prestige love. In a small role of ego from a different perch, stage great Lindsay Duncan gets a juicy scene as a theater critic who tears Riggan to shreds with that level of contempt.

The final star of this production is Inarritu himself. With his Biutiful co-writers Nicolas Giacobone and Armando Bo and an assist from author Alexander Dinelaris, Inarritu has crafted something scathing, honest, relevant, and smart at the same time, a combination that is rarely pulled off this well by even the best industry filmmakers. The well-developed commentary in this film hits like a sledgehammer, yet reveals a shiny penny of a soaring success underneath. It is a massive storytelling undertaking and a savvy technical display to craft such a spellbinding whirlwind.