Ariel has always been my favorite Disney princess. I was fascinated by her adventurous spirit, I loved mermaids, and I loved how she got a happy ending with Prince Eric. I had the Ariel dolls, soundtrack, movies, books, coloring books–you name it, I owned it. I couldn’t get enough of Ariel, watching the movies, and the TV show from the ’90s, over and over again. The first movie, however, has always been my favorite. 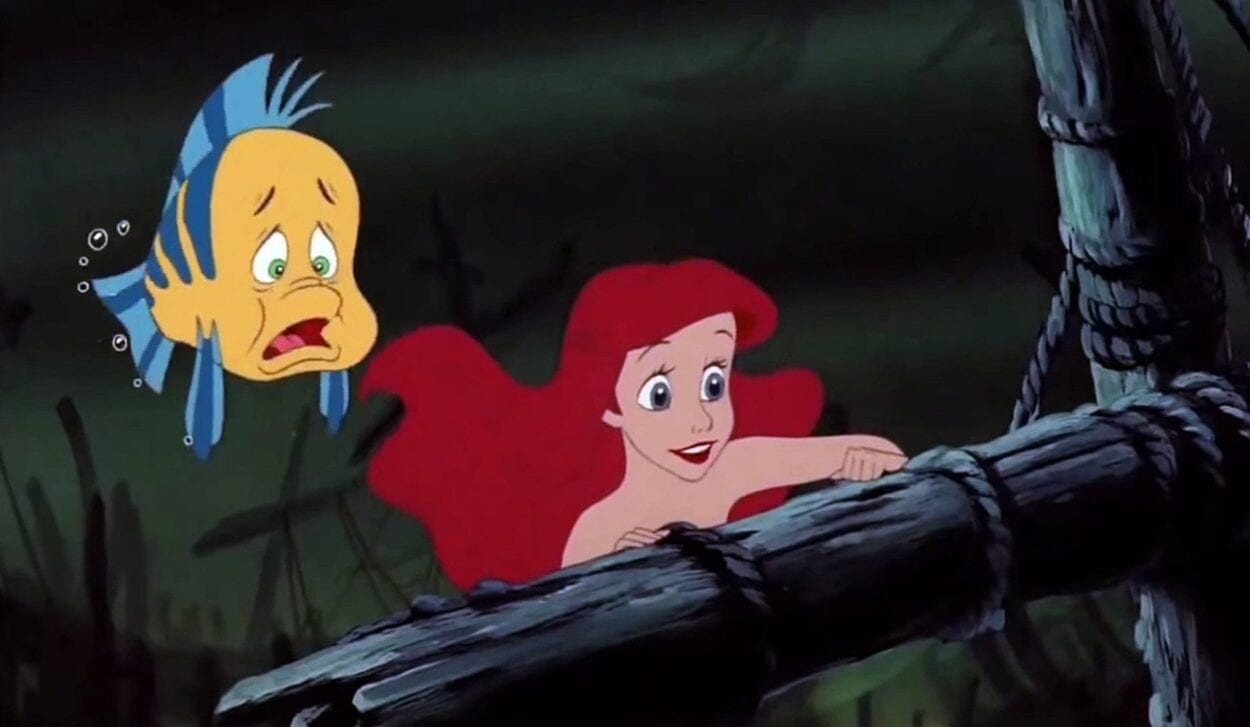 She and Flounder share a great friendship and chemistry by extension. He was the nervous, cautious one, and she was more impulsive and adventurous. They balanced each other out. Scuttle was a wacky and unforgettable character in his own right–a seagull that calls a fork a ‘dinglehopper’ of all things is pretty memorable. Sebastian was just trying to do his job, and the poor crab gets caught up in Ariel’s plight, nearly turned into dinner by the chef in Eric’s palace. Sebastian always made me laugh, and I loved his Jamaican accent–it suited his character perfectly.

I’ve always thought Eric to be one of the most handsome Disney princes. It’s easy to see why Ariel was so attracted to and fascinated by him. I loved their love story; it’s one of the reasons why I watched the movie so much.

Looking back on The Little Mermaid as an adult is an entirely different experience compared to when I was a child. I watched it so many times, but I haven’t seen it in years. I think absence makes the heart grow fonder, as my childhood nostalgia was rekindled, yet I couldn’t help but notice certain wrongs in the story, much as I hate to admit it.

One of the things I loved most about Ariel was her sense of adventure. She wasn’t afraid to look beyond Atlantica to discover new things, places, and ideas. Her biggest wish was to know more about the human world, collecting any items she found from shipwrecks and storing them in her grotto for safekeeping.

I always wanted to know more beyond my childhood home. I wanted to learn about other cultures, wanted to visit other places in the world. I had a puzzle map of the United States as a kid, and I excitedly memorized all the states and their capitals. I also studied the countries of the world. I was particularly fascinated with Boston and Egypt. I know–two totally different places, but they’re still on my destination list.

In any case, I related to Ariel’s desire to explore beyond her own world. I don’t think I’ll get to explore the ocean anytime soon, but my dream is to see the world. Australia, Egypt, Greece, France, England, Ireland…I could go on and on. I’d also love to experience living in another country someday, a least for a little while. But I digress.

I considered Ariel and Eric to be one of the most romantic couples when I was little for a few reasons. 1) they were coming from two different worlds, and yet it worked out between them. 2) it was almost like forbidden love, given Ariel’s father was adamant she should have nothing to do with humans. 3) their chemistry and happiness was palpable, especially during the scene in which they’re in the rowboat with Sebastian composing the song “Kiss the Girl” in the background. Four, their love brought together two very different worlds, uniting them in harmony, proving that only good things could come from their relationship. Plus, if their love was possible, any love could be, at least in my eyes.

I loved all the characters. Flounder, Sebastian, Scuttle. Ariel and Eric. Even Ursula and her two henchmen, because they’d usually make me laugh—at least until Ursula tries to break up Ariel and Eric and goes mad with power. King Triton was harder for me; as a kid, I didn’t understand that destroying Ariel’s grotto and yelling at her was out of love. I liked him far better when he grants Ariel’s wish in the end, as he saw for the first time how much she really loves Eric, and how unhappy she is away from him. Ariel was adventurous, sweet, and kind. She was everything I loved and wanted to be; she was not only Eric’s hero (as she saved his life), but she was my hero as well.

One of the other draws of the film was Atlantica and the ocean itself. I love Worlds that don’t exist in reality. That’s one of the reasons I liked The Jetsons, as characters there could live on other planets. Atlantica was beautiful, shining and bright, existing in the sea. A part of me always wished it were real so somehow I could live there, and be part of their world. I was fascinated by the sea creatures, the decorations, the golden city and the merpeople.

Last but certainly not least, I loved to sing and dance to the songs as a kid. “Under the Sea” is my all-time favorite. I still have the soundtrack, and I love listening to it every so often just for fun. Songs from my favorite childhood movies carry a special place in my heart.

Each of these elements contributed to why The Little Mermaid was, and is, one of my favorite childhood movies. It had an impact on me as a child, giving me someone to relate to through Ariel, and allowing me to experience her adventures with her.

As an adult, I still love the movie. I ended up having an entire Disney marathon while re-watching The Little Mermaid, revisiting Beauty and the Beast, Robin Hood, Aladdin, and The Rescuers along with it. I’ve always been a Disney fan, and after having my mini-marathon, all I felt was joy and love afterwards. There’s nothing like a good Disney movie or two (or six) to lift your spirits and get you believing in all that is good.

However, while watching Ariel and Eric’s story play out, I noticed things about it that I hadn’t as a child. It’s incredible how you revisit something years later and see new things, despite having viewed it hundreds of times back in the day.

Ariel is sixteen. She can be rebellious on more than one occasion, as many teenagers are. She doesn’t listen to her father, refusing to see his side of the story. She is relatively naive when it comes to life itself, especially where it concerns humans. Not to mention that, after saving Eric’s life, and having never spoken with him or gotten to know him, she later tells her father she loves Eric. How could she know it was love without technically meeting him, as he was unconscious most of the time during their first meeting? It’s clear she still has some growing up to do, and she grows up rather quickly.

Despite knowing the danger of making a deal with Ursula, Ariel impulsively does so anyway. She doesn’t consider how it will affect her family, especially since she places Sebastian, Flounder and Scuttle in tough situations, as they must help her win over Eric before the deadline or else face serious consequences. Not to mention that she didn’t even leave a note. She just disappears, leaving her father and sisters to worry, with King Triton exhausting every resource he has to find her. It’s selfish on her part and probably done out of hurt and anger, considering Triton had destroyed her grotto and its treasures, specifically Eric’s statue which had gone down with his ship, just before her abrupt departure.

Triton was too abrasive in his approach with Ariel and had trouble listening to her side of the story as well, displaying some form of family dysfunction. However, what really bugs me is the fact that he let his sixteen-year-old daughter marry a prince. For one, it’s almost as though he’s rewarding her rebellious behavior, and two, she’s definitely underage. Granted he wanted Ariel to be happy, but she’s not quite an adult, and shouldn’t she and Eric have dated a little more, especially given Eric had only just found out she was a mermaid before they married?

Speaking of which, how did Eric adjust so quickly to having a bride from another world entirely? In real life, it would take some time to adapt and to see if it would even work between them given their entirely different backgrounds.

At the end of the day, The Little Mermaid is still one of my favorite childhood movies. Despite certain things in the plot that would be a problem in reality, reality simply isn’t the point. Movies, particularly Disney ones, are meant to tug on the heartstrings before they present the happiest of endings. Movies are not typically reality, and that’s why audiences love them so much. It’s not about black and white or what’s reality versus fantasy; it’s about ditching the real world, indulging in escapism and simply enjoying the characters and their storylines.

The Little Mermaid is a beloved time capsule from my childhood that I genuinely and thoroughly enjoyed unearthing and watching again. It brought back wonderful memories and will always be special to me for many reasons. I will always be a fan of Eric’s and Ariel’s love story, and there is still a special place in my heart for the sea as well. A part of me will always be a part of Ariel and her world, and a part of me has carried Ariel and her world with me, as I discover more and more of the globe. I may struggle from time to time, but I won’t let it overwhelm me entirely. I am always learning and enjoying it each step of the way, in the same adventurous spirit I know Ariel would concur with. She was one of my childhood heroes, and always will be.