Tina (Eva Melander) watches over an incoming crowd disembarking a newly arrived passenger ferry. Her nose twitches and she scents the air. Her upper lip pulls back to reveal quite a remarkable set of gnarled discoloured teeth. Pulling a young man aside from the crowd, she somehow knows his shoulder bag contains undeclared alcohol. She has, it would seem, literally sniffed out the guilt of the carrier and his stowed away contraband. Confiscating the alcohol, Tina tells him that he can pick up the bag on his way out. Walking away, he mutters “Ugly bitch, I hate that kind”.

And so begins Border (Gräns) a modern-day fairytale about belonging and specifically identity. This is the film’s most prevailing and punching theme. This is director Ali Abbasi’s third film and it is an expertly delivered, genre-defying take on the magical realism stories of Norse mythology. He co-wrote the screenplay with Isabella Eklöf and John Ajvide Lindqvist and it is based on the short story of the same name by Lindqvist from his anthology Let the Old Dreams Die. [1] Lindqvist was also the writer of Tomas Alfredson’s 2008 Swedish romantic horror, Let The Right One In. It would seem then, that we are in for something special.

The story centre’s on Tina, a loner and an outcast. With Neanderthal-like features (let’s give a nod to the astounding prosthetics and makeup design by Göran Lundström and Pamela Goldammer here), protruding forehead, extra body hair and snarled top lip, she is set apart from the crowd with something almost otherworldly about her. She lives in a small shack-like cottage in a forest just outside the port town of Kapellskär in Sweden and shares her life with boyfriend Roland (Jörgen Thorsson). Roland is a freeloader, a man who spends his days in the dimly lit cabin watching horse cart racing on TV, drinking, and preening his multitude of show dog Rottweilers.

Tina is evidently aware of her difference and has been living a quiet (albeit frustrated) life. Upon returning home every evening she removes her shoes and socks and walks barefoot into the forest beyond. We feel every footstep she sinks into the moss-covered forest floor and she has an uncanny connection to the animals she encounters there. All in all, this is something that Tina needs to do. Her affinity with the land is presented not as an act of liberation, but as an act of naturalisation. This is where she belongs. 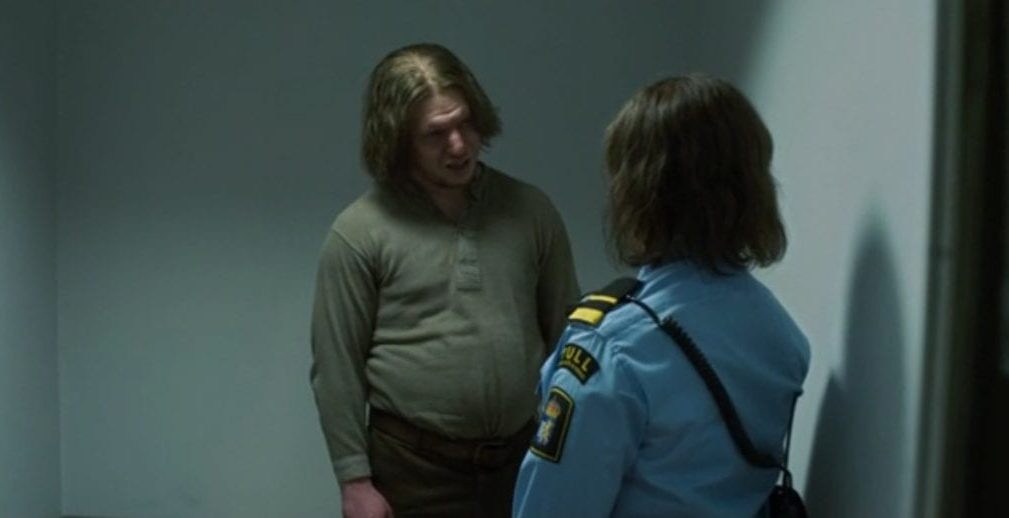 Enter Vore (Eero Milonoff). Astute and assured, he is a sudden and enigmatic presence in Tina’s world. They first meet when, at the Swedish Customs Control, she suspects him of carrying suspicious items through from Finland; this includes a box resembling a homemade explosive device, but on closer inspection we learn, contains insect larvae. However, there is much, much more to this new stranger. Vores’ physical features, his head, teeth and hair bear a remarkable resemblance to Tina’s own. Her telepathic sense runs wild. It is a strange mixture of both intense curiosity and more than a hint of sexual desire. After a humiliating incident involving a strip search carried out on Vore, Tina feels there is more to this stranger than meets the eye. She decides to invite him to stay at an outhouse on her property.

Abbasi seems to have achieved quite an astonishing feat with this film. From the start, he embeds the viewer into the narrative in such a matter of fact way that you barely question the huge, central revelation when it comes. Borders’ world is so expertly set up from the outset, the story so smoothly drip-fed, that any fantastical elements to the film, feel as real to our concept of normality as any great drama worth its weight. From frustration, to revelation, liberation, and finally betrayal, Border is as refreshing a take on an age-old tale as you are likely to find anywhere in current film or literature.

Tina has spent her whole life having suspicion cast on her, not only for the way she looks but also for who she is. It would be unfair to go so far as to divulge her full character arc here. However, after her career takes a darker turn: her ability to detect the guilt and shame of another human being leads Tina into an underworld investigation of a child pornography ring—her relationship with Vore will take her on a more fantastical journey. One that will change the way she sees the world forever.

Here, Vore reveals to Tina, information about her true self. From this point forward Tina is reintroduced back into the world. She takes hold of her newfound freedom with a vigour and catharsis reminiscent of a caged animal set free. One that has never known its true home but always knew deep down its fundamental nature and where it belonged. This leads into an incredibly moving scene where the pair run naked through the forest. Unleashed and untamed, they swim the lake in a rainstorm, Tina screaming aloud and ecstatic to the whole of the world.

Afterwards, Tina pays a visit to her Father (Sten Ljunggren) who is slowly succumbing to progressive dementia in a nursing home. Confronting him about her past, Vore’s revelations and her own awakening, he admits that he has hidden her true identity from her all these years. 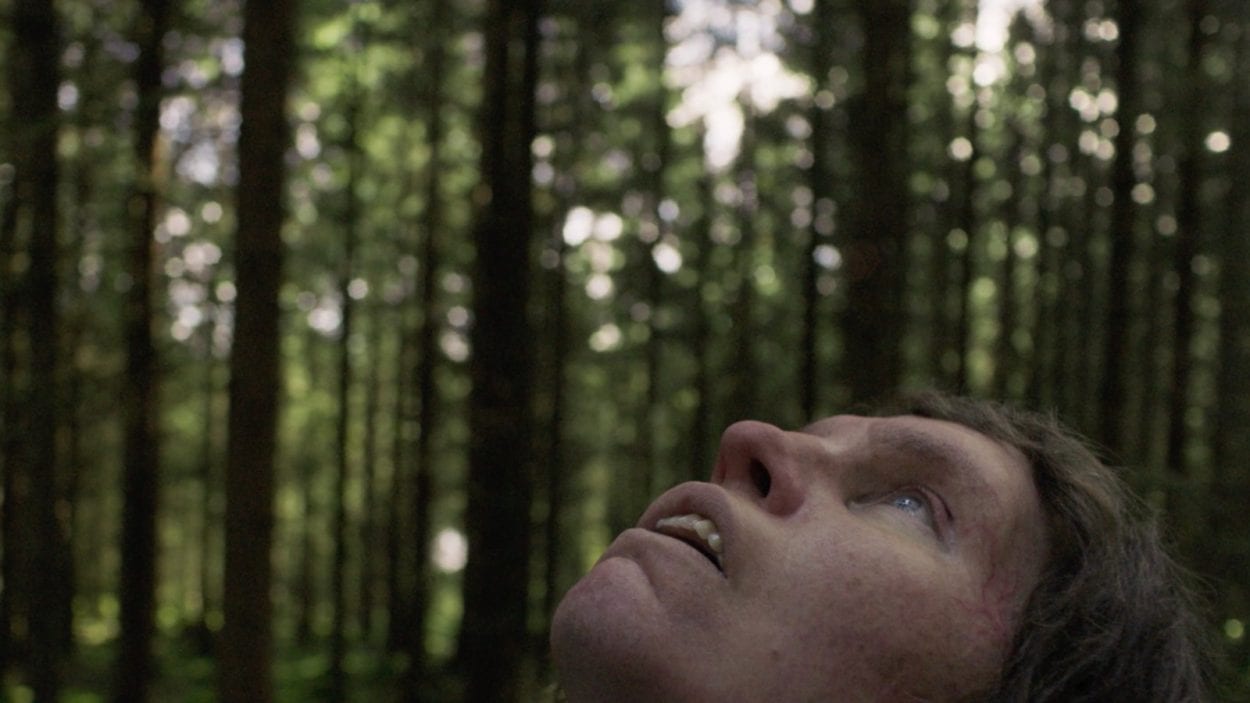 A Question Of Intention

Timely upon its release in October of 2018, the film acts as a kind of modern-day parable for western society and its treatment of minorities. Often isolated by virtue of perceived difference, it could be read as a statement on western society’s treatment of immigrants (Abbasi himself emigrating from Iran to Denmark in 2002), or its struggle to accept anyone who does not adhere to conventional sexual gender norms. Another and perhaps more broad reading of the film, is in what is understood to be civilised and what is not in a conformative society.

Through the realm of magical realism, Border highlights the immense struggle it can be for those whom society have deemed don’t belong. Trying to make sense of a community that seems to look the other way and in some instances deny their existence altogether. Difference, cruelly punished just for daring to fit in. Tina is quiet and thoughtful. She has spent her whole life living on the margins of a society that long ago cast her out. In one scene Vore is pushing Tina to question her true nature. Tina says she always believed she was “An ugly, strange human, with a chromosome flaw”. Vore counters her back on this, “A chromosome flaw? There’s no flaw in you”.

Border is a film about identity, yes, but it is also one about dilemma. The dilemma of having to choose between two very different worlds. Upon discovering her true nature, Tina must first and foremost, make a decision on how to live her life. But whatever she decides, her actions will come at a cost, having to leave one world for another. It will ultimately lead her to a choice between good and evil, with neither side offering any firm concessions and reassurance on this issue. Besides, the consequences of whatever choice she makes, will never truly allow her to bridge both worlds again.

Richie Jenkins is originally from Wales. He moved from there to London and now lives in the south of France. He is a director and editor of all things film. He loves podcasts and reading and is obsessed with cinema. He also thoroughly enjoys riding his bike, especially on sunny days down to the coast, with the wind gently coursing through his hair. It is fair to say he is enjoying life, but sometimes struggles to comprehend it.