Every month, we’ll be looking back at the music from 1995 to explore why these albums are still relevant to us 25 years later. This month brings us Nine Inch Nails’ Further Down The Spiral, Soul Asylum’s Let Your Dim Light Shine, Sleater-Kinney’s Sleater-Kinney, The Batman Forever soundtrack, Paul Weller’s Stanley Road, and Primus’ Tales From The Punchbowl. 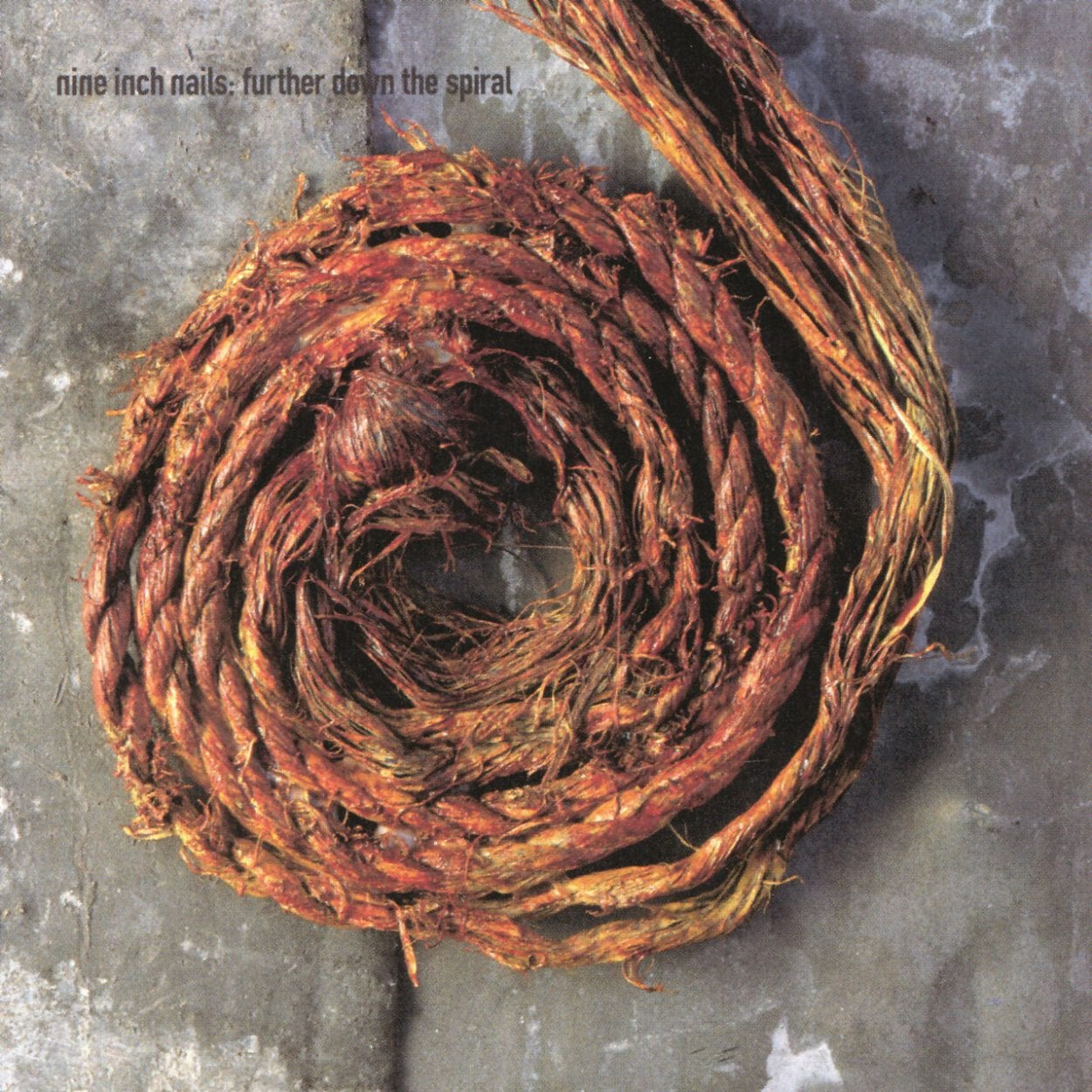 25 years ago, on the 1st June 1995, Further Down the Spiral was released. Essential industrialised and ambient remixes of Nine Inch Nails’ The Downward the Spiral and infamously recorded in the Sharon Tate house (where she was murdered by Manson Family members), it holds a particular place in my psyche.

Trent Reznor is Nine Inch Nails. Until 2016, he was the only official band member. He writes the music, plays, records, produces the music. He was, and is, a fascination to me.

The tracks are industrialised noise bombs, which at the same time are so subtly pared back.

I first encountered NIN in my informative glory days of youthful trespasses at a local metal club. In the ’90s, ID wasn’t the impediment to teenage rebellion it was today. My friends and I traversed town, deflected parental concerns (or plain lied) and made our swaying ways to nights of sticky floors, dancing and avoiding toilets that made the one in Trainspotting seem hygienic. There were stomping boots and swinging hips, goth dancing like I had never encountered. Noise. Friendships made and lost. UV glow in the dark skin. Neon alcopops all creating light in the gloomy club darkness.

Hurriedly purchased on CD in our local indie record store the next afternoon, a mere three years after its release, 15-year-old me mistook Further Down the Spiral for its previous year’s namesake. I don’t blame her. It is confusing. I’m not complaining though. And anyway, it was £4.00 cheaper. £4.00 went a long way back in 1998.

In many ways this was the perfect teenage angst-ridden album, made to be played louder than loud, realising anger, frustration, and melancholy. Best of all, it came complete with unforgiving lyrics, which terrified my parents.

The two Apex Twin tracks, “At the Heart of it All” and “The Beauty of Being Numb,” formed part of the soundtrack to my GCSEs, listened to through grimy headphones huddled amongst metal, grunge and late ’90s indie. “Piggy” became the song to counter bullies, the ambient serenity of “Reptilian” soothed and “Hurt”, well, every time I hear that song, the claustrophobia of it feels as if someone is pressing on my soul. I may not have appreciated the significance of collaborations with J.G. Thirlwell and Rick Rubin et al. at the time, but I appreciated this album for its emotionality and its distinct lack of. A self-obsession of pain.

“Self Destruction: Final” is my favourite track on this album. It pounds. Thirlwell’s remix is a call to arms. Frantic in its noise layering, it samples “Time” by David Bowie, a nod to Reznor and Bowie’s joint efforts which produced the 1995 tour and a lifelong obsession.

Further Down The Spiral

Further Down The Spiral, an album by Nine Inch Nails on Spotify

So, enough about me, what of the album itself? There is something quite egotistical about producing an album of remixes to your own album one year after its initial release isn’t there? Maybe there is.

Nevertheless, the beauty of this album is that it illustrates the capacity for Trent Reznor to enable artistically talented people to build on his music; a relinquishment of control achieved through knowing you’ve wholly captured the creative process. The inception of the now-defunct remix.nin.com supports this (you can find the archive here.) The album’s strength is in its mimicry and creative endeavour.

I fell in and out of love to this music. The CD came with me in travels my first car, on adventures and escapes. It gave me a misshapen groove, music I could “love and need and … relate to”: a place from which to begin. This album still “take[s] you where you want to go.”

Piggy (Nothing Can Stop Me Now)

First off, I think this album is better than Grave Dancer’s Union. Yes, I know it contained “Runaway Train” and “Black Gold,” but those hits are no match for “Misery” and “Hopes Up” (though I’ll consider “Somebody to Shove” a contender). I’m also not ashamed to admit that, back then, I had no idea these guys had five other albums under their belt which were basically punk rock. Don’t worry, I’m a little hipper nowadays.

I believe with a band called Soul Asylum, that soul should play an important role in their sound. Let Your Dim Light Shine oozed so much soulfulness that it instantly made a lifelong connection with me during the summer of ’95. The delicate balance of soft blues and chaotic angst was exactly what I needed at the time. When I first heard “Misery” on my local alternative station, I was a goner. I loved how quickly the song progressed from the subdued intro to the therapeutic, upbeat chorus of, “Put me out of my misery!” David Pirner took the tired cliché of “misery loves company,” and made it interesting. When I think of ‘90s anthems, this song always has to be included. Imagine my delight when it appeared in Clerks II 11 years later.

“Hopes Up” should have received more attention. It snuck its way onto radio a few times then disappeared. I’ve never listened to the beginning of it without air drumming like a maniac. The way the lead guitars sync up with the vocals in the chorus is just gnarly. The heaviness of Karl Mueller’s bass notes really stamped it with an extra “oomph.” This is one for just letting it all out. It’s a blast to cruise down the highway with the windows down and yell “I feel like feelin’ better than I ever felt before!”

My favorite thing about this disc has always been the variety and pacing. It’s amazing how often the band switches between distorted guitar hooks and mellow, reflective crooning, without it feeling forced. “Caged Rat” seamlessly flips from lounge music to extreme grunge, without warning. It even has some bloops and bleeps thrown in for good measure. I like to call it “fusion incorporated,” or “angry jazz.” The lyrics are short and repetitive, but they work for the song. It also predates Billy Corgan screaming about “a rat in a cage” by about four months.

As a creative writer, I’ve always appreciated the storytelling in “String of Pearls.” I don’t just hear the song; I see it play out like a movie. It’s an interesting look at how similar people are, and how oddly connected we become at times. Bonus points for the humorous line that many teenage boys (and adults) can relate to – “Death was one thing, but women made him nervous.” Pirner also succeeded surprisingly well at narrating tales about female tribulations on “Just Like Anyone” and “Tell Me When” (though the latter still makes me cringe when I hear the chorus).

Thematically, it’s a loose concept album centered around depression. Whenever the record concludes, I feel like I’ve spent a week with someone who has conquered (or at least managed) their demons with a smile. “Shut Down” deals with the struggles of feeling invisible and dysfunctional. There’s great wordplay in the line, “Tried to get ahead but only got decapitated.” You can feel the frustration bleeding through the speakers on this fist-pumping tune. It wouldn’t surprise me if something was smashed or lit on fire after its recording.

On the immediate opposite side of that aggression is a beautiful piece I could imagine Tom Petty singing, “To My Own Devices.” I didn’t think much about it when I was younger, but now I sense a battle with alcoholism. The first line, “Shouldn’t a got so loaded, damn near exploded,” combined with the chorus, “Please don’t leave me to my own devices,” sounds like a cry for help. It’s someone admitting they can’t be trusted on their own. A similar confession shows up again on the heavier “Crawl,” with lyrics like, “See you later maybe, one more beer,” and the powerful, “I could use someone to drag me out of here / I am that someone, it’s all become quite clear.”

“I Did my Best,” closes the album with Pirner peacefully singing, “And I did the best that I could do, with all the mess that I’ve been through.” After 25 years, this record still beams with a powerful ray of hope amidst the struggle that is life. I say do like the title suggests, and let that dim light shine.