For those who may not be familiar with the work of Japanese group Crossfaith, the best way to explain their style is definitely “the aggressively violent lovechild of The Prodigy and Slipknot.” The Osaka five-piece have a presence and energy that isn’t seen anywhere else, with explosive live performances and a distinct musical style—combining electronica with metal and hardcore elements to near perfection.

With this differentiation in style comes a high expectation from every single release that the group makes. New EP Species meets them with relative ease. If you’re new to the brilliance that is Crossfaith, this release is the perfect thing to get you acquainted. It encapsulates everything that has distinguished the group from the majority of other bands while offering a completely different album structure to the ones seen in other releases.

Unlike other Crossfaith releases, there isn’t an overarching message across the whole of the record. Instead, each song is established as its own thing, which is fine when done right. In this case, it’s not the best.

But even with this surprising change in structure, we see nothing out of the ordinary in the music itself. Five explosive songs with all the things we’ve come to expect from the group. We burst into the record with opener “Digital Parasite,” where all of the group’s calling cards are on display. Smooth changes of pace, synth work comparable to the aforementioned Prodigy, frantic drumming from Tatsuya Amano and diverse vocal styles throughout from Kenta Koie. A hip-hop-inspired segment in the song reaffirms to listeners that Crossfaith is not afraid to switch things up and are comfortable in trying something new.

We see the high energy level continue in “Endorphin.” Again, the trademark fusion of electronica and heavier, metal-ly style hooks is heard. We also have an addictive, bouncy chorus which juxtaposes the heavier stuff around it. Overall, a great way to give listeners some breathing space while keeping things within the norm. 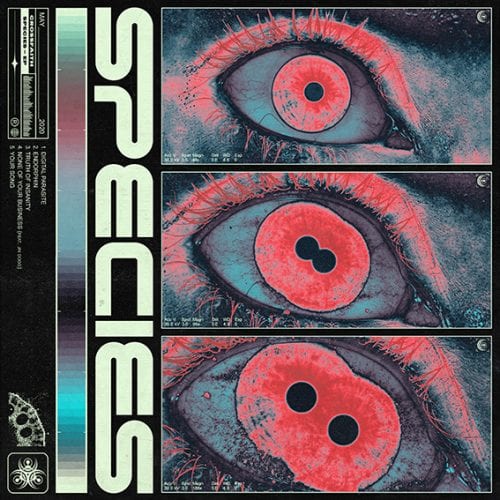 “Truth of Insanity” and “None of Your Business”

Next is “Truth of Insanity.” A weak effort, frankly speaking. In some areas, the guitar work borders on generic; the chorus—while catchy—feels shoehorned into the song, not fitting the flow of the track in any way, shape or form. It does, however, manage to redeem itself in some areas, due in no small part to Tatsuya Amano being an insane drummer and really helping the song pick up the pace.

We get another strong effort in “None of Your Business,” which features Osaka-based rapper, Jin Dogg. While I’m not a fan of rap in any way, the addition of Jin (and hip-hop elements in general) to this song once again shows that Crossfaith is comfortable in evolving its style. It provides a very intriguing soundscape, one that is further bolstered by ominous synth work and powerful, shrill screaming from Ken.

A strong penultimate track sets up an absolutely stellar finale, in the form of “Your Song.” This is the greatest example of Crossfaith breaking new ground to date. The track has a particularly dramatic, emotive quality about it, something that really elevates the composition as a whole to another level. While it is in no way a softer, piano ballad of a song, the use of keyboard elements combines effortlessly with impassioned lyrics and excellent guitar work to create something truly special. A final chorus allows the song to be firmly embedded in the brain of the listener.

Despite some shortcomings in areas of the album, Species is a near-perfect burst of pure energy and experimentation while not branching too far away from what we’ve come to expect in the past. We see new elements that set some very promising foundations for an entirely new sound and a refreshing (albeit shocking) change in album structure and narrative.

Crossfaith has absolutely earned my investment for them as future Download Festival headliners.

Species is available now via UNFD.