Matching what decades of movies and TV shows have characterized about personal assistants, cinematic commandments stipulate that Dakota Johnson’s character Maggie in The High Note must work for demanding and vain people and carry an clear-as-day inner ambition to seek her own fame. Those same narrative tendencies urge us to pooh-pooh the former and root for the latter. We are supposed to love that brand of “started from the bottom” underdog moxie. 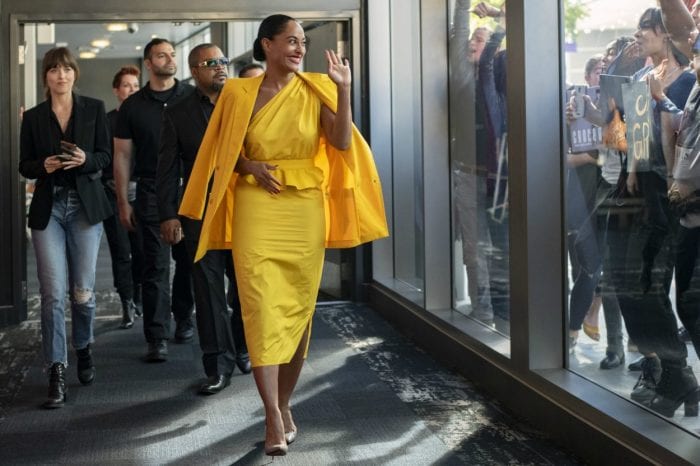 However, each time Maggie’s employers, the fictional world-renowned recording artist Grace Davis played by Blackish’s Tracee Ellis Ross and her manager Jack Robertson played by Ice Cube, summarily dismiss her to stay in her lane or fetch some inconsequential thing, The High Note gets better because the real talent is allowed to emerge. To love underdog moxie, or any moxie for that matter, you have to have it. The flimsy Dakota Johnson doesn’t. She, and the movie opening on VOD May 29th, would be better served by her getting out of the way just like her shunned and devalued Maggie.

You’ve seen this type working a gateway to a dream job. Maggie Sherwood is a fantasizer surrounded by those with more in superior clout. Daughter of a radio DJ (an extended cameo from Bill Pullman) she, with her beater classic car, fringe jacket, and old soul encyclopedic knowledge of the music industry, works as the tireless personal assistant to an 11-time Grammy-winning legend. Grace Davis is hitting middle age making easy money off of a live “greatest hits” album and its connected national tour. She is entertaining the prospect of a multi-year residency in Las Vegas, a bankable move brokered and pushed by the cranky Jack. 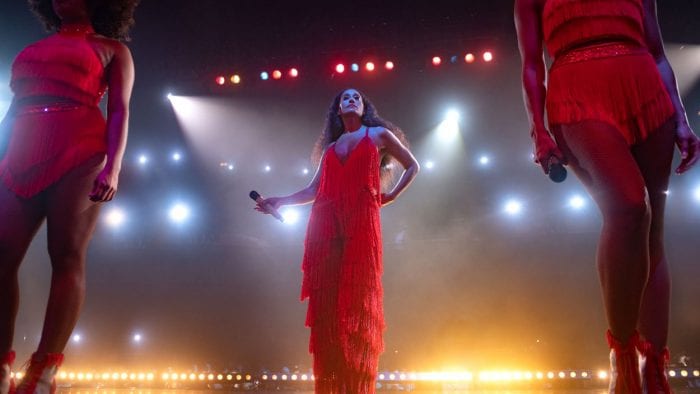 The line “when there are no surprises, then who are you doing it for” is an ever-present realization Grace seeks to avoid.  Naturally, she is at a creative crossroads and has the itch to do something new. Behind the scenes and after work hours, the ambitious Maggie has been taking a deep remixing dive into Grace’s catalogue of hits. She feels like she has producing ideas better than the usual and forgettable scheduling and shopping advice of her typical job duties. Maggie urges Grace towards a new album with new material, a business surprise Jack and the circling army of marketing suits are against.

Pause for a second. Raise your hand if you know what a music producer does? According to this movie, you push a few buttons, slide a few levelers, tinker on a computer occasionally, nod to a beat when it suits you, and give some notes on an intercom while songs are being recorded. Instead of going off of The High Note, go look at the full job description instead and then marvel how Maggie could possibly hurdle all of the ladder rungs before her and do all of that. No one is buying the “seen enough to try” line, Miss Sherwood.

Press play. If only “urge” could be more “clamor.” Tracee Ellis Ross and Dakota Johnson are positioned in moments away from the mania and managers to have sincere conversations on music, legacies, arrogances, and aspirations meant to shift and forge each other’s confidences. Ross holds up her end. In that handful of scenes, she exudes the gravity of age and grace befitting her role. And when the lights are on and the crowd is loud, she’s even better. Johnson and her flatness cannot match that whatsoever. You follow her journey as the lead in The High Note and carry no rooting interest.

Where this movie finds its spark is where Maggie finds a coinkydink of a personal and professional one of her own. After a pick-up artist setup, the Sam Cooke-shining pipes of the unsigned David Cliff, played by white-hot emerging actor Kelvin Harrison Jr. of Waves and Luce, blow her synthesizers and her socks off. Maggie passes off her inexperienced chops and convinces the flirtatious David to let her improve and produce his original songs into a portfolio worthy of a new artist.

The most passionate this film gets is when the microphones are hot and the lyrics provided by music supervisor Linda Cohen are sung. The warmest the cold bucket of water that is Maggie gets is when she speaks of the internal heart rhythms that create the “spine of a song” more than hooks or beats. Life has to come out in art and that’s the headiest truth this movie can muster. 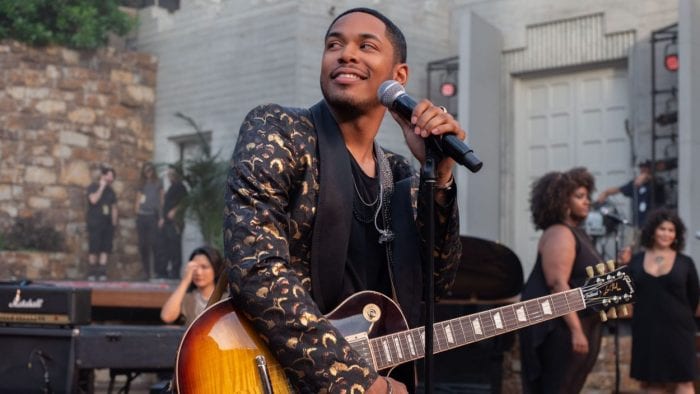 Go from pause to stop this time. Kelvin Harrison Jr. steals this entire movie. If all you have seen of Kelvin (and you need to) is his outstanding dramatic acting over the last few years, come marvel at his never-before-seen musical ability, honed by a youth spent with the Marsalis jazz family. Goodness gracious, this young man is special! Here he is at a mere 25, slaying choice parts, playing instruments, belting out harmonies, flooring us all, and rivaling both his idols and contemporaries for sheer talent. If Kelvin keeps this up, we’re going to be saying “Will who?” “Jamie who?” and “Denzel who?” someday. He’s that damn good already.

Kelvin Harrison Jr. joins Tracee Ellis Ross as the true flair and excitement you want to watch in The High Note, directed by Late Night’s Nisha Ganatra from a reclaimed 2018 Black List screenplay by debuting writer Flora Greeson. Every time they step forward, the movie shines. Instead, their wattage is filtered through milquetoast tropes of stepping stone laments, sell-out pushback, forced romances, career lies, and small-world bow-tying conveniences you’ve seen too many times and in better places. With that kind of talent, diverse examples at that, present in front of Maggie (yet behind Dakota in billing), there was a stage primed for performing and exploring true individual and industry challenges, not those little bumps delivered through the lead’s uninspiring presence. Once again, Maggie (and Dakota), get out of the way. Give us the real potential power.