It has become quite the en vogue thing to do within the circles of cinephilia to vehemently express ones hate of The Godfather Part III. Despite the endless amount of blog posts a quick Google search will provide claiming that the third installment in Francis Ford Coppola’s mafia epic is an absolute aberration to cinema, it deserves to be reexamined as perhaps the most human of the series. The urge to assign the monikers of best and worst of a trilogy are beyond me. Yes, the first two Godfather films are sensational pieces of cinema and both subsist as standalone features, but The Godfather Part III is a brilliant closure to the rise and maturation of Michael Corleone.

Part III takes place in a different world than the first two, and this fact alone seems to be a stumbling block for audiences at large. We are all aware by now that ageism in cinema is a problem that not enough people take seriously, and The Godfather Part III falls victim to this reality. Few people want to see an elderly mafioso, even one as smoothly calculating as Michael Corleone, nor does it seem they want to see the rest of his aged family and the hardships of growing older. Therefore, it should be reassessed that the third Godfather is not a bad film, it is just simply not what fans of the series were expecting. 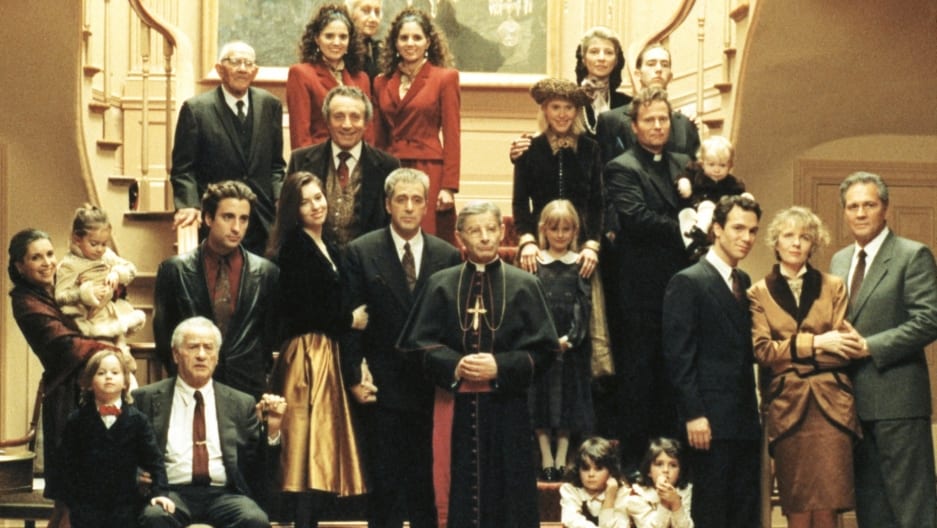 On Christmas day in1990, Francis Ford Coppola put a bow on The Godfather Part III for us all. Opening with a party just as its two predecessors, The Godfather Part III brings us up to speed with Michael Corleone (Al Pacino), patriarch of the Corleone family, as he is receiving The Order of Saint Sabastian (Sylvester) as he struggles with himself and his associates in attempting to legitimize his family’s business. We remember, he lost the love of his life due to his going back on the promise he made to Kay (Diane Keaton) to keep his family’s business on the up-and-up. After she made it clear that she would have no involvement with nefarious activities, Michael took a hard line against her in a move that screamed of his expected unending loyalty from his children, the same that he gave to his father. Michael may have placed his loyalty to his Family above anything else, a desirable quality in someone involved in organized crime where perhaps nothing is more important than what you will do, and not do, for the Family. We saw in The Godfather’s first installment, Michael was the only one who had been positioned away from his family’s enterprise but when it was made clear that his father was indisposed and neither of his two brothers were prepared to take over for him, Michael stepped up, proving he had the “mafia gene” all along with his careful calculations and quick-thinking in times of urgency.

It is clear that this honor being bestowed upon him from his religion’s epicenter and his desire to conduct business with the papal bank has Michael thinking about the path his life has taken and the choices he has made or been a part of. The Godfather Part III tracks Michael’s guilt over the lives he has been responsible for ending and his path towards a hopeful redemption. Catholic guilt is real, and seeing Michael have a Tony Soprano-like panic attack during his impromptu confession to the Pope makes it all too clear that this film, like The Sopranos that would follow less than ten years later, is interested in the mind behind the imposing figure of a mafioso. I like to think that David Chase is with me out there and was so inspired by this film that he decided to make an entire show about the themes explored, but I digress.

What had before and since been thoroughly explored through cinematic depictions was the tough and unphased mobster that did what he had to do for the Family just as anyone would do any job assigned to them. It seems clear, however, that Francis Ford Coppola was interested in using The Godfather Part III as a vehicle to explore what is going on in the psyche of a person with such a “job.” Coppola also seemed interested in dealing with other complicated themes like aging, setting up a business for posterity, being faced with intense changes to what you know and have grown up around for your whole life, repairing estranged relationships, the complicated nature of ones place within their family, and the existential reality one faces as they inch ever closer to the grim reaper’s call. 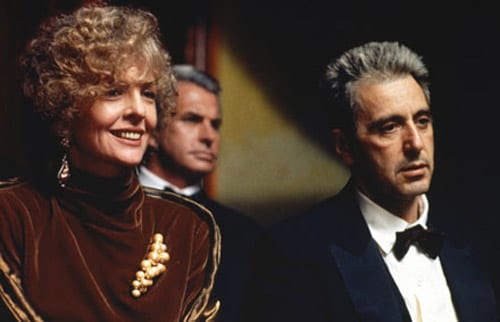 When the average film viewer thinks of a mafia movie, they’re not expecting to see a grey-haired man filling up his pill sorter for the week or having a diabetic episode requiring hospitalization or unable to control his tears while he admits to himself and to a member of the clergy that he has feelings of fault for the route his life has followed. Instead, we more instantly think of Henry Hill snorting coke or the Michael from the first Godfather calmly in a church juxtaposed with the hellscape of war he’s orchestrated on the outside or Sam Rothstein arranging a murder/burial in the desert. Such stark divergence in expectations is, in my estimation, the insurmountable roadblock that left Part III feeling like Rodney Dangerfield—getting no respect.

Of course, there is also the not too small problem of ageist audiences. Remember when Martin Scorsese (of all people) couldn’t get studio backing for his latest movie, so he went ahead and made one of the subtly best films of his career for Netflix and the first feedback we heard was that Joe Pesci “looked like a dinosaur” and Robert De Niro “walked like a robot?” It is difficult for many to get past a fifty-year-old lead, but a fifty-year-old that’s aged beyond his years to explore his feelings on his moral compass and impending death—forget about it. I’ve explored how hard it is for characters with wrinkles to get a fair shake from audiences: (The Lovers: An Age Positive Reflection on Relationships) A Critique on Ageism Through The Old Man & The Gun ) (Our Souls at Night) and this reality even impacted Michael Corleone himself.

The Godfather Part III then runs into the issue of the heavy punch it packs of its themes. Mob movies are a certain type of film escapism that carry the mystique of being so far removed from (most of our) everyday lives. They’re action films without falling into the tropes of the action movie while simultaneously carrying the glamor of an MGM musical—in other words—where else can you watch a bunch of shootings carried out by men in $4000 suits? The philosophical weight Coppola packs in his film that shows Michael visibly confronting the choices he’s made and how those choices have impacted not just him, but his entire family was an unexpected confrontation to make. Couple that with the exploration we get of Connie’s character (Talia Shire) deciding to leave the life she has attempted to lead independent of her family and fully integrate herself into the business as Michael did. Watching her not only willingly take over the role of matriarch to her family after her mother’s death but also going so far as to make decisions on Michael’s behalf when he’s incapacitated made The Godfather Part III much more Growing up Gotti than anyone expected, certainly.

Massive Genius (Bokeem Woodbine) said it best in The Sopranos when he stated: “”Godfather”, I seen that movie two hundred times. “Godfather II” was definitely the shit. The third one… A lot of people didn’t like it. But I think it was just misunderstood.” The film is not perfect—thankfully Sophia Coppola firmly decided that she had more to contribute behind the camera than in front of it, but mostly I think it suffered from not being what people expected. Francis Ford Coppola defied the odds two years after making the first entry in the trilogy by creating The Godfather Part II—the first film sequel to be given an Academy Award.

When viewing Part III away from the lens of its near-perfect predecessors, one can see the same sharp socio-political analysis, deeply human fully realized characters, and narrative power that made us all fall in love with the first two Godfathers. The film is an artistic, audacious closure to a film series that attempts to make a comment on the life beyond the hits and money-making endeavors of men in the mafia that finalizes the story of Michael Corleone in a way that neither previous film could have accomplished. The composition was such that demanded Michael receive a final tragic chapter. We already witnessed his wunderkind rise to organized crime royalty and the triumphs his family enjoyed under his helm, but the cycle of violence perpetuated in the mafia is one that will always come back to destroy its originator—just when you think you’re out, it’ll pull you back in.