Often times when a show ends, it goes to the great television beyond reruns or DVD releases. Some may find a new  However, there are a lucky few who receive the big-screen treatment and get a feature film. Or, like Avatar: The Last Airbender, they get a feature film that’s horrendously bad, thanks a lot M. Night Shyamalan. Though some film adaptations aren’t always gems, there are quite a few with some great qualities to them. For a television junkie like myself, I would have loved to see many shows that only lasted one or two seasons with great promise, get a movie to close all the storylines they left open. Most people who know me would easily expect to see this list flooded with Pokemon movies. However, there are plenty of other movies I wish to impart on the world. Also, for this list, I’m going to be focused on feature films that were developed from television shows. Movies that were direct to DVD (any of the Futurama movies) or those which debuted as a TV movie (Dead Like Me: Life After Death). Without further ado, onto the list.

When it first debuted in 1992, Absolutely Fabulous was a landmark in comedy. 24 years later, series co-creator Jennifer Saunders wrote a film that celebrates everything about the show. The movie sees Edina Monsoon and Patsy Stone on the run from the law after Edina is accused of killing Kate Moss. The movie is somewhat like the finale of Seinfeld in that it’s a believable plot but seems more like an attempt to bring all the characters who made Absolutely Fabulous so funny. This movie serves as a testament to Jennifer Saunders’ abilities as a writer. She managed to provide just as many laughs as a single season of the series and keeps the character’s personalities consistent with that of the series. Much like the other films on this list, it remains loyal to the series to a fault but unlike others on this list, the humor never gets stale.

Instead of taking on the London fashion scene, the trendy heroines decide to flee with Edina’s grandaughter Lola, mostly because Edina has reached her credit limit, to the south of France. It is later revealed that her secretary Bubble has been overpaying herself for years, enough to afford a palatial estate in Monte Carlo. Patsy and Edina are saved in the end when Kate Moss is found to be alive and decides to have Edina become her new PR representative. Considering that many of the episodes went above and beyond what some comedies would, the movie manages to stay on that level. Plus, we get to see a modestly happy Saffron, played by Julia Sawalha, who has a new beau in a police officer searching for her mother. Being just as over the top as the series, Absolutely Fabulous: The Movie never misses a beat.

After becoming a breakout comedy star from his appearance in the 1980 satirical comedy Airplane!, the only natural course of action was for Leslie Nielsen to take on the small screen. In a case of both fortune and unfortunate circumstances, the show, Police Squad! was canceled after only six episodes. At the time of its debut, Police Squad was one of several farcical shows to debut in the mid-late 1980s that failed after a few episodes. The show would come back as the legendary three-part film series, The Naked Gun. Since the show only lasted six episodes, there wasn’t much to be loyal to except for the style of comedy. Leslie Nielsen’s Lt. Frank Drebin was the zany hero who always captures the bad guy even if his partner Norberg, played by O.J. Simpson, had to get hilariously though brutally injured in each movie. All three movies were amazing, which is not something a lot of movie series can say, but as the crazy got dialed up, the better these movies got.

Loyalty to this show was on the rise when the first film was released. Sex and the City: The Movie finally shows Mr. Big and Carrie getting married after the six years spent watching their relationship only for him to tell her she was the one. However, true to form, Big leaves Carrie at the alter which comes as a shock to many. Things aren’t much better with her friends. Miranda has found out that Steve cheated on her and Samantha is uncertain about her love for Smith. Watching this movie is the equivalent of a whole season of the series due to both the movie’s long run time and the numerous plots extending over the course of year. It has become a shining example of a good romantic comedy film and was a great way to conclude the franchise. Then came the sequel.

Now there are three sequels on this list that are amazing. This is not one of them. As much as the plotline of Steve cheating on Miranda in the first movie is unbelievable, Sex and the City 2 had very little to offer the franchise but the campy comedy remains steady. I will fully admit to liking this movie for its comedic consistency with the series and first film, but the plot is not a reason to watch this movie. Sex and the City 2 sees the fab four go to Abu Dhabi after Samantha is given a chance to make her business international. Meanwhile, in New York, Carrie is trying to prevent her marriage to Mr. Big from being boring, Charlotte is nervous that Harry would cheat on her with her braless nanny, and Miranda is jobless after realizing her boss is a colossal douchebag.

Though it’s great to see a much less cynical Miranda, it was hard to watch Carrie get so mad with her husband for not going out every night and live the lifestyle she had during the series. It’s also a little unbelievable that Aidan, played by John Corbet, would coincidentally be in Abu Dhabi as well. As I said, the jokes and loyalty to the series are why you watch the sequel. There is always a love-hate relationship between me and Sex and the City but it holds a special place in my heart.

Are You Being Served? 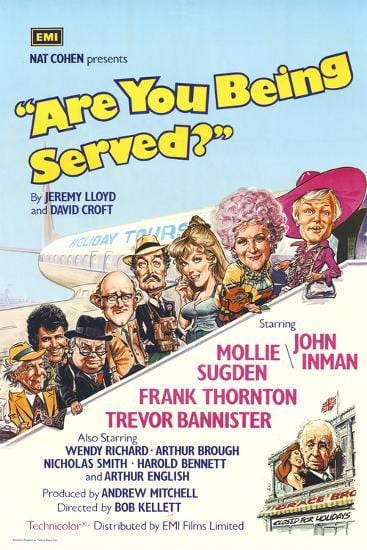 What would you do when your place of business is going to be redecorated for a few weeks. If you said you’d travel to a discount hotel in Spain, you must work at Grace Brothers Department Store. In the movie adaptation of Are You Being Served?, the staff of the store is taken to Spain on the company’s dime. While the movie is a great film adaptation of the show, it doesn’t raise a single original plotline once the characters get to Spain. It harkens back to many plots of the show’s first season. In the new atmosphere, this is something to laugh at as the show’s department store setting serves a minor limitation. Once in Spain, the group of Grace Brother’s employees, proceed to find themselves in hilarious situations brought on not just through their plans to have a good vacation but also a political protest that disrupts the area. The dialogue in this movie is laced with just as much innuendo as the series, and the physical comedy comes off great. It’s also sweet to think this was the final time the original cast would be together as Arthur Brough, who played Mr. Granger, wouldn’t return for the fifth season. Are You Being Served?, could have worked just as effectively as a television movie but having this movie, either way, is amazing.

As creepy, kooky and altogether spooky as the original Addams Family was nothing compared to their 1990’s film counterparts. Starring Raul Julia and Angelica Huston as Gomez and Morticia Addams, this adaptation of the classic sitcom has since become a 1990’s classic. The movie was able to develop on them macabre love between Gomez and Morticia, taking it from romance to wild steamy passion. It also advanced on the family dynamic of the Addams family, including what they would do for one another. In the first film, the members of the Addams Family find themselves the victim of a scam to get to their riches by their lawyer Tully.

He’s trying to convince them the son of a loan shark he owes money to is actually Gomez’s brother Fester, played by a lovably odd Christopher Lloyd. The movie ends with it being revealed the loan shark’s son was the real Fester who had amnesia. The movie turns the hammy sitcom family of the ’60s into a progressively effervescent family. Plus this movie gave us Christina Ricci as Wednesday Addams who shines throughout this movie but breaks out from the rest in the sequel Addams Family Values. When serial killer Debbie Jilinsky comes to the Addams House to work as a nanny after Morticia gives birth to a third child, a boy named Pubert. However, Debbie is actually a serial killer who weds wealthy men and kills them when she can’t get her way. She meets her match in the seemingly immortal Fester. She manages to separate the Addams Famly after sending Pugsley and Wednesday to a summer camp. She moves Fester away into a big mansion and cuts off all contact until she has killed him.

While the sequel never got as high reviews as the first film, it managed to blend the campy sitcom style with the dark humor of the original film. To say the least, it’s not the worst thing to come from the Addams Family franchise and certainly not the worst film to be adapted from the film. The movies are genius in showing that despite their unusual lives, the Addams Family has a strong bond that can never truly be broken.