I don’t know if I am the only one who does this, but from time to time when I can’t settle on something I want to watch, I will pick a random horror film and let it play in the background. I usually choose movies I assume I won’t really like, just for the noise while I do other things. Every once in a while I end up finding a great film that I wouldn’t have otherwise given a chance, and when I do, it’s my favorite thing. Finding a real favorite when I least expect it is like Christmas to me, so here are a few of my accidental horror favorites.

I hate to say that I wouldn’t have watched Alice, Sweet Alice, since I love old horror films, especially ones from the 1970s, but it just was not at all on my radar. The film popped up on one of my streaming services, and that was the first I had ever heard of it. I clicked on it immediately. Alice, Sweet Alice was filmed in 1976, but it’s set in 1961 and follows the lives of a divorced mother with two daughters. It first revolves around sibling rivalry as the younger daughter Karen, played by Brooke Shields, prepares for her first communion.

For whatever reason, Karen’s older sister Alice, played by Paula E. Sheppard, grows jealous over the attention Karen is receiving. Alice is seen acting out as a jealous sibling might do, being nasty to Karen the first chance she gets. The film really takes off when a string of slasher style murders take place. Alice, Sweet Alice has a little bit of everything; there is the mystery behind the killings, a creepy perverted landlord, family struggle as more of Alice and Karen’s family members are introduced, all set against a religious backdrop.

Alice, Sweet Alice has quite the cast of characters. So many, in fact, that just about everyone could be a suspect in the rash of violence and murder suddenly taking place. I remember thinking that I absolutely knew who the killer was and finding out I was wrong… I think. The movie keeps you guessing until the very end and maybe a little beyond. I don’t want to say too much—I think most of these movies are best if you go in blind—but Alice, Sweet Alice certainly delivers if you are in the mood for a ’70s horror slasher.

Hell House LLC is another found-footage horror, and I don’t know if I was just on a kick one day or what because it’s not usually my favorite sub-genre. It was a very happy find, though, and there are three installments in the franchise. The first movie is centered around a group of young adults that put on an elaborate haunted house each year. After a tragedy befalls the company, the film picks up with a documentary covering what happened the opening night of the tour.

I think it’s interesting that I was able to get so into the franchise because, along with not always loving found footage films, I am also not the biggest fan of haunted houses and hauntings. I guess it comes down to the movie just being done right. Hell House LLC kept my attention the entire time, even where there were the usual haunted house antics, like things moving by themselves or people refusing to leave despite mountains of bizarre events screaming that they should. I think what helped in this film was multiple mysteries going on at the same time, a few exciting twists, and a delightful cast.

I believe this movie is another example of going into a film and thinking it’s going to be just one thing but instead finding that there are multiple layers and being pleasantly surprised. I have watched all three movies, and aside from about 15 minutes of one of them, I really enjoyed the franchise. Hell House LLC is definitely not a movie I would have chosen with the expectation of loving it.

There are currently two installments of Creep, with a third possibly in the works. Probably. It’s been a weird year, and even back in March, Mark Duplass, one of the film’s main characters (as well as co-writer and producer), didn’t seem so sure about having a third movie. It seems Mark was not completely satisfied with the second film and wants to make sure the story goes above and beyond to justify a third.

Creep is essentially a found footage film that kind of spirals into the account of a complete madman. I don’t really know what it is about Creep that grabbed me. It may be that it started as a familiar found footage that took a sharp left turn, or perhaps it’s the extraordinarily bizarre and well-played characters. Not only is Creep a horror film but it’s also so, so awkward, it leaves you unsettled in multiple ways. Just imagine Michael Scott from The Office if he were violently insane—that’s about the level of awkwardness I personally felt.

Without giving too much away, a man named Josef hires a videographer named Aaron, played by Patrick Brice, to follow him around, explaining that he is a dying man that wants to make a video for his unborn son. Josef almost immediately starts putting Aaron in weird situations, like an interview with Josef in the bathtub as he pretends to bathe his future son. The bathtub scene is the first “WTF” moment and things only devolve from there. There are only two people in this movie, and it’s definitely low-budget, but what they were able to do with what they had is genius. I cringed a lot while watching, but I couldn’t look away; it’s a chaotic and insane good time. 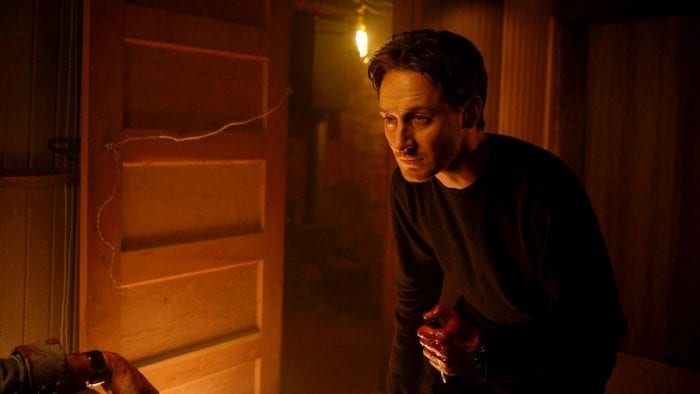 I want to preface this by saying torture-porn is not my go-to subgenre. I don’t have any real issue with the subgenre; it’s just not ever going to be the first thing I think of when I sit down to find a movie. That’s why The Collector was such a treat. The core of the story—blood and guts aside—is actually really unique.

Arkin, played by Josh Stewart, is a kind-hearted but down on his luck thief. In an attempt to get some fast cash, he plans to rob the home of his employer when the family is out of town. Easy enough, right? Arkin’s best-laid plans go out the window when he realizes that he is not alone in the house and that a much worse bad-guy is already in the middle of a heinous crime. I like to describe this film as Saw (this was initially pitched as an origin story for Jigsaw) meets Home Alone. The entire house is booby-trapped by a sadistic killer, and a game of cat and mouse ensues as Arkin attempts to save the family he was just about to rob.

Now, and this is important, this is not a big-budget film. There are unnecessary plot lines that kind of fizzle out and the continuity between The Collector and its sequel, The Collection is… well, its kind of so bad it’s funny. You can also tell that the budget got a big boost in The Collection because it goes off the rails in the best way. Arkin basically becomes some kind of superhuman anti-hero but also just a regular hero. It’s an entertaining franchise if you are willing to overlook a few issues and just strap in for the ridiculous ride.

There is a third movie in production that I have been impatiently waiting for since 2012, The Collected. The third installment was set for 2020, but with everything going on, I haven’t been able to get a release date, and IMDB shows the status as “filming.” I am really hoping that I get to see it this year.