The first season of many shows is never the best one out there. People are still figuring out what the show will be, the writing is setting up plotlines for the series, and things are just getting started. The second season is usually where things pick up and come into a life of their own. For NBC’s Just Shoot Me!, this is just how things went. The first season dealt with Maya Gallo (Laura San Giacomo) deciding whether or not she was going to work for her father Jack (George Segal) at his fashion magazine, Blush. Rounding out the cast was Enrico Colantoni as Elliot, the magazine’s photographer, Wendie Malick as Nina Van Horn, an ex-supermodel turned fashion editor, and David Spade as Dennis Finch, Jack’s wise-cracking assistant.

Considering the first season only had six episodes, Just Shoot Me! used its second season to expand on more than just the backstory of its characters. Season 2 starts with “The Experiment,” in which Maya wants to do a story about how good-looking people have it easiest in life. While her co-workers are sure she is just looking to exact revenge for the fact she was not made a cheerleader in school, she is determined to be proven right. Maya sets up a dumb model and a smart salesman for a job interview, and the model gets the job. However, there is a problem when she finds herself attracted to him because of his looks and nothing else. 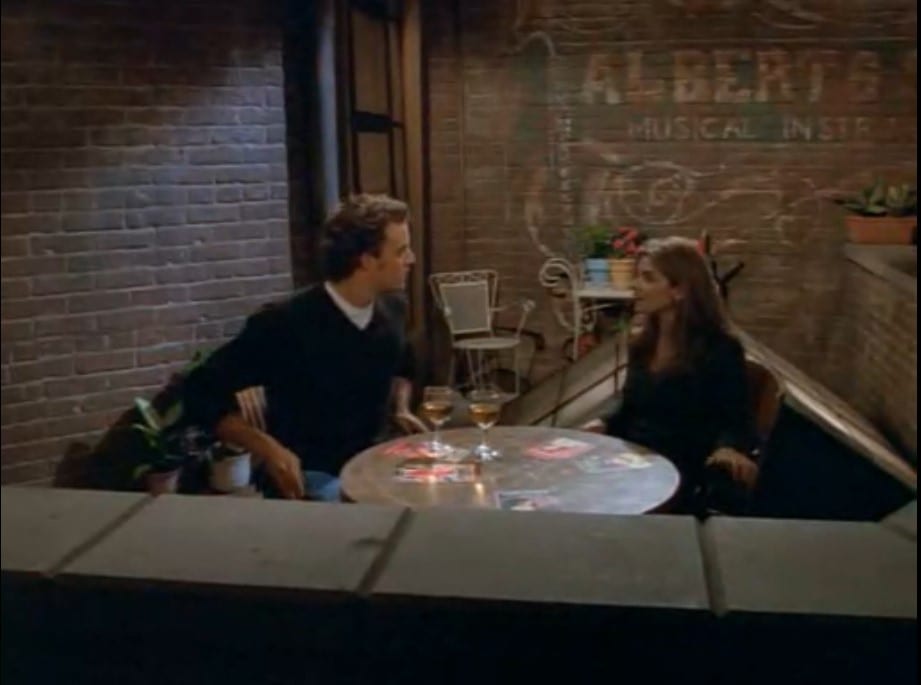 While this is a plot that could have been just as easily a part of the first season, it’s a great way to start Season 2 since the comedy of Just Shoot Me! would change throughout the second season, mostly through the storylines the show took on. One example of this comes from the sixth episode of the season, “My Dinner with Woody,” written by series creator Steven Levitan. In this episode, Maya writes an article about having a dinner and an incredible conversation with her film idol Woody Allen.

Her co-workers make fun of her of course, but then she gets a call from Woody Allen himself, or so she thought. “Woody Allen” is an imposter who bears a striking resemblance to him. Maya tries to get rid of him initially because she knows he’s not Woody Allen, but he follows her around trying to get a date with her. His plan works as she begins to live her life like a Woody Allen movie. A great black-and-white montage, done in the style of the acclaimed auteur, creates a great visualization for Maya’s transition from reality to Woody’s world. 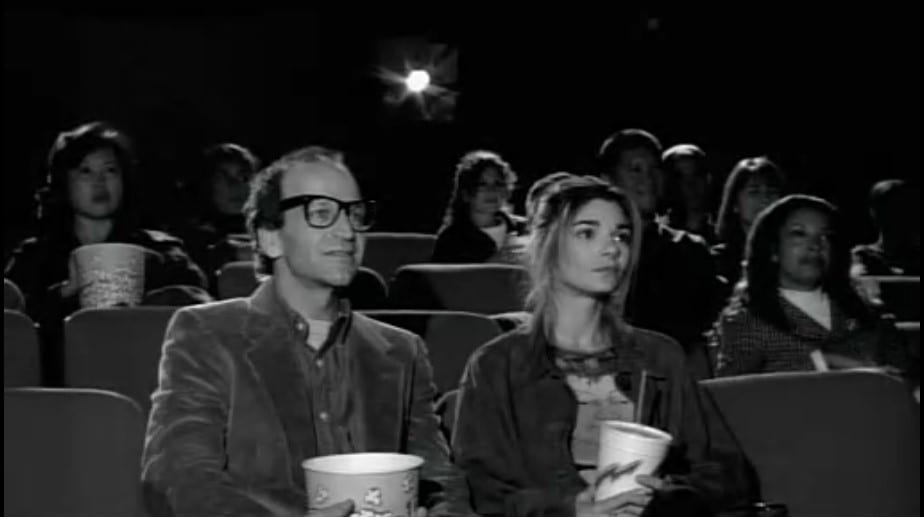 This all comes crashing down when Elliot reveals that “Woody” is a former mental patient who impersonates celebrities as long as someone feeds his delusions. She finally cuts ties with him but reminisces about what could have been. The episode is a stylistically different from all the rest, not just in Season 2 but throughout the series since it’s modeled as a tribute to Woody Allen. Just Shoot Me! developed episodes that were absolutely ridiculous but within the scope of reason such as “La Cage.” This episode finds Dennis in love with a model who is secretly crazy. She makes Dennis a part of the popular crowd but he finds that incredible sex and pleasure is not a license for chaos. She goes so far as to lock Dennis in a cage even after Elliot, who went out with her, warns him about her wild side.

Along with the written changes to the series, Just Shoot Me! also began focusing on more than just on Maya’s life as the primary story. Season 2 was when this show pivoted to become an ensemble cast series that was more focused on the workplace comedy than that of Maya’s home life. This shines through in the episode “Old Boyfriends,” where Maya starts dating an older man who is her father’s age. While this makes for a sweet, but not saccharine, ending, it’s the B-story that steals the show’s laughs for sure.

Nina decides to get naughty with a window washer and flashes him after he flashed her. He is so shocked by this that he stumbles back and falls 20 stories, landing him in the hospital. Watching Wendie Malick’s back and forth with the window washer, as well as her fatally misguided attempt at finishing what they started when she visits him in the hospital, is hilarious. A scene where Maya and Jack are counseled by Elliot and Dennis, respectively, shows just how the characters are looking out for each other. Just Shoot Me! won’t move you to tears, but it will make you rethink.

Season 2 was when the show branched out to become an ensemble series and the characters weren’t as hated by Maya. It was a dynamic shift in the writing style of the show, especially because it brought the other characters into the spotlight. This season also got into warmer topics such as misunderstood family, which was also a great pivot towards better developing the backstory of the characters—something that would become a recurring theme throughout the next three seasons. In the episode “Pass the Salt,” we get the first look at Dennis’s family when his father, Red (Brian Dennehy) comes to New York City for a firefighter’s convention. 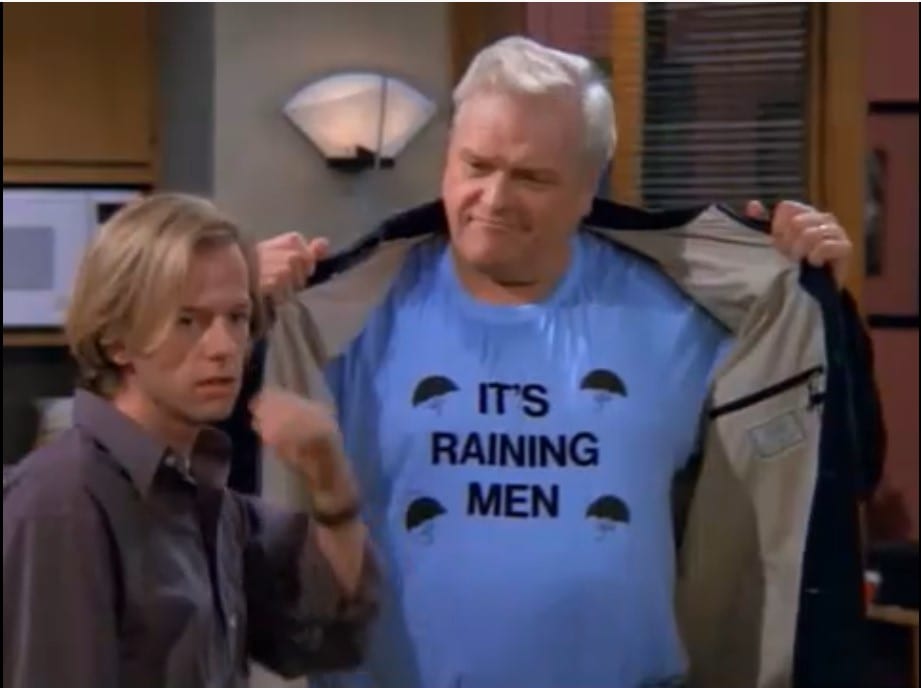 His father has never actually taken the time to understand him but always just assumed he was gay because he wasn’t as tough as his brothers, who are also firemen. Throughout the episode, Red attempts to bond with Dennis by thinking he’s gay and trying to get him to come out. Red only believes this further when Elliot kisses Dennis to prove he was lying to his father. it turns out that one of Dennis’s brothers is gay, but his father, blissfully ignorant, just though he had a very friendly roommate.

One of the best backstory episodes and an excellent showcase of camaraderie through characters comes from the “The Walk.” In this episode, Jack flies off the handle and has become angry with the staff. No one wants to go near him but they are concerned with what could be wrong. At one point they think he could be having an affair and won’t confess. Maya becomes worried about Jack having an affair since that’s what drove her parents apart. It turns out he and his friends from high school had a tradition of walking across the Brooklyn Bridge to a small diner every year to commemorate their graduation.

However, Jack’s friends can’t make it so the tradition seems to be over, but the staff rally together to make it a tradition they share with him. It’s amazing to see such warmth come from a series with a name like Just Shoot Me! and watch these characters come together in a moment of strife when they often butt heads. However, that’s what Just Shoot Me! was. The closing song, “Life Keeps Bringing Me Back To You,” was the real message of the show. For all the shortcomings of the characters, there was always a reason to move past it and make amends.

Other notable moments in the series include “Amblushed,” which shows Maya attempting to defend Blush and some of its smutty aspects during a feminist media seminar. Instead, she completely trashes the magazine and bad-mouths her co-workers. The side story for this episode is Nina making a return to modeling in a photoshoot that involves her wearing gold body paint. During the photoshoot, she ticks Elliot off, and he tells her the paint won’t come off without a special solvent he doesn’t have. 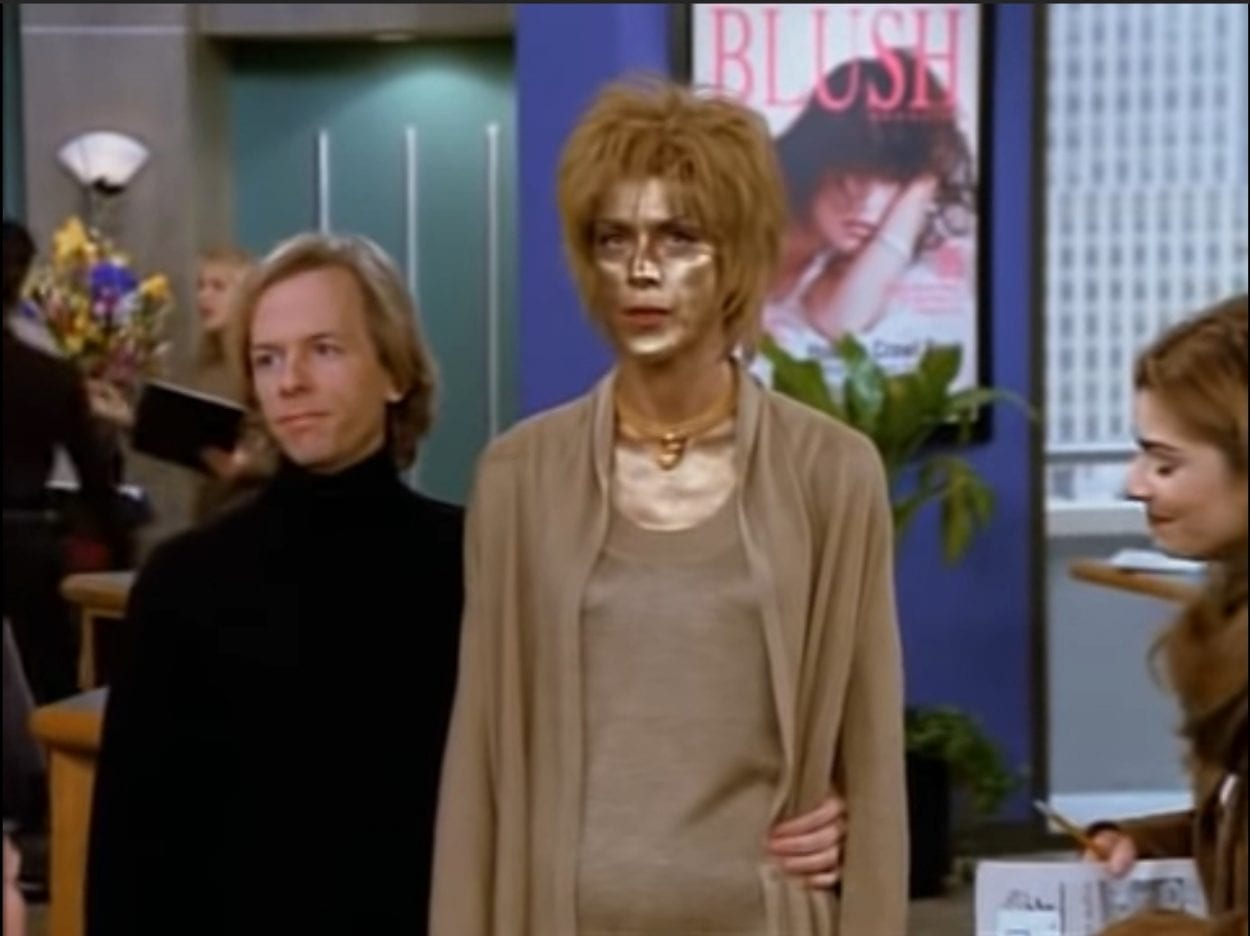 For the remainder of the episode, Nina is painted gold with everyone startled by her appearance. The longest laugh from the audience in the series comes from this episode, which is Just Shoot Me! at one of its few peaks. One of the final episodes of the season, called “Rescue Me,” is actually a sweet if not comical tribute to Jack Gallo as a person. It shows how the main characters each came to work at the magazine. It wasn’t because they applied but because Jack rescued them from a poorly dealt hand of fate.

Despite having seven seasons, this was probably the highest peak the show reached. Later seasons of the show got into Maya and Elliot dating, Jack’s marriage falling apart, Dennis going back to school and his weird cat obsession, and Nina’s dimwitted efforts to remain a member of the glitterati. The show wasn’t bad, but the humor in the later seasons was a marked change from the first two seasons.

Just Shoot Me! may not have hit the ratings and popularity heights of Seinfeld, Friends, or Will & Grace, but it was memorable for its ability to blend great comedy with heartwarming moments about friendships and family. Season 2 was the catalyst for the legacy it leaves about character development as well as the comedy in tragedy. 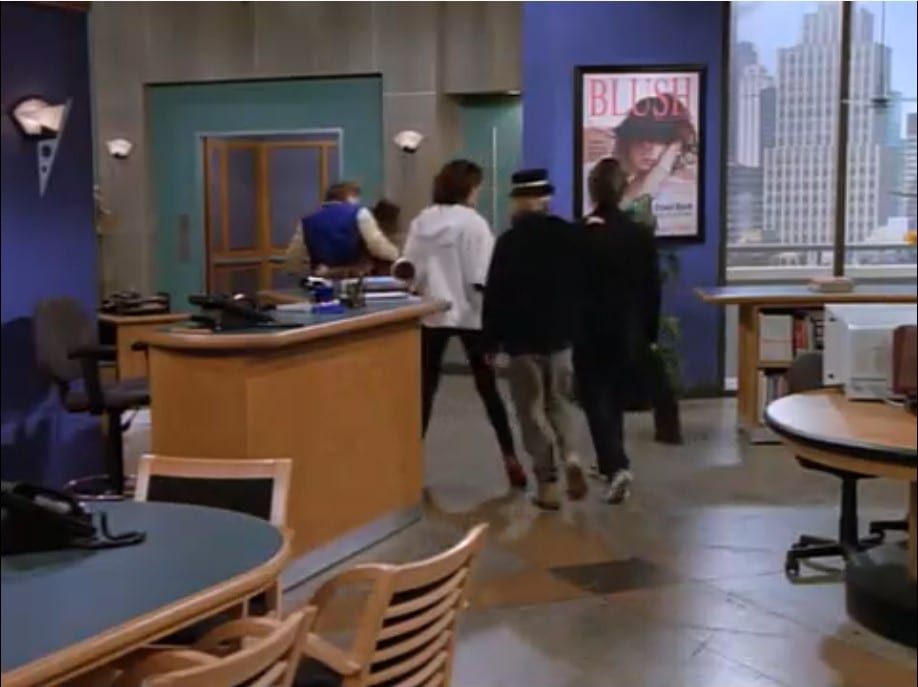