In the wake of an unfortunately steady modern-day news cycle of racially-charged civilian deaths at the hands of police, the timeliness of movies can echo. Kathryn Bigelow’s Detroit, taking us back to similar incidents in 1967, has been a timely film for three years now. Fast forward to 2020 and the renowned director’s polarizing film still has a relevancy that cannot and should not be ignored any longer.

The kicker is the story of Detroit, one of ten national uprisings in what became known as the “Long Hot Summer of 1967,” has been timely, ignorance and all, for over 50 years. It was timely a year later when after Dr. Martin Luther King, Jr. was assassinated. It was timely at Jackson State in 1970, eleven days after Kent State. It was timely in Miami in 1980. It was timely in Los Angeles in 1992.  It was timely in Ferguson six years ago and in Baltimore five years ago. 2020 may be the loudest alarm clock yet when it comes to timely. 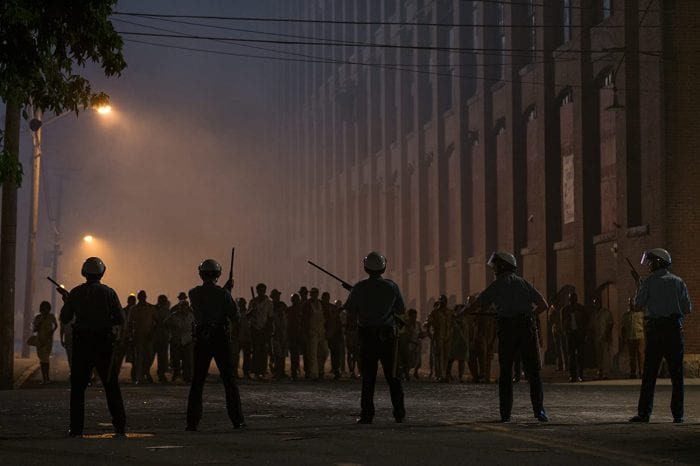 Bottom line, Detroit‘s history was timely next to any one of the over 50 ethnic riots that have occurred on American soil in the last half-century. This counts as better late than never. If it takes a piece of film entertainment telling serious stories to instigate hard reflection and improved new public dialogue, Detroit remains poised to accomplish such a mission.

In late July of 1967, the Detroit police force’s public dismantling and blanket arrests from a “blind pig,” an unsanctioned after-hours bar run by blacks, on the city’s near west side incited massive riots, the third-largest in U.S. history, and destructive looting that lasted for five days. It was enough for Governor George Romney to send in the Michigan Army National Guard and President Lyndon Johnson to call on the 82nd and 101st Airborne divisions to join them. The multiple Oscar-winning pair behind The Hurt Locker and Zero Dark Thirty, director Kathryn Bigelow and writer Mark Boal, apply a powerful dramatic license of independent research, dotted with archival flashes, to the trajectories of real-life citizens that collided one heinous night at the Algiers Motel in Virginia Park neighborhood.

A man (Jason Mitchell) brandishing and firing a starter pistol from a hotel window in the direction of the national guard, prompts a frenzy that has the nearby police and military personnel descend on the hotel. Caught in this ruckus are the original lead singer of The Dramatics Larry Reed (Algee Smith, carrying himself like a young Larenz Tate), his associate Fred (singer-actor Jacob Latimore), a returning Vietnam war veteran (Anthony Mackie), two white prostitutes (Hannah Moore and Kaitlyn Dever), and other tenants of the hotel’s annex. They are rounded up, abused, and forcefully interrogated for hours by a corrupt and racist trio of Detroit officers, led by Philip Krause (Will Poulter, backed by Jack Reynor and Ben O’Toole). Bearing witness (or is it complicity?) are Warrant Officer Roberts (Austin Hebert) and stalwart local security guard Melvin Dismukes (John Boyega). 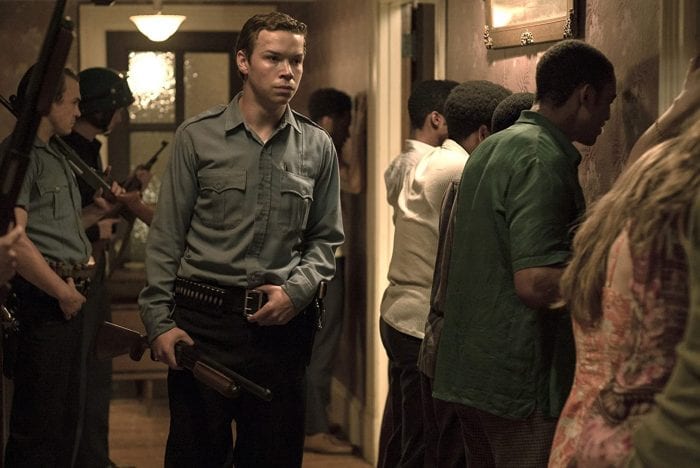 Shot with bracing and in-your-face voyeurism by Captain Phillips cinematographer Barry Ackroyd, to say what transpired has to be seen to be believed would be as equal an unfathomable understatement as saying what happened was hard to believe. The outlandishness hits home when the realization washes over that this is a real event. The harrowing hours of civil atrocities are soul-rattling, drenched with distressing emotion generated by intense performances. Star Wars star Boyega carries top-billing, but Algee Smith and Will Poulter stand out among the ensemble for conveying the yin of hope and the yang of evil. The tension and pain, flush with period-detail in production, could not be more palatable. 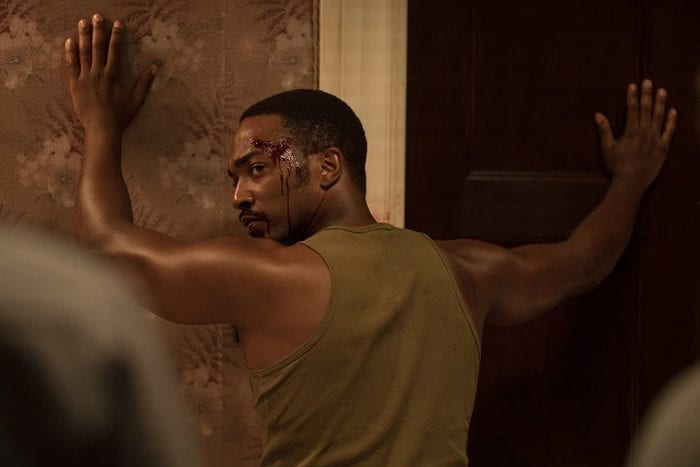 For a film like Detroit with difficult content thrust upon audiences to endure, this is not a place to seek entertainment or joy. Bigelow’s film wins sympathy easily (it better). Instead, Detroit is a challenge of cementing respect and achieving an empathy deeper than basic sympathy. Many similar historical dramas from the last decade (take Unbroken, for example) of agonizing events dwell on the agony and fail to provide contextual roots and reverberating rumination. Detroit succeeds in both with poetic hardship, between a deft montage of animated Jacob Lawrence “Migration” series paintings to open and an extended post-event narrative that lingers to punch further incensed body blows as strongly as the terrifying episode itself.

From a character standpoint, Bigelow and Boal present a bevy of poor choices meant to educate and enrage. No matter which side of the racial conflict and divide you examine in events like Detroit, so many fallen dominoes could have been avoided with mere seconds given to thought over those given to gross overreaction. Look and listen before you shoot a gun. Don’t shoot or pretend to shoot people carrying guns. Choose your words better. Look past the color of a person’s skin. Ask yourself if who or what you are provoking is worth the danger and risks. Realize the damage you cause can hurt others and your own community. Remember what you stand for and what you represent, from a working citizen all the way on up to a man with a badge or an elected official. The list of takeaway lessons is long.

By going further and chronicling the shock waves these characters endured after than the central incident, Kathryn Bigelow examines the larger systemic cavities of the history and its era. Most films would stop when people made it out and got to go home. Not here and Detroit‘s bitter resolution carries a stiff honesty. The extra minutes past two hours are important and necessary.

Finger-pointing or biased prioritizing can come in and deter from finding the real causes within a mess of embroiled issues. Detroit had the gall, even in the cool-down portion of the movie, to go there. The problem isn’t one thing, be that police criminality, racism, socioeconomic inequality, or loopholes of court corruption, or a simple isolated event or two. This is more than the 50 years since 1967. It’s 244 years and then some. For the history of Detroit, it was all of it, which points to the broken fibers and the fractured core of what is supposed to be a free and equal democratic system of governed rights. Systems fail people to a greater degree than singular problems, meaning larger corrections and reforms are needed, and it goes all the way to the top.

In light of whatever movement you follow when you leave a movie like this, step into a beyond-cautionary tale of history that school books skipped or have forgotten. Let Detroit stir and inspire conversations once again. Let the emotions, good and bad, come and talk about them. More positive change comes from that than silence and ignorance.