Midway through Kim Jin-Won’s new film Warning: Do Not Play, director Mi-Jung (Ye-ji Seo) and her partner Joon-Seo (Yoon-ho Ji) discuss the script she’s writing, a conversation that ends with Mi-Jung promising her friend and the viewers that this is “a horror film, so definitely not a happy ending.” She keeps this promise for Joon-Seo and for the viewer.

The confusion results from intertwining film narratives. There is the film we are watching called Warning: Do Not Play, which is filmed in a conventional movie style. There is the haunted film Mi-Jung is searching for called Warning, presented as a found-footage film. Then, there’s the film she is directing also called Warning, which appears to contain scenes from both of the other movies. The challenge when we watch is to know which movie we are watching or even who’s (or what’s) viewpoint we are witnessing. By the last act, the shots cut between found footage of the haunted film crew, the footage from Mi-Jung’s phone, several shots appear to be from cameras hidden in the rafters or the dark corners, though we come to realize this may, in fact, be the view of the ghost herself recorded to film… somehow. The timeline becomes confused as we see Mi-Jung appear to step into the past and interact with the characters in the movie she has been hunting the entire time.

Warning: Do Not Play is about a director/protagonist struggling with her own film-project, who latches onto the mystery of a haunted film as a possible source of inspiration for her own incomplete script. Elephant in the room—whenever there is a horror film featuring a strong female lead investigating a haunted videotape, Ringu (or The Ring remake) inevitably comes to mind. Don’t blame anyone for it, I thought the same thing, but the similarities between the films don’t last much below the surface level. Warning takes more notes from the shoe-gazing surrealism of Fellini’s 8 ½ than it does from the desperate investigation that drives Ringu.

The power of the seeing-eye, in this case, the director’s eye, and the inverse danger of seeing the forbidden are important themes in Warning. Watching horror unfold has nothing in coming with experiencing a horror unfolding. The camera, standing behind the camera instead of in front of it, can be a powerful protective device, which Warning emphasizes at every opportunity. One scene, in particular, caught my own eye. Near the end of the movie, as the layers of her reality are unfolding, we see Mi-Jung hold her empty hand out in front of her as she is attacked. Her hand is cupped in a distinctive shape, wrapped around a phone that isn’t there, as if she is filming her attacker, as if her body instinctually retreats to the safety of the camera’s eye to ward off evil.

What struck me was the physical similarity to the classic vampire-hunter wielding a crucifix scene in movies and her desire for her camera which she imagined could ward off the power of evil, drain it of its potency, or thwart its aggression. It was a parallel I might have brushed off were it not for the presence of two scenes featuring two different characters, both of them directors, with multiple crosses and crucifixes hanging from their office ceiling in a cloud around their head.

This goes back to Mi-Jung’s warning to her friend mentioned earlier—there is definitely not a happy ending. What the viewer doesn’t know at the time is that this isn’t an expression of concern, it’s a threat. Mi-Jung alone emerges from the events of the movie unharmed. In fact, she ends lauded as a wunderkind, making money for her studio and a hit film, with only her slimy studio producer at her side. Looking back, we realize our heroine has stolen, burglarized, lied, betrayed, and abandoned all in the name of making her movie, of getting the footage she needs. Though the overlapping films have become so confused at this point it’s not clear that the original Warning ever existed, or if everything we’ve seen has just been a representation of her creative process.

All of this is epitomized by a character telling Mi-Jung as she films his death, “You’re insane too,” meaning she is as obsessed with filming as the crazed director she’s been chasing through the film. There are several suggestions that the other director, Jae-Hyun (Seon-kyu Jin), may even be her own projection. The identification of scenes between them is hard to miss. As mentioned earlier, there is the same shot of each sitting under a grove of hanging crosses to ward off evil. Mi-Jung starts and ends the film sitting in a movie theater screening her own movie. We see Jae-Hyun in a flashback to the screening of his film, which apparently caused a riot within the audience from fear.

The only time we ever see Jae-Hyun with anyone other than Mi-Jung is during flashbacks or pieces of the original Warning, into which Mi-Jung herself is mysteriously transported as a witness and participant. It becomes clear that Jae-Hyun has made some sort of deal with the ghost or at the least has tricked his crew into the danger of the haunted theater from which he continuously flees, prompting the crew to grumble that he is always running off, when in fact he lurks in the shadows, watching their demise as a voyeur. Both directors are guilty of the insanity of sacrificing life to their art. 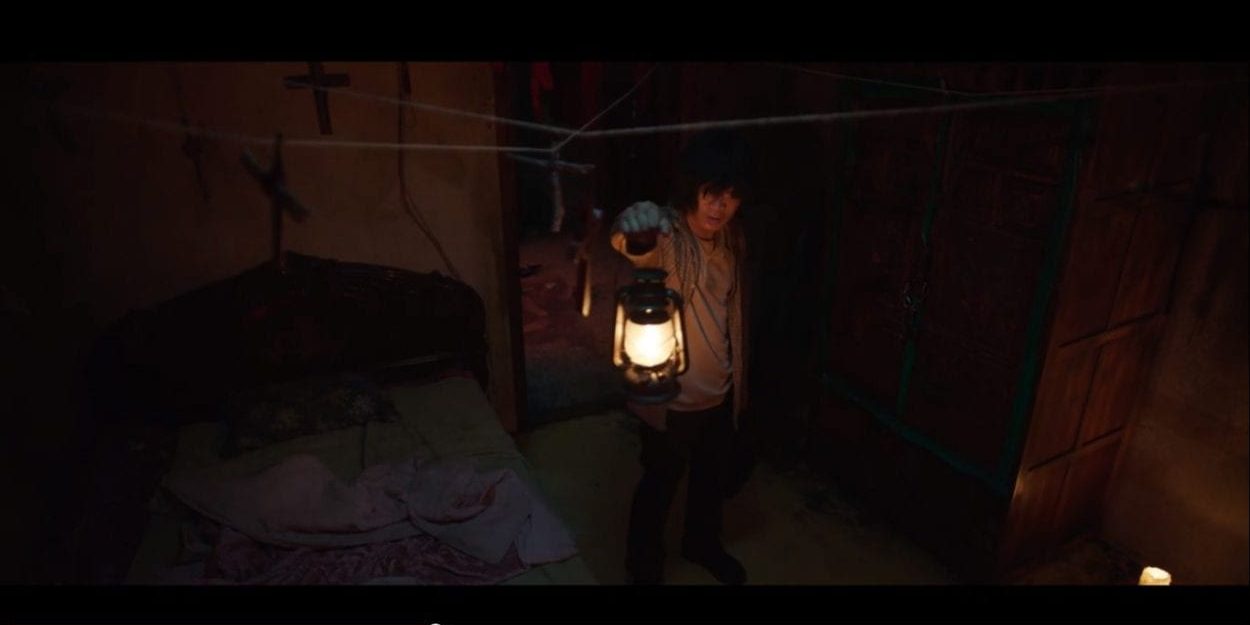 Shudder has done a terrific job over the years making sure that a diversity of horror-centered voices are represented on its streaming platform. Their Korean horror (k-horror) offerings have been particularly strong players across the board and Warning: Do Not Play is another solid entry in their international catalog. The acting is quality. The art direction and lighting have hints of Argento. It’s definitely worth watching and worth puzzling out your own solutions to its mysteries.