‘7500 is a Taut Bottle Movie With Unadorned Rawness’, is now available on Audio, read by the author, Don Shanahan, exclusively for our Patreon supporters. For just $3 a month you will have access to our full library of Audio content, plus three new uploads every week. To sign up visit our Patreon page: https://www.patreon.com/25YL

There’s just something about “bottle movies” that elevate tension a step or two better than films grander, louder, or flashier sometimes. Their draw comes from the mental mystery of the given confinements, and you don’t have to be a claustrophobe to feel that anxiety. It’s about the imagined suggestions one makes to visualize what they cannot see beyond the setting’s boundaries. Oftentimes our minds paint it worse than it actually is, and that is more than enough to get the pulse rate going oh so very well. The new Amazon streaming film 7500 joins those ranks as a choice little carafe of collywobbles.

This taut thriller directed by German filmmaker Patrick Vollrath in his feature-length debut never leaves the cockpit of European Flight 162. It’s a dark and cloudy night out the window in Berlin when German pilot Michael Lutzmann (Carlo Kitzlinger, actor and flight coordinator) and his co-pilot Tobias Ellis (the long-lost Joseph Gordon-Levitt) are welcomed to their stations by flight attendants Gökce (Aylin Tezel) and Nathalie (Aurelie Thepaut). Tonight’s hop from Berlin to Paris is scheduled at just under two hours, putting 7500 at damn near real-time.

The pre-flight instrumentation checks and settling-in time open the opportunity for some side conversations and character establishment between the seasoned pilot and his youthful-looking 31-year-old second seat. Gökce and Tobias are in a long-term relationship and share a two-year-old son. After a smooth takeoff and a turbulent rise to cruising altitude, the calmness is broken by a group of four combative passengers trying to storm the cockpit when the door is opened for the flight attendants.

After sustaining a sliced tricep pushing back the rush and re-closing the door, Tobias is able to subdue one attacker, but Michael is incapacitated. He takes over the controls solo and sends out a mayday call with the film title’s number which is emergency transponder “squawk box” code for a hijacking (you learn something new every day). The physical layers between Tobias and the unseen turmoil going on behind him on the rest of the plane are the one-way door on a switch and a small screen with a camera view of the attendants’ curtained vestibule station.

As urgency rises, there are no sky marshals aboard and the closest emergency landing possibility is a stormy Hannover 20 minutes away. Radio contact is steady and he has a microphone to speak to the rear if necessary. The terrorists are armed only with makeshift glass blades crafted from shards of duty-free liquor bottles and duct tape. There is patience required for the protocol of these circumstances. The book says to never open that door under any circumstance yet, remember, one of those people on the other side is someone he loves. When will a breaking point be forced and for which side?.

Cinematically, 7500’s creation of hemmed-in helplessness is shared by the viewer with unadorned rawness. Tight quarters shooting by cinematographer Sebastian Thaler captures the low-lit cockpit as a constrictive capsule of mounting dread and shrouded mystery. Like Tobias, our one digital porthole is a fish-eyed high angle broadcast in blurry and black-and-white where that curtain can dramatically block a longer view. 7500 is sharply scoreless in the musical department. Instead, the muffled screaming and belligerent pounding on the entrance is the inescapable rhythm, one only slightly dulled by the uncomfortable white noise of the airspeed whir that is normally supposed to be serene.

You couldn’t be more there with Tobias and that senses-poking ambience is constantly arresting. 7500 is a hearty welcome back for Joseph Gordon-Levitt in his first starring role in almost four years since Oliver Stone’s Snowden. He stepped in as a scheduling replacement for Paul Dano, and his valiant Everyman quality is welcome here is this cold sweat of a film. In someone else’s hands (and heart), this would be a glamour project of Hollywood heroism. Rather, zero machismo is flaunted where realistic and pained stoicism is exuded by JGL at every moment in a film where the camera rarely leaves his veneer.

One fair-minded knock against the plotting of this pressure cooker written by Vollrath and Sened Halibasic is its insistence to play off our encrusted, yet still easily-triggered, post 9/11 fears. 7500 employs virtually nameless, faceless, and madness-minded Muslim terrorists as its antagonists. Moving as swift as intended, this was not the kind of movie for character development beyond Tobias, but the writers offered one indecisive radical named Vedat, played by Omid Memar, for an ineffective hint of sympathy. Sharper and better adversaries and motivations could have been construed to match the premise. 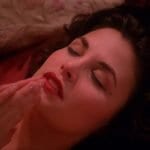