Not the cheeriest opening to an article, I know, but stick with me. I’ve come to bring you inspiration.

Back then, between the ages of 22 and 25, the mental health issues that had wrought their way with me since I was 16 were arguably at their peak, without really realising that they were mental health issues and with no one around me who could or would tell me that I did and that I needed help. Later I would be diagnosed as having a mild version of Borderline Personality Disorder, but even a mild disorder, by its nature, can pull its owner into some skewed, despairing shapes.

I had just finished University and was full of the romance of writing and poetry as being a transformative, subversive, and counter-cultural experience. I was full of Rimbaud, Camus and the Beat writers at the time, and had a specific, certain and idealised vision of what the world should be in general, and could be more individually for me. I saw the lives, the minds, and the works of the writers under Rimbaud’s lineage as a model, a template for life. I was about to be bitterly disappointed.

Part of that was the world I was about to enter, and part of it was me. Socially uncomfortable to the point of being physically scared of people, I kidded myself into taking a call centre job collecting unpaid bills, a job I was awful at (too scared of confrontation) under the pretence that this was a temporary move whilst I wrote the Best. Novel. Ever.

Certainly, my expectations were unrealistic. If you’re learning to write and you’re constantly comparing yourself to the greatest writers—Orwell, Plath, Kafka, Burroughs—then of course nothing you write will compare. Your mind has set itself up to failure by unfair comparison. My standards were too high and so I disregarded draft after draft, novel attempt after novel attempt, as I disgusted myself that I wasn’t Camus or Raymond Chandler. My craziness was driving me further into craziness and preventing my creativity from reaching any kind of completion or fulfillment. I would be trapped in a job I detested for the foreseeable future.

Not only that, but my university friends had all gone back to their home towns, and I went back to mine alone, the small Midlands city of Stoke-on-Trent, a tiny place that was stuck like English Northern towns in a post-industrial malaise. Unlike places such as Manchester and Sheffield, though, Stoke was unable (and still is) to reinvent itself and shake itself out of its depressed rut. Quickly I began to mirror my home town’s depression but could not accept it, as many of its locals did.

On returning, I didn’t really have any friends left in Stoke, and the ones I did have at the time, although we enjoyed each other’s company, it was safe to say that outside of the fact we didn’t really have anybody else, we didn’t have too much in common. I had no one to share my passions, my dreams, hell, my arty pretensions with. I didn’t know how to speak to people, let alone meet new ones. I was out on a limb, and I was very, very lonely. What hope for the future?

And yet, as it always has done for me, music pointed the way out of the mess. It was the language I understood myself through, defined myself by, even. It inspired me; gave me energy; dropped me into new cultures, new ways of thinking; gave me new ways of dressing, talking; it linked me to different parts of history, film, art, literature; and, most importantly, it gave me empathy and understanding—two things I was much in need of in that period.

Somewhere in the spring/summer of 2009, I came across a copy of Joni Mitchell’s classic confessional album, Blue. The album was recorded in a sparse, intimate folk-rock style, often with just piano, guitar, and Appalachian dulcimer, and of course, that rich, emotive, lived-in voice. Intentional or unintentional, the album became a place for Joni to pour out the collected pains and traumas that she had collected throughout her short marriage to Chuck Mitchell and her difficult relationships with both Graham Nash and James Taylor, as well as from giving up her daughter, Kelly Dale, for adoption.

Joni herself commented on the hyper-personal nature of the songs, saying that “there’s hardly a dishonest note in the vocals. At that period of my life, I had no personal defences. I felt like a cellophane wrapper on a pack of cigarettes. I felt like I had absolutely no secrets from the world and I couldn’t pretend in my life to be strong. Or to be happy. But the advantage of it in the music was that there were no defences there either.”

The album taught me that vulnerability can be a strength, that emotional honesty is necessary, however painful. But the album wasn’t without hope, as the set’s final song would prove. It was this song that spoke to me the most. 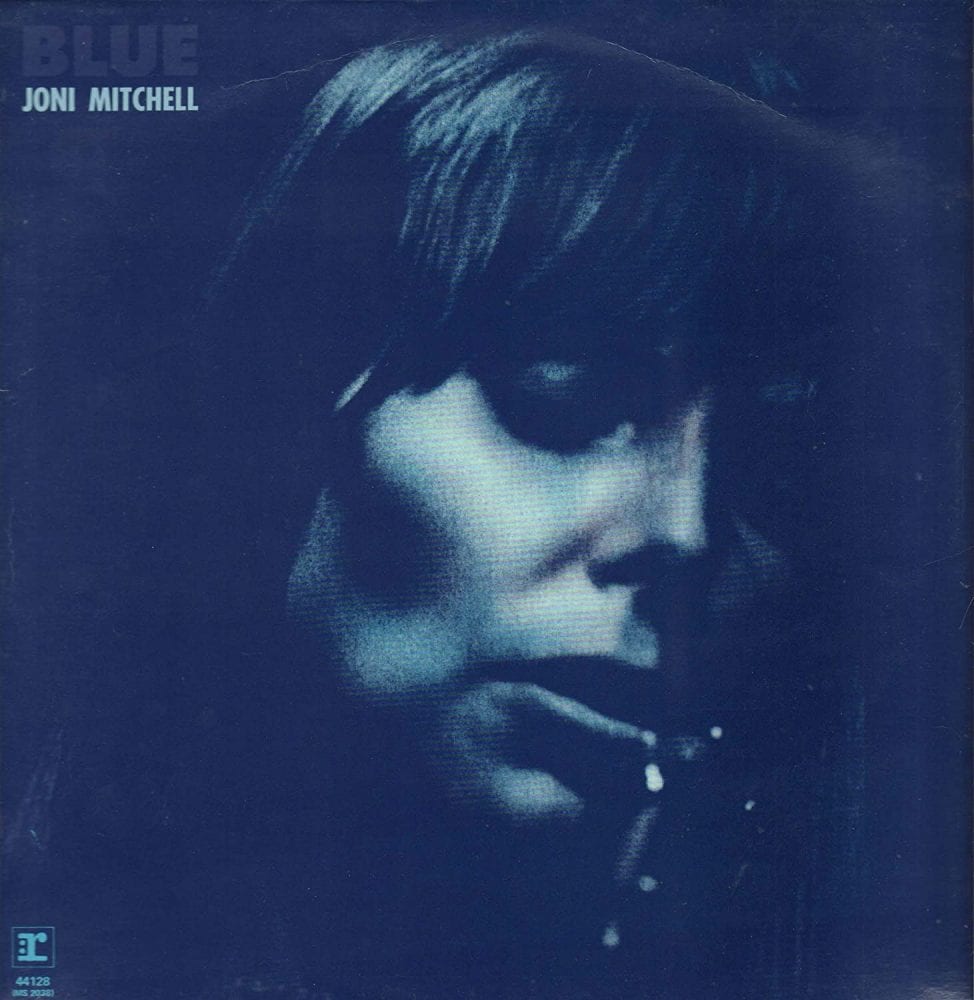 “The Last Time I Saw Richard” is widely believed to address Joni’s marriage to Chuck Mitchell, but to me, it was a story of how the romantic or poetic sensibility was at risk of being snuffed out by cynicism and the mundane pleasures of everyday consumer culture. At the time I heard this song, I was walking an emotional tightrope between the two positions. I hadn’t found a way to reconcile my highly idealised, romanticised vision of life to the realities of everyday working life. This song took the two positions and proclaimed that you didn’t need to reconcile anything; that you could be beautiful and romantic in defiance of a mainstream culture that neuters any kind of poetic sensibility.

The “Richard” of the song was going through the same dilemma as I was. He chastises Joni for having eyes “full of moon,” diminishing her romantic sensibility as nothing more than a cheap greeting card cliché. Taking his cynicism further, and because he can’t truly feel like she does, which is really what he wants but is unable to, he takes his pain out on her, telling her instead that she is deluding herself with pipe dreams:

“You like roses and kisses/And pretty men to tell you/All those pretty lies, pretty lies/When you gonna realize/They’re only pretty lies...“

But the only person Richard is kidding is himself. Like me, he’s drawn to music, and if there’s anything that’s a conduit and a mirror for a person’s soul, it’s music. For all his cynicism, the jukebox selections betray Richard’s real emotions, and Joni for one sees through it:

“Richard, you haven’t really changed, I said/It’s just that now you’re romanticizing/ some pain that’s in your head/You got tombs in your eyes/but the songs/You punched are dreaming/Listen, they sing of love so sweet, love so sweet/When you gonna get yourself back on your feet?/Oh and love can be so sweet.”

When indeed. I didn’t know myself when I’d get myself back up and running again. And sadly, for Richard, he never did.

See, the cynicism can win out. It doesn’t devour, it dulls. Where there’s no feeling, there’s no pain but there’s also no potential for euphoria, for the ecstasy of living, however fleeting that feeling may be. It’s a static prison sentence of nothingness that deceives with the comfortable living of its material endorsements.

Richard sadly traps himself amongst his luxury material possessions (a dishwasher and a coffee percolator), but the comforts of home and a seemingly loveless marriage are no substitute for real romantic feeling: “He drinks at home now most nights with the TV on/And all the house lights left up bright.” Even the lights pin you pathetically to your sofa, unable to think or act in any way. In no way was, or is, that a way in which I want to live, paralysed by inertia and mediocre pleasures.

But then Joni comes back in to talk to herself back at her cafe table, and it’s these final words which gave me the hope and the strength to continue to find and work towards some kind of romance in the world.

Joni’s voice drops to an angry, deeper tone as she increases in volume to snap:

“I’m gonna blow this damn candle out/I don’t want nobody comin’ over to my table/I got nothing to talk to anybody about.”

I could relate to that isolated anger, bitter at a world I couldn’t relate to and nothing to say to it anymore. But Joni didn’t stop there.

In words so beautiful and concise, it articulated some passion in my soul in a way that I hadn’t been able to before, and gave me hope where I had run empty of it, sung with a voice so engaged, so passionate and sensuous, so honest, came these simple, optimistic phrases:

“All good dreamers pass this way someday/Hidin’ behind bottles in dark cafes/Dark cafes/Only a dark cocoon before I get my gorgeous wings/And fly away/Only a phase, these dark cafe days”.

It was exactly the balm I needed: a beautiful soul who had passed through their own moment of doubt and cynicism but had come out on the other side to report back that this pain was only transitory and that, with courage and hope, the feeling of finding oneself at the end would be transcendent. Every time I reach that last verse when Joni’s voice swells with emotion, I get a lump in my throat. It’s that meaningful to me.

Eleven years later, I’m finally in a place I want to be, writing regularly and, I hope, writing well about topics and works of art that mean the world to me and inspire a romantic approach to the world, alongside a team of wonderful, creative people. Yes, it took time, but those butterfly wings finally cracked through the cocoon. If I could go back in time, I’d tell the 2009 version of me to have courage, that good things will come with time so don’t submit to despair, have as much fun as possible and, last of all, keep on clutching this perfect song of hope to your heart.

Chris Flackett is a writer for 25YL who loves Twin Peaks, David Lynch, great absurdist literature and listens to music like he's breathing oxygen. He lives in Manchester, England with his beautiful wife, three kids and the ghosts of Manchester music history all around him.