This week, we sail the seas, do a little dance, and crack the ol’ whip. It’s time to see what games are trending in our own personal zeitgeist this week in another edition of We’re Just Playing…

I’ve been dusting off my shovel and hunting for treasure in Sea of Thieves lately. This is something that I didn’t think I’d find myself doing again because, from the very first time I set sail, my relationship with the game has been somewhat problematic.

I played it at launch in March 2018 (and have the commemorative day one eye patch to prove it), thought it had lots of promise, but felt the repetitive grinding nature of gameplay and lack of a single player story mode meant it wasn’t for me. Yet something made me keep it installed on my Xbox. Maybe, deep down, I still wanted to be a pirate.

Cut to two years on and after some gameplay tweaks, new daily and timed challenges, a wider variety of weapons and bigger focus on narrative-led adventures courtesy of the Tall Tales storylines, Sea of Thieves has drawn me back in like few releases manage to do. Case in point, Warhammer: Vermintide 2 and co-op prison break title A Way Out both dropped at the same time, and I’m not playing either of them anymore, let alone writing about them.

Apart from just then, obviously.

Sure, Sea of Thieves is still not made for solo play. There are still trolls who will lurk at outposts waiting to overrun smaller crews and steal all their stuff. There’s still no save mechanic to speak of, barring being able to resume from Tall Tale checkpoints here and there. The annoyances from launch day remain.

Yet maybe just having more time to throw at a title that rewards prolonged play is helping me overlook the flaws. Perhaps it’s because I’ve interacted way more with the Sea of Thieves community this time around, whether it’s younger players figuring out what they enjoy in the game – “I like being a repair boy or a cannon boy, ” explained one young gamer on voice chat – or grown men role-playing as captains, shouting orders from the crows nest like extras from Pirates of the Caribbean.

Maybe it’s because—depending on my mood—I can either dive into a full-on ghost galleon battle or just slink away to a quiet part of the map and go fishing on my own. It’s…therapeutic. It’s whatever I want it to be on any given day. I may be a little bit in love with it.

Of course it’s also likely I’ve simply been drawn back by the addition of companion monkeys, cats, and parrots that follow you around, freak out during battle, or even dance when you play them a sea shanty. You can even give them eye patches of their own for goodness sake.

But they’re still not having my launch day patch. I’ve earned that one.

First off, Dean, welcome to our team! Good to have some XBox representation here on the site, as it was lacking.

As for myself, I recently picked up Shantae 1/2 Genie Hero for the Switch, as it was on sale in the eShop, and I couldn’t resist picking up another excellent game from the folks at WayForward, who rarely disappoint.

Having played previous games in the series, I felt right at home playing this gorgeous platformer, going so far as to have mild deja vu. I felt like I had played the game before. Sure, the plot to these games all usually follow the same basic story, but this was eerie. Then I encountered a townie who made the meta-comment in the picture below and I realized, even they don’t know if this is a reboot, a soft reboot, a re-imagining, or a remake.

The Shantae series is excellent platforming, with clever and fluid controls, and animation that outdoes most cartoons you see on TV these days. On top of that, the writing is top-notch, and the comments Shantae and crew come out with make me genuinely laugh.

The game length is short, and you could probably beat it in a few sittings, but there are extra modes and bonuses that can extend the playtime length. I highly recommend it, and any of the other games in the series as well. 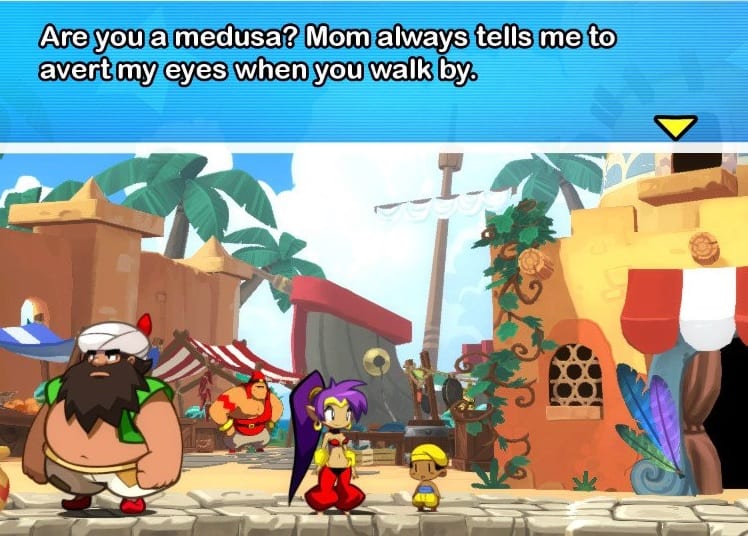 This week I impulsively bought, started and completed 2001’s Castlevania: Circle of the Moon. It’s actually my second time owning the game. Like a lot of people, I’d picked it up when the Game Boy Advance originally released, what with it being a launch title for the system. Back then, I couldn’t get head around it and instead found myself favouring Super Mario Advance and F-Zero: Maximum Velocity (the other two noteworthy launch games). I picked it up again after being allured by the fantastic box art on the Japanese version of the game.

My experience with the Castlevania series up to that point had been unorthodox to say the least. I’d only really played two games. Namely, Castlevania 64 and Castlevania the Adventure—both of which I was (and still am) unashamedly fond of. I am ashamed to admit however, that not a lot has changed since then. It’s been a real blind spot in my gaming history so I’m happy to have finally added another title to that small list.

Circle of the Moon is the second of the Super Metroid-esque Castlevania games, having taken the blueprint from its predecessor, Symphony of the Night. The format that we now refer to as ‘Metroidvania’ is just as compelling here as it is in any of the other games I’ve played in that genre. The feeling of slowly charting a map through a maze-like environment—slowly gaining familiarity with the many rooms, corridors and doors—is endlessly satisfying. As is leveling up, finding gear and new abilities to help you make light work of the once intimidating undead enemies. The sparsely scattered save rooms make exploration tense and uncomfortable in just the right way. Player deaths feel punishing, but the knowledge gained from them is always invaluable.

While it didn’t do anything extraordinary, Circle of the Moon was a joyful way to spend 10 hours. It was perfectly paced, well designed, and provided just the right level of challenge throughout—it also had a cracking soundtrack. It’s certainly whet my appetite for more Castlevania. I’m currently eyeing up the digital copy of Symphony of the Night I downloaded in a PS3 sale and quickly forgot about. That one feels long overdue.

I’m the resident Castlevania freak here at 25YL, having done in depth articles on the first seven mainline titles in the series. I stopped after my 2 part finale on Symphony of the Night due to the fact I never finished Castlevania 64, and lost interest in the series going forward (although Castlevania: Lords of Shadow was fun, if not really a Castlevania-ish game).

Luckily, Bloodstained: Ritual of the Night did a great job capturing the essence of Symphony, for those looking for a Castlevania adventure, now that Konami has gone straight Pachinko.