By 2002, the teen movie that had enjoyed a resurgence, and after a few years in the spotlight post-Scream was slowly fading out once more. With the success of the There’s Something About Mary and the American Pie series, teen comedy had made a move towards gross-out, or simply pretty people standing around in a romance with a great soundtrack. MTV films had made moves into the cinematic arena with a couple of flops beginning with Joe’s Apartment, Dead Man on Campus, and most disappointingly of all Alexander Payne’s Election in 1999. In early 2002, MTV films released a teen comedy that was a cut above most of the material aimed at the teen market, with great writing, characters, and comedy. So of course, nobody paid any attention.

Shaun Brumder (Colin Hanks) has led a fairly carefree existence in the Californian suburb of Orange County. Spending his time surfing and goofing around with his friends, things take a major turn when Shaun’s surfer pal Lonny dies trying to surf a big wave. Post-funeral Shaun finds a book on the beach written by Marcus Skinner which blows his mind, and his life’s purpose is set. Shaun gives up the amount of time he spent messing around and sets his mind to becoming a writer. Shaun excels at school, setting himself up for the eventual goal of being accepted at Stanford University and studying under his hero and inspiration.

Complications ensue when the high school sends Stanford the wrong transcript and Shaun’s application is rejected. When he tries to correct the problem, he finds he has to rely on the family he may be trying to escape. His brother Lance (Jack Black) is a perpetual burnout and always high, his mother (Catherine O’Hara) is depressed, possibly alcoholic, and in a marriage of convenience with Bob who is on his last legs. Then there is his high flying businessman father (John Lithgow) who is himself in an unhappy marriage with a younger woman who may be cheating on him. All this combines into a series of calamities and a last-ditch road trip where Shaun learns some valuable lessons along the way. 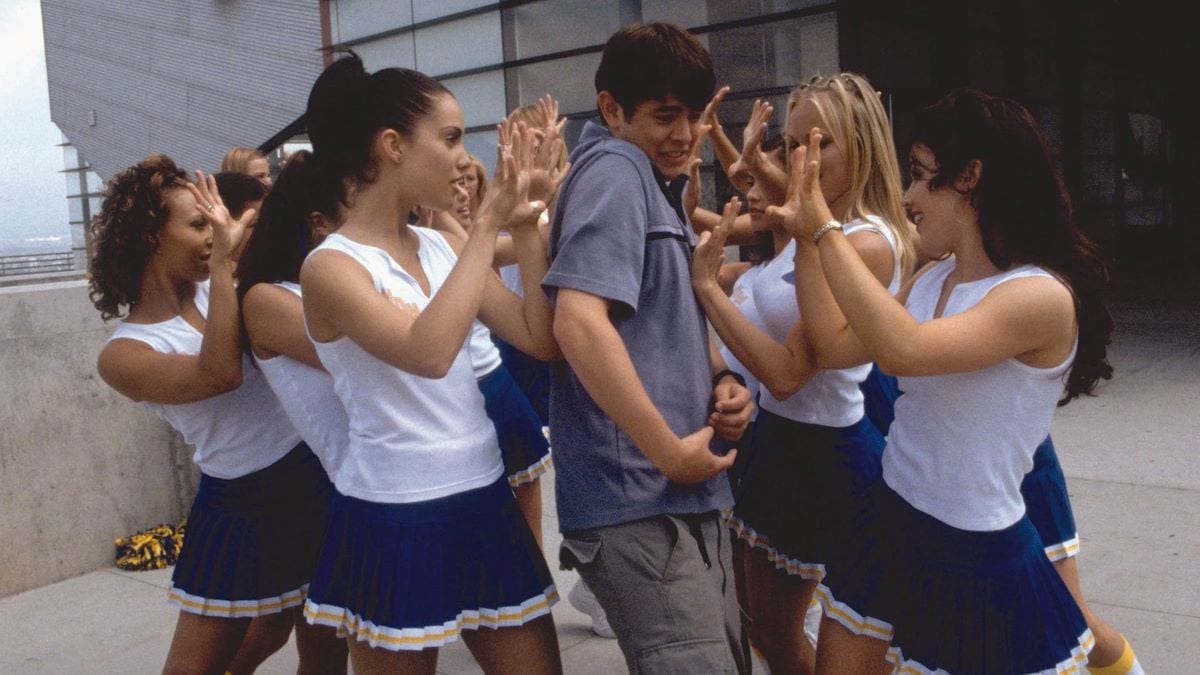 Curiously for a film produced by MTV, Orange County spends quite a lot of time pointing out the shallow nature of the teen pop culture of the time. Shaun finds himself baffled by schoolyard dance routines set to “Butterfly” by Crazy Town, and further puzzled by his English teacher citing Waterworld as being based on Shakespeare. We also have a scene with a brief cameo by Chevy Chase where a high profile literary figure is looked over in favor of Britney Spears as a graduation guest speaker. All of this sets up the main character as one who wants to escape his environment as he has outgrown it, which makes his quest all the more important.

The script for Orange County is a cut above most of the comedies of the time, thanks to excellent character work, and identifiable situations as written by Mike White (School of Rock, 2003). None of the people close to Shaun want him to go to Stanford for their own personal reasons. His mother for one wants him to stay as she feels she has given a lot up for her son, married a new man for money so that he and his brother would not want for anything. His father doesn’t believe in his son’s career choice of becoming a writer and wants him to inherit the family business. Both of these parental figures hinder their son by either refusing to help in a time of crisis or by creating drama in front of the people who could help. The characters and situations perfectly illustrate that Shaun’s family and location are kind of a burden and something that keeps him from fulfilling his full potential.

Ultimately why this maybe feels dated if at all is because it revolves around rich white people denied the benefits of their existence. The setting and the problems of the 1% do not fly in this day and age as something to garner audience sympathy. However, the yearning for more and the obstacles placed in one’s way by family or incompetence is something we can all identify with. A big part of why this works is because of Colin Hanks. In Orange County he gives a performance which is very much like his father Tom’s work in comedy pre-Big. Colin seems to have the same comedic timing and tone of voice when exasperated which really brings back the memories. It’s surprising that he didn’t go on to have more of a comedy career based on his work here.

What sticks with you, and adds pathos to Orange County aside from the genuinely funny comedy, is the way in which through this stressful journey, Shaun comes to terms with his surroundings. Even a sub-plot uses one of the vapid high school airheads to its advantage, which wouldn’t have happened had he been elsewhere. Whilst on the Stanford campus through a series of misadventures, Shaun sees the same dance routine to Crazy Town played out in a place that he saw as an escape from this very thing, and the literary students he meets, seem to have the same shallow focus on the material they study. 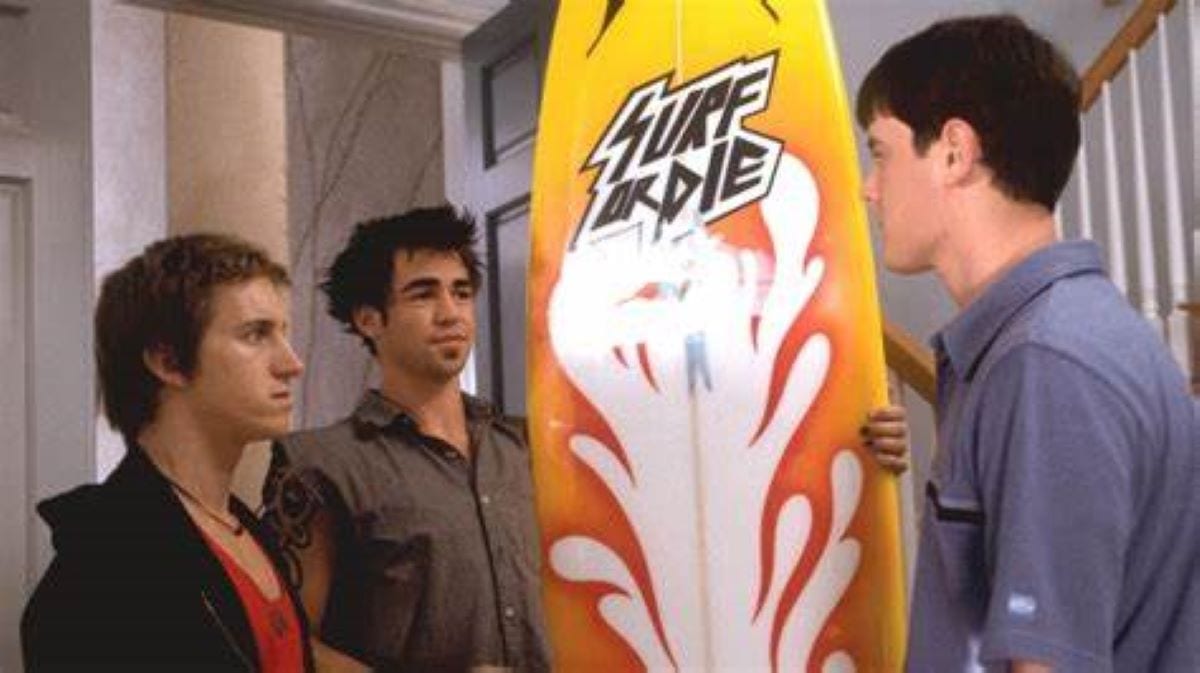 When Shaun eventually meets Marcus Skinner (a brief appearance from Kevin Kline) he gets validation of his talent and realizes that he may need his dysfunctional family and environment to actually write in the first place. I have often found this to be true in my own life, there is no way I could write what I do without my depression and neuroses, and in that sense, I need to be where I am. The terrible current state of the world has only made me work harder. Skinner makes Shaun realize that in his own short story, he demonstrates that he loves and needs the people on whom he has based his characters.

Despite some positive reviews and a Foo Fighters music video with heavy MTV rotation, Orange County didn’t really do all that well when it was released in early 2002. It had a solid January box office opening, but then struggled to only 43 million worldwide and went straight to DVD in many places. As a result it has largely been forgotten in the same way as Jake Kasdan’s underrated Zero Effect (1998). Kasdan would bounce back, he ended up directing the mega Jumanji reboot franchise in the end (which also feature Colin Hanks.)

We often lament our stations in life and those shackles of dysfunctional families that hold us back. Maybe looking at these people and situations in a different way is the answer. More often than not, great writers are products of their environment. Perhaps these circumstances can be viewed as blessings in life and things that propel us onwards. Some of the time anyway…