I am an Eminem fan, but I wouldn’t call myself a “Stan.” When Eminem makes bad songs or even bad albums, I won’t lie to myself and say that everything Eminem touches turns to gold. In the last decade, I would say Eminem has had just as many misses as hits. From Recovery through Music to Be Murdered By, Eminem’s impact has been far less than when he was a worldwide cultural phenomenon in the late 1990s and early 2000s.

Eminem first hit the mainstream in 1999 with the single: “My Name Is.” I distinctly remember when “My Name Is” debuted, you could not escape it or Eminem, whether it be non-stop rotation on MTV, to radio play, and magazine covers. Eminem had exploded onto the scene. Upon release, I felt super lukewarm to the smash single—the style of Eminem’s raps along with the abundance of ad-libs made for a musical experience that I did not appreciate, and still don’t. “Role Model” was the next single out and did little to change my mind on what I had heard thus far. When “Guilty Conscience” was released, I finally found a song that piqued my interest. Even with an eyebrow raised, based on “Guilty Conscience,” though, I passed on purchasing The Slim Shady LP.

Coming off the previous, multi-platinum success of The Slim Shady LP plus having a hit, lead single in “The Real Slim Shady,” you could feel the excitement for his forthcoming album: The Marshall Mathers LP. And the album did not disappoint. Debuting on May 23, 2000, to critical acclaim and the highest-selling debut week for a rap album ever, The Marshall Mathers LP has to be considered one of the highest peaks in Eminem’s storied career. Quickly hailed by critics as an instant classic and smashing record sales, The Marshall Mathers LP became the biggest and most talked-about album of the year.

I, like most, picked up a copy of The Marshall Mathers LP, the first week of release. The tracklist featured a who’s who of guests including Sticky Fingaz, Snoop Dogg, Dido, and D12 with production mainly handled by Dr. Dre, Mel-Man, and Eminem. The album looked and sounded pristine, as would be expected from the talent involved. One song, though, stood out to me as a song that didn’t mesh with the rest of the album: “Amityville.”

With 2020 marking the 20th anniversary since the release of The Marshall Mathers LP, I figured now was as good a time as ever to revisit this unusual oddity.

Featuring a booming, almost mechanical, beat produced by Eminem and the Bass Brothers, Eminem “scraps” (screams and raps) the chorus, in a similar delivery to his song “Kim.” The vague chorus details murder and mental illness without much insight. Though not explicit, sans the title, the listener might initially assume that the chorus is referencing the murders committed by Ronald DeFeo Jr. at the infamous Amityville house. While not a super in-depth hook, the chorus sets the mood for the dark and macabre verses to follow.

Featuring Bizarre from D12, “Amityville” maintains the horrorcore themes that run throughout the album with the first verse rapped by Eminem. In this verse, Eminem details visiting a shrink, getting drunk, and slapping “bitches” over his short, 27-second verse. Pushing aside the minimal runtime of his verse, what we do get is par for the course. For this verse, it’s typical Eminem, with darkly comical themes that aim for the shock factor. There’s nothing that Eminem spits here that he hadn’t done earlier and better. 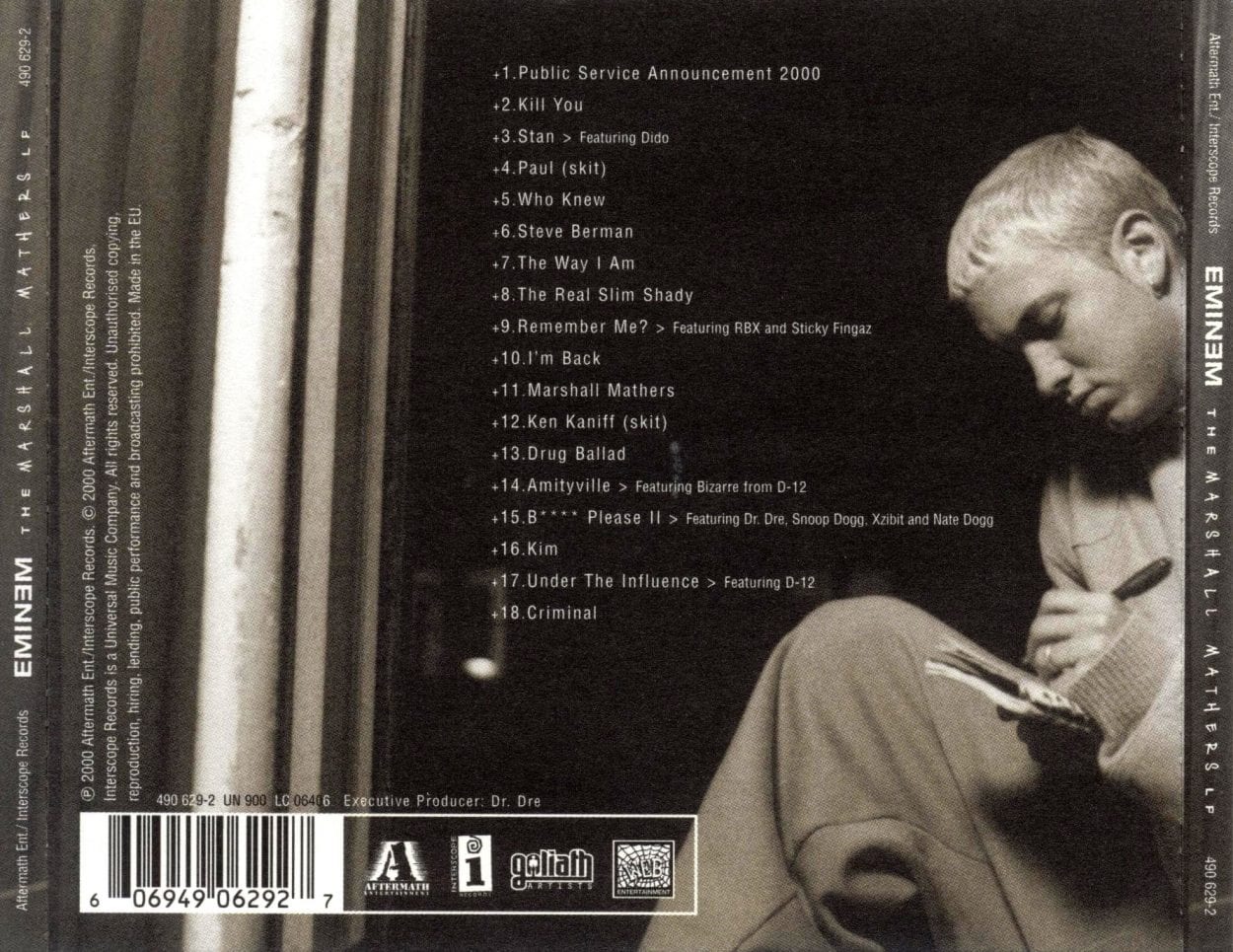 Speaking of shock factor, we come to Bizarre’s even-shorter, 24-second verse. Never been known for his subtlety, Bizarre immediately goes for the outlandish by rapping about murder, being drunk, and rape. If you are familiar with Bizarre at all, none of what he says should be shocking or unfamiliar. This verse comes off as Bizarre trying too hard to make something stand out and trying to throw every topic that could offend someone at the listener. It’s the equivalent of throwing spaghetti at the wall, with nothing sticking.

At this point in the song, I was ready to write this off as a track that should have been excluded from the album. With only a somewhat engaging chorus and two lackluster verses, why should anyone expect anything of substance with the third and final verse?

Leading in well from the screamed/rapped chorus, we pick up the third verse with Eminem delving deep into the title’s true meaning during a 48-second pilgrimage through “Amityville.” And when I say picking up, I mean it. Detailing the song title as a hellish landscape, also known as Detroit, Eminem ramps up the intensity by painting a picture of non-stop bullets flying through the air where anyone and everyone has a gun. Each person will use those guns in a matter they see fit including, but not limited to having “a cavity filled” and shooting it out with the police. Not letting up, Eminem states that once he “snaps” he “can’t be held accountable for” his “actions.” The verse crescendos to a boiling point of just unloading a thousand bullets onto a house, collapsing the foundation and leaving what’s left of the occupants in the house to be found later.

With one more run through the chorus and a final, serene outro, we have completed the four-minute and 14-second odyssey that is “Amityville.” We, the listener, can now take a breath from what we just experienced.

The third verse is a masterwork of storytelling and emotion that Eminem has failed to capture in later albums. Matching his anger with the depressing vision that he paints; verse three does its best to elevate a mediocre song to good. I’m not sure if Eminem should be praised for bringing his A-game in the last third of this song or criticize him for lowering my standards for the time wasted leading to the final verse.

Does the song succeed? That’s for each listener to decide. I consider the third verse of “Amityville” one of Eminem’s top 10 verses of all time, though the overall presentation is weak. In my opinion, Eminem takes a sinking ship of a song, launches a lifeboat, and tosses the listener a life preserver. When revisiting the song, and seeing what Eminem puts forth, you have to stand back in awe at the Herculian effort he produces on the third verse. It is truly the anthesis of going from a dumpster in the first two-plus minutes to fire in the second half. When taken in all together, this really could be classified as a dumpster fire.

To me, “Amityville” has always felt like a song that was cobbled together at the last minute. Delving deeper into the history of this song, there does seem to be some credence in that feeling as Outlawz members Pacewon and Young Zee initially recorded verses for “Amityville.” Pacewon states that he believes the verses he and Young Zee provided were deleted. Knowing that there was an alternate version of “Amityville” initially, and listening to the song now, it certainly feels like we ended up with an amended variant to what was originally planned.

Since music is subjective, there may be those out there who hate the third verse, or maybe feel this is a forgettable song in Eminem’s discography or even those who may enjoy the song as-is. Whether this is tops on your Eminem favorites list or is a song you skip every time it plays, or somewhere in between, I find “Amityville” one of Eminem’s most fascinating musical endeavors. Yet, funnily enough, I wouldn’t even put it in my top 50 Eminem songs.