My love of horror movies began as a child growing up in the 1980s. The ‘80s were an amazing time for horror films and franchises, in fact, some of the greatest franchises to date were born from this decade. Movies like Nightmare on Elm Street, Friday the 13th, Halloween, Poltergeist, and Evil Dead graced the theaters and continue to delight audiences to this day. Who doesn’t remember sneaking into the theater to see this new dream monster, Freddy Krueger, or to watch Jason Voorhees dice up some tipsy teenagers? These were the movies that gave us some of the greatest characters of all time.

To choose my favorite scenes was an exercise, to be sure. But one thing I loved about ‘80s horror was the first-person slasher scene. You know, the scene that puts you behind the eyes of the killer complete with heavy breathing and a bird’s eye view of the victim… those special scenes are both hilarious and terrifying. I could go on for much longer than my audience would allow giving recommendations on which movies have the best scenes, but I’ll contain myself by giving you five of my favorites.

Poor Michael. He’s had a terrible Halloween night. So, he takes us along as he saunters up the lane back home, peeks in the window to see his sister engaging in illicit teen behavior, and something snaps. We see through his eyes as he silently walks into the kitchen, puts on his clown mask (because clowns are terrifying), grabs a butcher knife, and walks upstairs to rid himself of that sister problem once and for all.

This scene has all the tropes of a good slasher death. Plus, a clown. But, in my opinion, the best part of this scene is that if it weren’t for John Carpenter’s exquisite score it would be almost completely silent. Michael says nothing as he walks into his sister’s room and surprises her while brushing her hair. The only thing we hear until Judith is dead is her yelling Michael’s name and the plunging of the knife into her flesh. The next thing we know, the mask is ripped from our eyes, the point of view is flipped, and we are shown our pint-sized perpetrator. Cinema perfection.

As a young girl, I drove my cousin crazy screaming, “What is he doing? Why are we seeing through his mask? Is he going to kill her?” Thus, my love of suspense and the first-person kill was born. 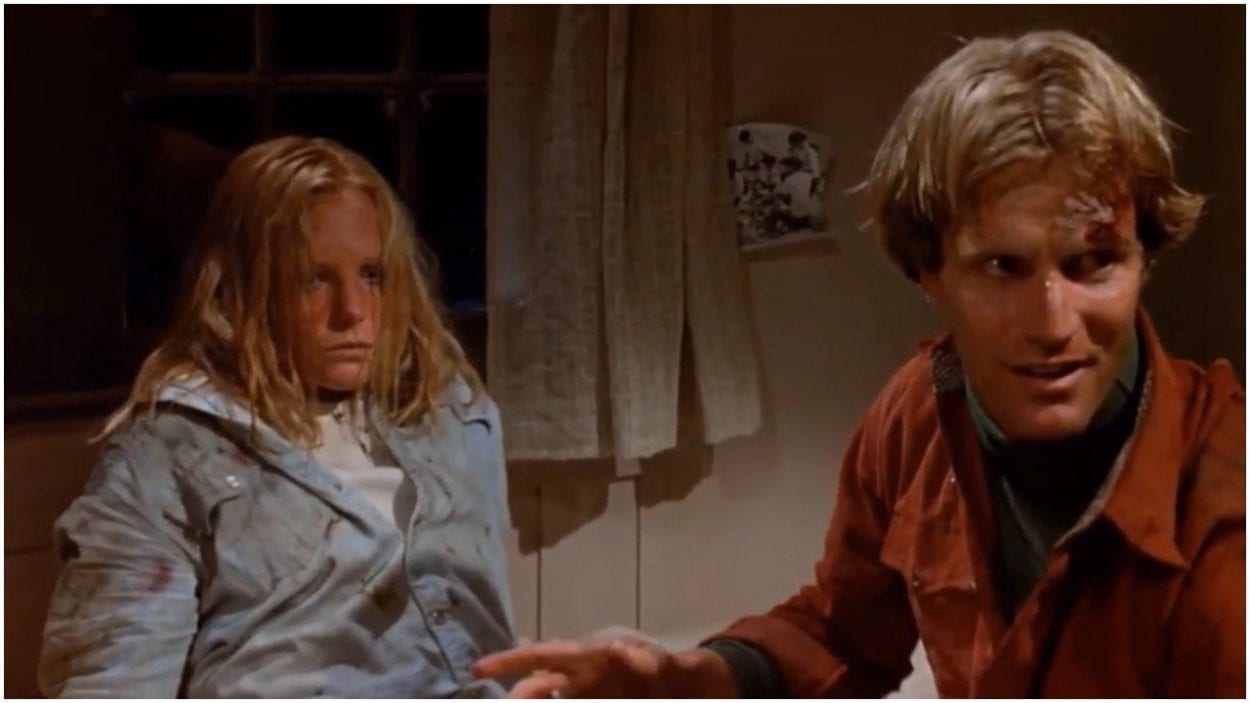 The first two Friday the 13th movies are full of fantastic first-person slasher scenes. One of my favorites is the killing of Vicky in Friday the 13th Part 2. Sweet Vicky. She would have been ok if she wouldn’t have come back to the cabin to find her friends. She would have even been ok if she would have left after no one responded to her calls. But she persisted and met up with the killer face-to-face—she did find her friends though, one was hanging on the door behind her.

This scene flips perspectives a couple of times but the actual slashing comes from the perspective of the killer. The viewer is even treated to the terror on Vicky’s face as she realizes she’s walked into something she shouldn’t have and won’t be walking away.

While originally released in the ’70s, Black Christmas (or Silent Night, Evil Night) is arguably one of the best first-person slasher films of all time. From the opening scene, the viewer is put in the slayer’s shoes, becoming the one who sneaks into the house, stalks the sorority sisters going about their business, and follows with a killing spree.

Have you ever felt like something or someone was in your closet watching you? Then maybe this scene isn’t for you. Here we see Claire feeling like she is being watched and so she walks toward her closet thinking it is possibly her cat, Claude. Unfortunately for Claire, it isn’t Claude, and she’s about to find that out the hard way. We later see some serious weirdness between the slasher and Claire’s corpse. 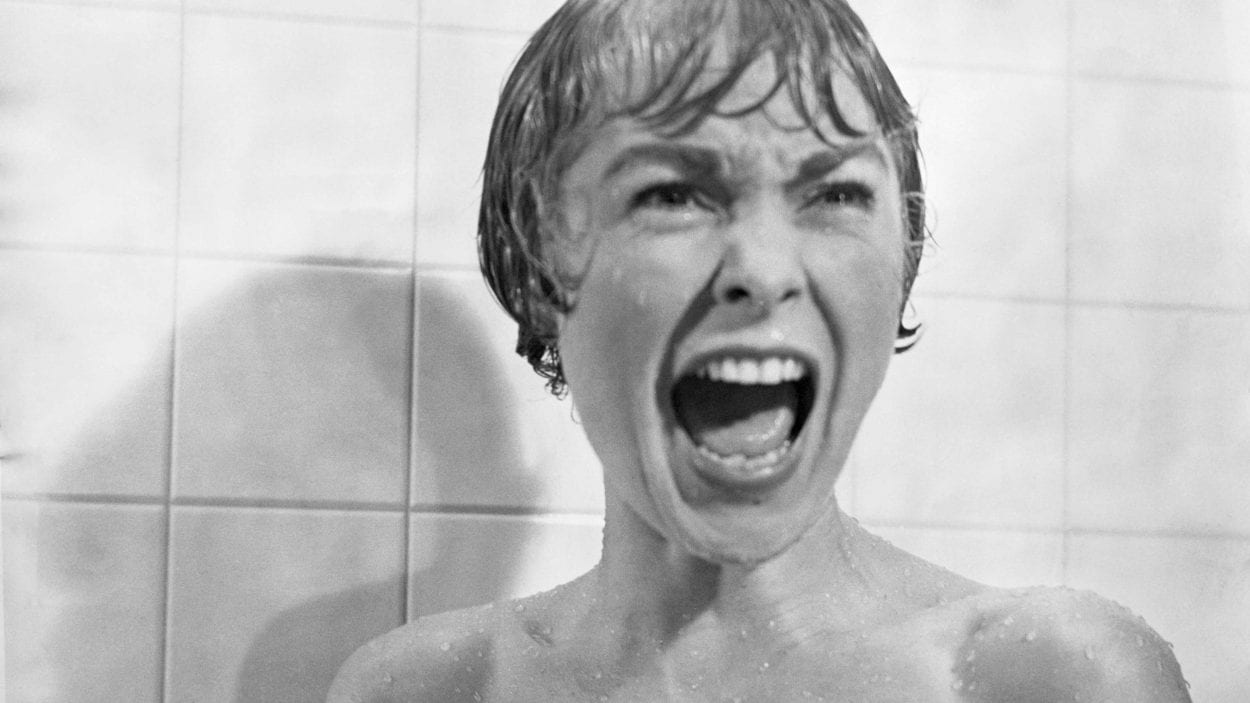 I’m sure I would be bombarded with comments and hate mail if I didn’t include the classic shower scene from Psycho—a film WAY ahead of its time. While not a true first-person POV killing, the scene does switch perspectives like a couple of other ones on this list and gives us the first-person POV when things get really stabby.

This scene was one of the original scares from a true master of horror and mystery: Alfred Hitchcock. And the victim was played by none other than horror queen, Jamie Lee Curtis’s mother, Janet Leigh. How many of you have seen more creative use of chocolate syrup? Wait, don’t answer that.

I love everything about this movie and can’t pick just one scene. Watch Maniac (the original) and enjoy it. The premise is classic slasher film: boy abused by his prostitute mother grows up and kills beautiful women, scalping them and using their hair for his mannequins.

The infamous scene where the killer murders a victim’s boyfriend (played by the great Tom Savini) was inspired by the Son of Sam murders committed by serial killer David Berkowitz. Savini, also the film’s make-up artist, was awarded the role after having made a cast of his own head, filled with leftover food and fake blood. No CGI there.

The film’s director, William Lustig, previously worked as a pornographic film director and used profits from one of his 1977 films to make this cinematic treasure. The film was originally designated by the Motion Picture Association of America as “for adults only,” however, a severely edited version of the film earned an R-rating and was distributed in limited release in the United States.

The film was remade in 2012 starring Elijah Wood.

There were so many great films between 1960–1990 that it’s hard to pick scenes from just a few. If you’re not familiar with the horror of the ‘80s, do yourself a favor and check it out (maybe start with Night of the Demons or Motel Hell). I guarantee you’ll find a favorite. If so, let me know; I’d love to check it out. Let me know what some of your first-person POV favorites are. I’m always looking to expand my horror knowledge.