“What kind of compromise goes into connecting with another human being? Is it meeting in the middle? Or going all the way to the end of the line? Philip Hayes found connection, but only with the darkest part of his soul. A region of self that he’ll inhabit for the rest of his life. Here, in The Twilight Zone.”

Thus spake our spooky Narrator (Jordan Peele) at the end of Season 2’s premiere episode of The Twilight Zone “Meet in the Middle”, available now, along with all the other nine episodes of the season, on CBS All Access. And what a welcome return to the screen The Twilight Zone is in these troubled times. The first season of the rebooted classic, which premiered in 2019, was mostly a success, offering some instant classics, some reimaginings of prior editions, and some controversial/political episodes that, based on some of the comments I received alone, shook up some viewers.

For those looking to avoid “politics” or an “agenda”, “Meet in the Middle” might not be for you. But then again, neither might be The Twilight Zone. Since its inception in the 1950s all the way to its arguably more “woke” counterpart in the 2010s and 2020s, The Twilight Zone has been about awakening human perception, and sometimes that is accomplished by looking at the nastier side of humanity and, thus, ourselves. “Meet in the Middle”, like “Not All Men” before it, one of those “controversial” episodes, looks at toxic masculinity. But, in true Twilight Zone fashion, it does so with subtlety, masking its meaning behind a tense and unique sci-fi premise. 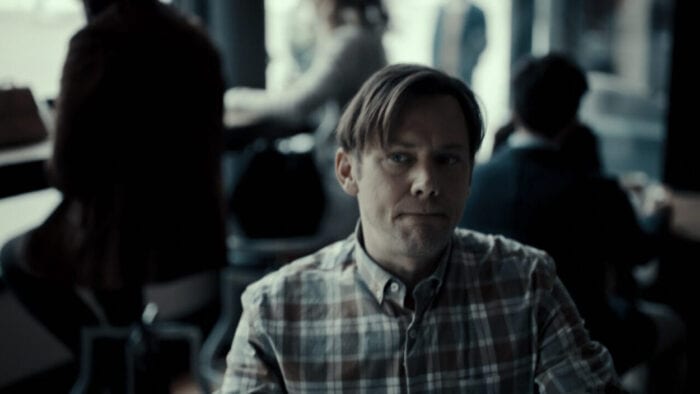 Phil Hayes (Jimmi Simpson) is an anxious bachelor looking for the right woman. One night on what he hopes is the right date, but knows isn’t, another woman starts talking to him inside his head out of nowhere. Thinking he’s going crazy, Phil visits his therapist who naturally thinks he has a disorder of some kind. But as Phil begins to “chat” with this new voice, named Annie (Gillian Jacobs), he comes to realize that the psychic connection is real enough, at least to him.

As the month’s pass, Phil and Annie engage in a “relationship”, getting to know each other and find solace in each other’s company even though Phil has no idea if Annie is even real. However, one day Annie disappears and Phil’s life collapses. Worried for both his own sanity and for Annie’s safety, Phil does all he can to locate Annie for real until, after months of lack of contact, Annie reappears, fearing for her life. Now is the time to meet, and Phil might need to save the day.

Written by two women, Emily Chang (who also appears in a small part in the episode) and Sara Amini, “Meet in the Middle” does the unique job of not only tackling the concept of isolation and madness to perfection, making the audience wonder for 95% of its running time whether Phil is truly insane or not, but also subtly plays with the concept of male “ownership” over females when it comes to relationships.

On the first front, “Meet in the Middle” works best when left ambiguous. When we are not sure if Annie Mitchell is real, the story really has pull. And even though the twist at the end does work, that Annie was real, the power of their psychic connection is real (and mercifully unexplained), and she set Phil up to kill her abusive husband through mental trickery, the episode would have best been served to leave Phil’s question of sanity open to interpretation. So, in one sense, you can’t fault the episode for an excellent “gotcha”. But at the same time, the majority of the episode built up such a fascinating “what if” scenario of Phil’s condition that leaving us hanging indefinitely would have been a deliciously evil bit of narrative sorcery. 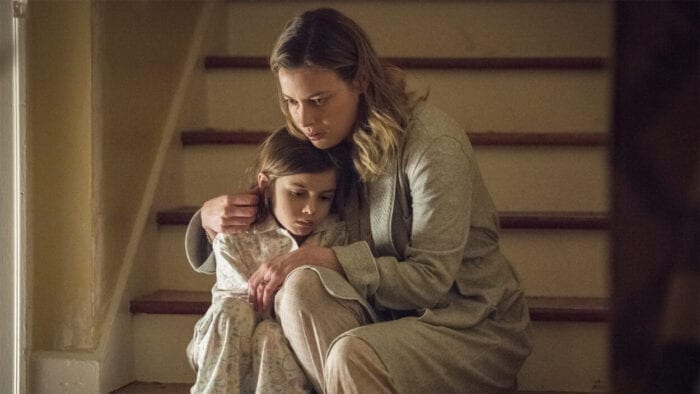 On the other, more subtle hand, we have the relationship between Phil and Annie. In the end, Annie ends up manipulating Phil to do her bidding but it is after using Phil’s reckless emotional state against him. Throughout their “relationship”, Phil, a lonely, nearly snobbish type, expects to find the perfect mate. The idea of compromise never occurs to him…to meet in the middle, so to speak…and when Annie falls into his lap…or mind, shall we say…he expects a fairytale ending. The keyword is “expect”. Their connection is so strong that he all but knows they will eventually meet and be together. Throughout their “mental” relationship, he is constantly pushing to meet and be closer even though she, being married and nervous, doesn’t want to. There is a sense of ownership Annie is expected to abide by and Phil simply expects that sadly comes naturally in a lot of real-life relationships outside of a big-budget sci-fi show.

On the technical side, Mathias Herndl pulls double duty on this episode, directing and doing the cinematography, giving the episode a claustrophobic feel. As we spend a majority of the episode in Phil’s mind, which is battered with intrusive thoughts, we are battered with an array of uncomfortable close-ups and intimate angles. We truly get inside Phil’s head which makes the personal moments, both the good and the bad, extra invasive. We feel like we are witnessing something we should not and as a result, the entire episode is cringe-worthy and uncomfortable (in that good way).

If stories will be this tense and nervewracking, we are in for quite a season. Tune in next week for our look at Season 2, Episode 2 “Downtime”.