This article was written by guest author Andy Hageman.

Mexican Gothic hews closer to literary horror with its nuanced character development, ambient conjuration of setting, and engagement with the genre conventions and tradition of the gothic novel. Over the course of the story, this novel implicitly shows readers how and why gothic horror is ideal for registering how haunted the present is by the past. When the protagonist, Noemí, a wealthy urban socialite, journeys out of Mexico City to take up temporary residence in a remote mansion with her cousin, who’s sent a letter desperately asking for help, she must face a convergence of hauntings. Past waves of colonization introduced structures of racist hierarchies, exploitative extractivism of materials like silver, and a patriarchy fueled by power and sexual conquest. Moreno-Garcia calls up the generic ghost of the gothic novel in order to investigate and exorcise spectres whose dead hands still touch the living today. 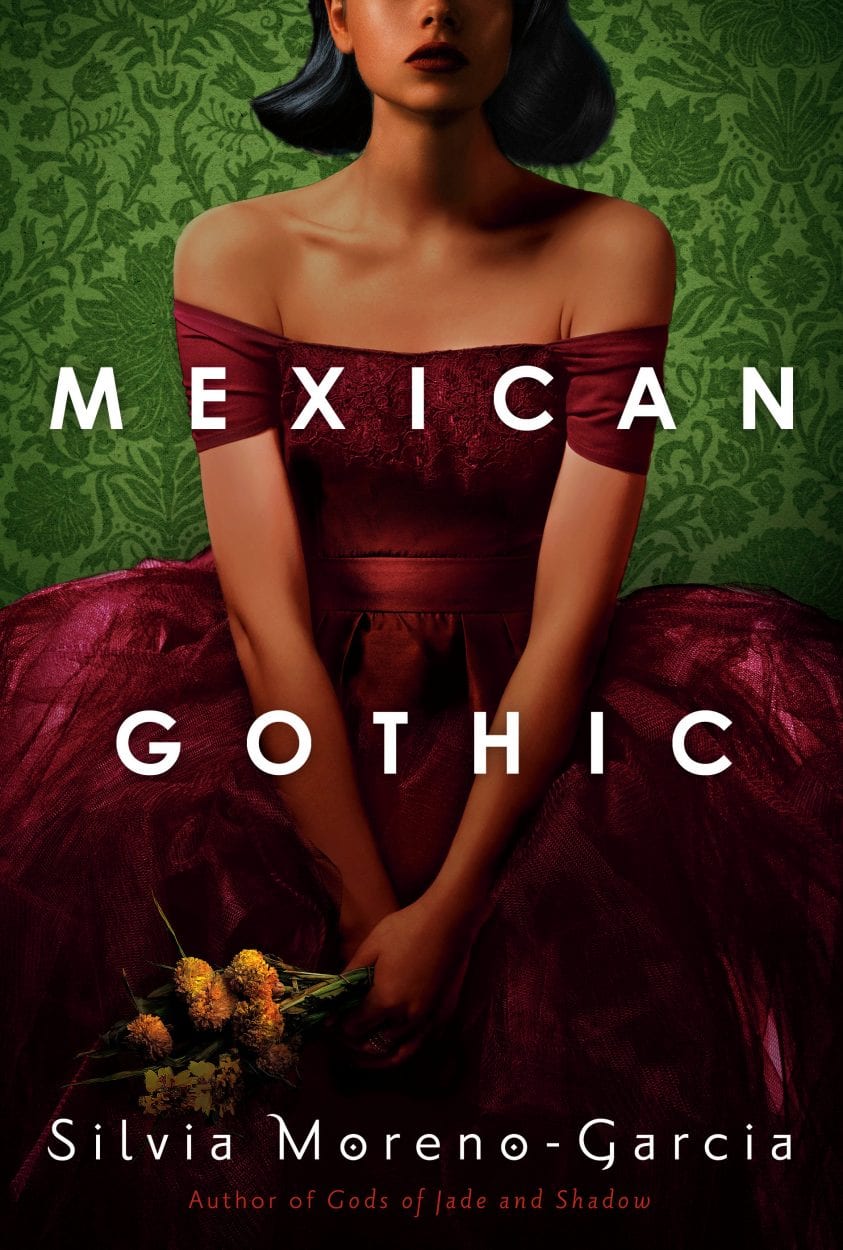 Devolution concentrates its energies on a zeitgeist vibe that pulls together insights into disparate bleeding-edge trends and zones of research. The premise that a Silicon Valley wunderkind has designed and built a hyper-wired eco-living community on previously public wild land he bought from Washington State critiques the delusions of bright green techno-capitalism and its proponents as well as the privatization of the commons. Brooks adeptly uses cryptozoology to reframe, and at times revise, conventional understandings of evolutionary biology and the deep histories of migration. Akin to Mexican Gothic, there are intense sequences of horror, ranging from the eerie to the gory, that provoke critical thinking about the crises we’re facing now and into the future due to actions of the past.

Bouncing back to Mexican Gothic, the novel opens with Noemí’s father directing her to travel to visit her cousin Catalina in the remote mansion, called High Place, where she lives with several generations of her in-laws. Noemí draws us into the characters, the plot, and one of the greatest haunted houses in literature by reflecting on Catalina’s love of English gothic novels with their moody landscapes and romanticized women in peril. But when Noemí arrives, after a train journey and a harrowing car ride up the mountain, she discovers that Catalina’s fantasy is steeped more in the more horrifying elements of the gothic: suggestions of cannibalism, incest, murder, and occult botany. The novel is filled with disturbing dreams and hallucinations, chilling suspense, and brutally beautiful splatter as Noemí must solve the mystery of what is happening in this house and then try to save Catalina and herself.

The horror and violence of Mexican Gothic feel attuned to Moreno-Garcia’s connection of the genre with the history. The family Catalina married into is from Europe. They built a fortune in Mexico before the Revolution by owning and operating a lucrative silver mine. Not only did this family draw wealth from the veins of the land, to borrow a metaphor from Eduardo Galeano, but they ruthlessly exploited local laborers, sending them into the dangers of the mine and circulating the lie that masses of them died from an epidemic. The only epidemic was the supernatural avarice of these colonial speculators, but I need to leave this a bit vague here.

The occult botany comes into play through fungi. The molds and mushrooms in this novel achieve a brilliant level of uncanniness on par with the fruiting bodies that spell words on the tower/tunnel’s walls in Jeff VanderMeer’s novel, Annihilation. But Moren-Garcia’s mycology is anything but derivative. The plotline of the fungi is carefully crafted to build and swerve and scare the pants off of readers and the inhabitants of High Place alike.

Somewhat like those fungi, the sasquatches of Devolution provide a narrative arc as well as acute events of pure terror that spark philosophical questions and hypotheses when the protagonist reflects on them when the immediate threat has passed. The subtitle of the novel, A Firsthand Account of the Rainier Sasquatch Massacre, refers to Kate (Katie to some) Holland. Her therapist instructed Kate to write daily accounts and reflections, and it is through her writings collected in a journal that was later discovered in the remains of Greenloop that readers get access to life in this eco-living community and their war with the sasquatches when all living beings in the area confronted chaos when Mt. Rainier erupted.

Part of the novel’s charm is its fragmentary style. Chapters are short since they are supposed to be journal entries, plus the curator of Kate’s journal includes excerpts from interviews with Kate’s brother, who passed along his place in Greenloop to her, and Senior Ranger Josephine Schell, an expert who works in the area and witnessed the Greenloop remains. This range of voices, which is multiplied by the various voices Kate records in her journals, brings different perceptions and interpretations to bear on what unfolded at Greenloop.

Something to love about Devolution is the way it bundles sophisticated questions about ecological ethics and aesthetics with the magnetism of bigfoot. It’s like the novel’s core page-turning, sorta-schlocky qualities are both content and form that engross you while prompting you at the same time to contemplate what ideas and instincts drive the enjoyment in devouring the story. You’ll never think about Beringia, the Bering land bridge, and what it might mean for homo sapiens and ecosystems the same way again.

Something to love about Mexican Gothic is the myriad interconnected layers of haunting. From the ghosts of families, nations, and globalization to architecture, extractivist mining, and dream logics, Moreno-Garcia designs this story like a lenticular portrait. Depths within depths, representations within representations. And some serious geeking out on the chemistry of Victorian wallpaper.

Each novel makes a stellar summer read, though I’m going to recommend getting your hands on both and reading sections of each in alternating bursts. I did so by a happy little accident; now I dispatch the ghost of that experience to stalk your bookshelves and any hopes of sleeping until both tales are told.