Michelle Weaver is a woman who’s worked her entire life to get where she is in the world. Now, as this new chapter begins, it’s the world itself that’s about to change. She’s about to take a break from life as she knows it and book an extended stay here… in the Twilight Zone.

Though Jordan Peele has become known as a master of horror in the last few years, writing and directing the landmark Get Out as well as one of the best films of 2019, Us, both his critically and commercially successful films have had elements of science-fiction in them. And not green-alien, laser-ray sci-fi either, but high concept fare involving a perversion of science. Despite being an executive producer and star of his reboot of The Twilight Zone, we’ve yet to see his horror/sci-fi hybrid ways evolve into a screenplay for the show. But finally, with the episode “Downtime”, Peele has delivered his first script and, true to form, sticks to his genre roots by providing us a half-hour of 100% weird science.

It wasn’t that Peele’s presence was not felt in the show’s DNA during its first season or in the second season opener “Meet in the Middle”. Episodes focusing on race relations, the concept of the other, difficult political topics, and social commentary, all relevant to Peele’s history as a writer and director, were there. But with only one story credit (for “Nightmare at 30,000 Feet”) it did feel like we were getting the Jordan Peele suggestion, not the full take. But “Downtime” (his only writing credit of the season it, should be noted) is our chance to see Peele’s take in action: his thesis on what Jordan Peele’s The Twilight Zone should be. And critics appear to be approving. 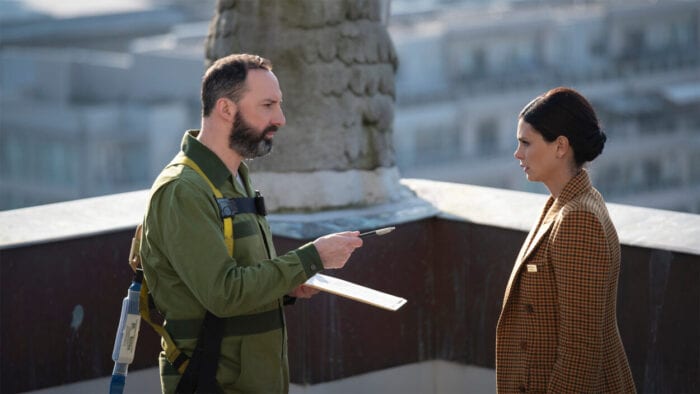 “Downtime” focuses on Michelle Weaver (Morena Baccarin), an industrious hotelier who wishes for and ultimately gets her much-deserved promotion to Manager. Michelle is supremely dedicated to her job and knows how to handle any customer service situation with calm and class. Her employees love her and the hotel runs smoothly with her in charge.

One day on her break she hears a tremendous roar in the air and goes outside to notice everyone staring in a stupor at a gigantic eye-like contraption in the sky. Seemingly the only one unaffected, Michelle runs home to ask her husband what is going on but is intercepted by a couple of kids on skateboards identifying themselves as “customer service”. It appears Michelle is really an avatar in a worldwide digital sleep/dream program called Downtime and her user has suffered a heart attack whilst engaged in the program, causing Downtime to go into worldwide maintenance.

Not believing she is merely a figment of the imagination, Michelle escapes the “customer service” reps and tries to find out the answers to her existence, evading avatars of her user’s wife, advanced agents of customer service, and the always-watchful eye of Downtime. 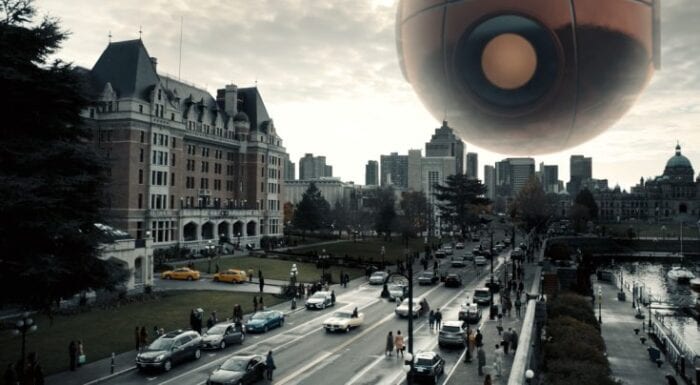 More in the vein of Us then Get Out, “Downtime” takes us down a rabbit hole of “what if” sci-fi scenarios involving man’s relationship with technology that you would normally find on a cerebral episode of Star Trek or, and I suppose this is the point, the original Twilight Zone. It is one thing to bring to life an environment and characters within it but it is entirely a different thing to bring definition and meaning to said characters in that environment; to give them dimension and, in some cases, self-awareness. Like the best short stories in Ray Bradbury’s The Illustrated Man, some fictional characters don’t simply exist. They strive to find out why they exist. And “Downtime” flows with that same energy.

The great “what if” of the episode is “what if you found out your life wasn’t real, but you could go on living it anyway”. That leads to the follow up: “is life worth living?” The joys and passions were never real and neither were the struggles and accomplishments, yet something may still persist: pride? Stubbornness? The Narrator (Peele) suggests that Michelle has made her choice:

“How would you feel if you spent your life making your dreams a reality only to find out that reality itself was a dream all along? We can never know what makes something real, but today Michelle Weaver has found meaning in an otherwise synthetic world. And that’s good enough for her…here in the Twilight Zone.”

And what could be more inspirational than that? For life itself is often a complicated beast with plenty of mystery and, at times, inanity. Why go on? Many have asked that and many have decided not to find out. But many of us “stay in character”, as Michelle does at the end of the episode, allowing her own beliefs to be enough for her to continue moving forward even when she knows it is all for naught.

If this wasn’t enough for 32 minutes of screentime, Peele also manages to pack in themes of “service”, focusing on Michelle’s level of expertise handling difficult customers but also showing different levels of customer service in the Downtime program. As Michelle becomes more independent and “difficult” for Downtime, the program is forced to send bigger guns to handle the problem, much like a hotel clerk might have to call a manager.

In the case of the episode’s climax, Tom (Tony Hale), a more advanced customer service rep, explains to Michelle the rules for her existence: we won’t erase you but you have to play by the rules and “stay in character”. Just like Michelle handles a particularly difficult couple looking for better accommodation in the hotel earlier in the episode, Michelle eventually decides to compromise and accept a situation that works for her while saving face for Downtime.

Though not as solid of an episode as the season premiere “Meet in the Middle”, Peele’s first writing contribution to The Twilight Zone is a welcome one. And unlike “Meet in the Middle”, where once you know the twist the episode is “spoiled” on future watches, “Downtime” has the potential for multiple rewatches as there are little clues and hints packed throughout that only help to expand the universe Peele has created. Just like with Get Out and Us, Peele’s multi-layered screenplays make for compelling viewing and we can only hope that we get more of his work in Season 3.