What is an airport?

At its worst, it is an invasive, overwhelming space that seems specifically designed to function as the first and last hurdle between places that will always be better. In the busier international airports of the world, security checks are intense and dehumanizing, gates are impossibly far away and are superseded by labyrinthine hallways and tunnels, and there is an endless buzz of voices in the air. These are not comfortable places to endure—at least, not for more than a few hours. They are, by design, transitory spaces, moving us from one place to another.

The idea of an airport, divorced from those that work there and those that pass through, is far more interesting to consider. Here is a place that encourages deep contemplation with its emptiness, inviting dreamers to stare out of its enormous windows, and travelers to bask in its endless supply of natural light. All the airports I’ve ever been to, both tiny and formidable, have always shared these large, open spaces that are designed to showcase the runways and airfields from almost every angle. Airports such as Heathrow and Zurich feel like some of the most colossal spaces I’ve ever visited, and this isn’t just because of their size.

Other man-made structures are built around a single focal point or function, and this makes them understandable and manageable despite being taller or wider. International airports, however, are built around nature—vast, open fields marred by winding runways and impeccably regulated systems of planes in motion. Their open windows and spacious metal caverns sit at the cusp of a boundless sky, and are built around its promise. 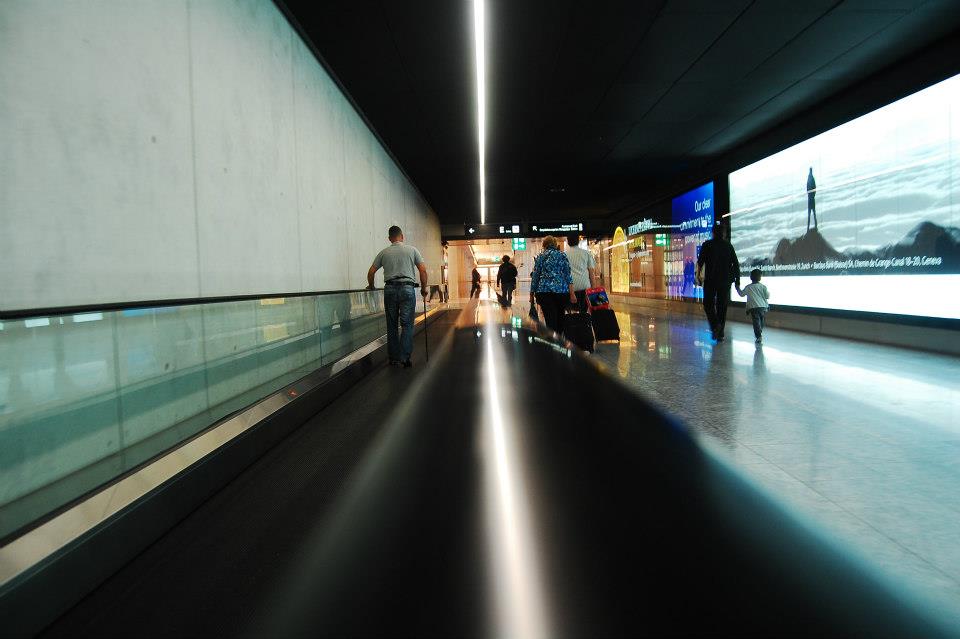 In the liner notes of Ambient 1: Music for Airports, Brian Eno distinguishes his “environmental music” from the Musak of the 1950s that sought to “blanket” the “acoustic and atmospheric idiosyncracies” of their environments “in a lightweight and derivative manner”. He refers to this new music, which seeks to enhance the qualities of a given environment and induce a sense of calm and a place to think, “ambient music”. The rest, as they say, is history. Eno pioneered ambient music, and single-handedly popularized and consolidated a genre that would encompass a diverse array of sounds and influences that, ultimately, all centre around the same philosophy: colouring the world we live in. Imbuing the spaces we visit every day and take for granted with a “tint”.

Ambient 1: Music for Airports does more than just provide a “tint” to this kind of space, however: it recontextualizes it entirely, favouring this idea of an airport more than the experience of one. I have never listened to this album in an airport. Yet I can relate so strongly to this idea of a transient, peaceful space, where bodies without weight exist only in transit and never with noise, passing in blurs beneath wide-open skies and planes drifting upwards. It mimics the ebb and flow of my conscious state and refines it, drowning out the fluff and syncing my thoughts to the loop of a piano or a wordless vocal, phasing in and out of silence. It also perfectly aligns with the idea of another place: the town where I first found it, and have been living since.

When I moved to Brighton, I did so on little more than a whim, and without a future in mind for myself. I moved here simply because I wanted to. I knew very well that I would not be here forever, or even for that long at all—and that’s precisely what made it so special, for me. Living intermittently in various parts of London my whole life, I feared that I would never make it out of the city, as I was certain (and still am) that the kind of career I want for myself can only exist there.

But Brighton was calling, and with it, the works of Brian Eno, and the allure of ambient music. I had previously attempted to listen to Music for Airports a few times in London, as well as other classic ambient works, to no avail. When I sat down with the record in the middle of winter, however, something clicked. “1/1”, in particular, spoke to me. I found something immensely reassuring in its reliable repetitions, and something new, every time, in its tiny variations. I couldn’t stop listening to it—I took the music with me to the sea, on freezing cold days; I took it to go get coffee with me. Here was an album that drastically altered my concept of space. If I played it with my headphones on, it expanded inside my head until I felt bigger on the inside—open, clean, and shiny, like an newly minted aerodrome without a soul to block the sunlight.

If I played it over speakers, it knocked the corners off ceilings. By the sea, it synchronised with the tide, and hearing people talk through it only seemed to make it more natural to listen to. No matter the environment, the pace of “1/1” and, by extension, the entirety of the record, seemed to match perfectly with the steps I needed to take on any given day.

I can only conclude that it was Brighton itself that allowed this album to breathe with me. My decision to move here was a call of nature. I craved the feel of a city built around a sprawling sea
that pulls in all directions and touches every corner of the town beneath it. Every alleyway, main road and square is suffused with its salt, and gestures towards its panorama. Even further inland, sitting outside my flat, I can hear the seagulls, feel a breeze that carries its promise. The pace of life here is slower because of it. Every person I meet is heading towards it, down the main roads that wind and back in on themselves and then, ultimately, stop dead at the pier. The sea makes Brighton feel endless: a town built around a natural phenomenon, and all the more phenomenal for it. This is simply my idea of the town, supplemented by the melodies, washes, and drifts of an album that sounds like the sea. Brighton, in so many ways, is my very own airport. I might be going somewhere better, eventually, but I will always remember what it was like to dream here. 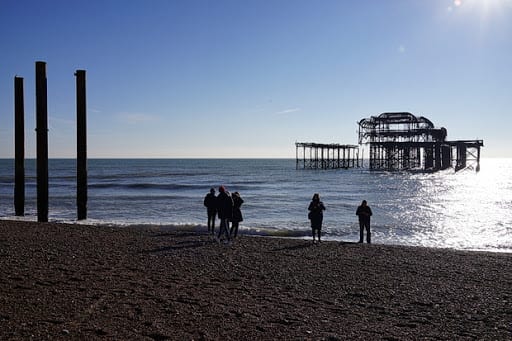