Menu
Search
Menu
Search
"The Who Of You" -- Pictured: Ethan Embry as Harry of the CBS All Access series THE TWILIGHT ZONE. Photo Cr: Dean Buscher/CBS 2020 CBS Interactive, Inc. All Rights Reserved.

After an impressive opening salvo of “Meet in the Middle” and “Downtime”, The Twilight Zone hits the first snag of its second season with the action-packed, but intellectually light, “The Who of You”. Written by Win Rosenfeld (writer of the upcoming Candyman reboot and executive producer for BlacKkKlansman), “The Who of You” borrows heavily from other source material, most notably (and perhaps subconsciously) the Denzel Washington vehicle Fallen, and does little with it outside of surface-level tension.

Which is a shame, because the first two episodes of the season had intellectual depth and an extra dimension to their storytelling that begged the viewer to look deeper into the subject matter. “The Who of You” offers thrills, sure, but is immediately forgotten once it’s over. It’s never boring and, in fact, rides on a satisfying sequence of thrills, thanks to swift directing by Jordan Peele acolyte Peter Atencio (Key & Peele, Keanu), but never rises above its station as a high concept sci-fi actioner. While there is nothing wrong with a more kinetic approach to storytelling, this is The Twilight Zone, and we expect more than just a cute gimmick and flashy visuals. There has to be meat to the story; enough for the audience to chew on before, during, and after a viewing.

Harry Pine (Ethan Embry) is a struggling actor, emphasis on the word struggling. His auditions are soul-sucking experiences with little reward. His girlfriend at home, Morena (Carmel Armit) is having quite the opposite experience, as her burgeoning star slowly rises in the acting community. Unable to pay his bills, and suspecting Morena of indiscretions, Pine decides to take excessive action: he’s going to rob a bank. “I’m a good actor”, he thinks, thus he enters his local bank with a small bag and a toy gun.

But unexpectedly, as he converses with the bank teller, he makes direct eye contact with her and suddenly passes out. Pine awakes inside the body of the bank teller, confused and with a sack full of money while his former body is placed under arrest. Pine, now inside the body of the bank teller, makes direct eye contact again, this time with a police officer and switches bodies again. Realizing his new special power allows him to transfer bodies whenever eye contact is made, Pine flees across the city, transferring bodies at will, desperately trying to get his money home to Morena to show he is a man of action and success.

There is one hitch. While Pine masquerades as other people, the identities of those whose bodies he stole goes into the empty vessel Pine used to inhabit, making investigating cops, like detective Frank Reece (Daniel Sunjata), think they are dealing with a down-on-his-luck actor trying his best to get an insanity plea. But as Reece soon discovers, the chase for the stolen money will lead down some unexpected paths…in the Twilight Zone. 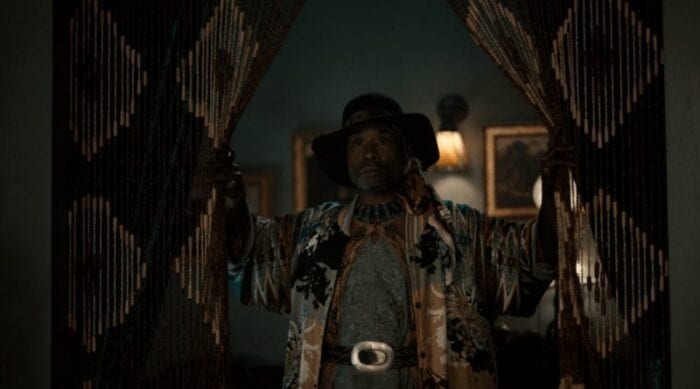 “The Who of You” feels like a writer’s first script: full of fun ideas but lacking cohesion. And Rosenfeld’s credits, according to IMDB, show this as, indeed, his first screenwriting piece. While the story makes sense and has an internal logic that is followed rather well, the episode feels like a first draft rushed into production. We’re never sure how we are supposed to feel about Harry Pine, and when he encounters obstacles, they never have any Twilight Zone punch to them. Is Rosenfeld saying something about the police? About acting? About selling your soul for a part? It is never clear. It’s like the screenplay needed another pass to provide that narrative bite.

On the technical side, the production is, of course, flawless if not entirely too polished. Cinematographer Mathias Herndl plays with light beautifully in the episode, alternating between dark interrogation rooms with moody lighting to spooky, earthy psychic offices. And long-time acting veteran Ethan Embry does a wonderful job inhabiting multiple personalities, as do the various character actors hired to portray a confused and manic Pine. Golden Globe nominee (and Tony Award winner) Billy Porter makes an appearance as well but seems wasted in the little screentime he gets.

Daniel Sunjata, playing Reece, looks rugged and handsome but falls a bit flat. He feels too much like an actor playing a cop. The same goes for Pine’s girlfriend Morena (Carmel Amit), who comes across artificial as the concerned love interest. Because these two don’t strike a chord with the audience, the big reveal that Reece was Morena’s secret lover all along falls entirely flat. We don’t feel betrayed and we don’t feel surprised. This lover’s triangle, with Pine now inhabiting Reece’s body at the time we, and he himself discovers the betrayal, comes across as, well, meh. We care for none of the parties involved.

“The Who of You” is probably the worst episode of the show’s revival (tied with, in my book, the convoluted “Point of Origin”) which seems damning but might be a compliment to the show’s overall effect. If a well-produced 45 minutes of entertaining, but light, fare is considered “bad” then The Twilight Zone is in a good place on the whole. We expect better from the show but can’t fault it the fact that it looks the part.