Kaneto Shindo’s Onibaba is, for all intents and purposes, a tale of the post-apocalypse. We know that it is set near the end of a war in the 14th century, and we know, of course, that the world is not eviscerated here—there’s a lot worse to come in the leadup to the present. However, it is tempting to suspend this knowledge when it comes to Onibaba. There is something timeless about its presentation of a single corner of the world, almost entirely cut off from historical context or reference points, punctuated only by billowing grass, a body of water, and two ramshackle homes separated by a field with a pit in the middle. It is a timelessness that does not exclude the past, present, or future, but rather encompasses them all together at once—a timefulness of sorts.

Made during the Japanese New Wave of cinema in the 1960s, Onibaba feels distinctively fable-like in the simplicity of its story, modern in its contemporary stylings and progressive depictions of female agency, and even futuristic in its imagination of this ultraviolent, elemental wasteland. Shindo is clearly interested in what remains of the old order and what might emerge from the ashes of its passing. Through three primary characters—a mother (Nobuko Otowa), her stepdaughter (Jitsuko Yoshimura), and their neighbour (Kei Sato) returning from the war—the systems of feudal Japan are embodied, challenged, critiqued, and ultimately reshaped to fit an amoral, sensory landscape.

Onibaba is a tale of two women doing all that they can to survive the end of the war, waiting for the mother’s son and the daughter’s husband to come home. They kill samurai and sell their armour for millet; they engage in the same daily rituals of survival, unbothered by the world around them. One day, their neighbour Hachi returns, bringing the news of their son’s death. It doesn’t take long for him to begin seducing the daughter, and the two engage in nightly sexual encounters without the mother’s consent. Unbeknownst to them, the mother becomes aware of their union and must go to extreme lengths to stop it, seemingly out of loyalty to her son, but ultimately out of fears for her own loneliness and her the desire to be seen. 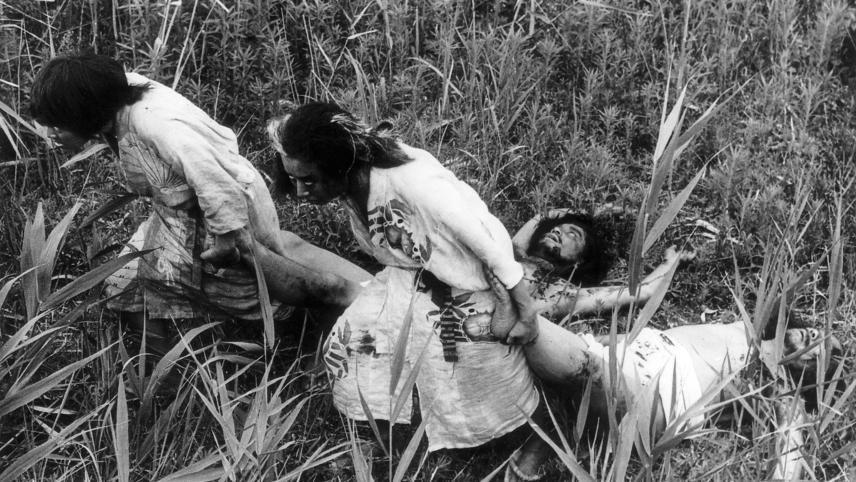 The first thing we see in Onibaba is the pit, hidden in the grass: the pit that has “always been there”, introduced by the only segment of text that we see in the film. We then see the grass and become aware of its two essential properties: its height and its silence, save for the rustle of the breeze passing through. When the samurai attempt to navigate this landscape, they are noisy and blind, dwarfed by nature, and, after being silently slain by the mother and stepdaughter, are dumped unceremoniously into the pit. Here, already, we can surmise the way the environment plays into the cycle of life at its most primal and barbaric. That which is natural and unchecked is stripped of its purity and becomes instead a feature of concealment, alluding specifically to the concealment of malicious intent. The grass hides death, but it also hides unspeakable truths. The pit swallows their murders, and with them the weight of any kind of moral conscience.

When Hachi returns from the war and starts sleeping with her stepdaughter, the mother crouches in the grass and watches them have sex in his hut. She then retreats into the reeds, eventually running into a clearing with a single tree in the centre, and begins to rub herself against its trunk in the throes of unchecked desire, moaning and wailing as she does so. This is the only space in the film that is occupied solely by her, and it is barren and stark. It reveals to us more clearly than anything else the pain of her plight and the true motivation behind her fervent disapproval of the couple’s nightly courting: jealousy. The next day, she looks to the river’s edge from the shadows of the grass. We have seen this space utilised repeatedly as a cornerstone of their daily rituals, retrieving water and bringing it back to the hut. Now, the daughter is nowhere to be seen. The features of the landscape the two women have come to know have transformed with one of them absent. The empty bucket on the shore becomes a sign of the loneliness the mother will succumb to in losing her partner to the desires of the flesh that she herself experiences but cannot satisfy.

This problem of sex in Onibaba becomes prevalent only when men appear on the screen, stripping the women of their agency as a unit. Gender only becomes gendered in the gaze of the “other”—and Hachi isn’t the only male to enforce this problem of difference. The man who they sell their wares to, Ushi (Taiji Tonoyama), commands the transactions in the few scenes they share, standing over their bowed bodies and giving them less than Hachi, who brings him exactly the same items in a later scene. In his cave, a woman lies naked on the floor with her back exposed to the camera; Ushi steps over her and squeezes her almost absentmindedly. Notable also is her positioning. She is at the very back of the cave, occupying a less dominant space than the other male figure in this exchange—who we assume to be mentally handicapped by his unchanging expression, gait, and lowered position within the frame. In his swaying and his facing the camera, he is at least shown as a human being, while the nameless woman in this scene is treated as little more than an object to be used by Ushi and ogled by Hachi.

When compared to the mother and her stepdaughter, this problem of sex for women becomes clear. They can either succumb to the male gaze, uninhibited and unchecked by any social etiquette that might have existed before, or deny it entirely, living a barbaric, genderless existence that swaps the desires of the flesh for its autonomy. This is how we come to know these women at the beginning of the film. After murdering the lost samurai, they walk back to their home and consume a large amount of food in a way that is both methodical and barbaric to watch. It’s rational yet distinctly animalistic, and the war drums that announce their presence in the score assert this strength, as well as the power they hold over this corner of the world—that is, until desire rears its head.

Desire unhinges the warped equilibrium that this brutal couple has come to know, complicating the agency of the younger and the older in complex ways. Anchored as we are to the mother’s perspective, the desire that the daughter and Hachi have for one another initially seems wrong, but this notion of wrongness falters when we step outside the film and realise that notions of right and wrong in Onibaba are ultimately meaningless—this is clearly a world without principles. In doing this, it can be surmised that the act of sex in the film is not contrapuntal to their experience of living but merely a part and extension of it. It is as natural as beating clothes by the river or tearing into a fish by the fire. In the end, it is the desire to be seen that sends the mother to such despair, the feeling of needing to be wanted. Prior to Hachi’s arrival, the breasts and chest of the mother are only visible in her loose garments when she is at work or asleep: engaged, as it were, in the labour of living, and entirely unsexualised. After witnessing her stepdaughter with him, however, she opens her tunic and parades around Hachi with her breasts exposed, feeling herself and attempting to be seen by him. The autonomy of her sexless existence has been compromised, and Shindo takes subtle measures to portray her as both a sympathetic figure and a problematic one. The power she wields in the earlier scenes diminishes with each encounter between Hachi and her daughter until she eventually decides to forsake her own identity for the guise of a demon, as noted by Brian Eggert in Deep Focus Review. By the end of the film, she is both demon and human and neither all at once, losing agency and identity in the face of her unmarked desire to exist in the eyes of another. 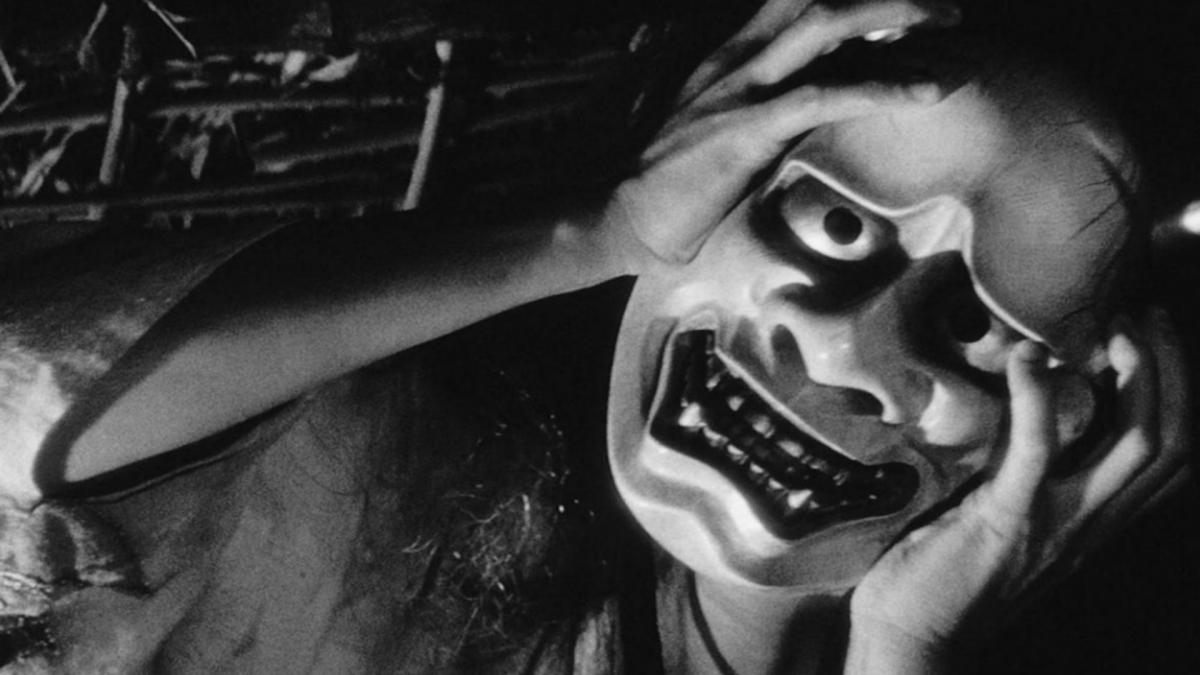 For the stepdaughter, however, sex is an empowering and progressive addition to her way of living. Seen as she is for her body and potential, it might seem as though she surrenders her autonomy to the whims of desire in much the same way as her stepmother. Look a little closer, however, and small changes in her temperament and behaviour start to appear. She begins to talk much more, considering her future and eventually overthrowing the matriarch to establish dominance over their household. In one small but pertinent shot before her final sexual encounter with Hachi, she catches her reflection in a bucket of water. This is the only moment in the film where we see her acknowledge and admire herself. The bucket, which was seen earlier to be a symbol of the mother’s lonely future, is reappropriated via the perspective of her adopted daughter to serve a very different function: rendering her visible not to the mother, not to Hachi, but to herself. The problem of sex, then, becomes more of a problem of perspective—who is seeing who, and how they are being seen.

Herein lies the tragedy of Onibaba. We are presented with an amoral, depraved world where acts of extreme violence are the only source of profit, where men have no allegiance to their country or to the war, and demons of folklore are misappropriated, disrespected, and ultimately disregarded in favour of the sensual pleasures of this stripped-bare landscape. Yet for all this baseless chaos, the story is one as old as time. It is a tale of sex, and the way it frames the female experience. We see this story told differently in so many films and so many different guises, but rarely centering on the matriarch—and almost never concerning her own sexuality and agency in the face of her daughters or sons discovering their own.

What remains of the old order in Onibaba, then, is that which is gendered and eternally recurring. Principles of morality and ethics are easier to overcome than the inexplicable positioning of men and women in society, and the all-encompassing timefulness of Shindo’s film speaks to a present and future which echoes this. Although we can see that the stepdaughter is able to own her own narrative as a direct result of her sexual awakening, it is not her that we primarily align with through Shindo’s lens. It is, of course, the mother. Through her, we see a future for the stepdaughter that is very much the same—a future of not being seen. Attempts to change this, to thwart the imprisonment of the male gaze and bridge the generational divide that leaves women alone in their dying years, are unviable, then, now, and maybe forever. It’s a powerful and sobering message, one that still rings true for many.