Kyle MacLachlan fans know very well that not every film he’s in is exactly…great (*cough* The Librarian: the Quest for the Spear), but we love him anyways. Tesla is one such film. Now, you say, how can a film with such talent as Ethan Hawke be so terrible? I’m not sure I have a definitive answer to that, but allow me to explain.

When Kyle MacLachlan had tweeted about the virtual screening and Q&A for Tesla, sponsored by the Tesla Science Center in Long Island, NY, I jumped at the chance to see it. I knew going in that the film was probably not going to be very good going solely based off Kyle’s track record (minus the films he’s made with David Lynch obviously), but I love bad movies and I will watch anything starring Kyle. However, I was not prepared for just how bizarre this movie was.

The film chronicles the life of Nikola Tesla (Ethan Hawke) during his prime, when, himself, Thomas Edison (Kyle MacLachlan), and George Westinghouse (Jim Gaffigan) first harness electricity and light, and the ensuing rivalry between Tesla and Edison. J.P. Morgan’s (Donnie Keshawarz) daughter, Anne Morgan (Eve Hewson), tells the story via narration and using modern projection equipment and a laptop to display her research on Tesla. This is not the only insertion of modern technology: during one scene, Edison whips out a smartphone. We see Tesla court Anne Morgan, invent his famous coil, flirt with actress Sarah Bernhardt (Rebecca Dayan), and terrifyingly test a Faraday cage. There are endearing scenes of an ice cream fight between Tesla and Edison, Tesla attempting to rollerblade, and a pie scene that feels like a Twin Peaks reference (there’s also a scene where Kyle asks “Gotta light?”).

While this may seem like a normal biopic, I can assure you it is not.

What if I told you that the film ended with Ethan Hawke doing karaoke? Yes, I’m serious. It is the film’s only saving grace. In the scene, Tesla, clutching a modern microphone and lit in neon lighting, sings the Tears for Fears song “Everybody Wants to Rule the World”. This scene exists isolated from the film—there is no further explanation.

When asked during the Q&A portion of the evening, the director Michael Almereyda (Hamlet) tried to avoid the question, saying that the film was rushed and they needed something to fill the space, then quickly moving on to another topic. It is possible that the song could refer to how Tesla felt about being overshadowed by Edison. In a way, the lyrics describe how he wanted to “rule the world” but through fate and bad luck with businessmen, he never got the chance to.

In the moment, it was a scene that had me in disbelief. When the music began and we panned down to Tesla with his microphone, I found myself screaming to a friend, “He’s not going to sing it…is he going to sing it? He’s singing it.” The scene was just as satisfying for a bad movie lover like me as you can imagine. It made little to no sense to the plot of the film, nor visually. It was a complete non sequitur. It was phenomenal. It gave me the same feeling I got when James performed at the Bang Bang Bar. I couldn’t believe it was happening, but I was so glad it was. 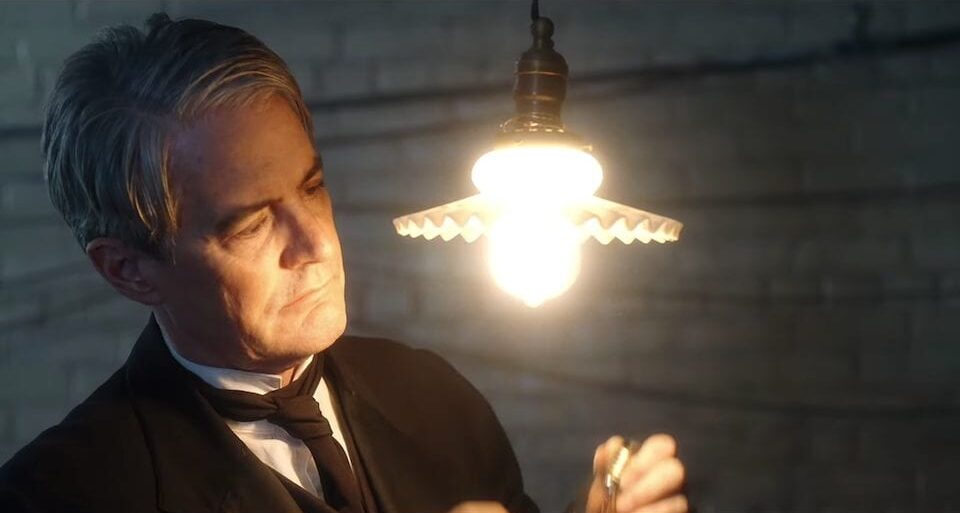 That bizarre scene aside, the rest of the film was a bit of a mess. It was oddly edited, jumping around from scene to scene, often forgetting to finish the previous scene. At one point, Edison is testing out new technology for an electric chair, on a dog nonetheless. We quickly cut to something unrelated that Tesla is doing. Then we move onto the first human use of the electric chair, completely forgetting about the dog. In another scene, Anne remarks that electric current made her feel her dead cousin, and she is completely ignored. The whole film feels as rushed as the director was making it, which is odd considering he apparently got his agent back in the ‘80s by submitting a spec script on Nikola Tesla.

Interspersed throughout the film are scenes of Anne Morgan in a modern film studio giving narration. These scenes are randomly placed and don’t really tell us more than we’ve already seen in the narrative scenes. It is unclear the meaning of the use of modern technology during these scenes. They come off as a bad college history lecture and are distracting to the plot. Despite the narration, the setting of the film changes so frequently that it feels impossible to keep up. It’s almost as if the narration serves no purpose whatsoever. At the end, the narrator posits the question: what if we live in a dream that Tesla created? This is the only mildly interesting thing the narrator says in the entire film.

In place of an actual set, a projected or printed image is displayed on a screen behind the actor during several scenes. The only physical set pieces are whatever furniture the actor was interacting with. You could’ve chalked this up to an artistic choice if it had been consistent, but it occurred during maybe three scenes at most. Ultimately it was, like the narration, distracting.

On top of all that, the film does such a poor job of introducing the characters, that you may not know who a person is until five minutes into a scene. It took Googling Jim Gaffigan to find out that he was playing George Westinghouse, with a magnificent white mustache I might add. I had no idea the man in the office that Tesla was arguing with was J.P. Morgan until he signed a document that read “Morgan” at the end of the scene. 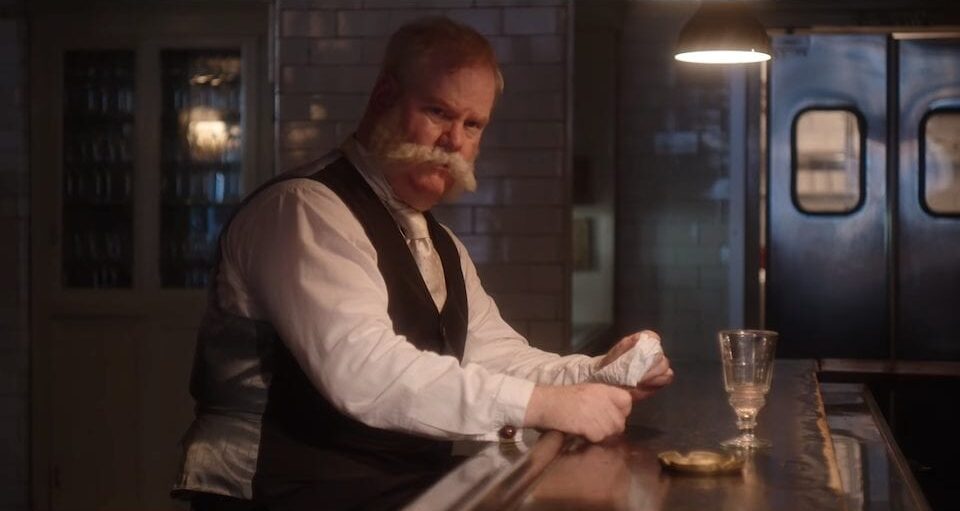 Despite all this, the talented actors did a wonderful job of making such a confusing movie watchable. They did their best with a convoluted script, and for that I am thankful. Ethan Hawke’s Nikola Tesla shone, as do most of his roles. Kyle MacLachlan brought his charismatic charm to the role. Eve Hewson, who by the way had the best-written lines of the script, made us fall in love with her.

Tesla is available in theaters and on VOD August 21. Check out the trailer, and godspeed to anyone brave enough to watch this.