Blow-Up is a movie about wanting to believe in something. It is also a movie that’s about not believing in what you are seeing. These are the themes explored in Michelangelo Antonioni’s first English film.

Antonioni was coming off an acclaimed couple of years, mainly for having directed his famous isolation trilogy: L’avventura (1960), La Notte (1961) and L’eclisse (1962). These movies followed attractive, well-off individuals exploring their lives and desires, not through honest self-reflection or personal betterment—but seemingly aimlessly, out of boredom.

Only L’avventura contains anything in the way of a conventional mystery. In a sense, that makes Blow-Up closer to that film than either of the others in his trilogy. In L’avventura, a woman (Lea Massari) disappears without a trace from an isolated island on a late summer trip with friends. The audience has no idea what happened to her anymore than the characters searching for her do. Eventually, her friends forget her memory and force themselves to continue on.

In Blow-Up, a mystery is also explored, and when the mystery ends in a similarly ambiguous way, its characters are forced to carry on as if nothing has happened. In the case of Blow-Up, nobody is even sure if anything mysterious has occurred at all.

For this movie, Antonioni did not cast his previous muse, Monica Vitti, with her flowing blond hair and almond-shaped eyes. Instead, he cast British actor David Hemmings, whose hair is no less golden and flowing. Hemmings is an actor who has been described as “baby faced,” but when we first see him in Blow-Up he appears scruffy, dirty, and slightly sunken. We see his character, Thomas, emerging from a London flophouse with a group of men who appear rather down-and-out. We assume he’s a poor schlub like the rest of the souls in line.

However, Thomas turns the corner and hops into his Rolls-Royce Silver Cloud III convertible, a spiffy vehicle in which no derelict would be seen driving around London. This is where the audience realizes that what Antonioni (along with his co-screenwriter Tonino Guerra, who would go on to write Fellini’s Amarcord) presents to us in this movie might not be what, at first glance, appears to be the reality of a situation.

Thomas and his car are then mobbed by a group of teenage revelers in white face paint busking for charity in a ritual known as “RAG.” Thomas brushes them off by handing them some change, then drives the streets of mid-’60s mod London to his photography studio. Again, it’s a pretty glamorous profession for someone who just emerged from a flophouse (it turns out Thomas was there to capture some images for an art book he’s preparing).

Inside the unassuming building, Thomas’s hours are spent photographing London’s most striking females for layouts in fashion magazines. In the first photoshoot, we observe the real-life supermodel Veruschka impatiently waiting for him. We then see how he throws himself into creating the right photos. He doesn’t just stand behind the camera 6 feet away from his comely subjects; he and his camera get very up close to them—even to the point of straddling Veruschka as she’s lying on her back on his studio floor. 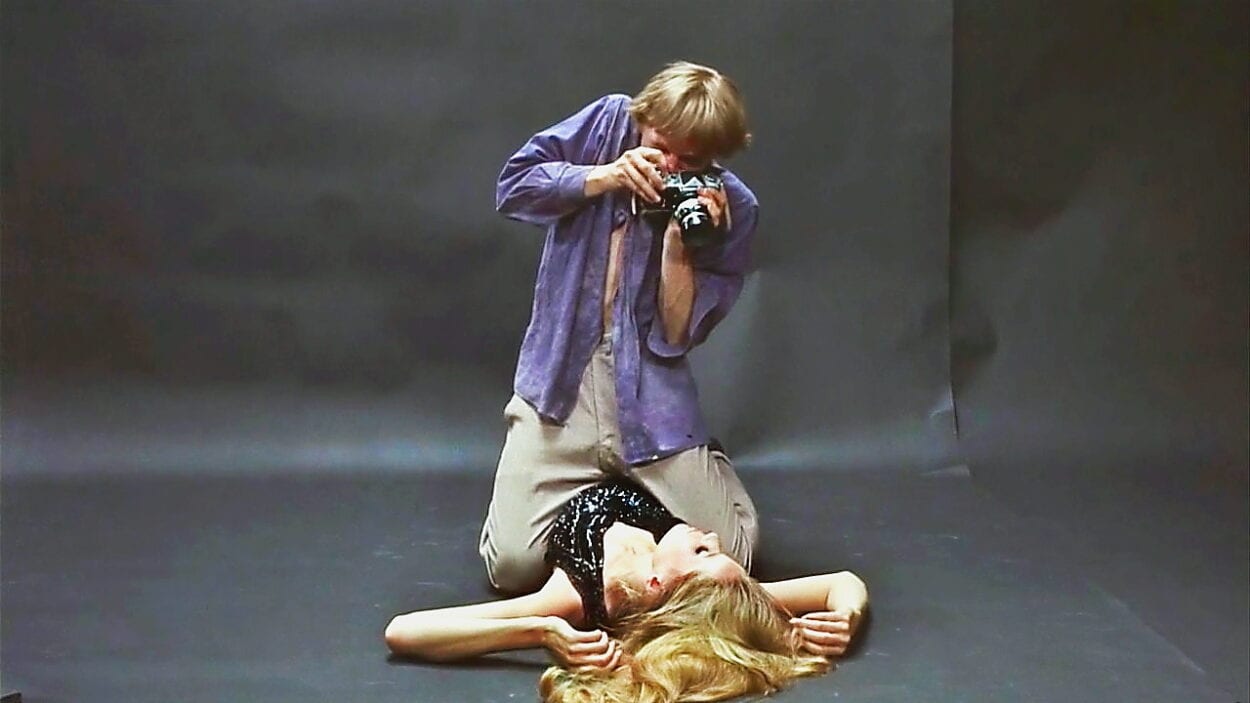 Perhaps another director would show us the action from Thomas’s point of view or his view from the camera, and we would face down on the withering fashion model, but Antonioni doesn’t involve us by placing us in his subject’s frame of mind. His camera is the one that remains at length from the photographer and his model subject. By keeping us from seeing the camera through Thomas’ point of view, Antonioni somehow manages to make the sequence scandalous yet clinical. It’s almost as if we’re watching a surgeon skillfully perform on a patient. Thomas doesn’t crawl over for any sexual thrill—he does it to get that amazing shot.

Thomas apparently has quite a reputation as a fashion photographer, as he is constantly bombarded by young girls begging him to photo them in the hopes that it will lead to national exposure. Two of these girls (Jane Birkin and Gillian Hills) show up to his studio and accost him for photos. He brushes them off by ordering them to come back later.

After a shave and change into some snazzy threads, Thomas heads out to take some photos in the park. While there, he comes across a woman (Vanessa Redgrave) and a man (Ronan O’Casey) whispering in secret and kissing. When he is caught taking a photo of them, the woman chases after him and demands the photos back. Thomas refuses, yet the woman tracks him down to his studio. 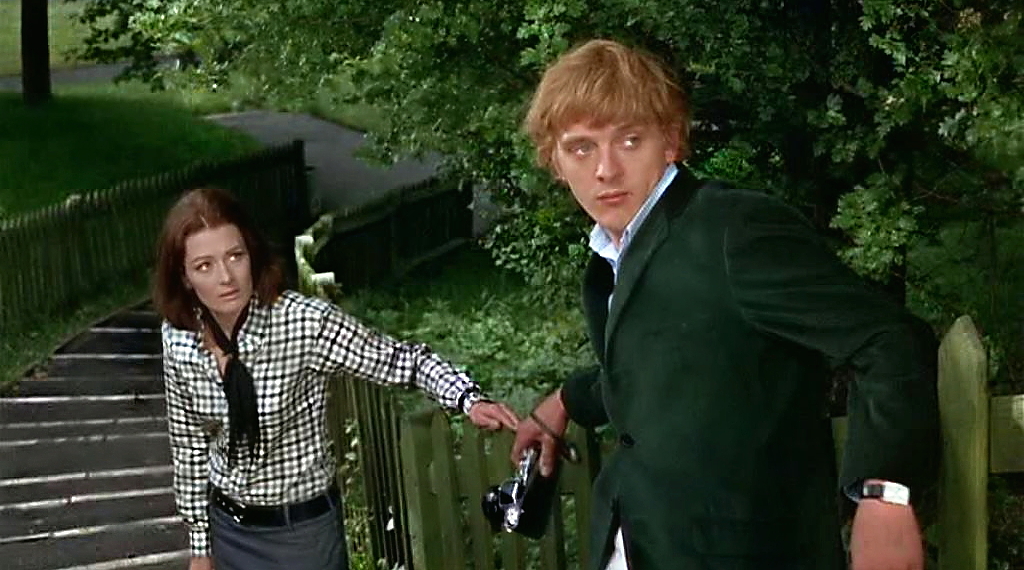 After a brief flirtation, Thomas gives her a fake roll of film, and she gives him a fake phone number. Thomas enlarges and examines the photos of the couple in the park and discovers the woman and man staring off at another man holding a pistol. When he attempts to examine his photos some more, he is interrupted by the two young bikini models from earlier, who again beg him to take their photos.

Thomas enjoys a lengthy romp with his new companions and falls asleep where, when he wakes, decides to take a trip back to the park. There he finds a body, most likely the man with the woman from earlier that day. When he returns to his studio he finds it has been broken into, and most likely not by the two bikini models. We weren’t sure there was a mystery, but now we wonder who might have broken into Thomas’s studio. Was it the woman, or the man with the pistol? Antonioni never tells us.

Thomas drives into town, where he locates the woman in question and follows her Into a nightclub, which, seeing as how it’s Saturday night, is in full rock-and-roll mode. He enters through the club doors, upon which is a sign protesting Bob Dylan’s recent conversion to electric.

Thomas scans the crowd, who are fully enthralled by an onstage performance from The Yardbirds. As typically happens during rock performances where a crowd of young people is collectively stoned, a riot breaks out, forcing him to flee without finding or confronting the woman, whom we (and perhaps Thomas) never see again.

Thomas’s night isn’t over, though. He finds himself at a party, where he encounters Verushka. Not one to tear himself away from a model he’s photographed, he spends the night in the house and awakes in the morning with the London sunlight beating in through the windows.

It has now been 24 hours since Thomas emerged from the derelict house, romped with Verushka, first entered the park, romped with the bikini models, returned to the park, chased after the mystery woman, and romped with Verushka again. Now he’s back in that park, and no traces of the previous day remain. Whatever body might have been there is gone. If someone is playing games with Thomas, it’s a game he’s not aware of, and we assume never will be.

Thomas’s 24-hour mystery ends when he comes upon a group of mimes (they may or may not be the same group from the day before, as these mimes are dead silent) play-acting a tennis game. They lob invisible balls back and forth with invisible rackets until Thomas gets pulled into their imaginary game. He obliges; as we can tell by now, he loves engaging in a fantasy, whether it’s being a hotshot fashion photographer rolling around with beautiful barely dressed models or an investigator attempting to solve a murder.

For a stretch of Blow-Up, Thomas is much like Claudia of L’avventura; they’re both trying to solve a mystery they had no hand in. The mystery just happened upon them, and in the end, both characters do not have any answers. These are mysteries they will just have to accept without ever knowing the answers.

The same could be said of the audience. If one was to go into Blow-Up hoping Antonioni would provide explanations to his mystery, they’d be sorely disappointed. Antonioni provides none, and we are as perplexed as Thomas.

Thomas’s profession, fashion photographer, makes him a participant in creating fantasies. We’ve all seen the fashion magazines on newsstands, where the world’s most beautiful men and women seemingly gaze seductively at us. But that’s the fantasy. In reality, they’re staring seductively into a photographer’s camera, under lights, against a backdrop inside a portrait studio, much the same way a character in a film or TV show will break the “fourth wall” and “talk to the audience.” They too are looking into a camera and speaking to the person behind that. The cameras are just capturing it. 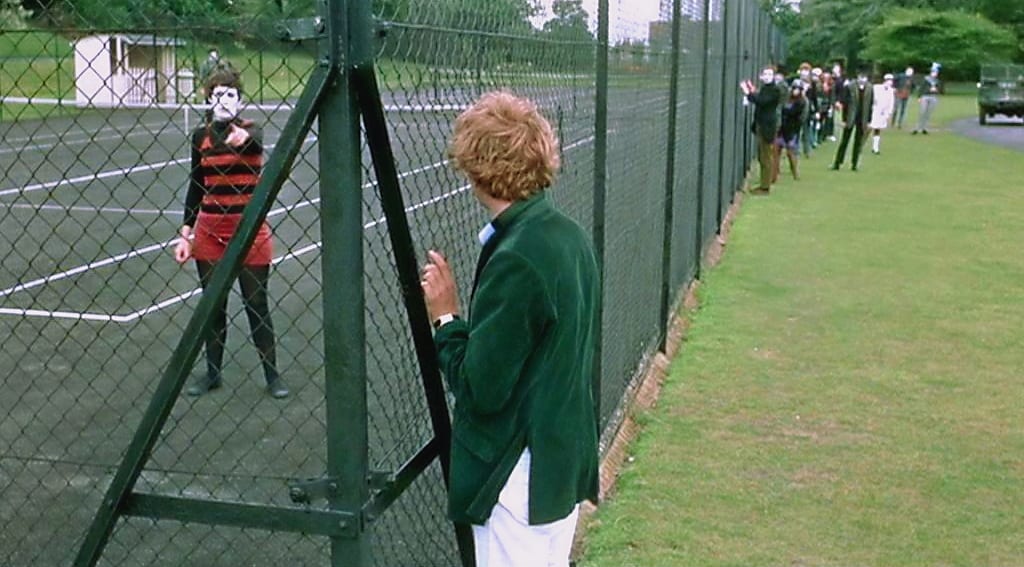 Still, we pretend and go with the fantasy as we convince ourselves—why, yes, Rosie Huntington-Whiteley is staring at us, and yes, that is Leonardo DiCaprio in The Wolf of Wall Street speaking to us, because to believe in the fantasy is way, way more fun than not. That’s why Antonioni made Blow-Up, and that’s why it has been an inspiration for so many filmmakers (Francis Coppola’s The Conversation and Brian De Palma’s Blow Out to name the most obvious two) since this movie’s 1966 release.

Today, conspiracy theories are as popular as they have ever been at any point in our history. They have become a part of our daily mainstream discourse, and one of those theories is that somebody, somewhere right now is plotting against us. Most of the time, these theories are just imagined. You come away from Blow-Up wondering if Thomas imagined his murder. Yet at the same time, you think, but maybe, dying to know the answer.