The Twilight Zone is, shall we say, a bit cynical about fame, especially in its newest incarnation. In season 1’s “The Comedian”, Samir Wassan (Kumail Nanjiani) was a comedian who was granted his wish of popular success but the price was the disappearance of anyone or anything he discussed in his material. So if he had a particularly funny bit about his girlfriend, he’d get the laughs but also come home to find out his girlfriend no longer existed.

In the fourth episode of The Twilight Zone’s second season “Ovation”, producer Jordan Peele and frequent writing contributors Emily Chang and Sara Amini (they provided writing duties on the stellar episode “Meet in the Middle”) look at fame once again. But whereas “The Comedian” looked at the acquisition of fame and the prices paid to get it, “Ovation” looks at what happens once someone has it and how it affects the soul; how much of a person remains human when they are constantly reminded of their exterior genius and not their interior being.

It brings up the question: what is the cost of fame? When is someone too famous? As Jordan Peele’s Narrator mentions in his opening monologue: “…what exactly is the value of an ovation so loud it drowns out the performance?” Like “The Comedian”, the final outcome of the episode is up to the viewer. The Twilight Zone, itself executive produced by a famous person, does not seem to say avoid fame at all costs but it does warn of its intrinsic dangers. 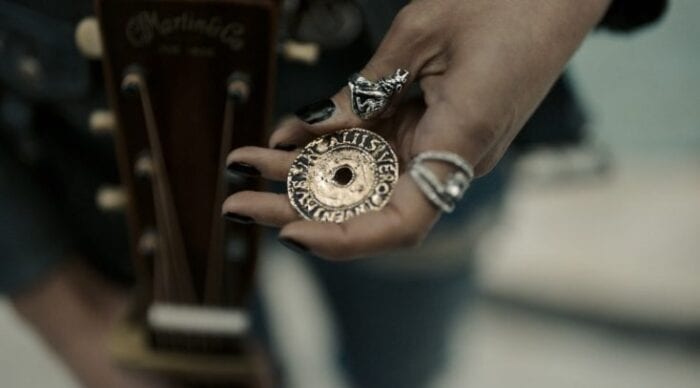 Jasmine Delancey (Jurnee Smollett) is a busker, collecting a few dollars and loose change every day trying to make her dream of being a musician come true. Her successful surgeon sister Zara (Tawny Newsome) thinks it’s the pipe dream of all pipe dreams while her supportive father (Dan Martin) looks on. One day, Jasmine bumps into worldwide music sensation Fiji (Sky Ferreira), who is clearly and physically upset by the endless attention she gets from the public, but admires Jasmine’s music. Fiji gives Jasmine a unique looking coin and wishes her luck and then, as viewed by her adoring public, walks right into the path of a speeding bus.

Jasmine, shaken by this incident, goes to play at Fiji’s memorial with her new talisman on her person, and before she can finish singing is draped with endless applause. Her busking days prove amazingly fruitful as people stand and clap for her performances, so much so that the producer/host of the hit musical competition show Ovation (Thomas Lennon) offers her a chance to perform live on TV. Wearing her coin as a necklace, Jasmine wins Ovation and becomes the nation’s most popular musician, getting standing ovations and applause no matter where she goes or no matter what she does.

Coming to the same realization that Fiji did, that unending fame and attention, especially the constant applause, even when she sings or performs badly, is withering, Jasmine longs to get rid of the seemingly magical coin. But as soon as she does, with the help of her sister, she finds herself missing the adulation and goes into seclusion at her family’s lake house, unsure what to do with her life now that the applause is gone. Even worse, a new force in music is on the rise and Jasmine is uncertain she can allow that person to steal the throne that was once hers. 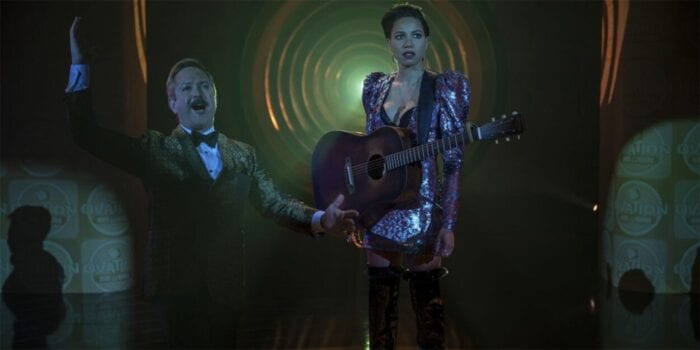 “Ovation” is a solid, workmanlike episode for the science-fiction series, directed with ease but little flair by Ana Lily Amirpour (A Girl Walks Home Alone At Night), providing The Twilight Zone another all-female creative staff behind the writing and directing (story credit for the episode does go to David Weil of Hunters). It is a marked improvement over the surface level thrills of “The Who of You” but still doesn’t quite reach the level of complexity of Chang/Amini’s superior “Meet in the Middle”.

It might be that the lessons being taught are too broad and too obvious. Chang/Amini’s “Meet in the Middle” dealt with a lot of ambiguity and had multiple dimensions to its plot. “Ovation” is much more straightforward. But being too broad/obvious/straightforward does not mean it isn’t a lesson worth teaching, however. There is something to be said about our culture today where fame is a monstrously consuming force that eats up those that are not quite ready for it. And while there is very little supply, that being the personality of the person considered famous (only so much of themselves can be spread around and deprived of privacy), there is a constant demand.

Smollett does a wonderful job, in just 42 minutes of screentime, of going from hopeful busker to praised celebrity to oppressed personality and, finally, to depressed has-been. It is a remarkable performance that carries the episode through the fundamental A-B-C plot scenario. Though Amirpour doesn’t stamp her name on a lot of the direction, there is one scene in which Jasmine enters a surgery in progress where the doctors (and the unconscious open-heart patient) stop what they are doing to clap for her that is eerie. But without Smollett, or this small moment of perversion, the episode might be considered a forgettable one that is just too on the nose.