Every month, we look back at the music from 1995 to explore why these albums are still relevant to us 25 years later. This month brings us Blind Melon’s Soup, Rancid’s …And Out Come The Wolves, Morrisey’s Southpaw Grammar, The Chemical Brothers’ Exit Planet Dust, The Fall’s The 27 Points, and Garbage’s self-titled debut.

When you hear the name “Blind Melon” the first thing to come to mind is likely a tap dancing young girl dressed up in a bee costume and the song “No Rain.” And while that is a great song on a very strong debut album, more people need to give credit to Blind Melon’s second album, Soup, which was released August 15, 1995.

This is another one of those albums that I listen to today and can’t believe it came out in 1995. I think, because of the iconic “No Rain” music video, Blind Melon is lumped in with grunge and alternative bands from the ’90s. But I would say they have more of a classic rock/stoner rock vibe to them. And yet, Soup has this unique, timeless sound all to itself. It sounds like it could have been made a year ago as opposed to 25.

Soup opens with horns and a short preamble from Shannon Hoon, in which he states, “I’m entering a frame bombarded by indecision, where a man like me can easily let the day get out of control.” Then things transition into the album’s first song, “Galaxie,” which perfectly reflects Hoon’s vocal magic and has an upbeat groove throughout.

“2×4” is one of the most rocking songs in Blind Melon’s catalog. It appears to reference Shannon Hoon’s drug use: “Needle, fetal/Someone’s pouring warm gravy all over me/And you say that synthetic therapy/Don’t you know it seems to be so unappealing?/But, oh what a feeling.” Hoon passed away from a drug overdose just a couple of months after Soup was released, and there are a lot of emotional moments on the record that are amplified by his death. It’s always tough to read lyrics like this from someone whose life is taken away too soon.

So, through two songs, Soup sounds like a very good rock record. But then “Vernie” comes on, and things get very interesting. “Vernie” is poetry; it’s beautiful. It paints of picture of Shannon Hoon interacting with a relative he looks up to (I’m thinking his grandmother). “If I had a heart I would want it to be like Vernie’s. Oh what a heart that she has.” The music in the song soars to bring out all of the emotion.

“Skinned” is a quirky tune that features a banjo—and kazoo!—along with some bizarre lyrics. These are the kinds of songs that make Soup a special album.

“Toes Across the Floor” begins as a mellow dream-like song and then explodes with a spiraling guitar riff (and flute) before at the end of the song culminating with Hoon getting raw on his vocals: “I’ll just lay my head down beside this God of mine…” This song is so great, using a lot of clever plays on language (e.g., lie/lie, God/dog).

Later in the album, “Wilt” is a full-on jam. I’d also venture to say it’s the best song about halitosis ever written.

The most haunting moment on Soup occurs on the penultimate track “Mouthful of Cavities.” Featuring vocalist Jena Kraus accompanying Shannon Hoon, when they sing “‘Cause one of these days this will die/So will me and so will you…I write a letter to a friend of mine/I tell him how much I used to love to watch him smile/See I haven’t seen him smile in a little while”—man, I can’t help feeling sad listening to this song. With the backdrop of Hoon’s death shortly after Soup was released, the imagery of this song is heart-breaking. Thinking about our mortality, thinking about an old friend who has fallen out of touch, remembering his smile, feeling sad about it.

Soup should have more acclaim. It’s one of my favorite albums of all time. Unfortunately, it’s the last Blind Melon album made before Shannon Hoon’s death. I would have loved to see what the band could have done after Soup. (I was never able to catch on to the band’s work without Hoon.) It’s tragic because they were just getting started.

Rancid- …And Out Come The Wolves

…And Out Come the Wolves is 25 years old. Let that statement settle for a minute. There is a select number of albums from the mid-‘90s where I listened to at the time and continued to have an impact on me going forward. This album introduced to me Rancid as a young impressionable lad. I remember hearing “Roots Radical” and “Time Bomb” from my brother’s stereo and loving every minute.

1995 was an interesting time for the music industry, looking back. Kurt Cobain had recently died, and grunge had faded. The door was open for new styles to break out and Rancid was the benefactor of good timing. It is astounding to see a punk record in 1995, that was released on the independent label Epitaph, reach gold status have music videos on MTV.

While I heard the hits plenty on the radio and from my brother, I did not purchase this album for myself until after seeing Rancid at Warped Tour in 2003. The floodgates into Rancid fandom were open. They quickly became a huge influence of mine when playing drums in a pop/punk band.

Out Come the Wolves is Rancid’s best sounding album. This era of album production is one of my favorites. Gone is the huge reverb sounds of the ‘80s. Simplicity shined through. This is straight up punk rock, but with sounding way better than their previous record Let’s Go. I love Let’s Go a lot. I wish it had the production value of Out Come the Wolves.

Jerry Finn produced and mixed the record. He happened to work with many notable bands: Green Day, Blink-182, Pennywise, The Living End, The Offspring, and the list goes on. Just realized he mixed my other favorite punk album from this time period: Suicide Machines’ Destruction By Definition.

Rancid managed to cram nineteen tracks on this album. Hard to find a bad song among them. My personal favorited ended up being “Listed M.I.A.” The drum intro fill is so simple yet satisfying to jam out. My favorite Rancid tracks tend to be heavy Lars Frederiksen songs.

The bass player, Matt Freeman, blasts out his best performances of his career on Out Come the Wolves. “Maxwell Murder” lets you know right away as the opening track on the album. Rarely does the bass player in a rock band get the opening note and a kick ass solo on the first track.

The flashy moments and fills from Freeman surely stand out upon first listening. Over the years, I’ve come to appreciate the melodic lines that carry tunes like “Journey To The End Of The Earth.” In the ‘90s, guitar focused music was still king so hearing a bass player take the lead for once was refreshing, especially in punk.

It was a treat revisiting this record once again. Rancid had solid follow ups, but never quite captured the mainstream audience. This was due to Rancid sticking to their roots from the beginning. The music industry quickly changed and did not care to highlight this brand of punk music.

If you don’t own And Out Come The Wolves, I implore you to buy this classic album or at least stream it for a full listen. 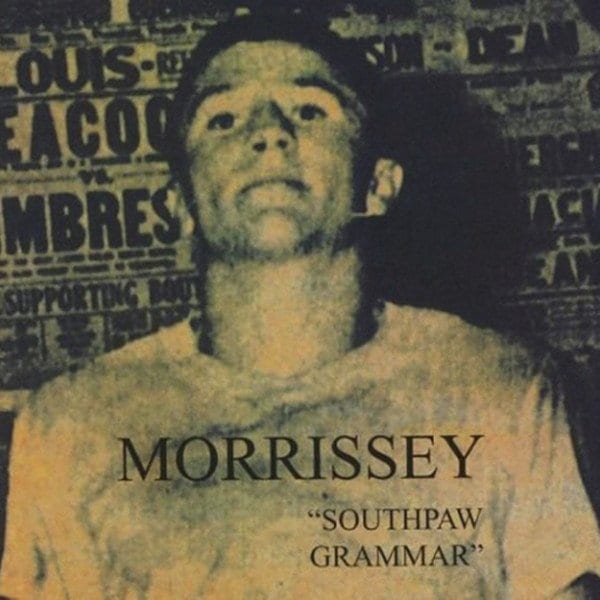 1995 should have been Morrissey’s for the taking. The previous year had seen him regain a level of critical success with the release of arguably his best album, the beautiful, ornate Vauxhaul and I and the gorgeous single “Boxers.” Futhermore, a love for all things English had pervaded popular culture once more with Britpop. Surely the stars were all aligning in Morrissey’s favour?

The sense of confusion and disappointment when Southpaw Grammar arrived in 1995 was palpable. It’s been said that this is the album on which Morrissey went prog, but that is incorrect. This isn’t a Yes album, after all. Rather, remembering Morrissey’s formative obsession with the stranger, artier end of early ‘70s glam rock, this is Morrissey’s attempt at making art-glam in the vein of Roxy Music’s For Your Pleasure. Consider the fact that Morrissey wanted Brian Eno to produce originally. That he got Stephen Lillywhite instead is only part of the problem.

You could easily be forgiven for thinking it’s the artier tracks where things go wrong, but it’s not. Opener “The Teachers are Afraid of the Pupils” inverts the earlier Smiths song “The Headmaster Ritual” by essaying a tale of teachers too scared to discipline unruly children for fear of parents making difficulties for their careers. But the music, stretched out over 11 minutes (unique for Morrissey) and utilising an eerie sample from Shostakovich’s Fifth Symphony, sounded queasy and lurching, a horror movie soundtrack with art-classical pretensions that builds up in power and muscle as it goes along. It’s possibly one of the most underrated things Morrissey’s done.

Elsewhere, “Southpaw” also stretches out, this time for eight minutes, and mixes ghostly scraped strings and echo with a lament for friends who deserted him and ran back home to “ma.” Then there’s “The Operation,” which opens with the sounds of a baying mob and a two-minute drum solo before rolling into its bouncy glam rhythm, a very rockist move for an artist who was considered very anti-rock at the time.

Where Morrissey experiments here, he succeeds, and he wins even more when he marries this to his more typical glam-pop. Singles “The Boy Racer” and “Dagenham Dave” see a new found aggression on display, with “Boy Racer” in particular riding a crashing squall of sound at its climax. “Dagenham Dave” pushes a chord sequence that seems uncertain and trying to second guess itself. Both songs undoubtedly work as singles, though, with big melodic choruses that reach for your heart.

It’s the other, more Morrissey-by-numbers songs that let the album down. “Reader Meet Author” is not bad, but it struggles to meet the heights displayed on the album, let alone in Morrissey’s back catalogue. Meanwhile, “Do Your Best and Don’t Worry” and “Best Friend On The Payroll” sound uninspired and lack the romantic flourish and sense of drama that makes for a really good Morrissey track. Why these three songs were included when, as the 2009 reissue proved, there were other songs recorded at the sessions that were better and instead released as B-sides or not at all, is one of life’s great mysteries. But the fact that Morrissey felt the need to amend and reissue the album years later is telling.

Not the mess it’s generally made out to be, Southpaw Grammar is guilty of no great crimes, just a few lacklustre tunes. At its best, though, it’s a fascinating voyeuristic moment into somebody opening up their creative process. And that can’t be a bad thing.

Next: The Chemical Brothers, The Fall, and Garbage