Kick back, relax, and have a cupper! This week we bartered with the Devil and lost. Our punishment: Exquisite pain. Gorgeous visuals. Merciless gameplay. Precise controls. Yes, it will break you, but no tears please, it is a waste of good suffering.

Plus, Collin finally gets around to playing Resident Evil: Code Veronica X!

With Cuphead‘s surprise announcement that it is now available for the PS4, I decided to fire up my copy and play it again on the Nintendo Switch. The former Xbox exclusive is now on all three major consoles, and any gamer who can handle a little bullet-hell and pattern-recognition combat should feel right at home.

I’m not good at these games. I never have been. I love playing them. I find them to be incredibly engaging, even as my reflexes betray me time and again. I wasn’t a Sega kid, but even I know the glory that is Gunstar Heroes thanks to Virtual Console. Sure, my favorite game, The Binding of Isaac, is often a bullet-hell experience cranked to the Nth degree (anyone who has defeated Hush or Delirium knows what I mean), but games like Cuphead require patience and the ability to learn from your mistakes. Overcoming a boss that was—at one point—seemingly impossible gives you a true feeling of accomplishment when they finally go down.

That’s not the reason I bought this game, I bought it because it didn’t think I would ever have the opportunity. It was an Xbox exclusive, and I’ve never owned an Xbox. Somehow Nintendo got it (along with Ori and the Blind Forest), so I purchased them both upon arrival, and neither disappointed.

Deal with the Devil

The plot focuses on Cuphead and Mugman, two cups living on Inkwell Isles, who lose a bet and are forced to make a deal with the Devil. They must go out and collect the contracts of other people who also owe the devil. If they collect them all, the Devil might cut them a break. Frankly, to me it seems like a trap, but what choice do they have? Better the devil you know, as they say, only literally this time.

The game is broken up into three (borderline four) types of levels. They are predominantly boss fights, follows by some Run-n-Gun style levels complete with the collectible coins you can spend at the local shop, airplane auto-scroll levels, and mausoleums where you fend off spirits.

This game is hard. You can choose to fight bosses on either the Simple or Regular difficulty setting. You’ll have an easier go on Simple, and the boss with not have many unique moves, but you can not collect a contract for defeating them. That can only be done on Regular mode.

My method was always to attempt Regular mode, get my ass handed to me a dozen or so times, then drop down to Simple mode. Once I defeated the boss in Simple mode, I’d move back up to Regular mode, having mastered most of their moves.

Every time you die you are shown a chart of how far you got. This simple addition pushes you to go again. Seeing your little Cuphead silhouette almost make it is crushing and motivating at the same time.

I’m only on Inkwell Isles Two, and have only defeated half of the bosses. Like I said, I’m not very good at these games, but I appreciate that while this game is difficult, it’s not unfair. I wish I had couch co-op friends to help me, as the game supports multiplayer, but I’ve always been a loner, Dottie, a rebel.

This week I was in the mood for survival horror after beating Deadly Premonition 2 (look out for my final review!) so I started playing Resident Evil: Code Veronica X. This has been a blank spot in my experience with the franchise, so it’s been an interesting time so far. I’m about an hour in, and the game front loads a whole bunch of silliness before settling back down into its slow burn roots. I guess Claire Redfield has been investigating…something…since the events of Resident Evil 2 and runs afoul of the wrong people. She’s blasted at by a bunch of people with machine guns. No idea who they are. There’s also a helicopter mounted with some chain guns and she winds up in a gun-in-face standoff with a soldier before being captured and brought to the game’s island prison. Something bad has happened, and the residents have turned…wicked.

Settling into the early days of this franchise kind of feels like wrapping myself up in a warm blanket on a long winter night. The voice acting is comically bad, and the CGI cut scenes are…well, they aren’t the worst thing I’ve ever seen, and they convey motion pretty well, but they aren’t the best thing I’ve ever seen either. But I’ve been sucked in. The prison environment offers a nice change of pace to the usual gothic-esque mansion and former-art-gallery-now-a-police-station of previous entries, although at the point I stopped, I’m now in what the game calls a palace. 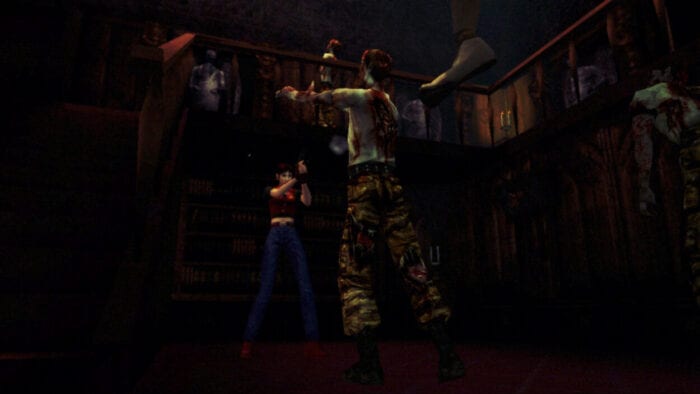 Despite the “totally radical” and “insanely tubular” opening, this is still classic Resident Evil, complete with janky controls and jarring camera angles, as well as item management and hordes of monsters you’re better off avoiding than confronting. I have a vague notion of where the story is going, but outside the setup, it’s been rather spare so far. That being said, I’m glad I’m experiencing this entry in the series, as it tends to be a love it or hate it affair. And with voice acting this bad, I can’t wait to see what else it has in store for me.