I feel like the The Umbrella Academy was the unsung hero of TV shows from last year. Adapted brilliantly from the Dark Horse comics by Gerard Way (of My Chemical Romance fame) and Gabriel Bá, it was popular but didn’t receive nearly enough credit for my liking, as it was one of the best series of 2019. After the abundance of well-known superhero movies and shows we’ve received over the last decade or so, it was a breath of fresh air: a dark, alternative team of heroes that emerged out of the left field at just the right time.

Showrunner Steve Blackman and Writer Jeremy Slater have done a great job of bringing these comics to the small screen, with the creators of the source material also brought in as producers, an obvious yet important decision. We’ve seen the superhero team dynamic many times before, whether it’s the X-Men or Doom Patrol, and comparisons to both have been made. Yes, The Umbrella Academy utilises the former’s blueprint of kids with abilities being raised in a school environment by a rich, old man, and the latter’s more macabre, quirky tone (Way has cited Grant Morrison’s work on Doom Patrol as a major influence). However, The Umbrella Academy offered so much more than these familiar tropes.

Along with the dysfunctional family elements comes a cold and cruel father figure in the form of the eccentric scientific genius Sir Reginald Hargreeves. It makes for great black comedy to see him forgo any emotion in favour of relentlessly training and experimenting on his team of kids, all in an effort to save the world in a militant style…Professor X he most certainly is not. Another layer of Artificial Intelligence is added to the themes with the character of Mom (Grace), a cyborg who’s almost indistinguishable from a human aside from her robotic behaviour.

She provided the care and attention The Umbrella Academy needed, with the character of Diego (Number Two) having a strong connection to her in particular, as she helped him to overcome a stutter during childhood, amongst other things. If I was to say they also have their own Alfred in the form of a humanoid chimpanzee called Pogo, you may laugh. However, thanks to great visual effects from WETA, he’s one of the most serious and solemn characters, who never feels out of place.

Then there’s the character of Number Five, who’s able to time travel but got himself stranded alone in a post-apocalyptic future for 45 years, only to return to the present in his 13-year-old body. Desperate for company in the future, he developed an attachment to a mannequin he found and named Dolores, which he finds in a department store in the present; a relationship equally odd and touching. He was subsequently saved from isolation and became entangled with a bureau who oversee and police the timeline. Add these factors in and what you have is a diverse and dynamic story, clearly written by a fan of everything fantastical that is possible in the medium of comics.

It’s the skillful balance of all these elements, along with more classic tropes, that solidifies The Umbrella Academy’s appeal. We have a demi-Superman with a similar Boy Scout personality in the super-strong Luther (Number One), as well as a proto-Batman in expert marksman Diego. The latter comparison is even referenced by Five in Season 2: “Think Batman but aim lower.” Alison (Number Three) shows how someone with the power of persuasion could easily ascend to fame and fortune, only to have it all unravel for the very same reason. We find Alison on the ropes after losing custody of her daughter, trying desperately to get back to her.

Klaus (Number Four) steals the show as the charismatic and comical junkie who uses narcotics to drown out the dead people he can communicate with. It’s not until the events after the team’s reunion as adults that he figures out his full potential. It’s understandable though when you see that Sir Reginald’s method to try and force him to confront his powers was to lock him in mausoleums for hours and leave him at the mercy of the dead. That kind of trauma definitely justifies his behaviour. Klaus’ abilities also mean that we get to see him converse with the deceased Ben (Number Six)—it’s his influence and them working together that saves the day in the team’s eleventh hour at the end of the first season. After sobering up and some practice, he’s able to channel Ben’s horrific power of unleashing huge, monstrous tentacles that tear apart all enemies quickly and easily.

The characters and their arcs are certainly what’s most compelling about the The Umbrella Academy. Sir Reginald pushing them so hard at such an early age has had lasting effects and ultimately lead to them dissolving as a team. This is where the story begins, with them reuniting due to their father’s death. This was a great first move in terms of writing, as I believe it’s one of the most effective ways to tell a story: after the fact. It’s a trope established best by Watchmen and also used in The Dark Knight Returns and The Incredibles.

By joining the heroes in retirement, we get to see what happens years after the curtain drops on most stories. It’s left to the imagination of the audience to fill in the gaps about their numerous missions, adventures and exploits, which are seen in flashbacks or hinted at, and instead we get to see the most interesting period for their personas. This is an especially poignant technique as it’s gradually revealed that Vanya (Number Seven), who was thought to be ordinary, is actually the most powerful of the family. We see she was left out of most of the team’s activities by their father and was an outcast who was inevitably looked down on.

Sir Reginald put Vanya on medication and even had Alison use her ability to convince her she was normal, as her power was so great and she had no control over it. She murdered numerous nannies just for trying to get her to eat her porridge, hence the creation of Mom. When an obsessive fan (who was also rejected by The Umbrella Academy) finds out, he starts a relationship with her in a plot to unleash her devastating power. He succeeds and when combined with her unstable mind, plus years of repression, she turns evil and becomes The White Violin. The team succeeds in subduing her but not without one last, huge bolt of energy from her that strikes the moon, causing a huge chunk of it to hit the earth and wipe everything out.

Five attempts to use his unstable ability to travel through time to transport them all into the past. He succeeds but scatters each member of the team a year apart, between ‘60-‘63, in Texas. This is where we join the family members at the start of Season 2—we find them in another time and another place. The creators are not resting on their laurels and have made the right choice to have a fresh start instead of giving viewers more of the same.

Five is the latest to arrive and is just in time to see a much more mature, coordinated version of The Umbrella Academy at the height of their powers, fending off a Russian invasion. Vanya seems to have full control of her ability and seeing Klaus confidently summon dead soldiers to battle was the most thrilling thing to behold, this looking like the end of his long road from junkie to superhero. Unfortunately, their efforts aren’t able to save them from the nuclear annihilation that follows shortly after. Five escapes to ten days in the past and once again finds himself in the position of trying to avert Armageddon. It seems like it’s a fate that the team may be bound to.

Each character has tried to start a new life with varying degrees of success. Diego is the worst off as he’s in a mental institution for trying too hard to prevent JFK’s assassination. Vanya has lost her memory, been taken in by a family and has become an au pair of sorts to her son who has learning difficulties. Ironic considering her misdemeanours, it seems as if she’s paying recompense for her previous actions. Luther has lost faith and resorted to being muscle for a prolific gangster, acting as bodyguard, bouncer at his club and his top fighter who can help him rig matches.

Alison, having been the victim of extreme racism immediately after her arrival, is busy rallying protests for equal rights. A poignant theme at the moment with the Black Lives Matter movement that’s still unfolding. Also, after Watchmen recently tackled the subject in such an effective way, it’s good to know that this is still being given attention in the media as it should be. Last but not least is Klaus—he hasn’t disappointed and has inadvertently started his own cult. After a small display of his power it seems things snowballed and he’s now tiring of all the attention; lounging around in his mansion.

At the moment of writing this, I’ve only watched the first three episodes of the new series. It seems like all the characters’ situations have been established and they’re starting to cross each other’s paths. It seems that JFK’s assassination will likely be a pivotal moment and not just because of Diego’s obsession to stop it. I’ll give everyone time to see more of the season before revealing any spoilers and be back with a follow-up article next week to discuss the rest of it. Enjoy! 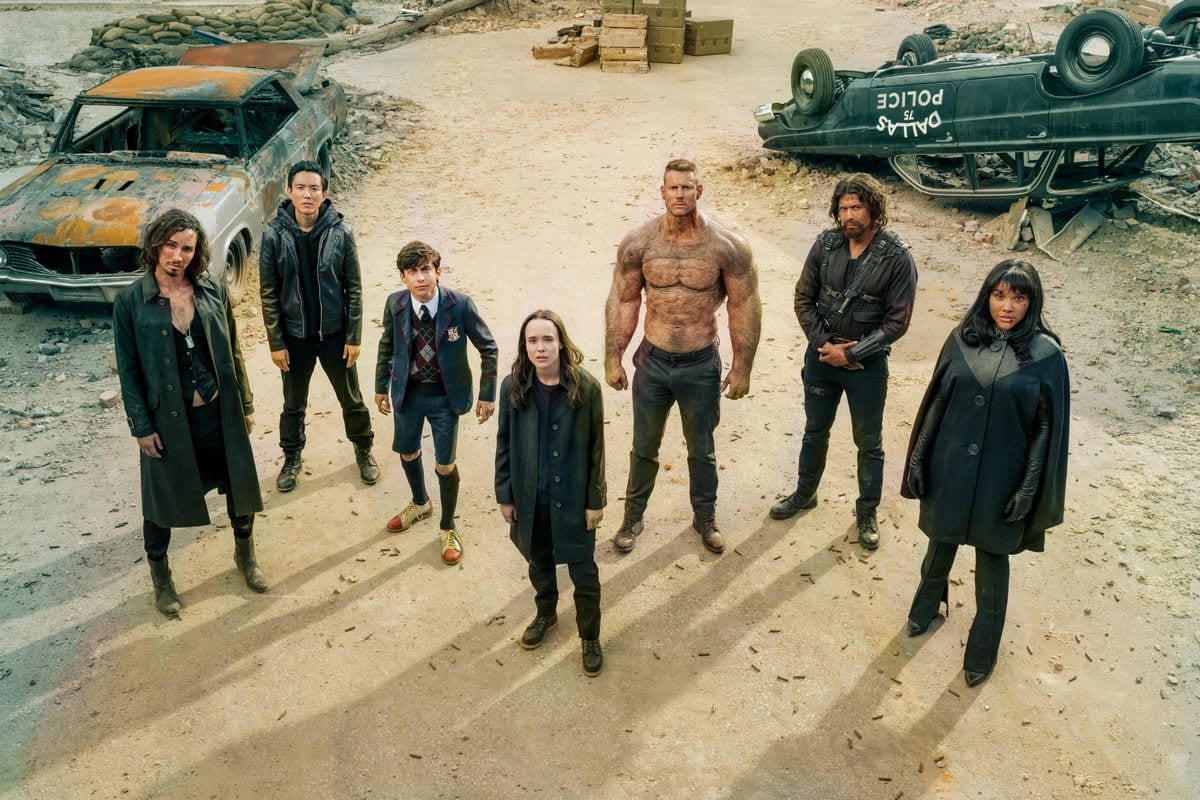