I’m here to make a case for comfort films. I’m sure when you read that, one specific film came to mind. We all have that one movie (or two, or three) that will always put a smile on our face, without fail. It cheers us up when we’re sad, and it brings us out of our depressions. For me, one such film is Coyote Ugly.

Yes, the 2000 romantic comedy featuring hits from 90s pop-country (/hip-hop?) icon LeAnn Rimes. Coyote Ugly is a film that will always have a special place in my heart. When it came out, I was nine going on ten, and I wanted absolutely nothing more than to be a Coyote. Yes, my prepubescent self thought that I could be one of those girls slinging drinks and gyrating atop a bar in New York City. They represented a sort of female liberation, girl power that the Spice Girls had instilled in me at a young age. They were fearless, and I wanted to be fearless too.

It just so happens that August 4, 2020, is the 20th anniversary of this masterpiece, but that just happens to be lucky timing for me. I think that, while this film did not necessarily age like a fine wine, which is possibly due to a pre-9/11 naivety but most likely due to the outdated music and low-key slut-shaming, it does still hold an important place in the film lexicon. 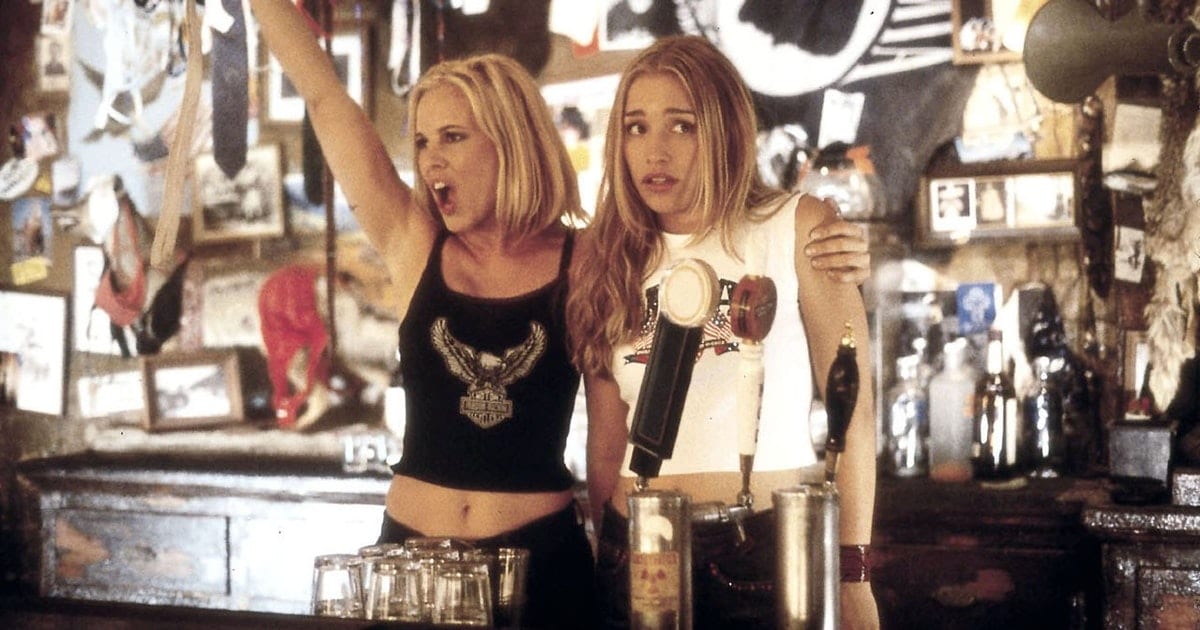 Coyote Ugly has the perfect mix of late-90s nostalgia for a millennial like me, beats that honestly still slap, and a relatable story—a small-town girl trying to “make it” in a big city. Violet Sanford (Piper Perabo) is a girl I think most of us can relate to. She’s sweet and shy with a little bit of Jersey attitude; she takes no shit, but she has a big heart. And did I mention how great the LeAnn Rimes tracks are? I did? Okay.

There’s something about the rom-coms from that era that just hit differently. Sleepless in Seattle, You’ve Got Mail, 10 Things I Hate About You, Never Been Kissed, I could go on for days, but you get the picture. They assume a certain level of peace in the world that was unique to the 90s. I suppose that’s why so many of these films are comfort movies for so many people; they call back to a simpler time when life was seemingly less stressful in terms of global politics.

One character, in particular, is deeply comforting: Violet’s father Bill. Bill Sanford is played by everyone’s favorite on-screen dad, John Goodman. He plays a toll booth operator on what we assume is the NJ Turnpike, or perhaps the Garden State Parkway, and is in less than great health. He’s tough on the outside, but really a big softie on the inside, as shown in the opening scene where he says he’s not going to hug her goodbye, only to run out at the last minute to do so. And Violet appreciates his kind heart greatly.

She sacrifices her practice time to take care of him every Sunday. The two get into a tiff about Violet working at Coyote Ugly, but they always end up forgiving each other. On their way to Violet’s first big gig as a singer/songwriter in NYC, he had his friends light up the toll booths to celebrate his daughter.

There’s something about the familiarity of a Dan Conner from Roseanne type that just warms the heart. He’s the dad some of us wish we had, or the dad some of us remember fondly. He’s pure and just, yet firm and supportive. Every good comfort film needs a warm and fuzzy character like Bill Sanford to truly capture us. He’s the one we cheer on the most, the one we love until the ends of the earth. 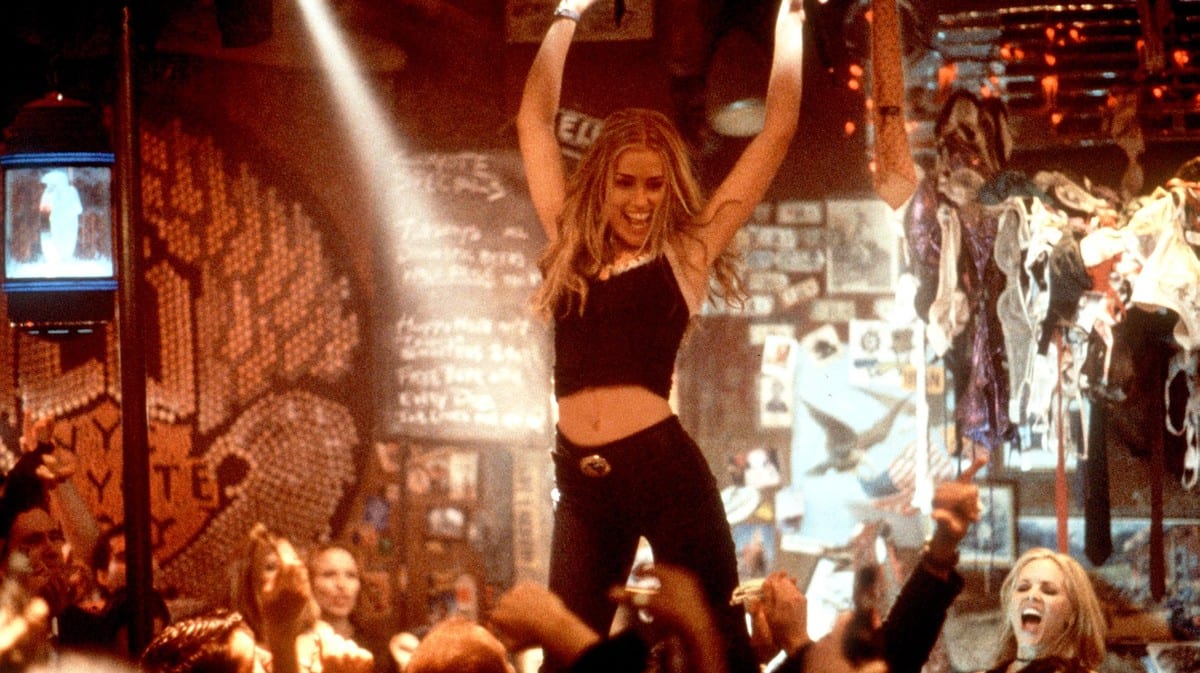 Now, for our main character, the one we’re supposed to relate to and admire. Piper Perabo plays Violet Sanford, a struggling songwriter in a pre-American Idol world. Her first few weeks in New York City are rough. She’s trying to get her demo tape to the right agents and trying to find something to pay the bills when fate brings the Coyotes to her at a diner late one night. She fails her first audition, but eventually makes her way to being a true Coyote, with a little help from her singing chops. She fights her way to the top and she just makes it. Yes, it’s cheesy and overly obvious, but it’s hopeful in a way only a pre-9/11 movie can accomplish.

Seeing a character win gives you a good feeling. Violet gets the guy (with the sexy accent of course). She brings success to the Coyote Ugly bar. She makes up with her dad, and crushes it at her first big performance of her hit single, “Can’t Fight the Moonlight”. She’s invincible: a New York City miracle. When we see Violet win, we feel like we can win too. And this goes for any character in a trashy rom-com comfort film: Elise and Brenda and Annie in First Wives Club, Vivian in Pretty Woman, Gracie Hart in Miss Congeniality. These characters uplift us and empower us. Their hectic journeys that always turn out good provide us with a sense of calm. A comfort film would be nothing without a character we can both relate to and look up to.

Lastly, I want to discuss the music. This has to be one of the most iconic soundtracks of the early aughts. Not just the published soundtrack, but every song that was included in the film. The quintessential fashion montage to “Unbelievable”. The first line dance to “The Devil Went Down to Georgia”. The sexy bar dance to “Pour Some Sugar on Me”. These scenes were all so on the nose that they worked so well in Coyote Ugly’s favor. They really round out that nostalgic feel that’s required for a feel-good comfort film. 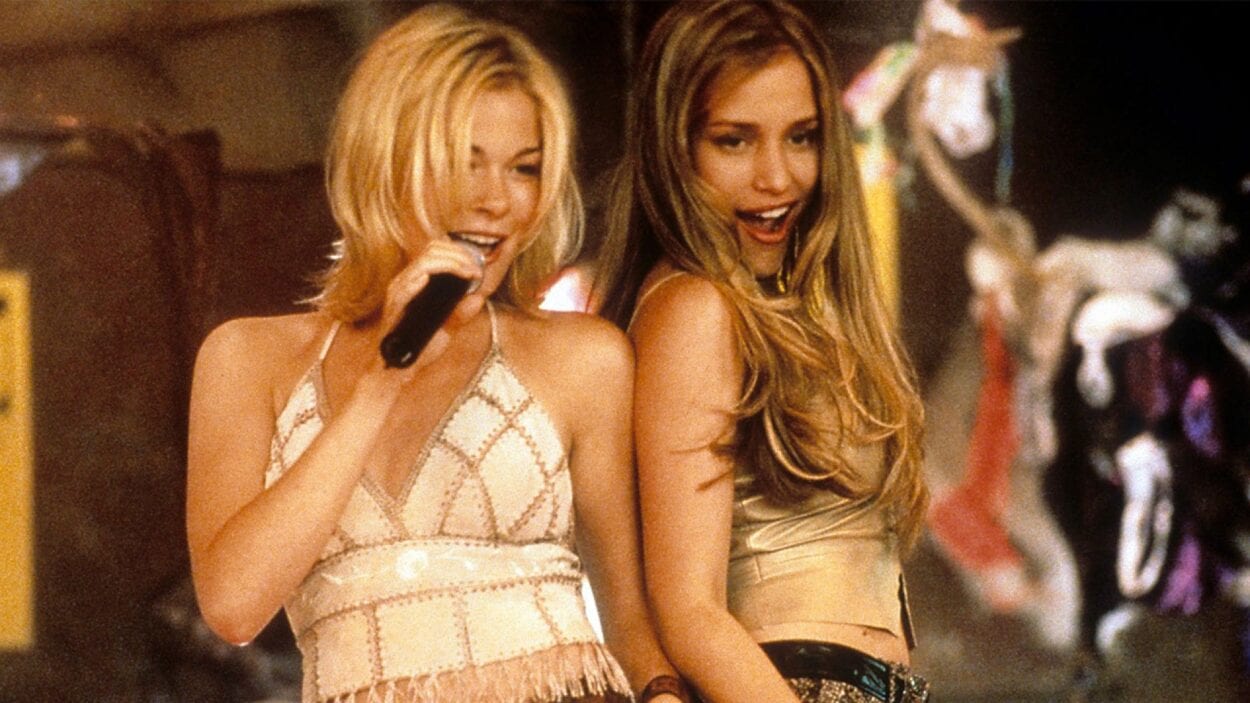 The real pièce de résistance of Coyote Ugly is LeAnn Rimes’ tracks. She wrote four songs for the film: the theme “Can’t Fight the Moonlight”, “But I Do Love You”, “Please Remember”, and “The Right Kind of Wrong”. Genre-wise, one can only describe Ms. Rimes’ songs as some crossroads of country, pop, and hip-hop beats. If you listened to any top 40 radio station in 2000, you definitely heard at least one of these songs on repeat.

I think that’s where the comfort really kicks in for me; it reminds me of car rides in late summer with my family, not a care in the world. I was always one of those kids who stared out the window for the entire drive, imagining my life were a movie. Pop songs do such a good job at being these reliable, catchy, fun songs that it’s impossible not to feel comforted by them. We need these types of positive sense memories to remind us that things are not always bad.

Comfort films are rarely meant to be high art. Exceptions are made, but for the most part, they’re all the same. They’re generally kind of trashy, predictable, and always have a happy ending—that’s what makes them make us feel so good. It’s important to have a comfort film, to bring you out of your darkest situations, to make bad days good. They serve an important purpose in the film world. Comfort films may not be “good” films but I will go down fighting for them.