I’d like to start off this late-to-the-party celebration of Preacher’s 25th anniversary with a bit of background on my experience with comics books. I’ve always enjoyed them, but it wasn’t until about 3 or 4 years ago that I really started getting into collecting them. Back in high school I primarily read The Walking Dead, but about halfway through college, I paid a visit to a local comic book shop with a friend. I found the first volume of Preacher on the shelf and was taken in by its description. I like Westerns, and the comic seemed to be something of a modern day take on the genre. And while it certainly is that, to my surprise, it blended Westerns with many other genres, and I was blown away by how much it hooked me. It also opened the door for my own personal exploration of the comic book medium, and whereas I used to be hesitant about collecting them, I now have a whole shelf at home dedicated to various comics and manga. Preacher remains something special.

For those who don’t know, the comic book series follows a trio of characters on their trip across America in an effort to find God. You have Cassidy, an Irish sunglasses-wearing dude who, as it turns out, is a vampire. There’s Tulip, a tough-and-sexy young woman who is much more than just eye candy. And lastly, there’s Jesse Custer, a former preacher who has become the host for a half demon, half angel being. This entity allows him to use the Word of God, which will force people to do whatever he says in the most literal way possible. For instance, in the second volume, a guy pulls a gun on him and, in a fit of righteous fury, he tells the man to eat it. The man then breaks all of his teeth on the gun’s barrel and continues chewing.

The comic’s best feature is its ability to juggle multiple tones and genres and never once feeling at odds with itself. Cassidy is a very early introduction to the idea that this version of America holds morbid secrets of the supernatural variety, and indeed, the fact that he’s a vampire is just the tip of the iceberg. In addition to angels and demons, there are vampires and ghosts as well as morbid serial killers, bizarre cults, and more than a few sexual deviants. At times, it’s crassly hilarious, and at others, it’s genuinely horrifying. Somehow scenes with real emotional weight, particularly later on in the series, can exist alongside scenes where a character named Frankie the Eunuch shares a monologue about his missing manhood.

This unpredictability lends itself well to the comic’s road movie format. After an opening that sees Jesse’s possession ending with his church burning down and killing everyone in it, the trio sets out to make God answer for the planet He’s created. One where bad people get away with hurting the good, and seemingly random tragedies claim the lives of people daily. And traveling across America allows for examples of this to pop up time and time again. While most of the villains are comically inept and vulgar, it does sit in the back of the reader’s mind that it’s tough to reconcile a supposedly all-loving God allowing people like this to exist. 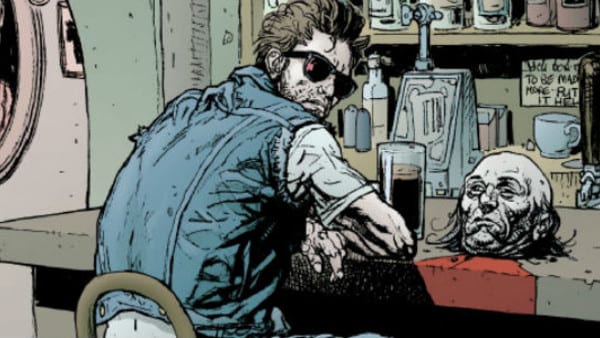 One of the earliest instances of this is with the character of Jesus de Sade. He’s a sexual deviant that regularly throws orgies, and a lot of this is played for laughs. Jesse walks through Jesus’s den of iniquity and mostly shrugs at all the depraved pleasures people are indulging in. And, like the people inside, Garth Ennis indulges in the perverse and pushing the limit of what can be shown in a comic. But a seemingly comical scene is entirely flipped on its head when Jesse discovers a room where a young boy is being abused. Jesus tries to justify this by saying it’s his duty to allow his clients to indulge in whatever fantasies they choose, and Jesse reacts with righteous fury. This particular scene catches the reader off guard thanks to how out of nowhere it is. In hindsight, as awful as it is, it does make sense. Not every villain pushes the envelope in the way that Jesus de Sade does, but each one is uniquely perverse and awful. Ennis makes it abundantly clear that Jesse is a pure figure for good, and the people he and his friends go up against are not to be empathized with. In a lesser comic, this kind of black and white moral posturing would come across as far too simple, but the version of reality that Preacher summons allows for these awful people to feel plausible and makes you actively root for Jesse and the crew to deliver justice upon them.

Underneath all of the vulgarity and blasphemy is a very real and nuanced exploration of faith and religion. Jesse becomes a preacher because he was raised by some very sadistic people as a child and forced into faith by them (this culminates in the fantastic first arc, where Jesse travels back to the ranch he was abused at with Cassidy and Tulip to confront the people that forced him into this lifestyle). His history with Christianity is traumatic, and speaks to the way that religion is passed down generation to generation. While the experience that Jesse goes through is exaggerated (at one point, he is forced into a coffin for days on end at the bottom of a lake as punishment for a perceived misdeed), it makes a statement of how religion and beliefs can often be forced on individuals and how that comes to affect them as adults. It takes a very hard stance that this is, more times than not, a very bad thing. 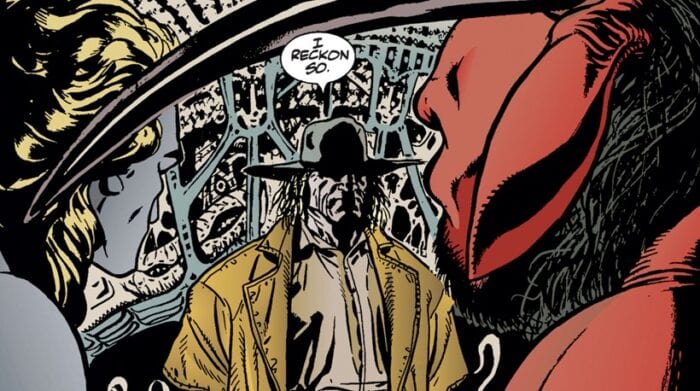 Further driving this point home is the character of The Saint of Killers. He is, for all intents and purposes, the archangel of death, and aside from having one of the most metal names ever and acting as a way to have an all-powerful cowboy character, he acts as a very dark mirror to what Jesse has the potential to become. The Saint is unkillable and has two revolvers that never run out, never miss their target, and can kill absolutely anything. This includes angels, demons, and as we find out during a later story arc involving the Saint’s past as a regular man, the devil himself. We learn that his family was taken from him by sickness and that this stripped him of any humanity he had left. As an unstoppable force of violence, all he has is his anger and resentment towards God for allowing someone like himself to ever be made in the first place.

Not only is this just a really awesome idea for a quasi-antagonist, but he ultimately becomes the comic’s biggest argument in favor of atheism. The Saint, as a man, was brutal and unrelenting, and when he tried to find peace, it was ripped away from him violently. He hates himself as much as he hates the world, if not more so. And his fury knows no bounds, with him at one point even withstanding a nuke going off. He says, “Not enough gun.” It’s darkly hilarious in the moment, but it’s a reminder that he is a monster that is forced to live with that knowledge. He can’t be killed and can only kill others. All because of the rules God put in place when He made the world.

While comics have come a long way since Preacher debuted in 1995, it’s tough to argue that it didn’t in some way move the medium forward. Elements of it are certainly problematic by modern standards, not the least of which is the way Tulip is handled later on, but those flaws make its strengths stand out even more. Because underneath the gross out, ultra-vulgar comedy and hyper violence, there’s a real exploration of humanity and spirituality lying at the series’ core. It’s bold enough to suggest that the world makes more sense without a divine all-loving creator, and that the human experience itself is the point of our existence. Controversial? Certainly. Intellectually interesting? Yes. As someone whose own spirituality shifts from day to day, this series still provides me with a lot of questions about the nature of our existence.

I was raised a Christian, but as I’ve gotten older, I find myself questioning the idea of a benevolent God and savior more and more with each passing day. It’s difficult not to—the world is currently in the middle of a pandemic, social unrest is at an all-time high, and for me and many others, the current leadership is questionable at best and downright evil at its worst. Preacher makes the case that a world like this doesn’t make sense if God is real. I am still undecided on the issue of a higher power, but the actual answers it provides for how an omnipotent being that supposedly loves everyone equally could possibly be real are bold and tough to ignore. 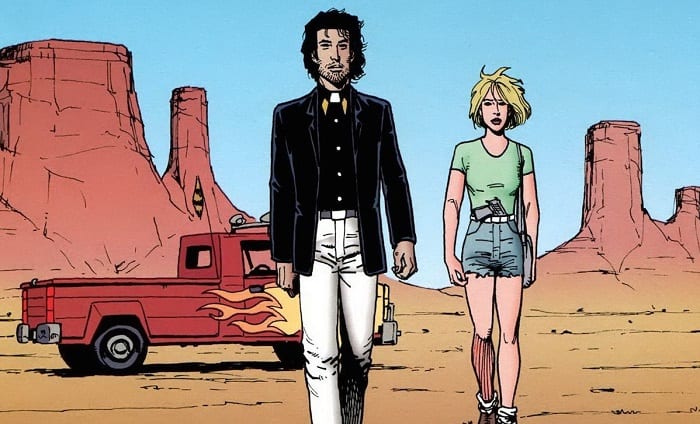 But even ignoring the questions about theology and our own existence that Preacher conjures up, the series remains a unique, wildly unpredictable road trip through the darkest and most perverse back streets of America. It’s filled with unforgettable characters, and surprisingly, it gives most of them emotional, bittersweet closure to their own arcs. Ennis would replicate a lot of what he did with Preacher in his series The Boys—questioning higher powers (superheroes), taking authority down a few pegs, exploring toxic relationships, blending action with real horror, and pushing the envelope of good taste— but in my opinion that series almost went too far in spots. There is stuff in that comic that makes you feel downright gross, and while the same can be said of Preacher, it balances out all the depravity with real pathos and downright good storytelling. It remembers that all the sh*t jokes and theological questioning mean nothing if the story behind them is weak, and in the case of Preacher, it delivers on everything that makes Westerns so good. It turned 25 earlier this year, and it’s sure to endure as a staple of edgy comics for another 25.