This week we’re just playing Yakuza Kiwami and Earthlock. Take it away, Collin!

This week I managed to snag some days off, and for a variety of reasons, I was having trouble sleeping. I was up early one morning, and kind of bouncing between a few different titles. Nothing was really doing it for me, so on a whim I started Yakuza Kiwami, the 2017 remake of the series’ original entry, and the follow up to the outstanding Yakuza 0. And like with that much-loved prequel, I was immediately drawn in by the sheer uniqueness of what was on offer.

You once again step into the sharp-looking shoes of Kazuma Kiryu in Yakuza Kiwami, and in this game, he gets caught up in a plot concerning a missing girl and 10 billion yen gone missing from the Tojo Clan, the central family the series focuses on (at least up to this point). While much of it is surely revised from the game’s original release to more closely stick to the continuity established in Yakuza 0, the plot really flows nicely from that prequel. 0 went a long way in having a nice, standalone plot that still established a lot of the important players in Kiwami, almost all of whom age believably as well. The main chunk of the game takes place 17 years after 0, so everyone is visually older. The same goes for Kamurocho, the district of Tokyo that serves as the main world map. There are lots of small changes to the city streets from 0, giving it a really strong sense of place and time. It’s familiar, but notably changed, kind of like returning to a childhood home a decade after you leave.

I will say that the fact that it’s a remake of the first game holds it back in a few areas. 0 gave you the ability to play as both Kiryu and Goro Majima, giving each of them their own extensive skill trees and side quests, as well as giving you a whole second district to explore. The fact that you’re constrained to just Kamurocho, and only Kiryu, is slightly disappointing. The side quests aren’t quite as lively, either. In 0, each one felt almost like an episode of a sitcom starring a grizzled former gang member. Even when the tasks you were being asked to complete were tedious, the personalities involved were so charming, funny, or just plain odd that you could forgive the weak design. A large number of the side quests I completed (about 25 of the available 78) were rather forgettable, which was kind of disappointing. The bizarre comedy leanings of 0 went a long way to giving the game its unique sense of identity.

But then again, Kiwami retcons Goro Majima’s involvement in the story. I guess in the original release he merely had an interest in Kiryu and was functionally a friendly rival. In this game, he becomes obsessed with helping Kiryu reclaim his lost abilities following his stint in prison near the beginning of the game, and it opens into a game-spanning side quest called “Majima Everywhere.” True to its name, Majima finds every excuse he can to fight Kiryu and help him unlock his lost abilities, from bumping into him around town to setting up elaborate disguises and scenarios. Most of the series’ absurdist sense of humor comes from this quest in this installment, and it had me in tears at points. It can get repetitive fighting Majima over and over again, but the way he’s written as a Japanese, hyper-violent Bugs Bunny keeps you on your toes. Seriously, name one other game that has its insane gangster antagonist buy out a club just so he can pole dance to slow love ballads in front of the protagonist. I’ll wait.

Kiwami’s main plot also helps make up for the shortcomings in gameplay options. Like 0, the main story is mostly po-faced, with intense, high stakes melodrama taking place in every cut scene. It’s captivating stuff, with so many plot twists, double-crosses, shocking violence, and cathartic victories that it’s a wonder there aren’t more cinematic adaptations of it yet (although there’s apparently a Takashii Miike movie called Like a Dragon based off this first entry). Somehow, the seriousness and intensity of the main story never clashes with the goofy side activities. In fact, they complement each other well.

I guess you could accuse this franchise of playing it too safe. Both 0 and Kiwami share a whole lot of elements, not the least of which is the same overworld and character models. It’s very much iterative rather than innovative, but at the same time, I don’t know of another game series that delivers the oddly-specific experience the Yakuza games do. And honestly, after having beaten two games now, I really want to see where the stories in the next games go. Kiryu is a wonderful protagonist, being well characterized so you understand him, but flexible enough that—regardless of how stupid it may be—the idea of him playing Sega classics in an arcade during his spare time comes across as consistent with who he is. And each game changes Kamurocho with an absolutely stupid amount of detail (I just read online that in both 0 and Kiwami, cab fares are time period accurate), lending the series a certain sense of…gravitas, maybe? You see characters age and places change, and that’s a fascinating idea for a series that was once billed as a Japanese Grand Theft Auto clone. In other words, you could absolutely argue that the series doesn’t change things up enough, but when it’s this engaging, unique, and oftentimes hilarious, it’s tough not to love it anyways.

I’ve had my eye on Earthlock for awhile, and a recent sale on the Switch eShop got me to finally pull the trigger on getting this game. Released in 2016 as Earthlock: Festival of Magic, the game (no longer available) apparently had some shortcomings. The development team at Snowcastle Games were actually hard at work on the follow-up to this game when they decided to go back and remake the original. The new, extended version, simply called Earthlock, is the version I played on the Switch.

While this game is your standard action-RPG featuring an unlikely combination of heroes on a journey, it’s a slick, well-made adventure. The story, graphics, and gameplay are not revolutionary. You’ve played this game before. However, this is an indie game lacking the budget to include things such as voice acting and high octane cutscenes. What it has is charm and a story that builds slowly (sometimes, a little too slow).

Combat is turn based, not unlike Dragon Quest or the early Final Fantasy games. All your characters have certain strengths, and learning what they are requires you to not fall into the “mash the action button to attack” trap. That will only get you so far.

Another aspect of combat that is interesting is the use of “Stances.” This battle mechanic makes you commit to a certain approach to combat, as changing your stance (at least thus far into the game) costs you a turn. If, for example, Amon wants to switch between his close-combat attacks (and attempts at thievery) to his ranged weapon attacks, he’ll need to change his stance.

Gnart, the hogbunny, can act as your healer, or as a buff that can increase the party’s attack and defensive powers. But again, he’ll need to switch between these stances in order to do so. This will require careful planning, otherwise your party can fall rather quickly once the game picks up.

You are free to wander as you please (and I always tend to go the opposite direction of where the game clearly wants me to), but you will encounter enemies beyond your ability. Luckily, you can pull a Bjork and “Play Dead” if you’re outmatched.

Plumpet Island is your main base of operations, where you can do some item farming, crafting, and recuperating. There’s nothing here you haven’t seen before, but again, this is a standard RPG. I realize that sounds like a negative, but I appreciate these types of games, especially when modern, big budget RPGs often tend to over-complicate things. I don’t know how many games I’ve bailed on due to the opening hours having endless tutorials where you’re inundated with complicated explanations about how to do far too many thing early on.

The characters are nothing special, but they do have a nice rapport with each other. I would equate this game to comfort food. You know what you’re going to get, and it makes you feel good, but you probably won’t remember it in a few days. Last month, Snowcastle Games dropped a teaser trailer for the sequel, Earthlock 2, and based on the short snippet, it seems to hew stylistically close to the original. As always, I love to champion indie games, especially when I see potential, and this game—for all its shortcomings—shows me that this development team could certainly make a bigger, more complex game if given the time and budget to do so. I recommend picking this game up (especially on sale) if you’re a fan of old fashioned RPGs. 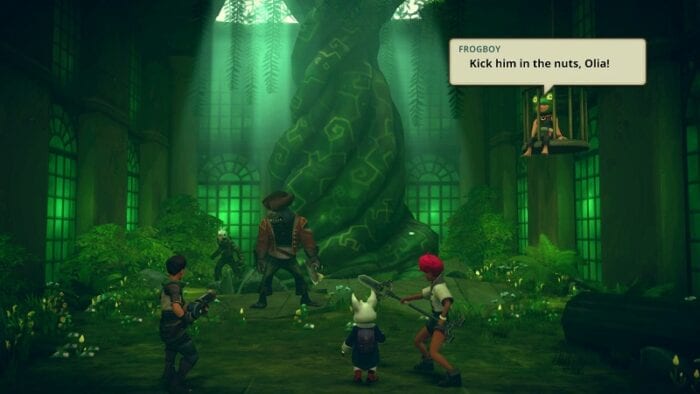