The best part about watching Star Trek, in most of its iterations, is that you get multi-dimensional storytelling: you get the moments that appeal to your inner nerd, sure, but you also get heady discussions on the purpose of being. Most times, Trek will act as a metaphor for the human condition, showing avatars of what represents humankind going up against the Other and coming out with understanding and meaning. The experiences of the Enterprise and her fine crew are meant to symbolize humanity’s journey through morality and ethics, not just through the stars.

But sometimes that metaphor takes more literal forms, as is the case with the first season episode “The Enemy Within.” This is an early episode in the show’s run that utilizes its unique storytelling capabilities by creating a malfunction in one of its fantastical appliances, the transporter, and turning it into a morality play on the essence of existence. What makes us human? That’s lofty material for a show that, on the surface, is about travelers in space encountering strange new life and exotic new civilizations for the sake of living room, family entertainment.

The Enterprise is doing a geological survey of Alpha 177, a planet whose temperature sinks to hundreds of degrees below zero as the day turns into night. After visiting his crew down on the planet’s surface, Captain Kirk (William Shatner) returns to the ship thanks to the main transporter. However, the transporter suffers a malfunction and Kirk arrives safely but a little shaken. Chief Engineer Scott (James Doohan) takes him to sickbay, and while they’re gone a second version of Kirk beams up as well, this one more energetic and alive.

As it turns out, Kirk has been split into two by the malfunctioning transporter; however there isn’t simply a duplicate of him aboard the ship but a portion of his essence. One half, the good half, retains the kind and intelligent qualities of Kirk but lacks leadership and confidence. The imposter, who beamed up second, is the evil side which contains ambition and vigilance, but also unshackled violence. As the evil version of Kirk roams the ship, harassing crewmen and vying to take over the ship, the good version struggles with his ability to perform as Captain, decision making becoming harder and harder as he remains uncertain.

In the end, the Enterprise crew must find a way to fix the transporter not only to rescue the crew stuck on the freezing planet’s surface below but also to merge Kirk together as one whole person again. The one problem, of course, is the evil Kirk wants to stay just the way he is and it might take killing him to stop him. But would that kill Captain Kirk’s essence, leaving him a shell of the man he was before, literally halved? Only the good half of Kirk, Spock (Leonard Nimoy), Scott, and Dr. McCoy (DeForest Kelley) can truly find the answer. 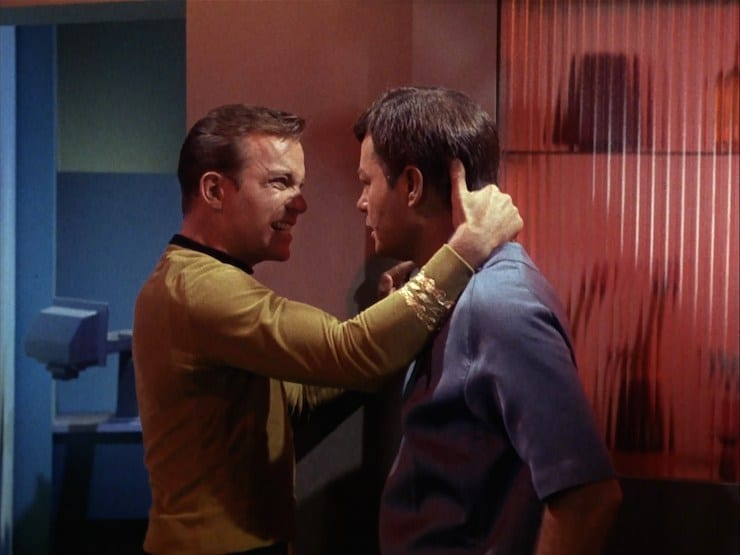 Gene Roddenberry’s “Wagon Train to the Stars,” the way he viewed Star Trek, was always about the noble hero rolling into a mysterious town and righting wrongs, just on an intergalactic level. But every once in a while the hero had bigger, more personal fish to fry and in the case of “The Enemy Within,” our noble hero in Kirk must battle himself in a literal and metaphorical sense. Written by the legendary Richard Matheson, who wrote for other high concept genre fare like The Twilight Zone, and literally mastered the narrative of man being alone in the universe with I Am Legend, the concept of dealing with inner demons extends beyond the physically literal manifestations of Kirk fighting each other with fisticuffs.

The most compelling aspect of the episode is the conceit that we all need an “evil” side to function as a complete human being. The “good” Kirk is a kind and passionate man but without his evil side he appears to have lost his intuition and even some of his intelligence. It is true that isolated outside of the good Kirk, the evil version runs rampant on the ship, committing violence and sexual assault. Does it imply that Kirk has those elements within him? The shocking part is that it indeed does. Most shows, depicting a hero, might steer clear of that revelation but Star Trek gets into the essence of what we are; the internal makeup of what a person can be, would be, shall be.

In the end, Kirk, when whole, is not a murdering rapist mainly because he has other qualities within himself that balance out the natural negatives. When separated from his evil side, he may lose aspects of his being but he still retains the inherent goodness we have inside us. So while Trek may be bold enough to admit to humanity’s frailty on the interior of us all, it also has the hope and confidence to portray us as ultimately good people. Most apparent of this conceit is the fact that the evil Kirk imposter also can’t function without his good side, proving that evil alone is not a dominating force in the world.

The Original Series is often lauded as a classic even while being mocked for its outlandish color and goofy, sometimes outdated material. But “The Enemy Within,” much like other episodes, shows the power of a good narrative knows no time limits. Sure, you might tune in and see a dog with a goofy horn appliance on its head and have to accept it is an alien creature but you’ll leave learning something about yourself. That is the essence of Star Trek: to boldly go where no one has gone before. Few television shows can actually say that they have.