Sitting down and speaking with Tom Mullen, I never doubted for a second how seriously he takes emo. This genre of music, whose definition is often misinterpreted, was a subject we would cover in great detail during our interview. Tom’s book, The Anthology of Emo Volume 2, is due out this September (available for pre-order here) and make no mistake about it, it’s a labor of love and a mission at the same time: a mission to preserve the history of a genre of music loved by many, and whose influence is still heavily felt today. Interviews in the book include Jim Adkins from Jimmy Eat World, Bob Nanna from Braid / Hey Mercedes, Jon Bunch from Sense Field, Chris Conley from Saves The Day and more.

Listening to Tom discuss the process behind the creation of the book was something I found myself heavily fascinated by. Maybe it’s my shared love of the genre or perhaps it’s an admiration for anyone who feels this passionate about anything that drew me in. “If people haven’t read the first book, it’s enjoying a conversation with an artist in text form. It is basically my podcast as a book, it’s edited for a book. And for those that have had the read the first one and are excited about the second one, I have fixed up the first one a little bit. With the second one, we’ve added some more context to the interviews, a little more. I mean, I really went through these with a fine tooth comb on the second volume and the first. I learned a lot doing it the first time, and I got better doing it the second.”

Tom continued: “I started in radio and I saw this as putting together an hour of programming. The fan that only knows maybe the popular stuff, and then there’s an obscure band in there that they might not know about and then they learn about. Or vice versa, someone that just loves the obscure ones, and then doesn’t realize that “Wait a minute, that giant artist, actually they’re kind of cool”. So it was a way to get everybody, when they looked at the list of the 10 artists, to be like, “Oh, I really like that.” Or “I don’t know about them.” I tried to make it something for everybody.”

Our conversation would inevitably take an understandable turn when we discussed the late Jon Bunch. “I think it’d be great if people learned about Jon Bunch from Sense Field. It was unfortunately the last interview he ever did, I was his last person that interviewed him. It was a big responsibility for me to make sure that the podcast itself was well done and in honor of him, and then same thing with the transcription and his inclusion in the book. I wanted to make sure that his piece was well respected and well done, so I took a lot of care. I would love if someone did know one of the bigger artists, and they found out that how influential Jon was or how much of an impact he had on the scene with a lot of people that maybe they don’t know, maybe they didn’t realize”.

“I mean, the podcast had been out, and we did a tribute episode as well. There was a show in Santa Ana that all these bands were interviewed for that we did an episode, so there’s actually a section after his interview with a bunch of quotes from that tribute episode that we did after. There’s that little nugget in there that most people will figure out when they start reading through it. But I think for Jon and myself, I was honored to be able to speak to him, and we had a great chat, and I wanted to do what was right. I wanted to make sure that his legacy was passed on and that people found out about him, and people understood his impact because stuff isn’t permanent. Instagram is not permanent. MySpace is not permanent. These things come and go. So for things like that, a book or a podcast, I’m heavily into archiving. I’m heavily into documenting this scene in a way that will, long after I’m gone, someone might stumble upon and understand the history a little bit deeper. That’s the bigger meaning behind it, and I thought it really made sense to have him in the second volume because I thought it was important for his family, important for fans of him, and I think more people need to be mentioning him. Again, when they’re gone, or they’re not creating things, or we’re in this 24 hour news cycle, things get forgotten.” 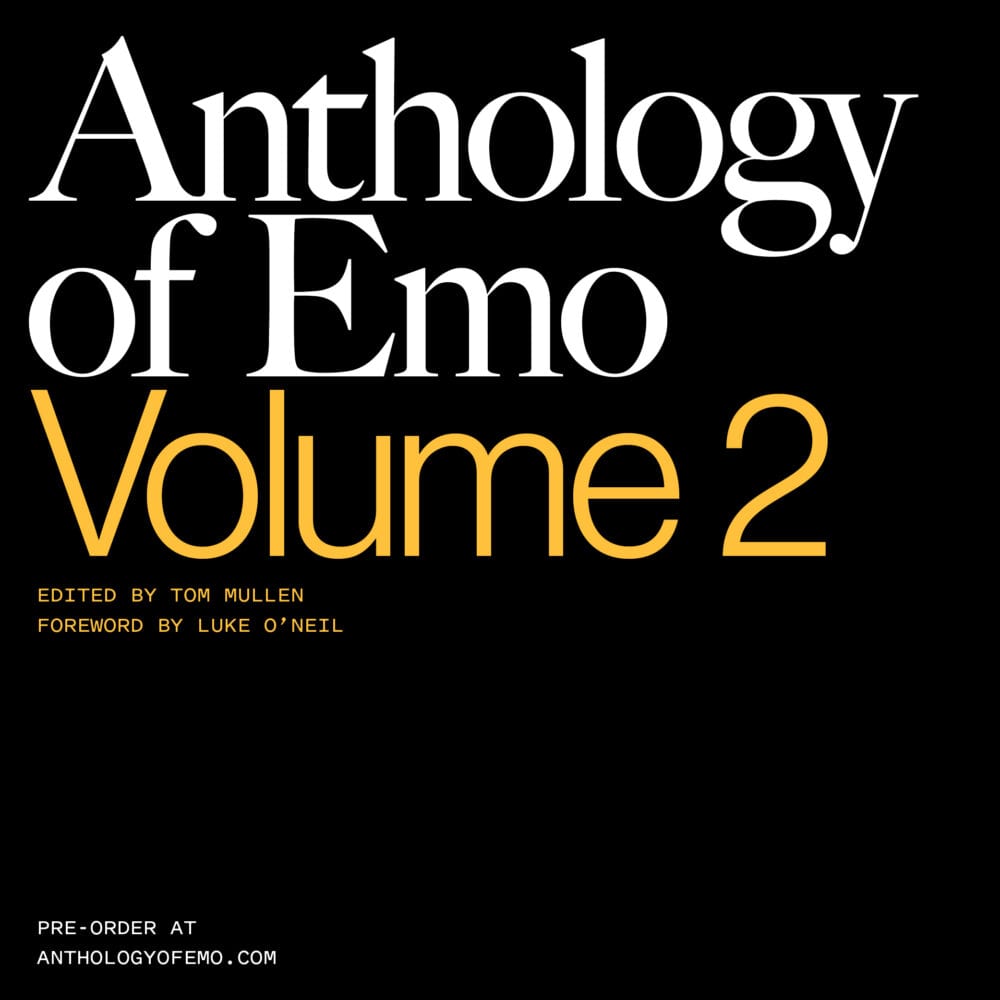 Discussing the lineage of the genre was something I absolutely wanted to bring up. While it didn’t directly tie into the book, when you get a genuine historian on the phone, it’s not a question you want to skip. “This never went away. Just because My Chemical Romance announces a tour doesn’t mean that emo is back. It never left. These bands and this scene has had a lot of changes and morphs, and it’s been great to watch. I love a lot of the new school stuff that’s been coming out since ’09, absolutely amazing bands and amazing music. You can see the lineage. You can see the same approach regardless of technology, regardless of what things are available to them. You can see it. You can see that they want to do this. This isn’t just, “Oh my God, I’m going to get popular”. “Oh man, well, this is the genre to play because everybody loves it, we’ll get signed”. These bands aren’t that. This is, I’m making this sound and I believe in this and it connects. I can tell when someone’s trying to force it and be, “I’m going to try to be this really popular genre at the moment, and we’re going to be huge”. I see right through it. So for me, I love what’s happening today. My whole goal for the whole thing was that there’s a longer history than what you might be aware of. And that’s anybody. That’s someone that might be just into the new school emo revival, or they’re into the mid-2000s and they thought it just began and ended then when My Chemical Romance broke up. Or they thought that it died in the ’80s, and for people to understand that there’s these pockets.”

As for the beginnings of the genre, Tom was quick to answer that as well. “Well, it definitely starts with Rites of Spring and Embrace. I had Guy on late last year to talk about all this, and he goes in-depth about ’emo’, the word, and when he first heard it and the impact of what he was making and what happened since. I’m not going to speak for him, but if anyone wants to check out that episode, he really goes deep into this. But I think that is the beginning. There’s people that complain or argue, that say everything’s emo. Well, of course. Everything is also punk. Everything is also indie. There’s a few things that make something sound like this, and it’s not forced. It’s something that you want to do. It’s not like, “I’m going to make emo music”. You need to be in it. It’s kind of like the inside kid that sits on the message board and talks shit. You need to go to the show. You need to start a distro. You need to make a zine. You need to make a website, or you need to help a band out, or book a tour. Those types of things, you start to see the inner workings of how the scene works and it becomes a little more clear, or clearer to the person experiencing that. So for me, it starts in the ’80s, starts with Rites of Spring and Embrace, and has stayed alive. And I think that’s the thing that most people don’t realize. A lot of when My Chemical Romance announced all those dates, I predicted all these outlets writing their headlines and saying, “Emo is back”, when that’s disrespectful. That’s not the case. Just because this band that was very, very popular and on top 40 radio, they were on MTV, they were on all these places that were mass-marketed to a lot of people, and hats off to them.” 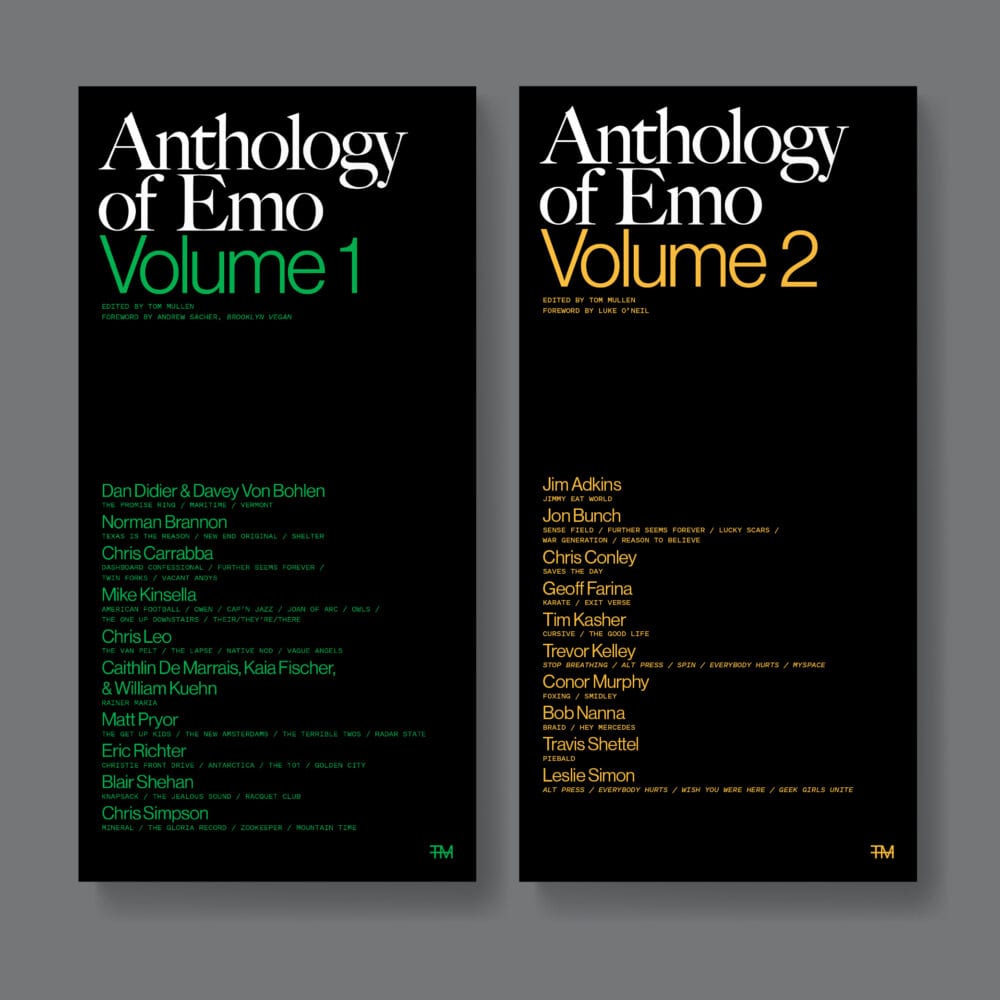 As I brought my questioning back to the book, I found myself really impressed with how Tom phrased things. It wasn’t some kind of “hard sell”, it was a man describing something he worked on and was incredibly passionate about. Who can’t respect that? “This is not a history book. This is just interviews from a podcast transcribed in a book form because I thought it’d be cool. It worked the first time and I’m trying it a second time, so I think it’s, it’s very, very, very, very simple. These stories are, it’s interesting to edit for audio, and edit for text. I’ve actually been really enjoying the difference because I’ve been editing audio for years, and I can almost edit as I’m talking with someone, I can already tell what I’m going to be editing, or what I’m going to be removing or moving around or whatever. And the same thing when I start reading it, I’m like, “Oh right, I remember that, this is going to sound cooler if I edit it this way”. It’s really, really fun, because I think everybody reads differently and everybody listens differently, so I think there’s a way to take something from both mediums.”

The Anthology of Emo Volume 2 is available for pre-order now and will be published in September.