This week we’re just playing The Darkside Detective, a fun point-and-click adventure game that won’t tax your brain too much, and Call of Juarez, a first person shooter that originally came out way back in 2006.

The moon, full again as always, loomed over me like a burden. I had compiled one too many games after another late night prowling the eShop for hot deals and discounts. Among all the rabble, deep in my backlog was The Darkside Detective. I was looking for a short fix and I heard this pixelated oddity was right up my alley.

The graphics for this game are of the “retro-inspired” variety. It’s easy to see why indie companies rely on this aesthetic. It’s quicker and easier to make a game with a simpler art style. However, this look fits The Darkside Detective perfectly, as this is an old school point-and-click adventure game, and should resemble the old Sierra games such as King’s Quest and Space Quest.

The game is easy. Very easy. If you pick up an object, you will use that object, and when that object ceases to be useful, it will helpfully vanish from your inventory. Click on everything. Exhaust all conversation trees. Try to combine things. Try things on other things, or people (based on obvious context clues). Solve a weird Professor Layton style puzzle. Case Closed. On to the next one!

The first case is basically Baby’s First Point and Click Adventure. You wander a very small house searching for a missing child. You play as Detective Francis McQueen, who works in the Darkside Division, solving cases of the unnatural variety. He is joined by his sidekick, Officer Dooley, a mercurial figure, who never ceases to surprise you.

McQueen is obviously inspired by Twin Peaks‘ Agent Cooper, but outside of the obvious reference to pie and coffee, it’s mostly just his look that is similar. Dooley could most-easily be compared to Andy Brennan. He’s a man who is odd and strange, but also has more going on than meets the eye.

The humor and story is what will keep you going through the game’s nine cases. The pop culture references are aimed right at the core audience, with references to The X-Files, Doctor Who, and even Mallrats. The Purple Tentacle, from Maniac Mansion, makes an appearance in one level.

There is a large amount of fourth wall breaking happening as well. Not to mention referencing the usual tropes of point-and-click games, such as the nuisance of having to dig through every barrel of trash you see.

I managed the beat the game’s six main cases over the course of a few short playthroughs. There are three more cases that can be unlocked, either by completing the Don of the Dead case, or by simply going to the game’s menu and unlocking them. I’m currently playing the first, Christmas-themed bonus case: Buy Hard, which takes place in a mall during the holidays.

While the game won’t offer much in the way of a challenge, it’s a great gateway game to get young people interested in the genre. Plus, the art style is simple yet effective, and the story is charming. I recommend it.

This week I was actually able to focus on a few different games. The first one was Feast Your Eyes: Little Marshmallow. It’s the latest title from Yai Gameworks, and acts as a sort of continuation/spinoff to their cult hit Close Your Eyes, which ranks high among my favorite indie games. Feast Your Eyes: Little Marshmallow sees players once again entering the adorably murderous shoes of the Marshmallow Monk as they navigate twisted corridors of their own past. Since there’s only 1 act available (as of this writing, act 2 is not out yet, but is supposed to be release the 21st, which means by the time you’re reading this article, it should be live), it’s fairly short. My playthrough of act 1 took me roughly a half hour, but, as is always the case with this developer, what’s here is a perplexing, mysterious, perverse, and deeply disturbing tale filled with uniquely bizarre nightmarish imagery. It’s tough to recommend at this very moment, but it seems the developer is working hard on getting the future acts released ASAP, and as always, buying the dirt cheap game goes towards supporting them. It’s more of what I love about Yai Gameworks despite its length, and I’m excited to see what comes next.

The other game I managed to focus on was the original Call of Juarez. Earlier this year I played through Gunslinger, the latest installment in the series, and I absolutely adored it, so I wanted to go back to the beginning and see how the series has developed over time. Given that this is a game from 2006, and was developed by the then-independent Techland, there are definitely a whole hell of a lot of rough edges and parts that simply don’t play very well. The graphics look dated even for the time the game released, and environments, though often expansive, look similarly weak. There are platforming sections, which are pretty much never welcome in first person games, and they feel clunky as all hell in the modern day.

But I think the game is still enjoyable if you can look past those problems, which can admittedly be tough to do. There’s a pretty strong narrative at play here, and it was kind of an early attempt at the linear, scripted action games that became all the rage in the late 2000s/early 2010s. You play as two different characters; Billie Candle, a half Mexican young man who is wrongfully accused of murdering his mother and stepfather and is now on the run from the law; and Ray McCall, an aging preacher with a violent past that is hunting Billie down since his stepfather was Ray’s brother. Each chapter shifts who you play as, and seeing the story from two perspectives does a good job of driving home the tale’s themes of redemption and discrimination. The voice work for each person is solid too, particularly in Ray’s case.

Each character plays differently, with Billie being a sneaky killer who can wield a bow and climb trees using his whip, while Ray is the guns out, shoot first and ask questions never archetypal cowboy. While the combat doesn’t feel too different between the two, it’s still distinct enough to make each character feel unique. Billie’s bow is extremely powerful, which is just as well since he dies in just a few hits. Meanwhile, Ray can enter bullet time and take precise shots with his pistols to help him overcome the odds. While Ray is undoubtedly the more enjoyable of the two to play as, it’s still interesting enough to help break up the pacing.

The final thing I’d like to say about the original Call of Juarez is that it has one hell of a protagonist in the form of Ray McCall. He has a bloodstained past that’s only somewhat hinted at (it’s apparently explored in the sequel/prequel, Bound by Blood), and his constant monologuing about the Lord’s will and his own righteous fury is extremely entertaining. Plus, in a completely pointless but low key brilliant creative decision, you can choose to make him hold a Bible in his right hand and a pistol in his left. If you try and pull the right trigger holding the Bible, he’ll say some quote that sounds cool. This is, to date, the only game I’ve ever played that has a Tactical Biblical Passage button, and you can gun enemies down while he spouts his righteous dialogue. It’s so stupid that it’s actually brilliant. 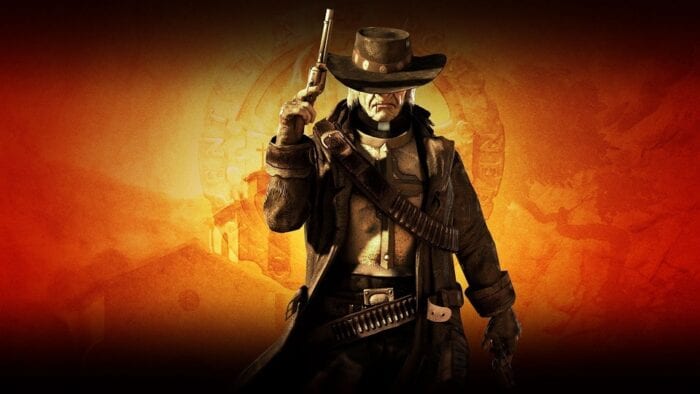 Anyways, despite how dated the game is, I had a very good time with it and am looking forward to playing Bound by Blood at some point in the near future.