When I’m not a staff writer and resident film critic here at 25YL, I’m a 19-year-veteran educator. That’s the day job while I moonlight with the press badge at film screenings and stay up late to write critiques after grading papers. As a lifer in this mission field, a movie like 1995’s Mr. Holland’s Opus is something of a worshiped idol. Ask any teacher, and you’ll hear the flood of feels when they speak of the movie. The drama from 1990s hitmaker Stephen Herek (Bill & Ted’s Excellent Adventure, The Mighty Ducks) hits them all and challenges Peter Weir’s Robin Williams vehicle Dead Poets Society as the greatest teacher movie of all time.

Each time I watch Mr. Holland’s Opus, I marvel at three particular traits: its depiction of the profession, how it stands as a history lesson for multiple perspectives, and that tissue-destroying swan song of an ending reel. Sure, it’s an idealist and grandiose Hollywood creation, but 25 years later, make no mistake: There are still generations of teachers who want to lead, make a difference, and go out like Glenn Holland. There are real-life versions of these kinds of local institutional legends all over the country who root their careers in one place, with multiple success stories beyond the classroom to show for it.

After spending his youthful years chasing a musician’s dream of gigs and fame, the married 30-year-old Glenn Holland (Richard Dreyfuss, earning every bit of the Best Actor Oscar nomination he received for this movie) settles for the fallback position of becoming a music teacher in a Portland public school in 1965. Supported by his stalwart principal (Olympia Dukakis, in a plum part) and the chummy P.E. teacher (Jay Thomas), and opposed by the square assistant principal (William H. Macy), Glenn initially finds more regret and disdain for his position than inspiration. Just as The Hangover jokes about dentists not being equal with other doctors, he finds himself on the lower peg as an arts teacher. That lack of full respect only increases Glenn’s frustration at the fact that he would rather be composing his symphony than correcting woodwind squeaks and sending sleepy kids to detention. 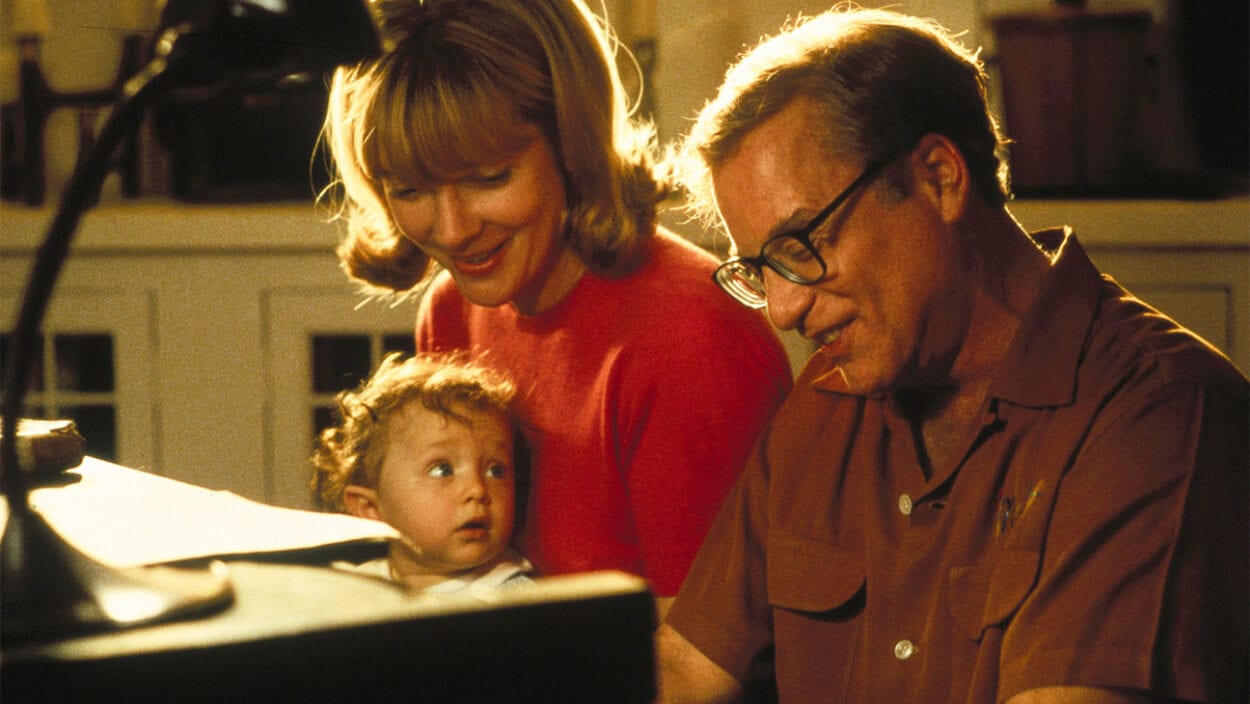 Let me tell you: That attitudinal adversity seen in the movie is far from fictional. It’s worse today than it was in the 1960s, but approximately 50% of new teachers today leave teaching in the first five years. To borrow a modern saying, the struggle is real. Stories then and now tell of teachers taking second jobs or needing a second income from a spouse to live above the poverty line and raise a family. Glenn Holland jumps on summer work teaching driver education for some extra scratch beside his dedicated wife Iris (the late Glenne Headly). That financial stress grows when Glenn and Iris become parents to a severely deaf son, Cole.

A music teacher’s day doesn’t end with the dismissal bell. There are orchestras, bands, and performances to lead and coordinate. Before curtains open each time, tedious practices and rehearsals fill extra hours. It is in these duties over the years that Glenn Holland finds a double-edged sword. On the helpful side, he fosters special cases of struggling students (a who’s who of Alicia Witt, Terrence Howard, Balthazar Getty, and others) with dedication and meaningful relationship-building (other that one extremely cringy, borderline-crush chapter embodied by Jean Louisa Kelly’s Rowena, which has not aged well). The harmful side is that the hours poured into his dueling passions of music and teaching pull him away from his family at home, particularly his disappointed teenage son.

Glenn’s realization and evolution toward correcting that wrong in 1980 creates a warm and gooey center for Mr. Holland’s Opus. The positive treatment of special needs is remarkably admirable. The parental plight within those challenges was a lovely performance turn for Dreyfuss and Headly, peaking with a visual light concert and sign-language-enhanced rendition of John Lennon’s “Beautiful Boy” and the touching family embraces that follow. Moments like that also celebrate the importance of the arts and the blend of popular and traditional music in a solid, well-rounded educational experience.

Written by Vietnam War veteran screenwriter Patrick Sheane Duncan (Courage Under Fire) and edited by Trudy Ship (The Pelican Brief), the historical jumps are presented in musical interludes of shifting tastes and snippets of archival footage. The effect is very Forrest Gump Lite a year after that Oscar champion. Out from around the popcorn, what my teacher’s eye sees are the changes in education from lesson plans and discipline to classroom best practices. Sitting here now in 2020, as classrooms (like my own) are beginning to reopen amid virtual futures previously undreamed of, Mr. Holland’s Opus stands as a double time capsule.

The movie’s passage of time shows its own arc in how society and schools change in the three decades from 1965 to 1995. Little bits of everything swerve for Glenn at his renamed John F. Kennedy High School, from the relaxation and acceptance of rock-and-roll in times of war and shifting gender roles to the advent of computers and the marginalizing budget cuts of the arts that trigger his early retirement. The man saw a great deal, and I, for one, know how that feels.

My rookie teaching year after college was in the fall of 2001, and 9/11 happened during my second week on the job. Imagine that. The 19 years since have given me a graybeard, and the old dog has learned new tricks as a newly minted technology coordinator in this brand-new and uncertain landscape of digital learning. Just as Mr. Holland’s Opus made the 1960s look quaint, the quarter-century of computerized explosion since its release in 1995 has made the ’90s look ancient—and the film’s ’60s look downright barbaric. 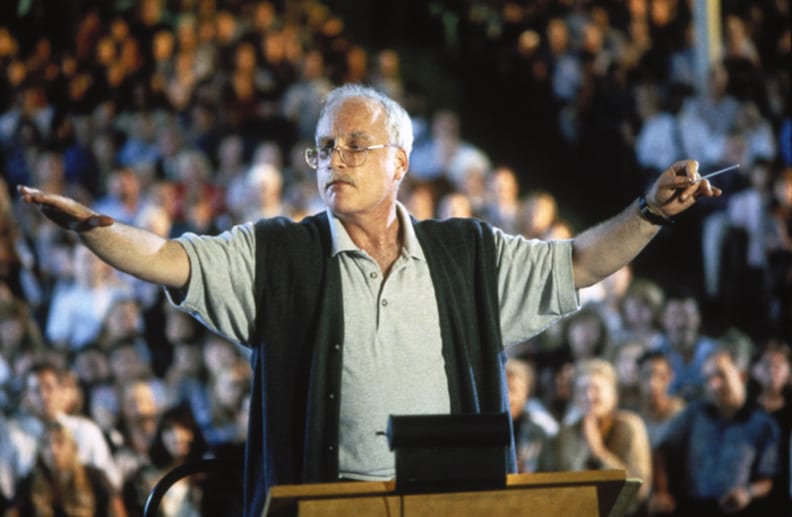 Where the true quaintness wins over in Mr. Holland’s Opus is in its long-revered happy ending. There isn’t a dry eye in the house or on camera when 30 years of hard work and influence culminate in the school’s concert sendoff for their beloved old-salt teacher. Composer Michael Kamen’s music and that surging “An American Symphony” telegraph the beauty and honor of the enormous moment. The music is wonderful, outward gratitude, but it’s the gesture of even being there that matters most. Teachers think, create, and listen. To see years of students come back to do the same is astonishing, creating one of the most satisfying movie endings in history.

Every teacher in America dreams of a sunset moment like that of Glenn Holland. So few ever get or earn it. After several years as a bit of an education gypsy working at various positions and in various settings as an elementary and middle school teacher before this new tech job, the No. 1 occupational hazard is constant doubt. Students come and go, and the years blur together. You never know you do well until someone says you did, and funerals are too late to say that.

No teacher is expendable, yet the tumultuous nature and climate of that career snuff out too many Glenn Holland types in reality, away from movies. Dukakis’ Principal Jacobs symbolizes the strength of a good teacher with her gift of a compass to Glenn in her retirement years, which influences the years leading up to his own. Good teachers reach and teach more than good content, no matter the era. They point students in the right direction only when they too have the right bearing. As it was eloquently said during the retirement speech, a teacher’s life’s work is the collection of people they impact. Romanticized as it is, Mr. Holland’s Opus makes all the sacrifices feel worth it.