This week Collin plays Call of Juarez: Bound in Blood, as well as Oxenfree, our Indie Game of the Week. Meanwhile, Johnny works his way through Super Smash Bros. Ultimate‘s story mode World of Light, and talks about the benefits of unlocking the content hidden inside.

This week, as always, I bounced around between several different titles. In addition to playing a few more hours of Dragon Quest XI, I was able to play through and beat Call of Juarez: Bound in Blood, the second game in the series. It was definitely a straight up upgrade from the first game, at least from a mechanics standpoint. There wasn’t really any first person platforming to worry about, with all the stealth and platforming from the first game being replaced by non-stop action. Story wise, it’s a prequel to the original game, and lets you play as one of two McCall brothers as they go from disgraced Confederate soldiers to blood thirsty treasure hunters.

Ray returns as one of the brothers, and plays similarly as in the first game. He can dual wield pistols, specializes in close quarters combat with shotguns, and can also throw dynamite. His Concentration ability allows him to mark enemies manually before unloading on them, very similarly to Red Dead Redemption, which released shortly after Bound in Blood. Thomas is the more agile of the two, able to climb up to certain vantage points and use rifles for pin point accuracy, as well as uber-cool throwing knives for when he’s in a tight spot. His Concentration ability lets him automatically target enemy’s hearts, and you have to hold the fire button and pull back on the mouse in order to mimic him fanning his pistol’s hammer. This is never not awesome. 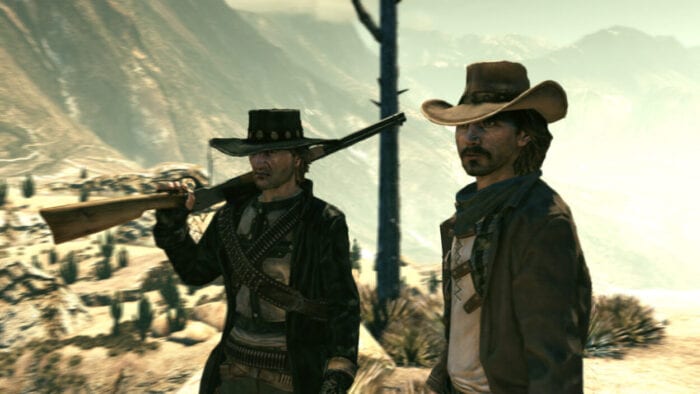 Even though there’s a confusing lack of co-op, friendly AI is actually petty robust, with them feeling like a real asset instead of a burden, which helps reinforce the bond both brothers share. Even though it does suffer from prequelitis in that you pretty much know where it’s going to end, it’s still a really good time. I quite enjoyed this entry, and now I need to decide whether or not to take on Call of Juarez: The Cartel, the much-maligned modern day entry from 2011.

The other big game I played this week was Oxenfree, an indie adventure title from Night School Studio. This one has been sitting in my backlog for a while now, and I only knew the vaguest of information about it going in, so I decided to give it a whirl—and now I’m in love. Oxenfree follows Alex, and her new step brother, Jonas, as they travel by ferry to Edwards Island to party with a few other teenagers. It isn’t long before they discover radio frequencies that don’t exist in a cave, and are swept up in a supernatural mystery involving time loops and ghosts.

Oxenfree’s greatest asset is its script and voice acting. Teenagers are notoriously difficult to write, which makes it special when someone is able to nail their speech patterns. Every one of the characters in the game feels like a real teenager, right down to the stutters and awkwardness that often rears its ugly head in conversation. Even when you’re not exploring the island trying to piece together the mystery, it’s a downright pleasure to listen to these characters interact with one another, thanks in no small part to the naturalistic voice acting from the cast. It’s almost mumblecore, but comes across as genuine, and rather than falling into the twee “I learned so much in that moment” tropes of lesser coming of age stories, Oxenfree instead presents its characters as if you were a fly on the wall listening in.

Meanwhile, the core mystery is very compelling, and the atmosphere of the game is spooky. I wouldn’t outright call this a horror title—so far, there have been no jump scares and the mood is one more of melancholy and bitterness than fear and dread. Nonetheless, the tone the game strikes feels perfect for this type of coming of age story. It doesn’t over sentimentalize anything, but it also deals with some very grounded subject matter despite the supernatural trappings of the plot. In other words, I’m completely, 100% hooked, and I’m looking forward to making my way through the rest of the story.

Since I’ve been making my way through Super Smash Bros. Ultimate‘s story mode World of Light, I haven’t been playing much else. I always become engrossed in Smash Bros. games until I suddenly (and without warning) lose interest. At the moment, I have no desire to stop and am fully locked into “Gotta Collect ‘Em All” mode.

Going through the story mode, you are able to acquire spirits that are often far too expensive to purchase when you are someone that doesn’t battle online (in my case, due to a less-than-robust internet connection).

I also like that you can unlock shops in story mode, where you can purchase items with SP in lieu of coins, and training centers where you can level up your characters while you spend you time doing more interesting things. This aspect of the game gives the player a substantial and tangible reward for playing through this mode. You are no longer left with the standard shop where you must plunk down serious coin in order to get one good spirit. You don’t have to earn (and then immediately spend) SP and Snacks powering up your spirits. Instead, you can send four spirits off on an expedition and go back to collect your reward once they’re done. With so many spirits available in the game (I recently broke 500) this cuts down on the boring busy work required to max out all your spirits.

I’ve pretty much unlocked most of the map in World of Light, and I’ve still got a whole bunch of Legend-level spirits to unlock. Using spirits in battle is essential, and while it was confusing as hell to me initially, I now know the importance of using the right spirits for certain battles.

For example, in World of Light, several battles will have set conditions at the start. Some will have strong wind conditions, while others will have floors that are ice, lava, or poison. If you have certain spirits, you can negate these conditions. This is—at times—essential to victory.

The battle to unlock Cranky Kong has a floor that causes you to fall asleep. Without a spirit to counteract this, you will spend 99% of your time snoozing on the ground while Donkey Kong slaps you around like a pair of bongos. However, if you explore the world map, you will eventually find a spirit that will help you overcome this handicap.

You’re free to explore the World of Light in whatever order you choose, so sometimes you’ll be totally outmatched, while other times you’ll be able to win a battle in under 10 seconds. The fun part is getting smoked by an enemy, reconfiguring your spirit party, and going back to outwit the enemy. The strategy of trying out different spirits to assist your fighter is fun (to me), and once I got the hang of the myriad rules involved, I felt like I was mastering the process instead of just allowing the game to choose the best options for me (which is something you can also do, although the game usually sticks to a small pool of choices).

I’m not a big fighting game fan, although I played my fair share of Mortal Kombat with my friends in college (back in the late 90s), but Smash has always hooked me in. The way the game (mostly) stays faithful to the move set of each character, and the game they originate from, allows me to understand their specific controls better than other games of that ilk.

Also, for people who haven’t played in a while, there is an upcoming event where you can unlock three new spirits based off Paper Mario: The Origami King. I’m nowhere near the end of collecting all the spirits myself, but for you completionists out there, Nintendo has some new helpers for you to snap up.