The Marvel franchise is a vast and interconnected universe with over 20 films and featuring two spy-centric ABC television series: Agents of S.H.I.E.L.D. and Agent Carter. (ABC also aired the much-maligned Inhumans for one brief season.) While Agents of S.H.I.E.L.D. recently wrapped up after seven seasons, Peggy Carter’s adventures sadly sputtered out after just two seasons. Yes, the Russo Brothers tied up her story with Steve Rogers at the close of Avengers: Endgame (which pleased and upset fans alike), but part of the joy of her own series is we as the audience got to delve deeper into her backstory, sans Steve. If you missed Agent Carter in its initial run on ABC, it’s now available over on Disney+.

A Woman Stuck in the Wrong Time

Much like when Captain America wakes up in the present day at the end of Captain America: The First Avenger, Peggy Carter (played by the fantastic Hayley Atwell) feels ahead of her time. This often means she’s overlooked by her contemporaries and doesn’t get the credit for the work she deserves (with male coworkers often basking in accolades). The first season of Agent Carter opens with Peggy working for the Strategic Scientific Reserve (SSR), but in her spare time, she’s moonlighting with Howard Stark—you know, Tony Stark/Iron Man’s father—to figure out who’s framed him for selling weapons to the country’s enemies. By Season 2, she’s jet-set over to sunny Los Angeles to learn more about the inner workings of the Secret Empire. All this backstory serves a pulpy path to her forming S.H.I.E.L.D. years later.

No matter the mission, Peggy Carter is resourceful, witty, and fierce—a mere fashion plate she is not (although we’ll get to the fashion in a bit, I promise). Whether she’s scoping out a dangerous shoot out with her compact mirror or beating someone senseless with a stapler, she’s handy, with or without a weapon.

It also helps to have backup, and Peggy has an unlikely crew at her disposal, which includes Stark’s butler Edwin Jarvis (played to perfection by James D’Arcy) and fellow SSR agent and disabled war veteran Daniel Sousa (the wonderful Enver Gjokaj, who ended up reprising his role on Agents of S.H.I.E.L.D.). 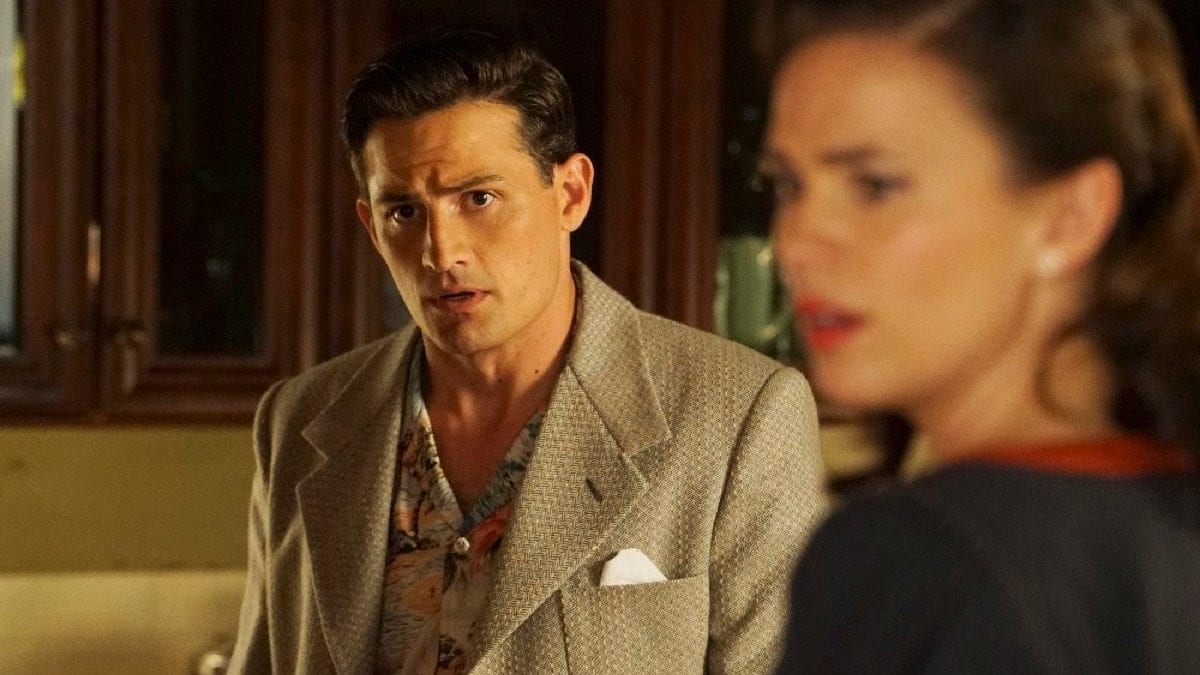 Carter and Jarvis carry on like a house on fire and much of their banter feels like it’s pulled straight from a 1940s comedy, à la Bringing Up Baby. Jarvis is absolutely the man you want in your corner, whether you need a getaway driver, a hanky, a spot of tea, or combat training. While his main job is to soothe and make life easier, he’s not one to suffer fools either. There were so many great callback moments in Avengers: Endgame, but the best was seeing Jarvis again right after Steve sees Peggy when he and Tony time travel to the 1970s. (I may or may not have yelled when I saw it in the theater. I’m not sorry.)

Sousa is another interesting character because, before Endgame, he’s the guy we assumed Peggy ends up with. After falling in love with a super-soldier, it may seem unlikely (at least on the surface) that Sousa becomes Peggy’s love interest. He’s got a bad leg and often uses a cane. He, too, is overlooked due to his physical limitations, but he’s intelligent and caring. These are the same qualities that Steve had all along, and when Steve finds himself in Peggy’s S.H.I.E.L.D. office in Endgame, it’s the picture of pre-serum Steve she keeps on her desk. It’s what’s on the inside that counts. 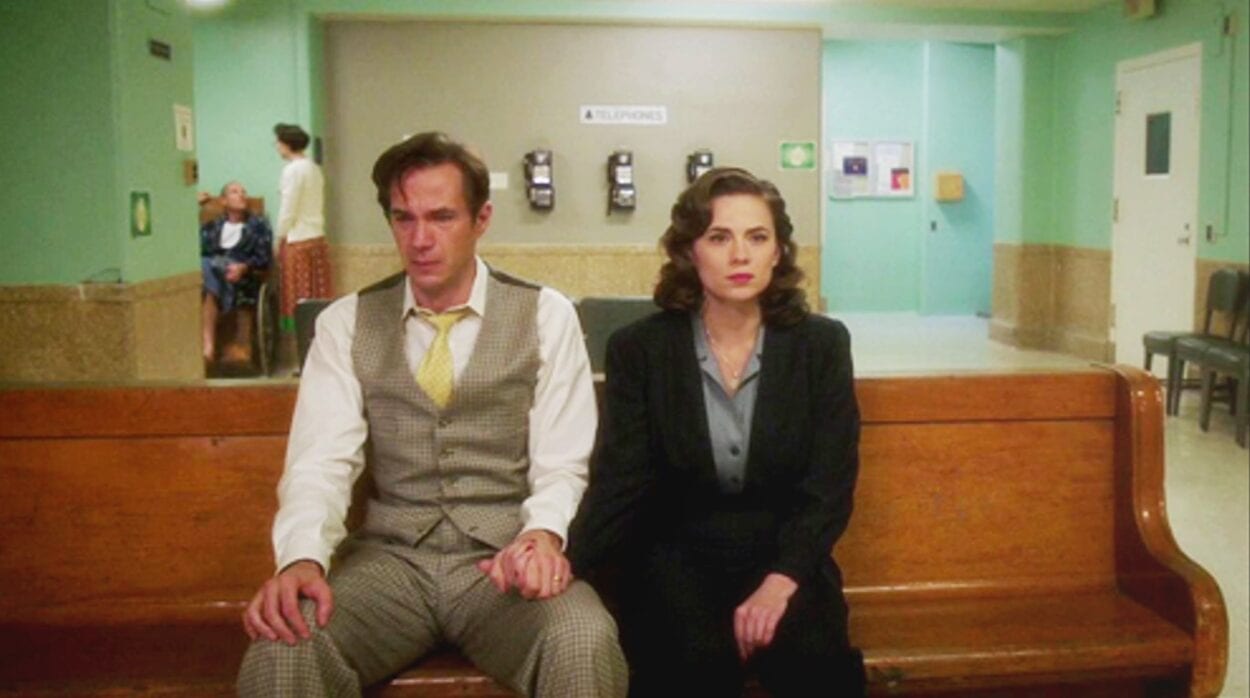 Peggy’s loss of Captain America colors much of the first season of Agent Carter, which brings me to another important point: while this is a period piece of sorts, the show often deals with more modern topics. Peggy has to fully process her grief over losing Steve to keep the rest of the world safe (and discarding a vial of his blood). Later on in Season 2 when we meet Jarvis’s wife, Ana, the subject of infertility is touched on at length and with great care and emotion. There’s also the odd Russian spy who’s infatuated with Peggy, bordering on obsession, but I really shouldn’t give away all the storylines, now should I?

Modern-day comic book heroes have suits of impenetrable sci-fi armor, so what does Agent Carter have? Stylish AF suits and dresses, that’s what. From the first frame she enters, this show is as much about the clothes as it is the plot. Giovanna Ottobre-Melton’s technicolor designs have become iconic for Peggy fans and cosplayers alike. From her striking red Stetson that makes her literally stand out in a crowd of sepia-suited men to the jewel-toned greens, blues, and purples that appear in dresses and pantsuits, Agent Carter might be one of the most fashionable comic book pieces of all time, giving the likes of Dick Tracy a run for his money (and his wristwatch). Considering much of her time on screen in the Marvel films had her looking glamorous, the show gave Atwell the opportunity to show off her combat skills, and seeing her switch it up with suits just added to the kick-ass girl power appeal. 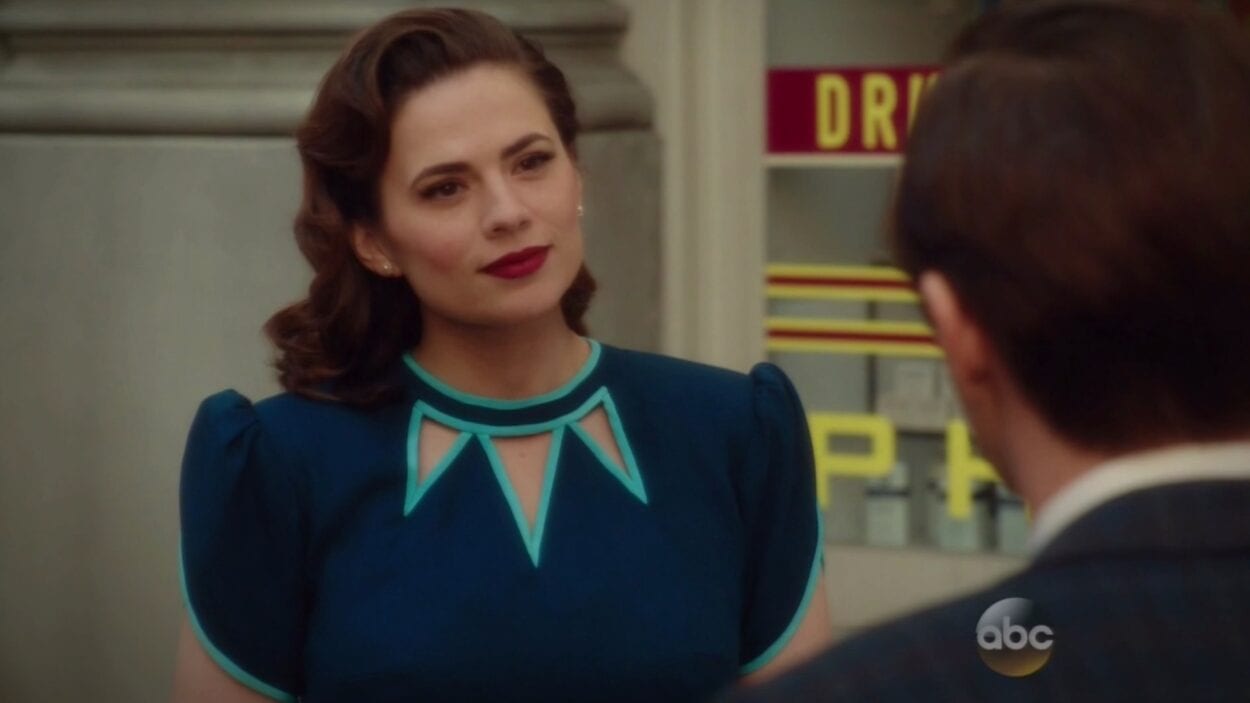 Nevermind the fact that Besame Cosmetics was able to launch an entire makeup line based on Peggy’s look (the lipstick lives on and is one of the best reds I’ve ever purchased), which made cosplayers and retro fashionistas rejoice and empty their pocketbooks. Although, in Peggy’s case, lipstick isn’t just for outward appearance, but can provide a deadly knockout if it’s the Sweet Dreams formula (which even she falls prey to). In short, Peggy Carter’s wardrobe has it all, from fashion to function.

Despite all this—the clothes, the spy gear, the unlikely squad—it’s Peggy’s belief in herself that keeps me coming back to this show and makes me wish we could have more and really see how S.H.I.E.L.D. was founded. Sure, she got a so-called happy ending with Captain America, but it’s those moments in between and without him that make the conclusion that much more satisfying (at least, for me). Peggy Carter always knew her value, and while she doesn’t care if others don’t see it, I wish others (Marvel and Disney included) would take a second look at Agent Carter.