There is a lot of good noisy music coming out of the UK lately. It often happens that way; when the world is in turmoil, the greatest music and lyrics are projected from the fears, frustrations and fury of the disenfranchised. IDLES lead the pack with their perfectly poignant lyrics and thundering choruses, and it is because of IDLES that today I am here talking about a band called DITZ.

During lockdown, IDLES have been entertaining their fans online on pretty much a weekly basis. From the “Mr Motivator” video being recorded by and featuring their fans at home exercising and dancing to their song, to Balley TV hosted by Joe Talbot with some brilliant guests. Plus five days worth of interviews with the band live on Zoom in the AF GANG (a Facebook group created by their fans with whom they have a close relationship). The interviews were fabulous and their host, Brian Mimpress, turned out to be a natural at playing Michael Parkinson from the comfort of his own (goth) kitchen.

Off the back of the IDLES interviews, Tales from the Goth Kitchen was borne, with more bands coming on to chat to Brian. This is where I heard about DITZ. Learning that they were going to be the next Goth Kitchen guests, I thought I should check them out. 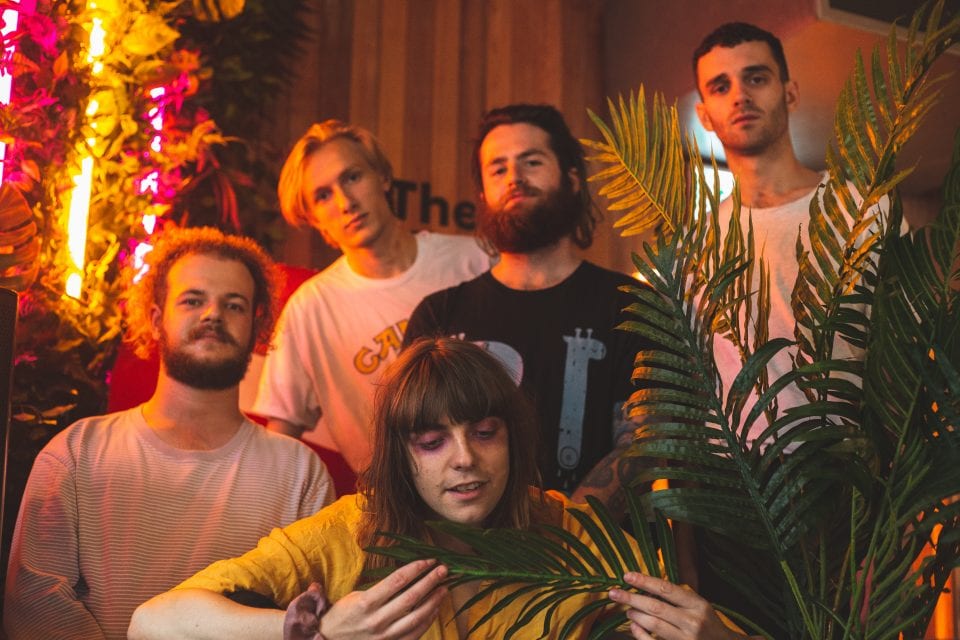 There have been four times in my life that I remember clearly being stopped in my tracks by a piece of music. The first was in Spillers Records, Cardiff when I heard The Strokes’ Modern Age EP and snapped it up immediately. The second was while I was browsing HMV in Lichfield when I heard At The Drive-In’s Relationship of Command playing in the store. I asked the guy on the counter who was playing and bought the album right there and then, and then listened to it on repeat for months. Next was while I was driving and Steve Lamacq played IDLES’ “Stendhal Syndrome”. I downloaded the album when I got to work and became immediately obsessed. The fourth time was when I listened to DITZ for the first time a couple of weeks ago. I had to put the laptop down, stop, listen and just take it all in. I have played all their songs every day since then. I might have a problem. God knows what I’ll be like when they have a full album.

It felt like I’d just stumbled across the music world’s greatest secret and I was very excited to tell everyone about them because secrets like this just shouldn’t be kept. So, that’s what I’m doing right now. DITZ is a Brighton-based five-piece band, with Callum on vocals, Jack, (who was formerly the drummer) on guitar, Anton on guitar, Caleb on bass and Sam on drums. Formed in 2016, they have released two EP’s so far. EP1 is available digitally only, but on July 3rd this year, their 5 Songs EP was released on limited edition vinyl and digitally via Alcopop! Records.

DITZ themselves recorded and produced EP1 and the sound is raw, gritty and loud—I fell in love at first listen. While their sound is unique, it feels like all my favourite bands from the ’90s; Shellac, Fugazi, Nirvana, and some of my more recent faves, Metz and Girl Band, got together and made the most beautiful, strange child. The three-track EP opens with “I am Chris Martin” storming out of the gate with a massive riff. Of course, singer Callum is the total opposite of Chris Martin with no ego in sight, yet is still an excellent front person, with a swagger that I doubt they even know they have.

The aptly named “Two” is next up. This song started life as an instrumental demo that was created after listening to “Thumbscrews” by The Jesus Lizard 10 times in a row. It’s the most tenacious track of the EP, and I bet it kicks ass live. The final track of EP1 is my favourite, “No Thanks I’m Full”, named after a line in the Peep Show paintball episode. If that alone isn’t enough to make you love them, well, I’m not sure I want to be your friend anyway.

The 5 Songs EP takes their noise rock to a new level. DITZ are not ones to conform to any scene in sound or personality; they also challenge societal attitudes and issues faced by the LGBTQ+ community such as bigotry and homophobia. All five tracks were singles which were not released physically; in fact, 5 Songs is the first DITZ release you can buy and hold. Check out their Bandcamp page.to spend your money.

Every track on this EP is absolutely brilliant, all of them are earworms, and I cannot stop listening to it; just like At The Drive-In, The Strokes and IDLES before them. I hope my spidey-senses are working for this band too as they deserve to be big. Or at least big-underground.

The opener, “Seeking Arrangement”, clocks in at just one minute and thirty-seven seconds and creeps in with a sinister stripped-back and haunting verse of short, sharp jolts of sound. Then, from out of nowhere, it explodes into a chorus that thrashes and burns. Honestly, I could picture Kurt Cobain singing this back in the early Nirvana Bleach days. Callum’s voice changes from an almost Gary Newman-esque snarl to this release of anger, holding absolutely nothing back before smoothly transitioning back into the more minimalist verses.

Released in November 2019, “Total 90” addresses everyday homophobia and inequality. Panini Cheapskates illustrated the single release, a duo who famously ‘draw’ football cards badly, and the video featured a match at a football ground between the band (in rainbow coloured kit) and members of FUR and Slaves who are acting out in the stereotypical ‘male’ way that society dictates footballers should. A warlike drum rhythm, which reminds me so much of the intro to Shellac’s “The Crow”, dominates Cal’s spoken vocal, lines like “your eyes undress, the mouths to be fed” giving the track an ominous feel before it progresses through punk to a thrashed out crescendo. Cal’s repeating of “Your eyes, your eyes, your eyes” is incredibly sexy to me, though that is not the intention at all. Sorry Cal, it’s your voice; it does something to me.

On newest single “Role Model” Cal uses almost whispered throaty vocals and down-tuned chords to rattle you, then the sound hits you like one of the high rise buildings in the video smacking you across the face. Cal explained to BackSeatMafia.com that “Role Model” is about peer envy, “It’s a horrible trait that stops you from being happy for other people and leaves you with a skewed perspective of what you’re making and its original goals. Sitting back from what you’ve made is the only way to see it the way you’ve intended.”

Meanwhile final track “F*ck The Pain Away” is an impressive cover of Peaches’ song. If you’ve heard the original, you will wonder if it can be done justice, but DITZ totally make it their own. If you didn’t know it was a cover, you’d likely think they’d written it themselves.

Like IDLES, who they supported on tour, the content is deep, personal and full of sarcasm. If their message doesn’t resonate with you, their approach probably will. Direct and unapologetic as they are, DITZ is not your typical punk band. You won’t find predictable power chords or obnoxious whining here. Instead, there are screeching guitars, thrashed out beats and stop-start rhythms, but despite all that the songs are really catchy.

DITZ live shows areq known to be chaotic and unpredictable events—vivid experiences that you will always remember, for better or worse. It gives me enormous pleasure then to learn that they will be joint headlining a January/February 2021 tour with the Manchester band, False Advertising. Tickets go on sale at 10 am on Friday 4th September. I cannot wait to experience them in the flesh as I thinks it’s fair to say that I am officially addicted to DITZ.

To learn more about DITZ and see Cal and Jack interviewed in the Goth Kitchen, check this out: