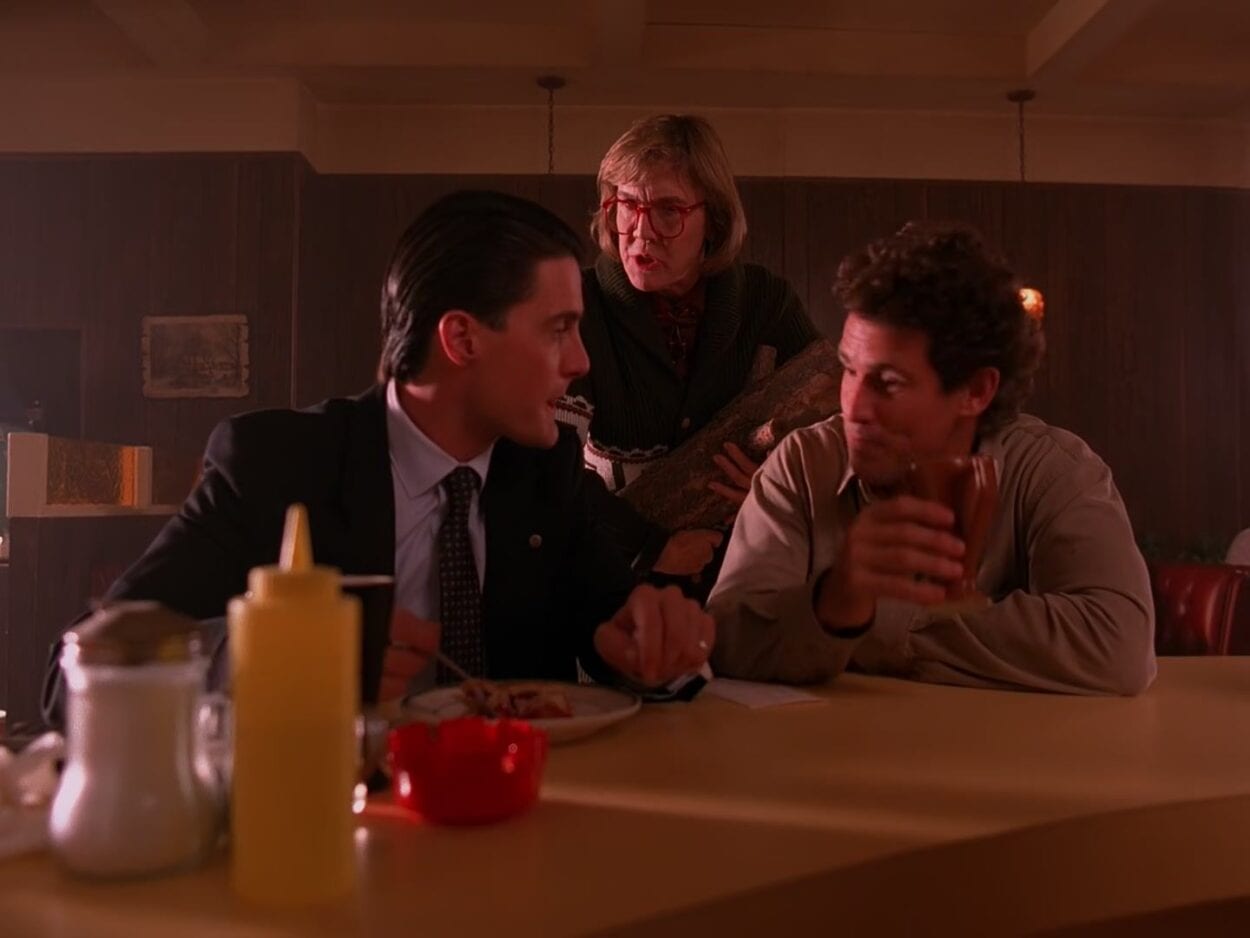 Twin Peaks is the smallest of all the small towns on this list, with a population of just 5,120 (though due to a behind-the-scenes disagreement, explained in-universe as a simple error, it was originally listed as 51,201 on the “Welcome to Twin Peaks” sign). It definitely feels small—this is truly a town where everyone knows everyone, and where your choices for amenities and entertainment are limited to a handful of mom-and-pop-type establishments. This can be a good or a bad thing. While some might feel stifled by the lack of opportunities, and by everyone poking their noses into everyone else’s business, others are charmed by the feeling of community and the unique appeal of the town.

Dale Cooper is certainly charmed by it. As an audience, we see the town through his eyes as he discovers its people and places, and we share in his delight at how quaint, cozy, and eccentric it all is. The Double R Diner is the center of Twin Peaks life, which might sound boring if the warmth and humanity of its waitresses and the divine qualities of its pie and coffee weren’t impressed upon us so firmly. As for nightlife, pretty much the only option is the Roadhouse. Luckily, it’s much cooler than a bar in such a tiny, random town has any right to be, with perfect lighting and ambience every night, and musical acts to match. The fact that the Roadhouse inexplicably got Nine Inch Nails to play there is just part of its otherworldly charm, as is its showcasing of wonderfully ethereal singers like Julee Cruise.

The web of connections between the town’s residents is highlighted by Laura Palmer’s death. We see the positives and the negatives of a community where everyone’s lives are intertwined—so many people were affected by Laura and turn to each other to mourn her, yet so many also contributed to the insidious darkness that engulfed her, and that runs throughout Twin Peaks. Whatever is good or bad in the town seems to spread out to eventually touch everyone. Beneath Twin Peaks’ idealized veneer lies murder, violence, rape, beatings, drugs, cheating, death, and a chilling supernatural evil. Are the great pies and the friendly locals worth all this? Perhaps this is what lies beneath the surface in all towns, and the pies are just a bonus.

Like so many great fictional towns, Twin Peaks has its fair share of both magnificent scenery and unusual residents. Its waterfalls, forests, and mountains are iconic amongst fans who dream of taking trips to the show’s filming locations. Also iconic are characters like the Log Lady, Pete Martell with his fish in the percolator, Nadine with her silent drape runners, and Andy doing just about anything.

Half-American and half-English, Natasha grew up in northern England, spent nine years in Los Angeles, California, but has recently returned to her hometown. She has always had a passion for writing and for television from both sides of the Atlantic. She especially loves Buffy the Vampire Slayer, Game of Thrones, Stranger Things and the Rocky Horror Picture Show. When she's not watching, talking or writing about TV, Natasha enjoys photography, going for walks, and hanging out with cute animals.