‘Philip Glass’ Music in Eight Parts: Minimalism Out of Time’ is now available on Audio, read by the author, Ryan Luciano, exclusively for our Patreon supporters. For just $3 a month you will have access to our full library of Audio content, plus three new uploads every week. To sign up visit our Patreon page: https://www.patreon.com/25YL

With an undeniably distinct sound and a body of work spanning everything from groundbreaking operas to chamber music to Oscar-nominated film scores, Philip Glass is one of the world’s best-known living composers. Because of his mainstream popularity, he is probably the most commercially successful practitioner of a musical subgenre called minimalism. However, the recent rediscovery and recording of one of his early minimalist works, Music in Eight Parts, is a good reminder that he hasn’t truly composed minimalist music in almost 50 years.

Glass is always eager to point out that he is no longer a minimalist. “Well, I haven’t written any minimal music in twelve years,” he says in an early-1990s interview with fellow composer William Duckworth. “I don’t think ‘minimalism’ adequately describes it. I think it describes a very reductive, quasirepetitive [sic] style of the late sixties. But by 1975 or ‘76, everyone had begun to do something a little bit different” [1]. This response is echoed over twenty years later in his memoir, Words Without Music:

I’ve always thought of Einstein [on the Beach] as the end of a cycle of work that had begun with the highly reductive, repetitive music which characterized the early days of the compositions for my ensemble, a period that began in earnest in 1969 with Music in Fifths and Music in Similar Motion. […] The pieces that came afterward would represent a new chapter. […] With the next opera—Satyagraha—I would be on the threshold of a new body of work.

Glass’ views on minimalism aren’t just the complaints of someone that is annoyed by having his work generalized, and more often dismissed, by a term that implies a lack of substance—it’s also true that he largely hasn’t composed in a truly minimalist style since Einstein (1976). Even less-experienced listeners can note the radically different aims and tropes in Glass’ early minimalist works, such as the aforementioned Music in Fifths and Music in Similar Motion, and his later piano etudes, symphonies, and film scores. Music critic John Rockwell, writing not long after the shift in Glass’ work, describes fans who loved Glass’ “austere” early works, while feeling later works, embodied by Satyagraha, “softened his style beyond salvation” [2]. Similarly, critic Alex Ross recounts that “[i]n the early years Glass was as austere and severe as anyone. His amplified ensemble of winds and organs focused with almost maddening thoroughness” [3]. Contrast the music described in these statements with Glass’ much more melodically-and harmonically-focused later pieces, and listeners can hear how the differences in the eras of Glass’ work are reflective of a larger break in music between minimalism and postminimalism.

Music critic Kyle Gann is likely the most prolific theorist of minimal and postminimal musical aesthetics. In the early 2000s, Gann published a series of essays investigating minimalism and postminimalism for the website NewMusicBox. Gann identifies a steady beat, static harmony, repetition, and an audible structure resulting from a transformational process among the traits commonly found in minimalist compositions. Gann seems to give special priority to audible structure, stating that to him the thing that all of the “classic minimalist pieces shared was that their structure was right on the surface, that you could tell just from listening, often just from the first audition, what the overall process was.” Postminimalist works share most of these traits but are typically shorter and more melodic. Perhaps most importantly, postminimalist works usually obscure, weaken, or do away with the audible organizing processes and structures. 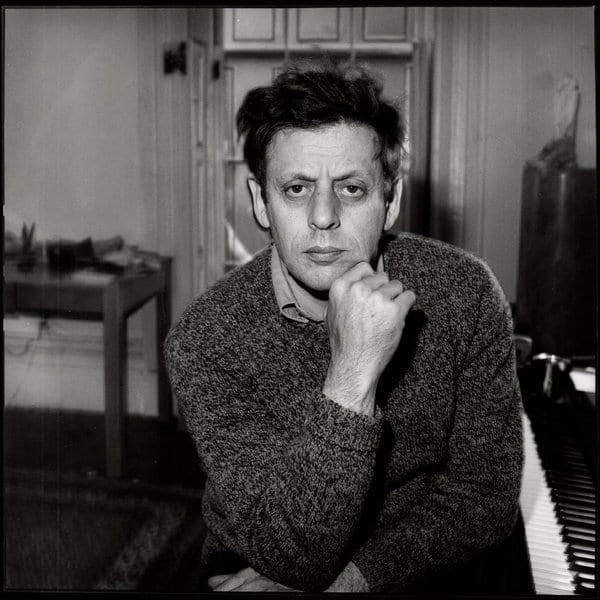 The idea of organizing music through audible processes can be traced back to a manifesto written by minimalist music’s other most prominent composer, Steve Reich, titled “Music as a Gradual Process.” In this essay, Reich stated that he was “interested in perceptible processes. I want to hear the process happening throughout the sounding music.” He eloquently relates the organizing processes to “pulling back a swing, releasing it, and observing it gradually come to rest” and “placing your feet in the sand by the ocean’s edge and watching, feeling, and listening to the waves gradually bury them.” Minimalist composers would abdicate a degree of compositional discretion through the audible process: they would set the process in motion—pulling back the swing—and let the process guide the piece from there.

Reich’s preferred method was through phase shifting, where a short melodic fragment is repeated on multiple instruments, one of which will subtly slow down until the fragment is out-of-sync with itself. Glass, inspired by his work in Indian classical music with Ravi Shankar, manifested the audible process through a system of additive and subtractive rhythmic processes. Two Pages (1968), which predates Music in Eight Parts, Music in Contrary Motion, and Music in Fifths by about a year, clearly illustrates the kind of additive processes Glass utilized during this time. The piece begins with a 5-note melody—stripped down to the point where it may be better described as a melodic pattern—which is repeated an open-ended number of times, progressing to patterns of 5+4, 5+4+3, and 5+4+3+2 notes, before reverting back to 5+4+3, 5+4, and finally 5 notes once again. The order in which they appear is fixed—for example, the 5-note pattern G-C-D-E-F becomes the 9-note (5+4) pattern G-C-D-E-F-G-C-D-E. After the process is exhausted, a new one starts, expands, reverses, and is eventually exhausted [4].

This leads me to Music in Eight Parts. The reconstruction of the piece, led by grad student Alex Gray, is a fascinating story in its own right. According to Gray, Music in Eight Parts was only performed a handful of times, to the point where the musicians that performed it didn’t remember what it sounded like—and in some cases didn’t even remember the work at all. It fell out of favor with Glass, who sold the score to raise funds after he began working on the large-scale Music in Twelve Parts (“Once we had Twelve Parts, we had no need to play Eight Parts,” Glass recalls). There were numerous issues with the reconstruction process: the Philip Glass Ensemble’s instrument lineup had changed over the years, and the score was written on a single sheet of paper in shorthand, with a page of a completely different work written on the back, with no indication that it was a different work. No one even knew how fast to play it until tape surfaced just days before the new recording, which revealed that the piece was originally played at less than half the speed as had been previously believed.

Music in Eight Parts has a lot in common with Glass’ other works of this period: its blaring, bare-bones melodic pattern perpetually churns, reflecting Rockwell’s and Ross’ characterizations of “austere” and “severe” early works. As with other pieces from this period. The melodic pattern is transformed through additive and subtractive processes. But there are some key differences as well. The slow tempo is abnormal in early Glass, with Gray identifying it as his first slow, minimalist work. Maybe the most important difference is that the additive process is less strictly adhered to than in similar works from this period, and it is more challenging for the listener to audibly identify the exact process that Glass is employing. In this way, while being a distinctly minimalist work, Eight Parts foreshadows Glass’ eventual shift to postminimalism.

One of the most intriguing things about the reconstruction and recording of Music in Eight Parts is that the choice was made to reflect more modern aesthetics and preferences. The decision to use the current instrumentation of the Philip Glass Ensemble for the recording was obviously a practical one; however, the decision to double the tempo at the 7:50 mark was an artistic one. The tempo change is not indicated in the shorthand score, and tempo changes were a rarity not only in Glass at the time but in minimalism as a whole. Eight Parts’ tempo change is exhilarating and pulse-pounding, but it also provides climactic energy that minimalism usually intentionally avoided. This energy is intensified at the 12:28 mark by the vocalist’s register change and the entrance of additional instruments. If the piece had a long recorded history, such choices might have been less notable, but as the first commercially-available recording of the work, these are obviously noteworthy choices. The work’s obscurity provides us with a unique opportunity to hear a minimalist work recorded with modern sensibilities, totally unencumbered by any previous history, almost as if it was newly composed instead of fifty years old.

In all, Music in Eight Parts is one of my favorite Glass recordings in years. The Philip Glass Ensemble’s energy, cohesion, and virtuosity are so fully on display that it’s impossible to tell that they recorded the work remotely due to the COVID-19 pandemic. It is a mesmerizing, infectious, and energetic work that didn’t deserve to be neglected for nearly half a century. It serves as an entertaining and accessible introduction to early Glass and minimalism, while still having some tricks up its sleeve that differentiates it from other works from the same era.

[4] For a more in-depth analysis of Two Pages, see Wes York’s “Form and Process” in Writings on Glass. I can’t entirely agree with some of York’s analysis; for example, he considers the opening section a subtractive process, while I think of it as a subtractive process within an additive one.