The Boys, along with The Umbrella Academy, were my favourite new shows of last year and it’s fitting that their second seasons have arrived a month or so apart on two of the biggest streaming platforms, Amazon Prime and Netflix respectively. They’re very different, yet both based on alternative comics that have come from neither DC nor Marvel but from more indie publishers Dynamite Entertainment and Dark Horse. Eric Kripke has done an excellent job of adapting the books of The Boys and developing them for TV, actually taking very little from them but capturing the spirit and condensing many volumes into a neat little package.

The comics are much more reliant on dialogue and very little action, as the supes themselves don’t seem to actually go on any missions or perform heroics and just profess to. Instead, the books focus on characters, their interactions and a lot of sexual deviance. The show takes this raw material and blends it with modern superhero movies without losing its originality and edge. One of the best examples of this is the character of Hughie. In the comics, he’s pretty useless and it’s hard to see sometimes why he’s on the team. However, in the show, he’s tech-savvy and useful to Butcher due to the incident where his girlfriend was killed by A-Train. He’s smart and his role in the team develops organically.

Also, in the books, Hughie doesn’t find out that Annie is Starlight and she doesn’t find out about his involvement with The Boys for a very long time. This is inexplicable as she’s so famous and their relationship becomes another reason why he’s invaluable to the team. In the show Hughie was a big fan of The Seven before the incident with his girlfriend and seeing how drastically his perspective on supes changes is the root of his arc; going from idolising to killing them overnight. The show rearranges pieces from the comics in a better order that vastly improves the structure.

However, the biggest difference between the two iterations is that in the books, The Boys have some form of Compound V in them from the start and Hughie is injected shortly after joining them. This means they’re able to go toe-to-toe with supes in brawls and even kill them if necessary. This may be something we see in the show in the future but for now, it’s far more tense and impressive seeing them living life on the edge without it. Ironically, the team in the show are more successful in taking out members of The Seven, just using their wits and skills. The characters and their relationships to each other are also more developed. In the books they’re more like a hit squad and follow orders from Butcher without question.

This works in its own way and lends itself well to the comics medium but the show requires The Boys to be more three-dimensional, with connections to other friends and family. They have better motives and more to lose, all adding to the suspense. The show never forgets the source material though, with numerous references to other supes and teams (G Men, Teenage Kicks, Tech Knight, Drummer Boy etc.). However, the biggest tribute is creating the character of Hughie’s Dad (Hugh Senior) and getting Simon Pegg to play him, as he was the actor that Hughie was based on for the  books.

The show also incorporates modern politics into its narrative to add to the realism. A disturbing sexual assault that takes place is quickly forgotten in the comics but is scaled down and becomes the start of a relevant #MeToo subplot, where perpetrator The Deep really gets his comeuppance and then some. After his victim Starlight speaks publicly about the incident without naming him, their boss puts two and two together (as there have been multiple complaints made about him before) and he’s exiled to the middle of nowhere, where he drinks himself into a deep depression. They pull no punches as they mercilessly mock and emasculate his Aquaman persona, undoing a lot of Jason Momoa’s hard work. 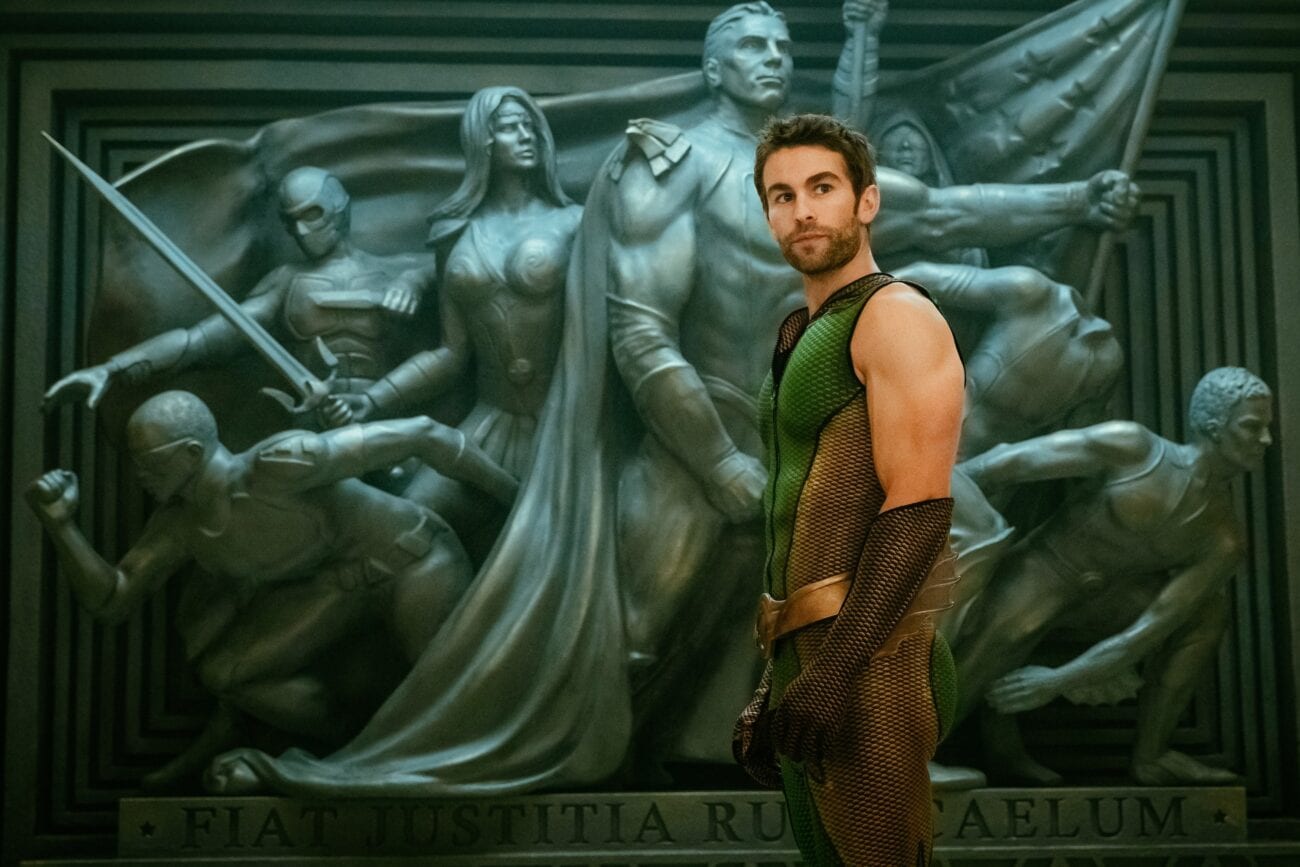 In the second season, this is where we pick up with him. He’s approached by another supe and initiated into some kind of religious cult that are trying to get him back into The Seven for reasons not yet known. The big cliffhanger at the end of the first season was the reveal that Butcher’s wife Becca is alive and has been in hiding all this time, raising a son that was conceived when Homelander raped her. This is another deviation from the books, where she died when the super-powered baby burst out of her and Butcher unceremoniously beat it to death.

Kripke again modernises the source material, not wanting too many female characters to be fridged and merely plot devices to motivate the male protagonists. He’s clearly having fun playing with the fans, using Becca’s new arc to do so; he even used her fate from the comics as a misdirect in the first season. Watching the egotistical and psychotic Homelander clumsily try to play Dad, especially knowing what he’s done to Becca, is one of the most unsettling and chilling things you can see in a show at the moment; but that’s what he does best—sadistic manipulation. Whether it’s this, pounding the ears of a blind supe to show he’s not good enough for The Seven or giving a cringe-inducing, fake speech at Translucent’s funeral.

These dark situations are balanced with black comedy though, translated well from the books. Without the dark humour and violent delights that remind us not to take the show too seriously, The Boys could stray into horror territory, occupied by movies such as Brightburn from last year. It’s these elements along with its willingness to engage in heavy themes that gives the show a hyper real quality that makes it so compelling. It helps that it also has a great, fun soundtrack of classic rock that includes the likes of Iggy Pop, The Clash, R.E.M, The Runaways, The Rolling Stones and Talking Heads. 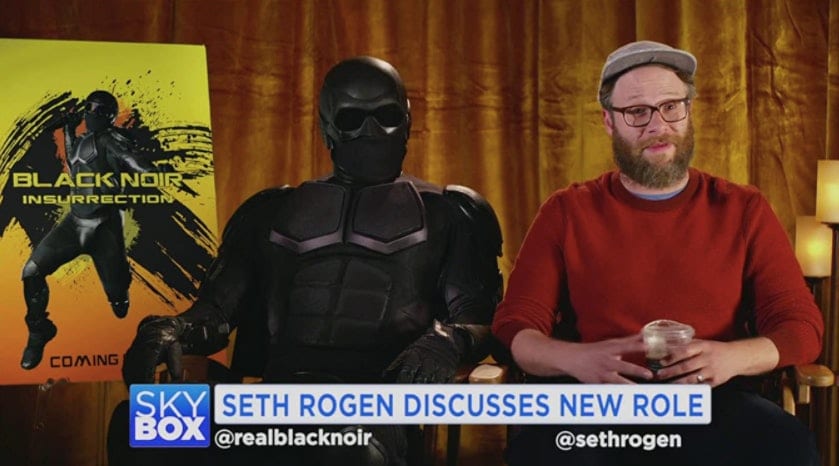 Tensions are running high between Hughie and Butcher at the start of this season. The Boys being on the run, plus Butcher going full kamikaze at the end of the first season and then AWOL since, has pushed Hughie beyond his limit. Their friction is realistic and complex, as they’re two sides of the same coin, due to their similar trauma but very different personalities. It’s easy to see both perspectives but I personally take sides with Butcher. However, it’s true what MM says about Hughie being his canary and it would cost Butcher more than he realises to cast him off completely. It’s a great moment when he steps out to stand up for Hughie against Homelander in Episode 3, calling him a very appropriate C-bomb.

There’s plenty of friction on the other side though and The Seven are coming apart at the seams. With the public finally finding out that supes aren’t born with powers and instead are engineered using Compound V, the company’s finances are in the toilet and the board of directors are facing potential incarceration. After the death of Vice President Madelyn Stillwell at the hands of Homelander in the climax of the first season, her superior Mr. Edgar now has to get his hands dirty on the front line. He’s a great foil for Homelander: smarter, more succinct and not interested in coddling him or trying to keep him happy. In their best exchange, Edgar reveals that Vought is not a superhero company but a pharmaceutical one and that he is merely their product.

He also puts Homelander firmly in his place when he states that by creating super terrorists around the world which bailed Vought out in the short term, he gave away their greatest product to the detriment of the company. This rift between The Seven and those that monetise and market them is intriguing and I’m eager to see where it goes next. In the climax of Episode 3, Edgar has to ask for their help and Homelander delivers some strong words about how they should do it for themselves and not for him, as they’re the supes at the end of the day. 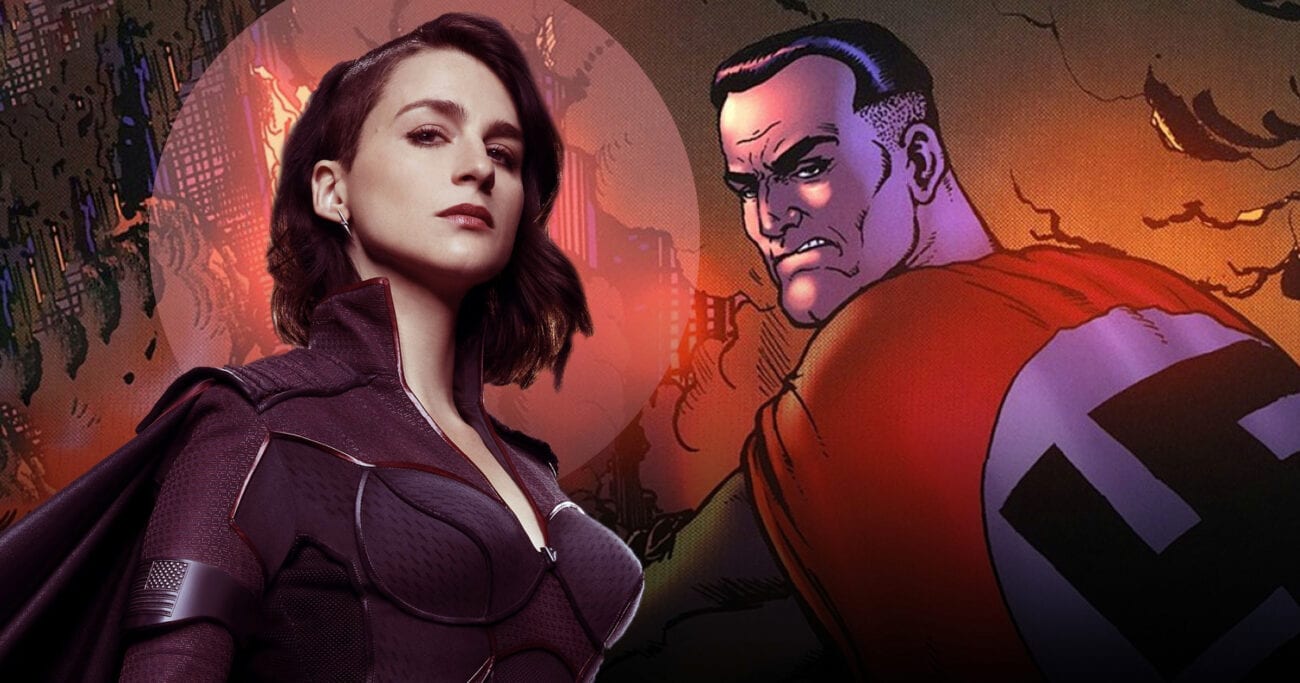 It‘s not helping that Edgar’s latest addition to the team, the outspoken and social media-friendly Stormfront, is also pushing Homelander’s buttons by hogging the spotlight and not respecting the hierarchy. I’m not entirely convinced by her character at the moment but that may be because I was looking forward to seeing the version from the comics who’s a hardcore German Nazi. She has shown signs of being severely racist, so maybe they’re building up to this reveal. Still, I’m keeping an open mind and I’m sure it’ll be interesting to see what she does next. Black Noir’s still keeping me entertained with his hilarious minimal gestures and I’m hoping we see more of him in the rest of the series.

All in all, the second season of The Boys is off to a great start despite an initial review bombing on Amazon, with 49% of 1400 reviews left by September 6th giving the series a one star rating, most of which praised the available episodes while voicing criticism of its staggered schedule. I don’t blame them, as deciding on the old-fashioned release of weekly episodes was a really poor decision, especially as the first season was released all in one go and Amazon are on the back foot to Netflix who rarely do this. At least they dropped the first three episodes in one go which is nearly half the series.

Still, I’m super excited for the rest of the season and I’ll be following up with another article after the last episode has aired, so check back in then if you want to read more coverage of this wonderfully cynical show.

More From: The Boys