Hayao Miyazaki is a god, and if anyone tries to tell you there is a Studio Ghibli film that isn’t worth watching, then I would treat anything they tell you in the future with suspicion. And within its faultless catalogue, one film that stands apart from the others is a finely polished gem called Whisper of the Heart. Directed by neither of the studio’s twin pillars, Miyazaki or Isao Takahata—although it was adapted by the former—Whisper of the Heart was the only directorial effort of Yoshifumi Kondo. The film that resulted is simultaneously the most grounded and one of the most touching films the studio ever produced, as well as one of the best coming-of-age movies one could hope to see.

Adapted from the manga of the same title by Aoi Hiiragi, Whisper of the Heart features many of the tropes common throughout the Studio Ghibli oeuvre. There’s the usual blend of sentimental fairytale imagery and a mature, fine-grain ruggedness, and it features the typical story threads of adolescent first love and coming of age that nearly always mark the studio’s output. Although the film’s fantasy elements are minimal—restricted to the folktales shared between the characters and flights of adolescent imagination—the film often borrows the typical register and iconography of the studio’s more typically supernatural films. The scene where young heroine Shizuku follows the “snobby” cat Muta up a series of tight exterior stairways and back alleys visually and narratively echoes the magical transportations of My Neighbour Totoro, Spirited Away, or the film’s own spinoff, The Cat Returns.

As it happens, though, rather than a sojourn to some enchanted grotto or haunted bathhouse, Shizuku’s journey takes her nowhere more out of the ordinary than an aspirational Tokyo suburb, but no less life-changing experiences await. She traces the cat to a dusty boutique, where she discovers a treasure trove of antique wonders, but finds her reverie spoiled by the reemergence of Seiji, a seemingly arrogant boy who has an unerring ability to get under her skin.

The bulk of the film’s story is comprised of this sort of minutiae. We follow Shizuku about her days of summer spent in the library reading books, writing song lyrics, hanging out with friends, being pestered by her older sister and the adolescent fluttering in her chest, and generally doing very little studying. The film never feels disconnected, though, as there’s a constant lure pulling her toward that antique shop, it’s avuncular proprietor Nishi, and the boy living beneath it, who may not be so bad after all. Many of the Ghibli films are praised for showing that girls’ stories needn’t have very much to do with falling in love or boys, and Whisper of the Heart is a little exceptional in this. Shizuku’s destiny is indeed a boy, but he is equally a catalyst for so much more.

It’s in the film’s second half that its real resonances begin to emerge. After a truly magical sequence set to the film’s recurring musical motif—various revisions of the John Denver classic “Take Me Home, Country Roads”—Shizuku begins to wonder what she wants out of life, and it’s at this point that she decides to take the road less travelled. Inspired by the boy’s determination and drive to become a violin maker, she resolves that she wants to drop out of school at 14 and become a novelist.

It’s in this decision that the film delivers some of the best-written scenes not only in the Ghibli oeuvre but, I fervently believe, that I have ever seen in film. Naturally, her decision to forge her own way in the world at such a young age disturbs her parents, who give her a “big sitdown talk” over the issue. But Whisper of the Heart averts cliché and predictability at every turn, and rather than dishing out a stern talking-to, her parents are calm and concerned and talk to Shizuku like the adult she has been behaving. The two tough but supportive monologues Shizuku receives, first from her father, Seiya, and then from her mother, Nishi, are some of my favourite moments in cinema:

Seiya: Not everyone needs to follow the same path […] go ahead and do what your heart tells you. But it’s never easy when you do things differently from everyone else; if things don’t go well, you’ll only have yourself to blame.

The slow pace of these scenes and the nuance of the dialogue renders the characters and their situation in a complex reality. They are all ambivalent about what is happening; they harbour doubts and reservations but love one another, and they are unsure whether this love is better expressed as trust or control. You feel the importance of the decisions the characters are making through the time taken over each word, and the contrast between the natural dialogue (like Shizuku’s mother casually telling her father off for smoking), and the more deliberated and considered miniature monologues.

Like everything else the film depicts, this decision is not sugarcoated: It will be hard work, and the film shows the dedication and passion Shizuku puts into her book. Her grades suffer, she misses meals, and she stays up till 4 a.m. scratching her imagination into her notepad. But after all her hard work and commitment and personal risk, she finally has her book and takes it to Nishi, who has asked to be the first one to read it. Unable to bear watching him read, she goes downstairs and waits, hands trembling for his verdict. We feel somehow as if her whole life’s purpose rests on what he will tell her when he comes down to offer his criticism. 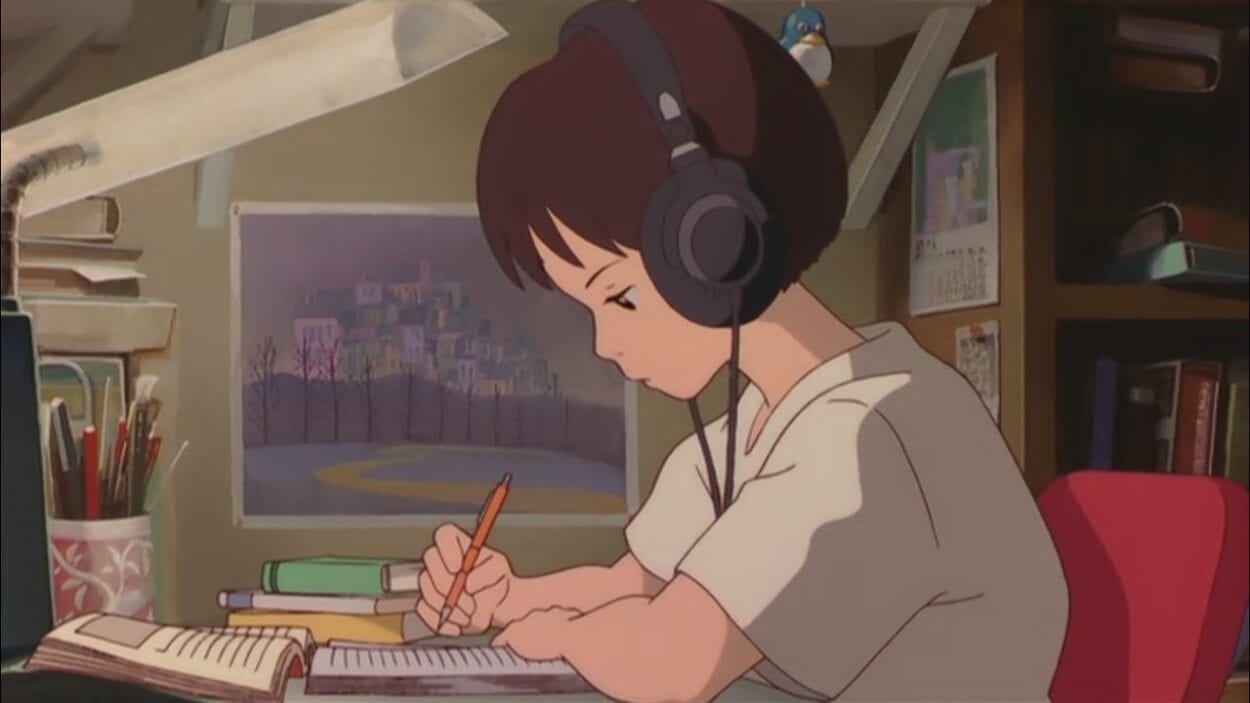 But in the end, he tells her nothing she doesn’t already know. Her book isn’t good enough. Not yet. It’s a start, proof she can do what she sets her mind to, but her work is far from over:

Nishi: Thank you, dear. It was really wonderful.

Shizuku: No, it’s not! It’s a mess. The storyline goes all over the place. All the characters’ dialogue sounds corny. You have to tell me the truth. I know it’s a complete disaster.

Nishi: No. It’s just a bit rough, dear, like Seiji’s violin. What I read was raw and heartfelt. You should be very proud for all your hard work. You’ve dug inside your soul and found some real gems. Next you’ll need to polish it, which will also take a lot of work. There’s no need to be upset. Just have a little patience.

Kondo himself was reputedly destined for greater things yet. Though still going strong, Miyazaki has been talking of retirement for decades, and he and Takahata were reportedly grooming Kondo as their replacement as head of the studio. However, the work ethic his film quietly instilled caught up with him, and Kondo died from a heart attack in 1998, leaving Whisper of the Heart his sole contribution to the Ghibli canon, and despite more than 20 years in the business, the only opportunity at solo directing he received.

With this one film, he displays more tenderness and assured understanding of human behaviour than most filmmakers can muster in their entire careers. The film is replete with beautifully observed details than enrich the experience no end.

Just take the scene where Shizuku has heard the boy she likes is going away, possibly for years. Needing someone to talk to, she visits with her friend Yuko. Rather than go straight to her house, we see her meet Yuko outside a newsagent’s first, then they walk together to her house. Upon their arrival, we learn that Yuko isn’t talking to her father right now, although we never learn why. Then they sit and eat tea and biscuits while they talk, surrounded by stuffed animals, Shizuku moodily hugging a big caterpillar cushion with a lion’s face. It’s such a beautifully realised slice of life that tells us so much about these characters and their relationships to not only one another, but everything around them.

Whisper of the Heart is full of moments like this that ground it in a naturalistic, lived-in environment, and makes its often sentimental tone easier to swallow. It’s the creation of this sort of scene that might very well be what Nishi means by “polishing” a story. How many redrafts does it take for a detail like that loony caterpillar pillow to make it into the script?

In real life, such occurrences take place with no external effort. But in a piece of art—especially an animated film where every single element not only had to be thought up but rendered by hand—the kind of lived-in and realistic details found throughout not only this film but the whole Ghibli canon are significant of either real genius or a herculean effort of redrafting. Despite the film’s wry digs at Tokyo’s “concrete roads,” the level of care and love put into every one of the numerous backdrops and locations used in the film make it a love letter to the city itself, as much as anything else.

I believe you can often judge the quality of a film by the number of characters who feel real and seem to have implied lives of their own offscreen. From Shizuku’s bossy sister making plans to live on her own, to Sugimura, the sporty boy caught in the love triangle between Shizuku and Yuko, Whisper of the Heart doesn’t have a single named character who doesn’t fit that bill.

There’s an extended sequence when Shizuku’s mother and sister discuss the latter’s plan to move out for a minute or so, before getting around to discussing Shizuku and her worries. Perhaps no scene better suggests this whole world of lives just like those of our protagonist, all happening just offscreen, than the sublime little moment when Nishi and his old friends arrive home to find Seiji accompanying Shizuku’s singing on his violin. Without a word passing between them, Nishi and his friends pick up instruments and join in. Once the song is over, they make their introductions and say their goodbyes, and neither of the two friendly multi-instrumentalists is seen again. It’s the kind of beautifully irrelevant moment of connection that life, and this movie, is made on. 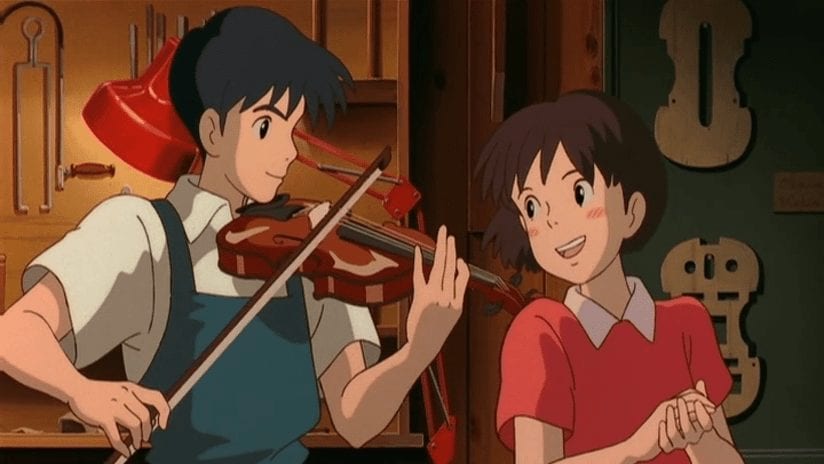 Whisper of the Heart is a film that I firmly believe anyone hoping to make a living in a creative lane, or even just make their own unique way in the world, should see. It’s the perfect education for lost, passionate teens with stories in their hearts and the will to bring them to life, and that passion and dedication are not only found in the film’s message but breathed into every frame of the film itself.