The latest season of Fargo is set in 1950 in Kansas City, Missouri, and begins with a brief history lesson from high-schooler Ethelrida Smutny, played by E’myri Crutchfield, summarizing Frederick Douglass. “From the moment our feet touched American soil,” she says, “we were criminals.” Her point is underscored through her repeated trips to the school administrator for disciplinary beatings. “What did you do this time?” she is asked, and replies with a steadfast “I was maligned.”

Ethelrida details the history of organized crime families overthrowing each other one after the other. As she describes the conflicts and power shifting hands from the Jews to the Irish to the Italians and Blacks, leading to the current tension between the Fadda family and the Cannon crime syndicate, she reminds the audience, “and here’s what you need to know about the people in that room; none of them were white.”

There is of course some historical truth to that, as Chris Rock’s Loy Cannon later reminds his rival mafia boss Donatello Fadda, “I see the signs in the stores. No Blacks, no Italians.” Cannon isn’t naive about assimilation, but he is getting to the unappealing truth behind the question “if America is a nation of immigrants, who gets to become an American?” Until America sees them otherwise, both of them will only be seen as criminals. 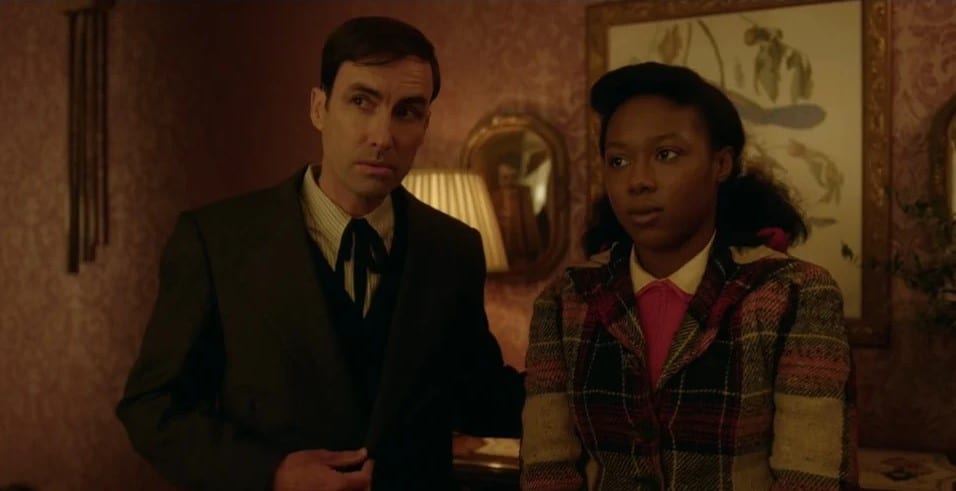 Noah Hawley’s experiment with the 1996 Coen brothers film has mostly been a fascinating success. In the first season, Hawley rearranged themes and imagery from the film and turned a loving homage into an expansion of an unusual cinematic/television universe.  Season 2 pushed the boundaries quite a bit, as it further distinguished itself visually and went back to the 1970s to revisit a story referenced in the first season. Season 3 might have been underwhelming, but it still delivered complex characters to love and hate and plenty of existential soul-seeking.

Beyond thematic similarities, these stories share characters occasionally and sometimes a plot point references another. They all exhibit some aspect of the American character, how the unjust pursuit of power and capital have impacted the people living here. They’ve also all been very white, which as Fargo continues it becomes increasingly difficult to ignore. America is a different place than it was three years ago, and the invisible mechanisms behind domestic tension that shows like Fargo were instrumental in revealing are now more in the open.

Season 4’s setting is furthest south, yet still undeniably the same country and same world as the suburban Minnesota and rural Dakotas depicted previously. Kansas City, and Missouri as a whole, at the cusp of the Bible belt and where western expansion really took off, embodies many of the paradoxes of the American population. In fact, Fargo is in many ways a post-modern take on Westerns, implying that the anarchy of the wild west was never truly tamed, and it is still a land where cops and robbers chase each other down in futile gun fights leaving behind trails of blood in the snow.

Fargo’s introduction of warring immigrant crime families feels more like a Scorsese than Joel & Ethan Cohen, but that is certainly no complaint. But one thing that this season is going to have to grapple with is Fargo’s intentional avoidance of portraying criminal stereotypes, insisting that brutality and corruption is as rampant among car salesmen and insurance agents as it is drug kingpins.

We can already see how the supposed power players are trapped in their own systems of oppression as the rival gangs of immigrants in Kansas City trade their first borns in an ongoing peace-keeping tradition that, despite going horribly wrong on every occasion, continues with the Cannons and Faddas. Even if we can infer that Season 2’s Mike Milligan (Bokeem Woodbine) is very likely Loy’s son Satchel Cannon, this doesn’t exactly tell us who gets the upper hand by the end of this season. Milligan, it turns out, was the name of the Irish boy who turned against his own father on behalf of the Fadda family; he now takes Satchel under his care.

All of this is just the setup for Fargo’s typical deployment of unfortunate coincidence and deadly nihilism in the form of Nurse Oraetta Mayflower (Jessie Buckley), a cheerful sadist who happens to live across the street from Ethelrida’s family. Mayflower is perhaps the perfect embodiment of a Fargo villain, delivering lines of dense medical jargon that fail to dress up her overt cruelty and racism. “I’ve found in my 36 years on God’s green Earth that it’s absolutely critical to be precise in your use of language so as to avoid instances of misreckoning,” she tells Josto Fadda, played by Jason Schwartzman, who in turn fails to see how she might not pick up on the sincerity behind the son of a mafia boss asking a shady nurse to “take care of” his father once he’s landed in the hospital thanks to a stray pellet from a toy gun.

Fargo is as much about crime and violence as it is the stories humans tell themselves to find meaning in the chaos. The heroes often fail, or at least their victories are marginal at best, because they are unable to imagine cruelty. But there are always moral characters we can relate to, and so far, in both the film and TV series, they’ve been in law enforcement. That is, until this season, with Detective Otis Weiff (Jack Huston), an OCD cop working with the Fadda family.

Meanwhile, the show’s moral center remains on Ethelrida, as the stacking tension of her family’s funeral home loan to the Cannons and Mayflower taking her on as an ominous “special project,” putting her directly in the middle of a hurricane of deadly personality conflicts. The only problem is that even with its new setting and a phenomenal cast, Fargo might be too predictable in its own rules and paradoxes to land any real surprises this season, but if it  continues to be as entertaining as these first two episodes it could be as good as Fargo gets.