Howdy folks, time for a round-up some of the most interesting Music News, tour dates, new single releases and albums we hear about on the grapevine. This week Shame, Gorillaz (feat. Robert Smith), Tiña, Tropical F*ck Storm, The Mountain Goats, SUUNS, Fontaines DC, Lambchop and Will Butler each have stuff to get excited about.

Shame have announced their much-anticipated return, via the frenetic, storming new single “Alphabet.” It marks their first new music since the release of their critically acclaimed debut album Songs of Praise in 2018 via Dead Oceans.

Alongside, the band have shared a Tegen Williams-directed video for the single, capturing the unnerving nature of hypnagogic hallucinations and the distressing way the mind can play tricks on us while dreaming.

“Alphabet is a direct question, to the audience and the performer, on whether any of this will ever be enough to reach satisfaction. At the time of writing it, I was experiencing a series of surreal dreams where a manic subconscious was bleeding out of me and seeping into the lyrics. All the unsettling and distressing imagery I faced in my sleep have taken on their own form in the video.”

Shame’s return, at under three minutes long, is a burst of energy that blazes bright and fast. It’s a restless and relentless track that feels familiar yet bigger and bolder than anything the band have done before, signalling the arrival of a new era of Shame. 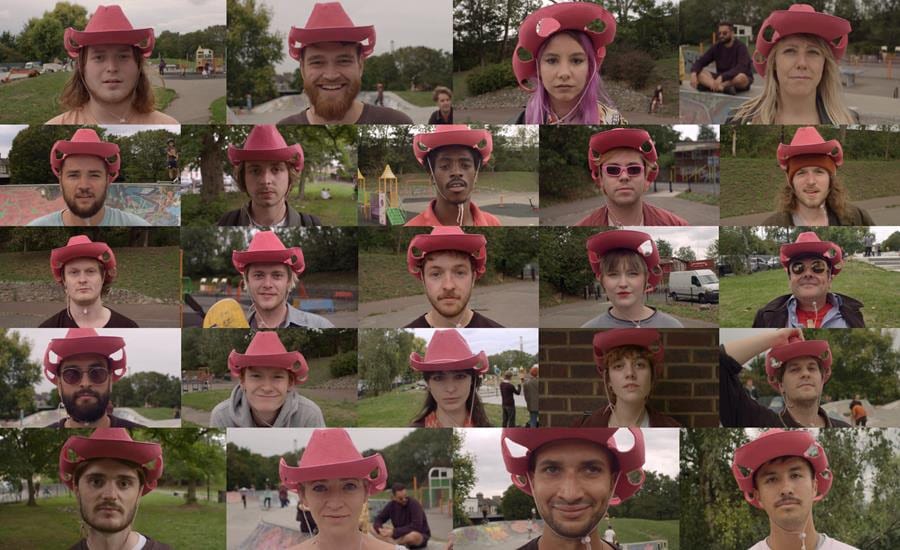 Enigmatic South London band Tiña follow up the announcement of their much-anticipated debut album ‘Positive Mental Health Music’ (out 6th November via Speedy Wunderground) with new single ‘People’. The track comes on the heels of their previous single ‘Golden Rope‘, which was recently A-listed at BBC Radio 6 Music.

The final track on the album, ‘People’ is a song about the cloud that lifts following a serious bout of anxiety or depression, the lyrics celebrate solidarity and togetherness, something deeply lacking in modern England. The single’s accompanying video mirrors this message of togetherness with friends of the band and members of the local community coming together and donning frontman Joshua Loftin’s trademark pink cowboy hat at a skatepark.

Speaking briefly on the track, Loftin says, “The sun’s going down, John Lennon and Elton John are in a small rowboat together, they’ve just been intimate with each other and are lying down side by side, and everything is okay.”

Going on to speak about the video, he says, “This video was a big collaboration of ideas and work from different people all melded into one. A big shout out to the friends & community who came out for the skatepark part of the video shoot and made it a great day.”

In addition to the new single and video, Tiña have also announced new UK / IRE live dates for 2021.

To record the new album, the band headed back into the homely ‘Speedy’ studio with producer Dan Carey in South London. Lead singer/songwriter Joshua Loftin explains that he used the songs to “work through a mental breakdown” and the 11 track LP provides an honest and intimate portrait into this process of self-examination, covering themes of anxiety, depression, love, sex, isolation, fear and failure. Yet, ‘Positive Mental Health Music’ is anything but a difficult listen: the tracks are hook-filled, dynamic and even danceable at times. Loftin’s cooing vocals, his lyrics poetic yet slightly self-mocking, sit atop a blend of psych-pop keys, drums and guitars.

“What caught my ear was the beauty of their chord changes,” says Carey, who first saw Tiña at The Bunker Club, a small, sweaty basement venue in Deptford. He hoped to capture the experience of the band live, opting to record three songs in a row as continuous pieces with an intention “to capture the mind state we experience at a gig, the way time travels and how our senses are completely distorted”.

The LP was recorded on tape for the warmth that comes with analogue recording but also to give the process a sense of ceremony and gravity, “tape is limiting, and unlike with the computer when you wipe it, it’s really gone” – this Carey believed creates a “psychology of process whereby everything recorded becomes precious”. The idea of recording-as-ritual is in keeping with the band’s ethos; Loftin referred to live performance as “ceremonial… I feel like a Shaman, hence the bright colours” – referring to the pink, felt cowboy hat and velour cycling shorts he wears at every show.

‘Positive Mental Health Music’ is an emotional and tender record, a mood reflected in the recording process says Carey, “those days we had in the studio had a distinct tone to them”. He praised Loftin’s way with words “that can touch you so directly”.

On the milestone for Speedy Wunderground Carey says, “I’m so glad this is the first record on the label, I’m really proud of it.”

Australia’s Tropical F*ck Storm have released their Legal Ghost 7,” out today on Joyful Noise Recordings. Alongside, they share the B Side, a cover of Talking Heads’ “Heaven”.

Recorded on the same four-track machine that “Legal Ghost” was originally recorded on over 20 years ago, the song features guest performers Don Don and H’y, on pedal steel and violin, respectively.

“‘Heaven’ is this weird chameleon-like tune which has meant one thing for about 40 years, but in light of all this pandemic shit and all the trouble and strife in the western world, has done a total 180-degree flip and now means the reverse of what it once did. It also has a lovely melody.”

“Heaven” and the title track that make up the 7” are TFS at their existential best, and it’s just what the doctor ordered. The songs were recorded at Dodgy Brothers Studio in Central Victoria, right before the world went indoors. To further celebrate the 7″ release, the band are selling a brand new Joe Becker-designed t-shirt exclusively on the Joyful Noise website. The design has two colour options: white with black ink, and white with multi-coloured ink (image below). To quote the band, Joe Becker is “the reclusive-Canadian-evil architect” behind the cover artwork for all of Tropical F*ck Storm’s releases.

Getting Into Knives highlight “Get Famous” compresses the Mountain Goats’ fervor into a backhanded benediction, a three-minute pop entreaty to reach for the stars. But frontman John Darnielle isn’t the type to wish fame on anyone. Instead, he sings the song’s title as if it were a curse.

From John Darnielle: “If I told you all how much fun we had making this one you wouldn’t even believe me, but we hope it comes through.”The Mountain Goats’ John Darnielle, Matt Douglas, Peter Hughes, and Jon Wurster recorded Getting Into Knives in a single week with local players at the legendary Sam Phillips Recording in Memphis, Tennessee. Cohabitation radiates throughout Getting Into Knives, with many tracks featuring seven or more musicians playing at once. Following April’s Songs for Pierre Chuvin and 2019’s In League with Dragons, Getting Into Knives is a document of a band at the top of its game.

Getting Into Knives arrives October 23. Pre-order on cassette, CD, and 2-LP wherever records are sold, as well as salmon-coloured deluxe vinyl in the Mountain Goats store. In addition, the Merge store carries limited-edition metallic gold Peak Vinyl and a new enamel pin, both available à la carte or as part of a super bundle that comes with a free embroidered patch while supplies last.