Despite the imposing COVID-19 pandemic, the 2020 BFI London Film Festival will kick off with in-person screenings on the 7th of October, with virtual press screenings commencing a few days earlier on October 2nd. It remains to be seen how the restrictions will impact the festival proper once it begins, but its online life extends to virtual screenings available to the public as well as the advance press and industry ones.

My own experience of the festival kicked off on October 2nd with Talya Lavie’s Israeli newlywed comic-drama Honeymood, of which we will talk more once the festival is underway and embargoes are lifted on October 8th. This was then followed by homegrown musical drama Mogul Mowgli, which premiered earlier this year in Berlin and is scheduled for wide release before Halloween.

The film, written and directed by Bassam Tariq and starring Riz Ahmed, who co-wrote the screenplay with Tariq, follows Zaheer (Ahmed), a rapper forced to reconnect with his family and his Pakistani roots when he is stricken by a serious muscular disorder in between touring. As Zaheer finds himself thrust back into dependence upon both a family and a culture he has become dissociated from, he begins to feel a sense of guilt over representing a group he has become so distanced from on the public stage. As his future and autonomy slip away from him, he is drawn back into a world that has become as alien and disconcerting as it has uncannily familiar. 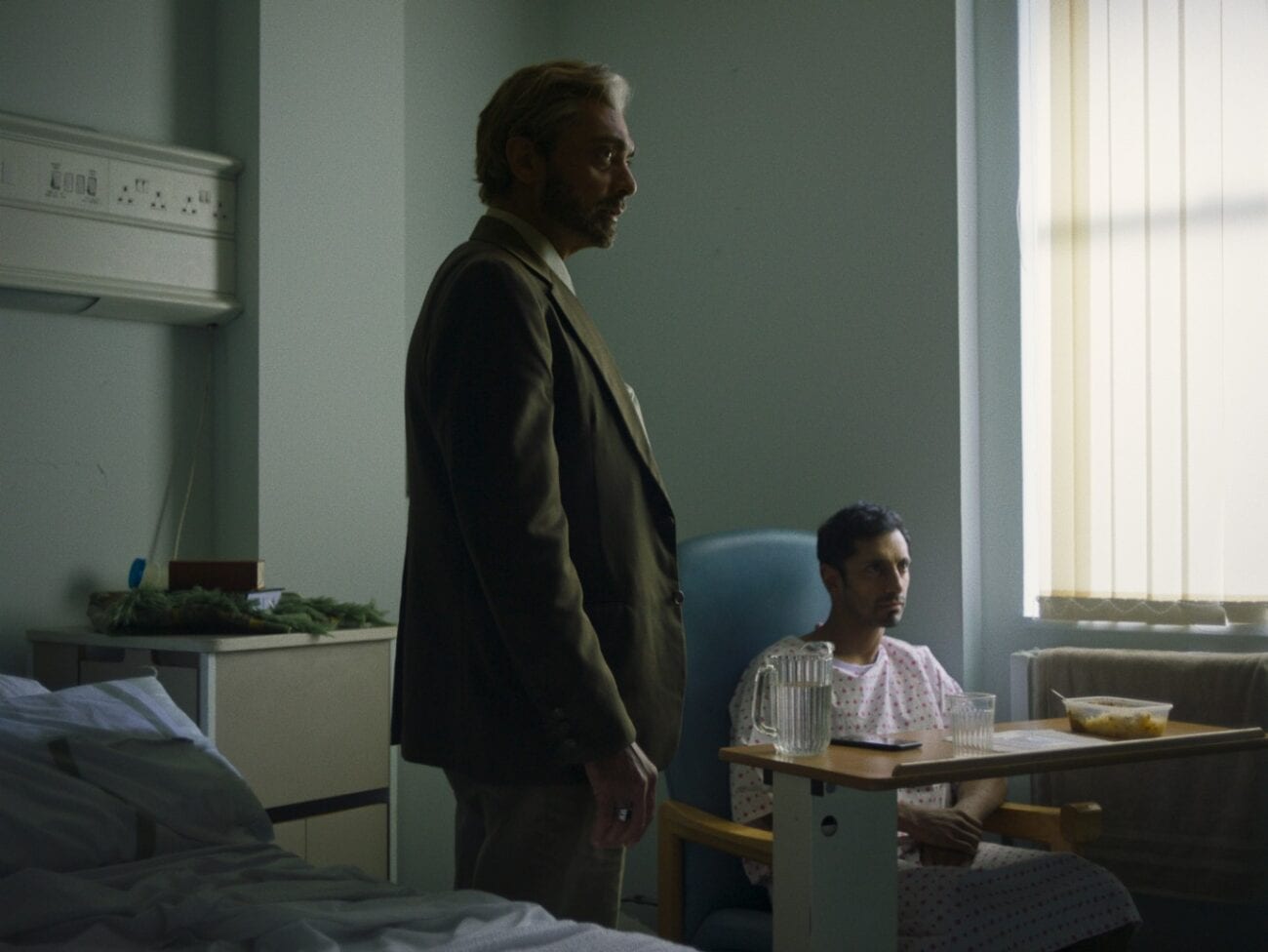 Shot in a tight academy aspect ratio, the film has a rawness and intimacy that is matched by the intensity of Riz Ahmed’s career-best central performance, drawing on his own experiences, both as a rapper and as the child of exilic Pakistanis raised in the UK. In The Long Goodbye, the title of both a short film and an album both released earlier this year, Ahmed explored themes of identity and encounters with racism in an alternately visceral and incisive manner, but Mogul Mowgli gives us a far more personal and vulnerable look at the life and emotions of its central character.

As the film utilises Ahmed’s own music and its themes of diasporic identity to tremendous effect, there may be some finer cultural details of tradition lost on many viewers. However, these elements contribute both to the extremely personal and credible portrait of a man whose identity is at odds with itself, allegorised in the film as his autoimmune disorder, and to the dissociation he feels from his cultural heritage. The exploration of these themes rarely feels heavy-handed, didactic, or overly pleased with its own novelty and instead comes from an organic point of self-expression that’s obtuse enough to convincingly feel like a window into a personal experience.

The direction by Tariq is evocative, immersive, and compact, and the supporting cast all give solid performances, but Mogul Mowgli is unquestionably Ahmed’s film. His performance captures both energy and frailty that feel entirely unmanufactured, and his presence carries the film through the ambitious scope of its themes and the detailed, small scale and acute nature of its execution. Thanks to his work, despite the film’s refusal to water down its own cultural specificity, the drama of Mogul Mowgli never feels inaccessible to outsider viewers and stays rooted in tender emotional spots that are instant empathetic touchstones.

The Painter and the Thief

The imagery of healing and physical rehabilitation continues into The Painter and the Thief, an extraordinary fly-on-the-wall documentary from director Benjamin Ree. The documentary follows Norwegian painter Barbora Kysilkova and the unlikely friendship that blossomed between her and Karl-Bertil Nordland, the man who stole one of her paintings. After his arrest, Kysilkova approached Nordland and, intrigued by him, asked if he would model for her. From this strange request emerged a beautiful lifelong friendship, uncannily captured for posterity by Ree’s camera.

When first asked why he stole her painting, Norland replies “because it was beautiful.” Immediately, the viewer is placed on their guard and begins asking questions about who is exploiting whom in this situation. At the story’s commencement, Nordland is an addict and former gang member. The criminal with a heart of gold is such a cliché, and this could very easily have turned into a trite story of a well-meaning, middle-class woman saving a lost soul from himself.

However, the sincerity and the personal struggles of both parties soon become clear. The moment early in the film when Kysilkova presents Nordland with his image, immortalised in oversized baroque splendour, is one of the most extraordinarily powerful moments of genuine emotion I’ve seen captured on screen all year. Moments such as this elevate The Painter and the Thief, grounding it in the very real emotions of the two actual people at its centre. Nordland and Kysilkova are so much more than the roles assigned to them by the title. Beyond their initial encounter, the film follows their respective lives as they grow and endure individual hardships, eventually becoming all but unrecognisable as the same people who began this poignant and eventful chapter of their lives.

Ree’s camera often feels distressingly intimate, pulling you into the lives of its subjects in a way that’s all but impossible to avoid becoming invested in. There are wit and an enormous amount of warmth in the tale, in spite or because of the difficult territory events pull it in. As Kysilkova and Nordland endure domestic abuse, drug addiction, imprisonment, and hospitalisation, it’s impossible not to have questions about the decision to keep the cameras rolling. When Kysilkova’s boyfriend asks how she is able to turn Nordland’s suffering into art (her oil paintings are consistently absolutely stunning), he may as well have been asking the cameraman filming the conversation the same question. Kysilkova’s response is that he gave her permission, her boyfriend remains sceptical.

The film’s pace is a concern at times, often feeling too slow. However, the viewer’s emotional investment in the two real protagonists never wavers, as they find themselves pulled into something bigger than any documentary. You really feel as if you’ve been through something with these people and have come out the other side stronger for it. By the end, I felt as if I had aged years in the last 102 minutes.

Where a film such as Whiplash captured the intensity of devotion to a musical craft, treating achievement as an almost shamanic state achieved only through blood sacrifice, Chaitanya Tamhane’s The Disciple looks at devotion as quiet meditation. Rather than a demigod in an ecstatic reverie of technical skill, The Disciple depicts the virtuoso as a humble and tragic figure, perpetually seeking perfection that is either unattainable or fleeting. It wholly rejects the mythologising of true greatness and embraces a portrait of an artist as a student, becoming master only in relative terms. 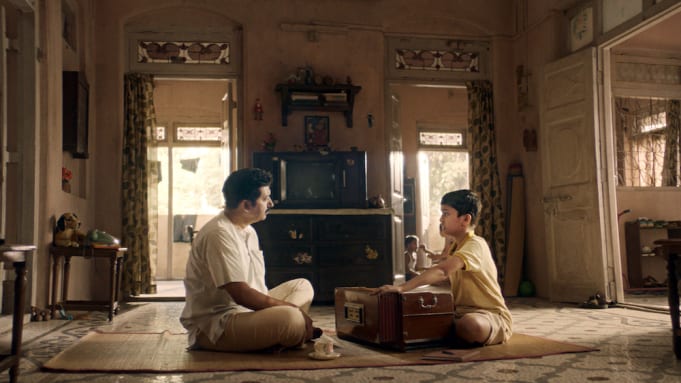 The film follows Sharad (Aditya Modak), an aspiring Alwar singer, who over the course of decades becomes disillusioned with his career path. Alwar is a form of Indian classical music, deeply rooted in form and tradition. It takes decades to master and as Sharad begins to learn it as a child, at the feet of his father, it is already falling out of fashion. Sharad doggedly pursues the refinement of his instrument, ever falling short of his own ambitions, idolising his forebears in the genre and shunning those who engage in what he has been taught to perceive as diluting the art, isolating himself more and more.

The Disciple is a sombre and reflective look at both the joys of music and the personal toll taken by singly devoting one’s life to pursuing both an idealised standard of accomplishment, and the rigid enforcement of tradition. The film is admittedly a very slow burn indeed, despite how full of music it is. Aspects of the story would suggest a more accessible, ballad-like tale. As the years tick by and Sharad watches the world change around him, his own priorities seem ever more irrelevant. However, the delivery is detached and reflective, recalling the work of Satyajit Ray or Edward Yang, following a bittersweet life of compromise, single-minded devotion, and ephemeral ambition. Those with the patience to stick its academic leanings, though, will most certainly be rewarded with a poignant cautionary character study that will linger long in the memory.