Neon Genesis Evangelion is a show about a lot of things. It’s about teenage kids piloting badass giant mechs to fight invading aliens. It’s about a vision of the origin of humankind that marries science-fiction tropes and Western religious iconography. It’s about a penguin who lives in a refrigerator.

A lot of things.

I would argue, though, that the most important of these subjects is the difficulty of getting close to people. The series is chock-full of people who just cannot understand each other, usually because they are so racked by their own fears and neuroses to reach out. I don’t say that as a criticism, either—these people all have some serious problems. Nobody in Evangelion is seeing a therapist and they all really should be. Anyway, my point is that this is a show about relationships, and of the many we see dissected into metaphorically gory detail, the most important is the one between the two central protagonists, Shinji Ikari and Misato Katsuragi.

Shinji and Misato are the two most prominently featured characters in the show, (in fact, they and Ritsuko are the only characters to appear in every episode) so the importance of that relationship seems self-evident, but I think it’s also so important because it’s closer than any of the others on the show to being a healthy and empowering one. For all that their differences rub each other the wrong way at first—Shinji’s passivity bothers Misato; Misato’s slovenliness bothers Shinji—they both genuinely want to get along, and they have more in common than even they understand. 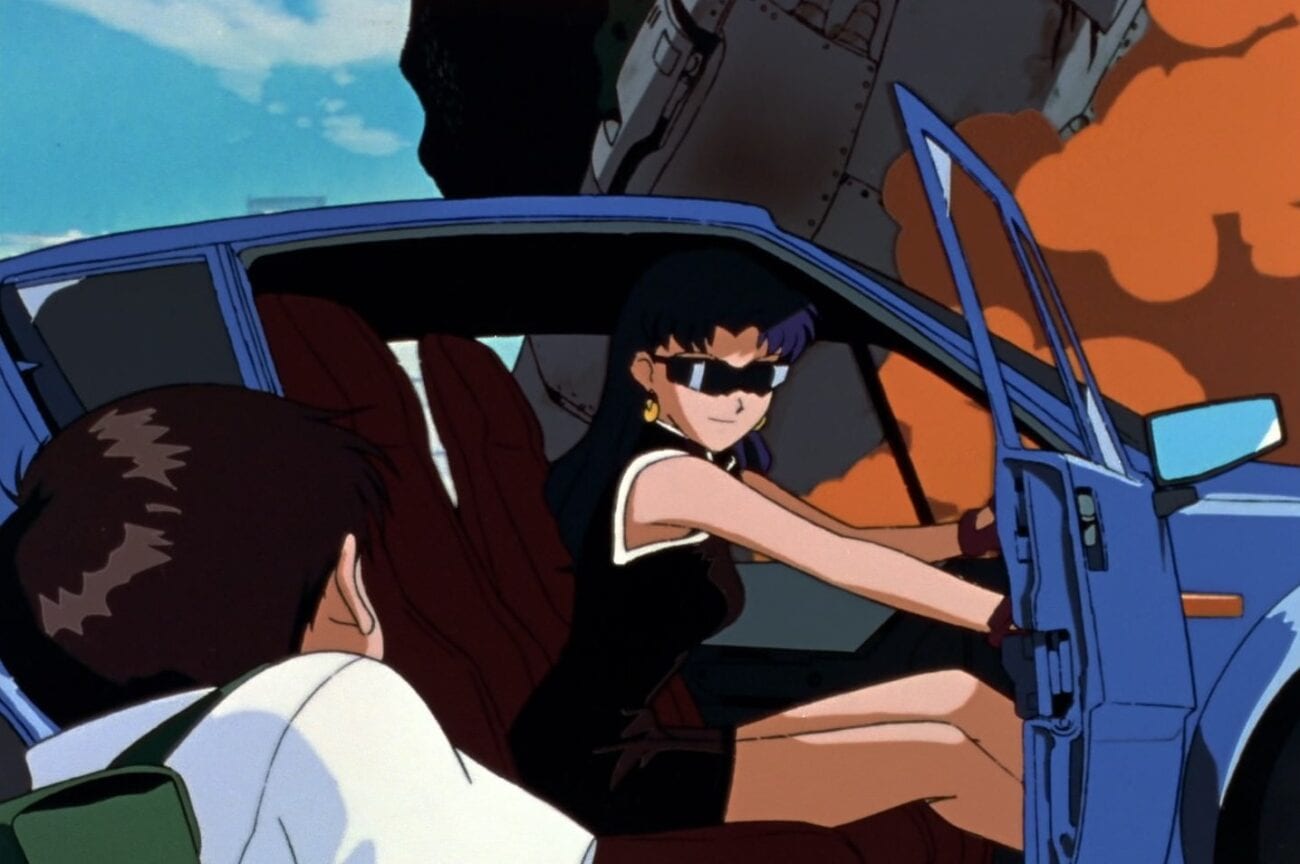 The first half of the show chronicles their growth into becoming unlikely… Friends? Colleagues? Family? All of the above, I suppose? Part of what makes their dynamic so fascinating is the ambiguity of it. It doesn’t exactly fit into any of the traditional relationship archetypes. On the most superficial level, she is an adult and his legal guardian, but she never becomes a maternal figure towards him; as important as his late mother is to the story, parallels between her and Misato are notably absent. Type-wise she’s closer to a much older sister or a “cool aunt”, but even that doesn’t cover it all. There’s their professional dynamic to consider as well, since she is his superior officer at NERV, which is more concrete, but also less grounded in reality since kids young enough to need a legal guardian do not (and should not) have superior officers in the first place.

There’s also a decidedly sexual aspect to their relationship. I wouldn’t quite call it a crush on his part, but the “Do you want to become one with me?” sequence in Episode 20 is evidence enough that he’s somewhat sexually preoccupied with her, at least to a comparable degree as with Asuka and Rei. This is very one-sided though; any flirtatious or provocative behavior from Misato’s end generally seems subconscious. Indeed, the sexual aspect of her identity, provoked by the return of her ex-boyfriend Kaji, is something she specifically hides from Shinji out of shame. Even the infamous kiss she gives him in End of Evangelion is simply one last Hail Mary play to provoke Shinji into action. Honestly, the male-female sexual dynamics at play in Evangelion could take up an entire separate article or four. 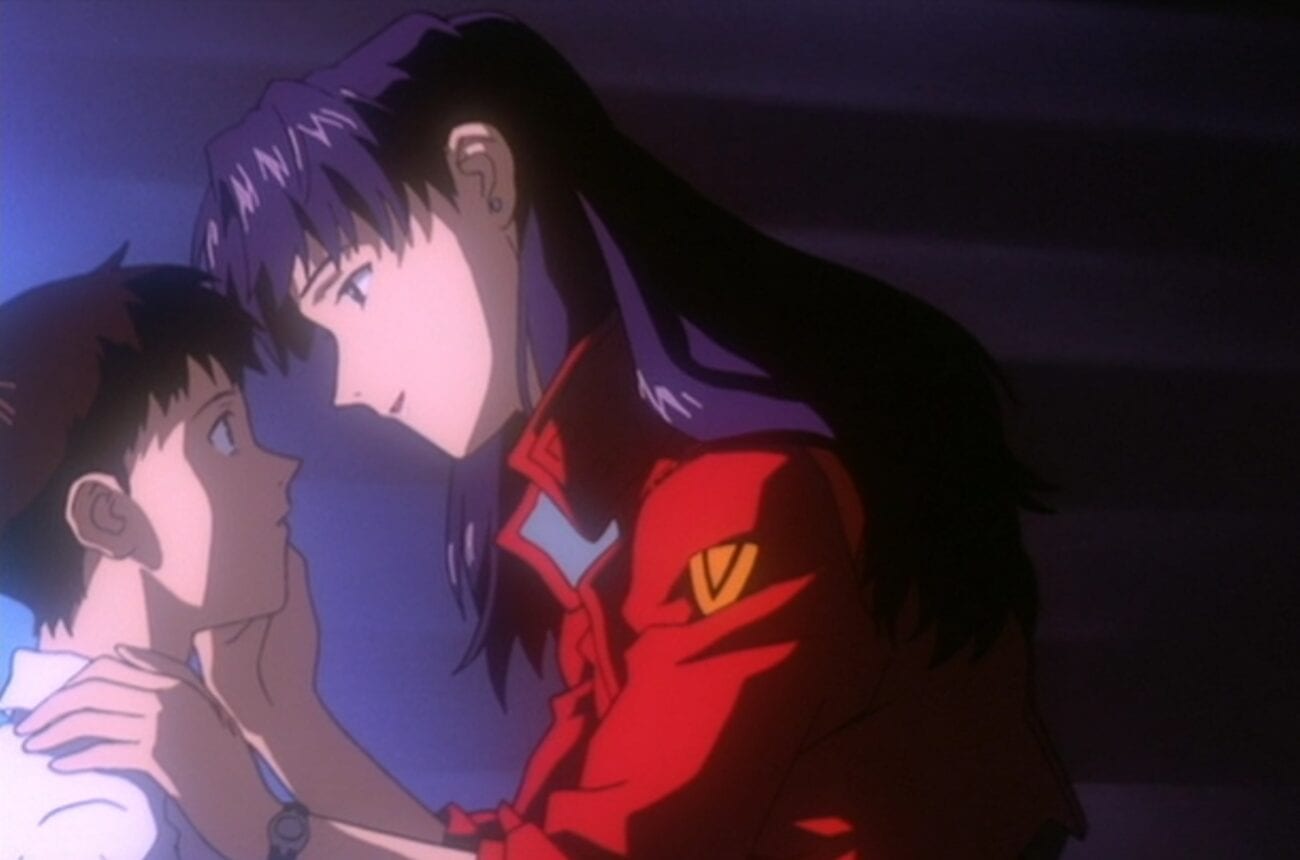 In many respects, Misato is a mentor figure to Shinji. Despite their very different personalities, they share some of the same hang-ups, most notably a deep-seated fear of getting too close to other people for fear of being hurt. Misato has just been living with her damage for a lot longer, and so she’s both more self-aware and better at coping. She’s the one who has guidance to give when Shinji needs it—sometimes in the form kindly words, but sometimes tough love, because lord knows Shinji does occasionally need a kick in the pants.

The point of all of this is that because their relationship doesn’t fit into any conventional archetypes of relationships, that means we as the audience aren’t bringing any emotional shorthand into our observations on their relationship. Not much about their dynamic can be taken for granted. They’re just two messed-up people who care about each other—friendship,in the broadest possible terms.

This friendship is almost never the subject of the storytelling, but rather the lens through which we view the rest of the story, which I think is the point. Like many things in Evangelion, there’s a kind of misdirection here, in which the most important part of the story is in the background or subtext. The desire for and fear of emotional intimacy is more explicit in their interactions with other people, but it’s subtly telling us a story about the two of them at the same time. 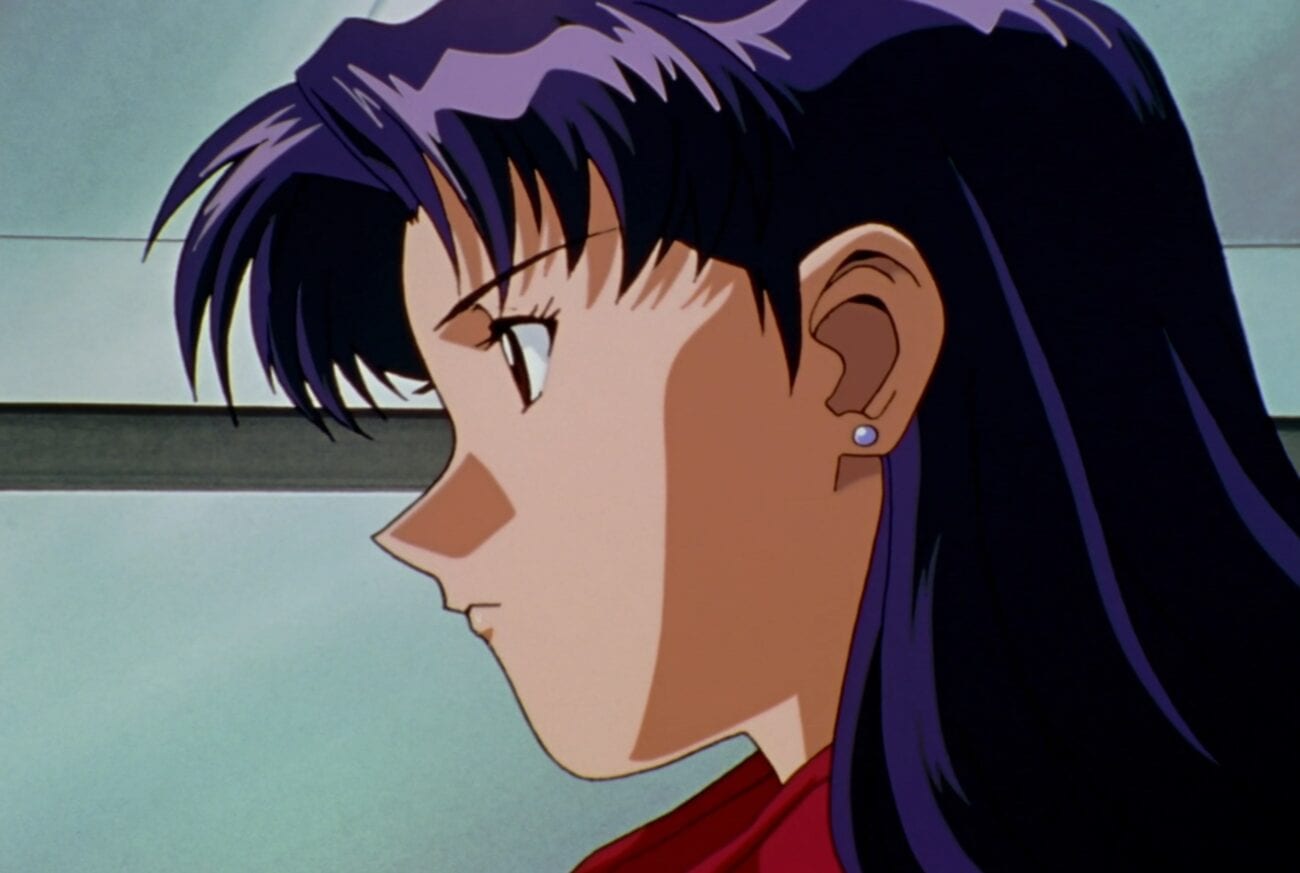 No, it’s only Episode 7 that puts them as a pair solely at the forefront, rather than either of them individually, or paired with other characters. This is the point when they’ve finally pushed past the learning curve of getting to know each other and cemented a partnership, based on trust and understanding. Not coincidentally, this episode brings in the part of the show where Shinji is at his most emotionally stable. His bond with Misato gives him an anchor, allowing him to feel more safe, and allowing the show to lighten up for a little while. The writing never draws attention to the connection between Shinji’s stability and his relationship with Misato, but the synchronicity is clear, especially once things start to go bad.

It starts with the one-two punch of Episodes 15 and 16. Episode 15 kicks off a subplot in which Misato looks into the secrets that NERV has been hiding from her—from which Shinji is excluded because Misato isn’t going to involve him in her illicit investigation. In Episode 16, Shinji is absorbed by the Angel Leliel and after hours of waiting for rescue while his life support runs out, he goes on an introspective journey culminating in a visit from the spirit of his mother. Misato is obviously excluded from this experience physically, but Shinji also never talks to her (or anyone else) about it, despite how intense and extreme an experience it is. 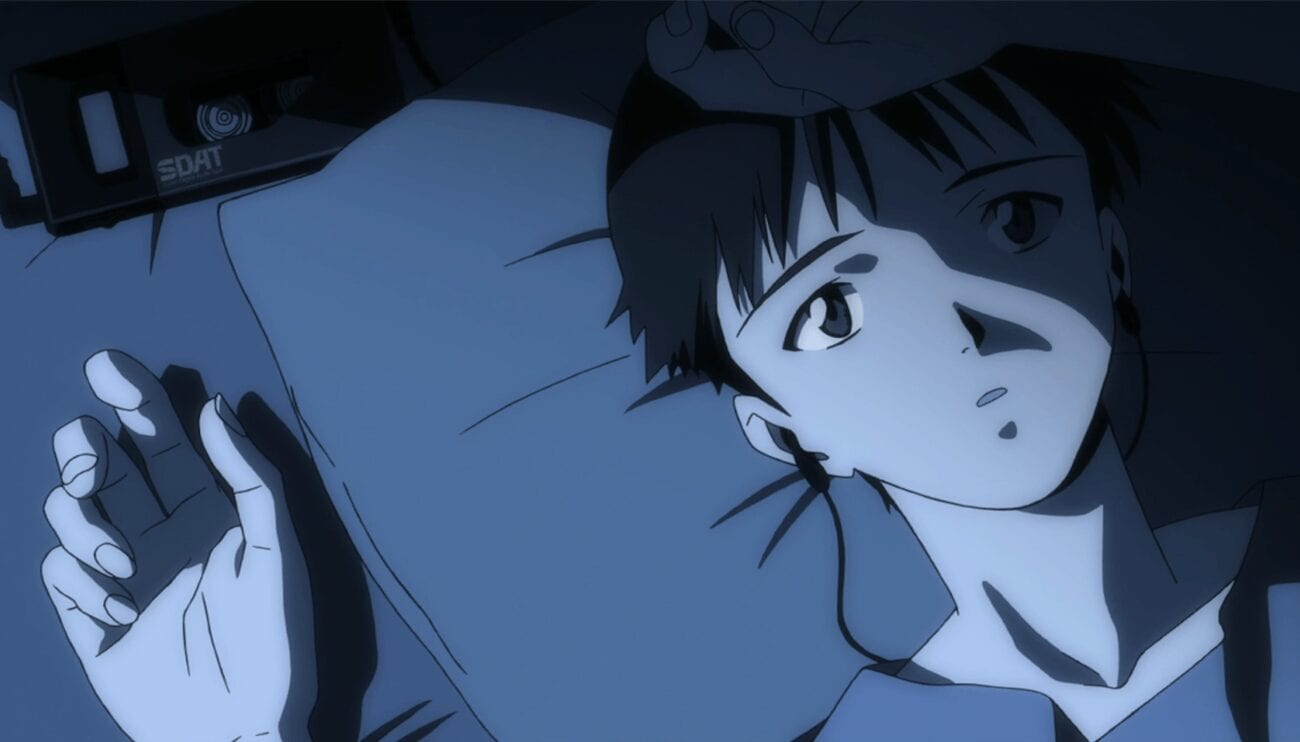 This is the beginning of the rift between them. As I’ve said, the show is almost never about their relationship, and so it’s not the kind of rift that comes with any kind of argument or sudden change. They still live together, they still work together, but there’s emotional distance building between them that only builds over the course of the rest of the show.

Shinji gets absorbed again, this time into his own Evangelion, and spends an entire month in an introspective dreamscape while Misato searches desperately for a way to bring him back—yet when he does come back, Misato’s next action is to seek comfort in Kaji’s bed, and Shinji once again doesn’t tell her anything about his metaphysical misadventure. Misato breaks into tears listening to Kaji’s last voicemail and Shinji stays in his bedroom, not understanding why she’s crying nor what he could possibly do to help her. Misato’s efforts to comfort Shinji after the deaths of his friends don’t even do anything for him because by this point he’s hurting too bad and they’ve grown too far apart. 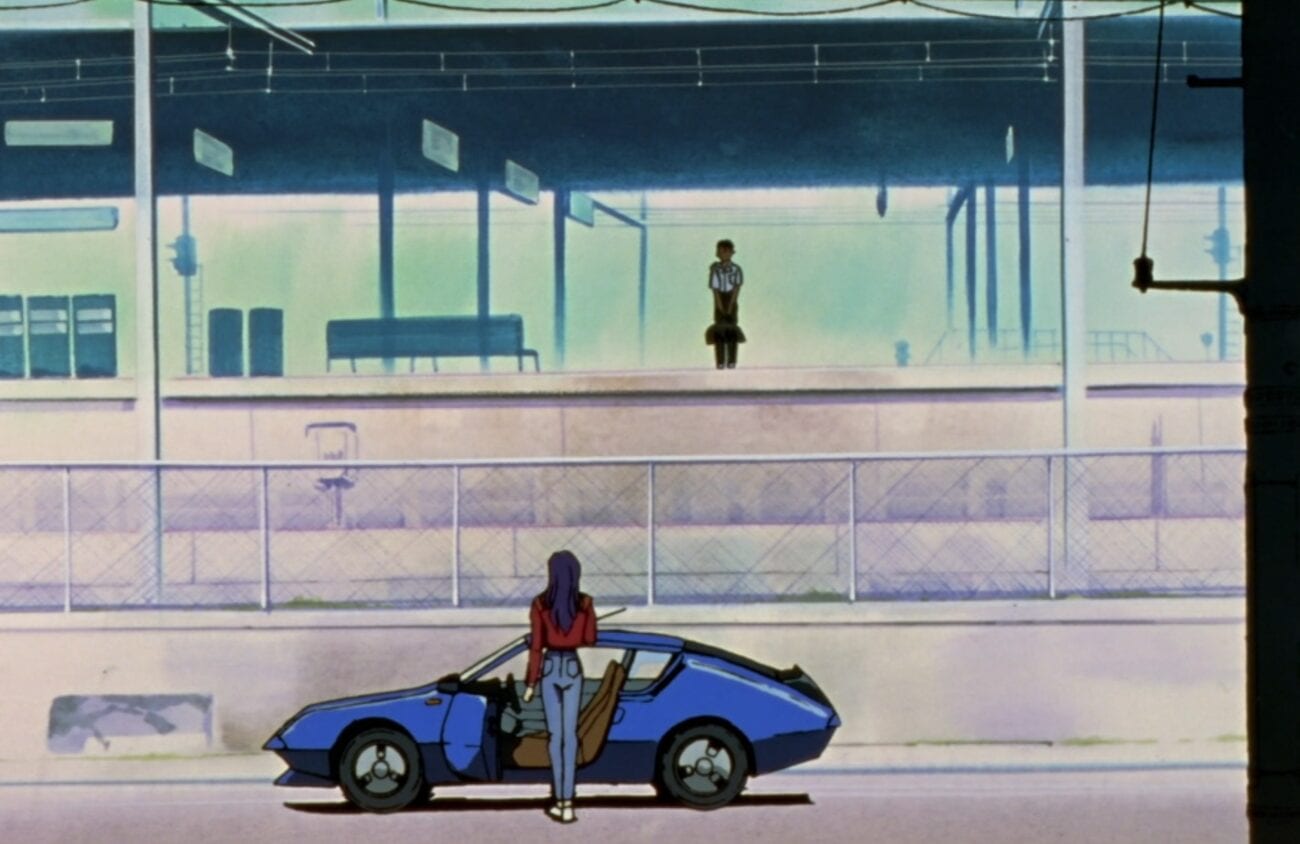 If I can get personal for a moment, (something I have trouble not doing when talking about this series) the struggle to understand and connect with other people is one that’s been especially prominent in my mind lately. Between a pandemic and a turbulent sociopolitical climate, our collective stress levels are through the roof, and that can make it especially hard to connect—even with the people we know and love the most. Sometimes this means proper hostility between friends or family, as manifests in most of the other relationships in Evangelion, but sometimes it’s a more nebulous problem than that.

Sometimes we’re Shinji in his room, hearing Misato sobbing in the living room, feeling too helpless to even offer a kind word. Sometimes we’re the people who are too afraid of being misunderstood to even try to get close to each other. But if Evangelion has taught me anything, it’s that however painful it may be to get hurt by the people close to you, it’s worth it just to have those people in the first place.