October 8th brought public exhibitions of Phyllidia Lloyd’s sublime drama Herself, Benjamin Ree’s tender and poignant documentary The Painter and the Thief, Tsai Ming-liang’s Days, which was not given a critics’ screening and Israeli rom-com Honeymood, which had its world premiere at the festival. Though the opening day of the festival’s screenings were devoted to English language releases, the fifth day of press screenings was committed to world cinema, bringing us films from Nigeria, Palestine, Iran and Israel, with screenings of new releases This is My Desire, 200 Meters and the long-awaited release of the lost 1976 Iranian classic Chess of the Wind.

A cynical Israeli rom-com from director Talya Lavie, Honeymood is a surprisingly investing and often skin crawlingly cringeworthy release for the 2020 London Film Festival. Premiering at the festival, the film follows two newlyweds (Ran Danker and Avigail Harari) who break off into the night from their wedding bed to return an inappropriate gift, and soon begin getting on the nerves of not only one another, but it must be said, the viewer as well. As the irritable, mismatched pair find themselves forced to revisit their past relationships, they start reweighing their options and realising how truly different they are from one another.

Despite how deeply flawed and often frustrating both characters, and the extended families they come into contact with are, I wasn’t able to bring myself to either laugh at their distress, nor fully condemn either one of them. Both of them do some highly questionable things, but I never really stopped rooting for them as a couple, if only because they clearly deserved one another.

The film occasionally dips into some moments of wild near-magic realism, with a bizarre and taut out of body musical number in the last third. Such diversions are a familiar trope to the ‘out-all-night’ subgenre, with canonical examples being Scorsese’s After Hours, Sebastian Schipper’s masterpiece Victoria and the extraordinary, and only occasionally wildly inappropriate anime, Night is Short, Walk on Girl. Honeymood rarely approaches the ambition of those works though, or even that of more mainstream efforts like Game Night or Late Night. Often the very pettiness of the characters and their situation is the point, and that’s where a lot of the frustration and indeed sympathy comes from.

When the inevitable third act separation occurs, it does feel a little too contrived, as if the characters are being punished maliciously, and its only at this point that the dynamic of audience sympathy does become one-sided, with the groom being the unilateral ass of the situation. For the most part the exhaustively prolonged sympathy between the two characters is neatly balanced, thanks as much to the strong performances from the well-cast leads Danker and Harari as to the acidic, sharply tuned script.

Due to its reliance on a narrow but rich vein of cringe comedy, Honeymood will likely be an acquired taste. However, the film’s underlying themes of aging, relationships and other life choices are relatable and well observed enough to ensure the film has a solid dramatic bedrock to build its character-based comedy on.

Eyimofe (This Is My Desire)

There has been somewhat of a proliferation of perspectives on migration in recent world cinema and one particularly noteworthy subset of films are those dealing with the experiences of those left behind. The perspectives of those communities whose population is dispersing to Europe in search of better financial hopes. Recent examples include Atlantiques, The Receptionist, Vitalina Varela and now directors Arie and Chuku Esiri’s two part anthology film Eyimofe. Mirroring the structure, and even tone, of a film such as Certain Women, Eyimofe is comprised of two halves, each following a different protagonist, and a short conclusory epilogue. 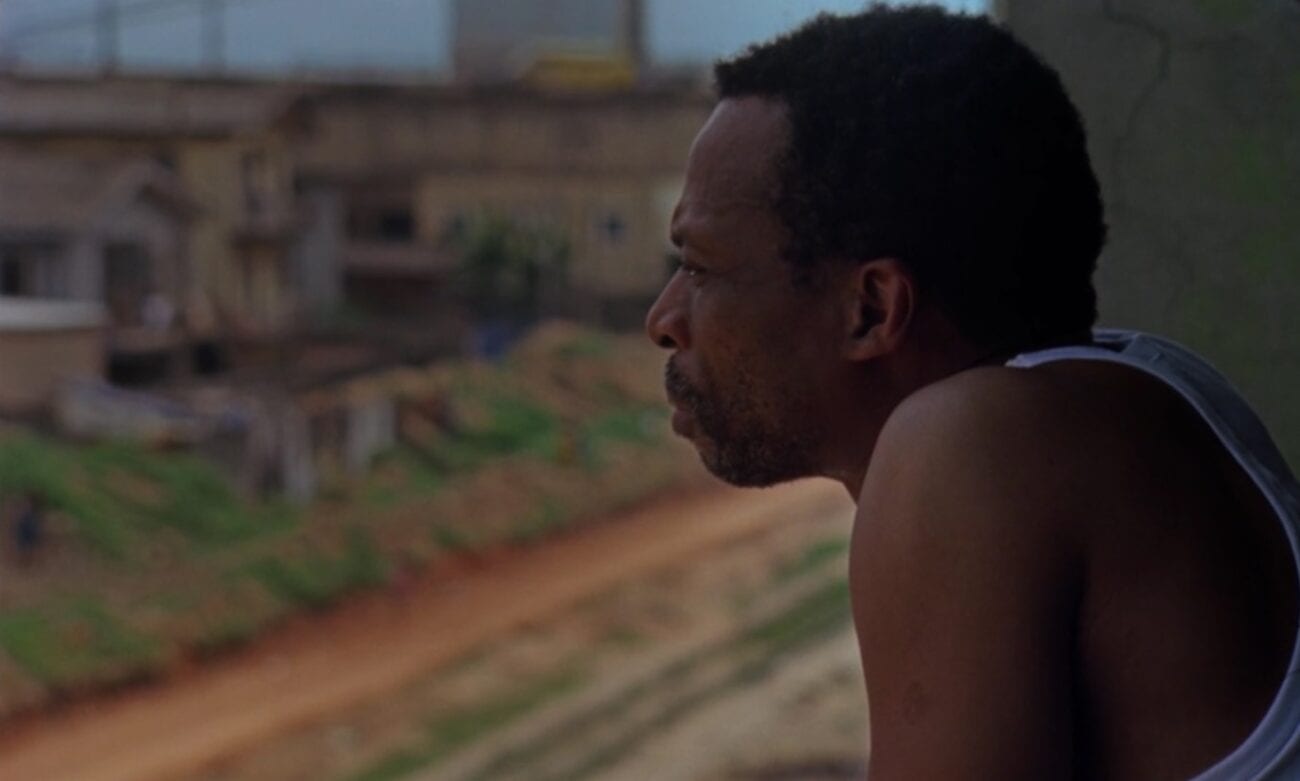 The first, and better, of the two stories follows Mofe (Jude Akuwudike) a nightwatchman and factory maintenance man living in Lagos with his sister and nephews, who is in the process of finalising his planned move to Spain. However, his designs of a new life are put on hold when tragedy strikes his family and he is left to pay the financial cost.

The second half centres around Rosa (Temi Ami-Williams), who is likewise working two jobs and living with her pregnant younger sister, and who entertains hopes of moving with her to Europe. Once again, despite Rosa’s being taken under the wing of a handsome American businessman, events beyond their control conspire to scupper their plans.

Both halves are set against a backdrop of gross wealth inequality, bureaucracy and political corruption and have a poignant and reflective tone that almost mirrors Ozu’s mono no aware: the mundane tragedy of a lifetime of compromise, though with a bitter edge of social realism. Both of these elements come through more strongly in the first half, built around a maddeningly careworn performance from Akuwudike and one cruel twist of fate after another. His exhausted reserves of patience and positivity are written with such perfect pathos that by the time the film reaches its poignant and mutedly optimistic ending, a cleanly pressed new work shirt feels almost like a triumph.

The directorial debut of filmmaker Ameen Nayteh returns us to Israel and the West Bank and to the themes of transit and borders. Mustafa (Ali Suliman) lives in Palestine, just 200 metres from his wife (Lana Zreik) and children in Israel. Their homes are plainly visible from each other’s windows, but are separated by the wall. Their lives are a constant, dangerous cycle of checkpoints, documentation and phone calls. So when his son is suddenly admitted to hospital, a desperate Mustafa, his pass having expired, is forced to make a perilous 200 mile journey to visit his family.

The first act of this generally taut dramatic thriller is admittedly rather slow to get going, but the film finds its feet once the journey gets going. The dynamic tension between the characters takes over once Mustafa finds himself shut up in a minivan with a group of potentially untrustworthy strangers, all making the clandestine crossing for their own reasons. The small community that develops includes, besides Mustafa, a filmmaker from Germany (Anna Unterberger), whose documentation of the journey raises tensions among the group.

Mustafa’s frustrations at the journey, with each moment of delay keeping him from his son’s bedside could have been handled better. It’s late in the game that we actually discover what has happened to his son so the filmmakers could have sutured the viewer into his emotions better. Presumably this was done to preserve the distanced and pragmatic perspective of the film, but Mustafa’s personal concerns and outlook already serve this function quite well, cutting down into the human cost of an everyman placed in an untenable situation. Through this approach 200 Meters maintains a touching balance between family togetherness and the absurdity of division, neatly articulated by its central image: a father waving goodnight to his children over the phone.

Chess of the Wind

The final film of the day bid a welcome return to a long-lost glittering gem of world cinema, the gothic Iranian drama Chess of the Wind. Screened only once before in 1976 at the Tehran International Film Festival before being banned by the Islamic regime, Chess of the Wind was believed lost until the original negatives were discovered in an antique shop in 2015 and returned to the film’s director Mohammad Reza Aslani.

The film was eventually given a stunning looking 4K restoration by The Film Foundation’s World Cinema Project and Fondazione Cineteca di Bologna using those original 35mm camera and sound negatives at Paris’s L’Image Retrouvée laboratory in collaboration with Aslani and the original cinematographer Houshang Baharlou. The resulting footage seems to have hardly aged a day and is a gratefully received opportunity to view the macabre gothic ghost story of haunting guilt and vaulting ambition as well the screen debut of actor Shohreh Aghdashloo (House of Sand and Fog). 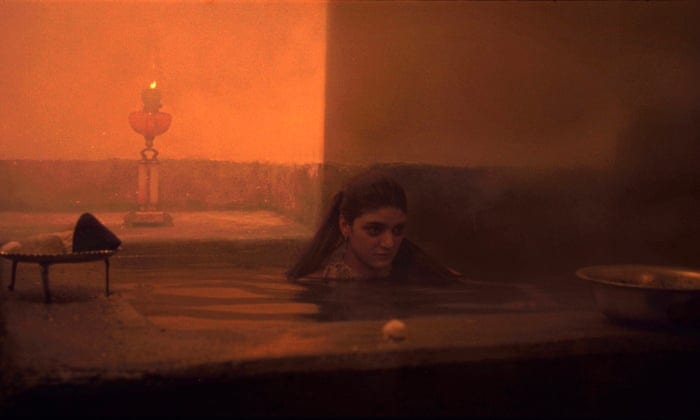 Equal parts Tennessee Williams, Shakespeare and Hitchcock, the story centres around a wealthy and bitter family of industrialists who, following the death of the matriarch, descend into murder and mistrust in their battle for her inheritance. The new head of the household is the late mother’s husband and brutal stepfather to her children, and between them, her lesbian wheelchair-using daughter, her unwelcome suitor and her devoted young maid concoct a plot to rid themselves of the tyrant. It’s a chilling and deliciously malevolent slow-burn riff on Henri-Georges Clouzot’s Les Diaboliques, shot in often lush sepia colour and scored by both the clamorous alarums of Sheyda Gharachedaghi and a gossiping Greek chorus of washerwomen.

It’s a stunningly brave effort for an Iranian film of the 1970s, seething in forbidden sexuality, social critique of Iran’s antiquated social strata, and sudden violence, with bodies in oversized bell jars dissolved in acid and seemingly rising from the dead, as Baharlou’s camera creeps insidiously from room to room. Despite its slow pace, its consistently claustrophobic and sensuous tone is frequently intoxicating and unforgettable, as its brilliantly drawn, finely starched characters descend into near mania of guilt and jealousy, and all is capped off with a deliciously satirical final shot.