When Labo VR released for the Nintendo Switch, I was hopeful that we’d see a flood of games from third-party and indie developers utilising the cheap and cheerful peripheral. Alas, that didn’t really happen. In fact, at the time of writing, only three games on the Switch eshop include LABO VR support. I’ve been keen to dust off my own cardboard headset, so I decided to check out one of these games—Rooms: The Adventure of Anne & George. Developed by HandMade Game, Rooms: The Adventure of Anne & George is a successor to the obscure 2010 Wii/DS puzzle game, Rooms: The Main Building. This new entry contains the same basic style of tile-sliding puzzles but utilises a new art-style, setting, and characters as well as a wealth of new gameplay mechanics. 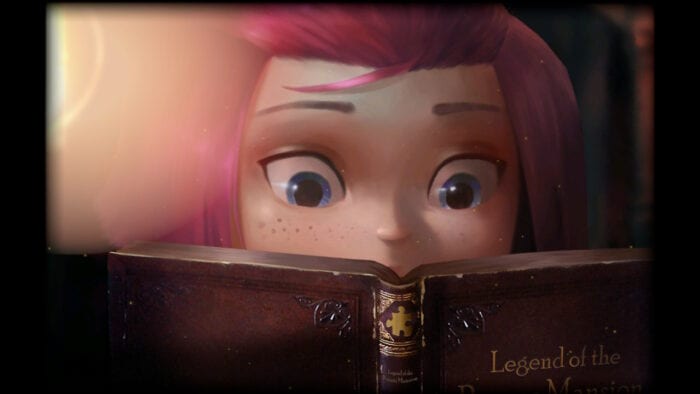 The story begins as a young girl named Anne reads a fairy-tale of a legendary toymaker. The toymaker had found fame and fortune with his ingenious inventions but then became increasingly reclusive in his mansion—supposedly hiding a deep, dark secret. One day, the toymaker and his mansion vanish into thin air, never to be seen again. As Anne reads on, she is startled by a loud noise outside. Lantern in hand, she steps out into the night to discover the toymaker’s mansion before her. Curiosity gets the better of her and she decides to enter—only to find that escape is harder than it seems.

The introduction perfectly sets the tone for the game’s dark, fairy-tale feel. The visual style and music perfectly match the setting too, seemingly inspired by the stop-motion films of Henry Selick and Tim Burton—albeit with a budget feel. The story is told both through still cut-scenes, and in dialogue between Anne and her (now sentient) lantern during the game’s levels. I was surprised at how engaging the story was for an indie puzzle game—I certainly felt compelled to battle through many head-scratchers just to see it unfold. And head-scratch I did—a great deal in fact.

There are four levels of the mansion to work through, each containing 24 unique puzzles. As I mentioned earlier, the core gameplay is that of a sliding-tile puzzle game, but in Rooms: The Adventures of Anne & George the specific goal is to guide Anne to the exit. Each puzzle is composed of a series of square rooms that, once inside, Anne can manipulate by moving up, down, left, or right. Anne, herself can only move between rooms that are connected horizontally, and only if there are no walls or locked doors in the way. Some rooms however contain a ladder that enable her to climb up to a room above.

Though the core gameplay is straightforward, increasing layers of difficulty are continually added through new gameplay mechanics. Phones are used to teleport Anne between rooms, magnets are used to push and pull adjacent rooms, mirrors tie the movements of certain rooms together, clocks are used to rotate rooms, closets switch the layout of rooms—these layers of complexity ensure that the puzzles never feel repetitive.

The game does a good job of introducing each new concept too. Puzzles start out small in scope, requiring only a handful of moves to complete. By the time an idea is fully realised it may take upwards of 25 moves to complete—not to mention the uses of any objects such as bombs, magnets, closets etc. While the smaller puzzles can be figured out purely with logic, the more complex puzzles require a little more trial and error. To guide you, rooms are coloured in when they are in their correct final position. As well as this, you can view the lantern’s hint to show the shape of the final layout. With so many other variables involved however, these clues are limited in their usefulness.

In the bottom left corner of the screen is a counter which shows how many moves you have remaining to complete the puzzle as it was intended. If you complete the puzzle perfectly you will be awarded three golden puzzle pieces, and any additional moves will reduce the golden puzzle pieces down to two, and eventually one. Simply completing the level is enough to unlock the next, but completionists will be compelled to fill the golden arch of puzzle pieces above each door in the level select screen.

Doing so is easier said than done, however. It took me over 15 hours to complete the main story mode, having abandoned hope of 100% completion towards the end of the third area of the mansion. I assume this is why I received the ‘bad’ ending—which is genuinely quite dark and disturbing. As much as I’d love to see the true ending, some of the later puzzles had me utterly stumped and I found myself increasingly adopting something of an ‘infinite monkey’ approach.

Annoyingly the game is obscure enough that I couldn’t find an online walkthrough to put me out of my misery. Or so I thought. As it turns out, the game has also been released on Android, IOS, and PC as, Rooms: The Toymaker’s Mansion and on Playstation 4 as Rooms: The Unsolvable Puzzle. Seemingly the game was more successful on these platforms as I was able to find full walkthroughs—though I did notice some differences in the puzzles between versions. The game is PSVR and Oculus Rift compatible which certainly explains the unusual addition of Labo VR support. The Switch version of the game is unique in that it contains a co-op mode—hence the title, The Adventure of Anne & George. 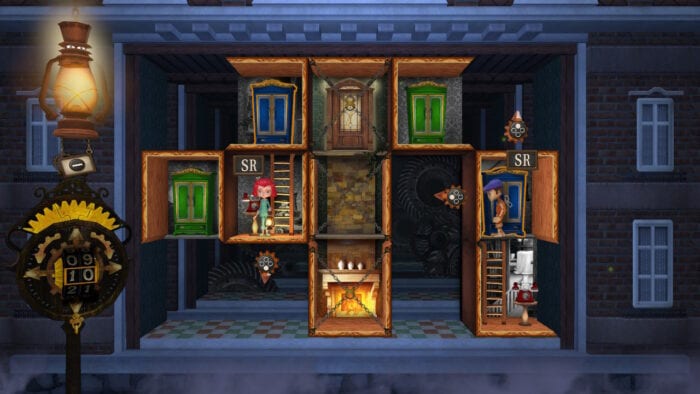 George is a clockwork, sentient puppet who is stuck in the attic of the toymaker’s mansion. Together with Anne, the pair try and work together to escape. This co-op campaign is effectively a shortened version of the story mode that contains unique two-player puzzles. It’s not for the faint of heart, as the extra character adds a huge amount of variability to the puzzles—not to mention the fact that George has been booby trapped to explode if he and Anne inhabit the same room. I’ve been playing through it with my wife, and we’ve been relishing the challenge so far, but I’m sure it wouldn’t be for everyone. In any case, it’s a very welcome addition to the already generous content.

Additionally there’s also a set of ‘expert’ basement levels, which I haven’t dared to touch yet (for fear of losing my sanity). Perhaps if I ever manage to 100% the main story, I’ll give it a try but, as I mentioned, I’m finding plenty of challenge in that already. 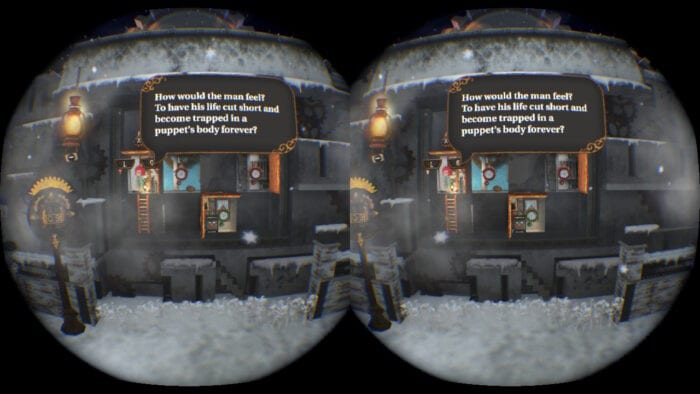 In terms of the Labo VR functionality, it’s actually pretty good. In fact, outside of the LABO VR games themselves, it’s the best use of the peripheral I’ve encountered. The main menu shows Anne, lantern in hand, nervously looking up at the imposing, endlessly twisting, mansion. Here you can move your head to look around the grounds, or up at the starry sky. This view extends to the gameplay itself, as the puzzles appear within the side of the mansion itself. Cutscenes too, are projected on the mansion’s wall in this mode. It’s a brilliantly thought out design, that makes for a near seamless and immersive experience. The 3D effect adds a nice depth perception to everything too, making it almost like peering into a doll’s house.

The only negative aspect is due to the low resolution of the Switch itself, which results in jagged-edges, and blurry text. It’s unlikely that anyone would want to play the whole game in this manner, but regardless, it’s a very welcome addition.

Overall, I’ve been thoroughly taken by Rooms: The Adventure of Anne & George. The story is dark, intriguing, and well written. The visual style, though a little reminiscent of a DS-era game, is thematically strong—as is the sinister, music-box-esque soundtrack. The puzzles are immaculately designed, and consistently innovative and, as the game progresses, deviously challenging. It’s an easy game to recommend for anyone who has any tolerance for sliding-tile puzzles (though I’m aware that rules out quite a few people). It’s a wonderfully generous game for the money too, with a solid VR mode, co-op campaign, and over a hundred puzzles to solve. If you’re looking for a good head-scratcher of a game, then take a peek inside Rooms: The Adventure of Anne & George. Just be careful, you might find yourself getting lost within.